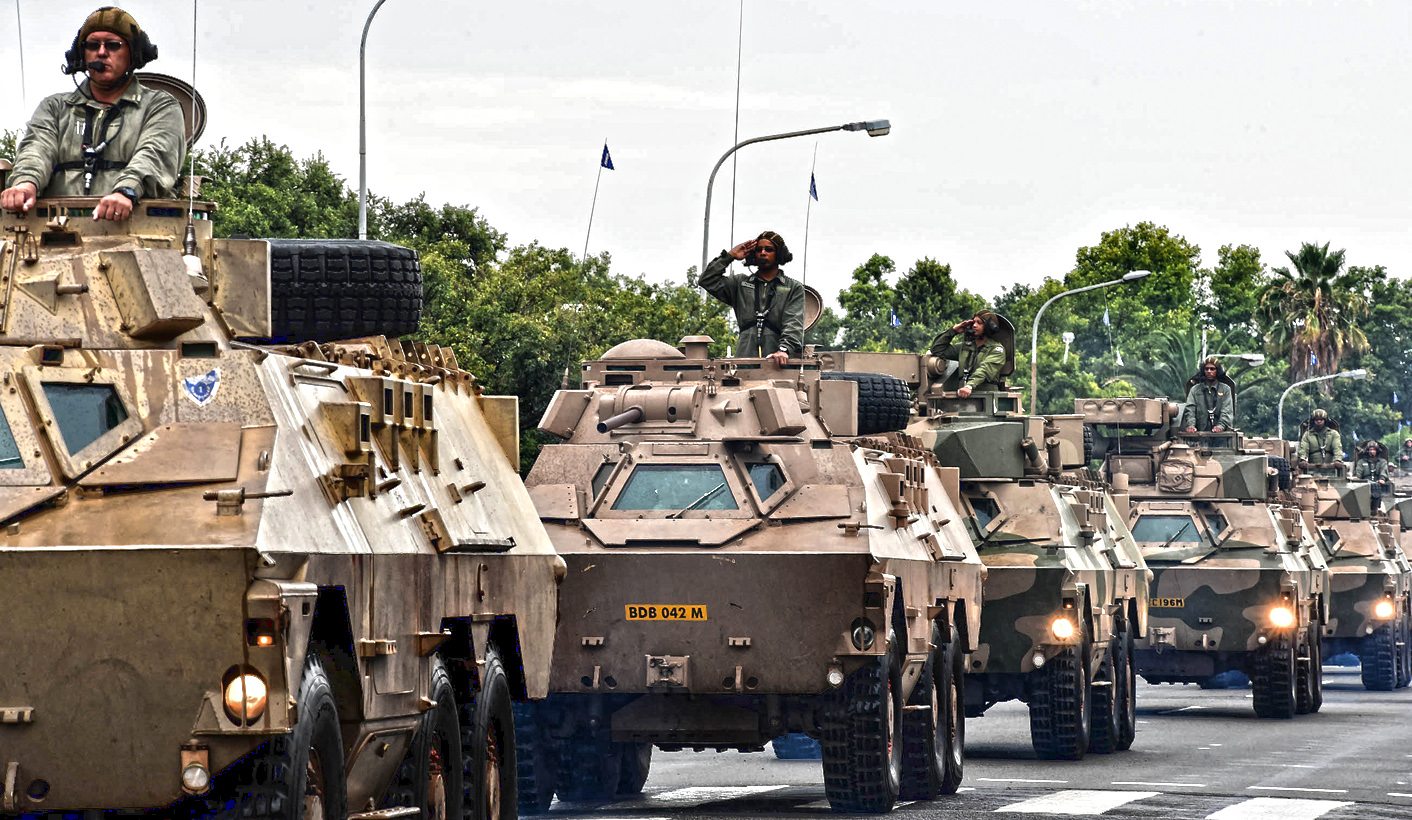 South Africa’s new defence policy is modelled on America’s infamous campaign to “win hearts and minds” in Iraq and Afghanistan. It didn’t work for America, and it’s not going to work for us either. SAVO HELETA examines why it’s so dangerous to blur the lines between defence and development.

South Africa is readying itself for US-style engagement in war zones and post-conflict environments. The South African National Defence Force (SANDF) plans to engage in peace-making and stabilisation in Africa using the American and NATO approach known as ‘winning hearts and minds,’ with country’s soldiers roaming around the continent with a gun in one hand and humanitarian and development aid in the other. This is according to the South African Defence Review 2014, the country’s new defence policy.

In Iraq and Afghanistan, the US and NATO have incorporated humanitarian and development work into military strategies, with the soldiers often acting as ‘armed humanitarians.’ This has had negative consequences for neutrality and impartiality of aid workers and has led to numerous incidents where international and local NGOs, development and aid agencies working in these conflict zones were not seen as neutral but the same as the occupying forces. Consequently, many development and aid workers have been targeted and killed by the ‘insurgents’ who saw them as enemy collaborators and spies.

It is alarming that South Africa wants to do the same in Africa.

The promotion of stability and peace in Africa is a key priority of South Africa’s foreign policy. According to the Defence Review, South Africa will contribute to the prevention and resolution of conflict in Africa ‘through an integration of its diplomatic, military and other efforts, in a complementary manner, and in instances supported by appropriate military capabilities, that strengthen South Africa’s capacity to influence international developments.’ South Africa’s regional and continental involvement is informed both by the responsibility to support conflict management, peace-building and reconstruction efforts in Africa as well as the country’s geopolitical, security and economic interests.

The Defence Review stresses that the SANDF is currently ‘too poorly equipped and funded to execute the widening spectrum of tasks to the desired level.’ Due to this, the army is struggling to sustain the deployment of soldiers who participate in peace missions across the African continent. At the same time, the Review has proposed – and the South African government has approved in March 2014 – the expansion of the SANDF’s roles and responsibilities in peace missions to include tasks which should never be performed by soldiers/peacekeepers.

According to the Defence Review, South African soldiers will be involved in the provision of ‘critical humanitarian assistance and reconstruction capabilities during and immediately after military operations’ in Africa’s war-torn countries. This will be done in order to ‘enable and reinforce the process of development and reconstruction.’ This is the first major problem with the new defence policy related to South Africa’s contribution to continental peace and stability. The Defence Review committee does not seem to understand the fundamental difference between the provision of humanitarian assistance by the SANDF within the borders of South Africa, or in cases of environmental disasters in the neighbouring countries which ask for assistance, and the provision of humanitarian assistance by the South African soldiers in countries ‘characterised by fragile ceasefires or peace agreements, periodic if not endemic violence, and more general state weakness or collapse,’ as pointed out in the Review.

The humanitarian and military actors profoundly differ when it comes to their training, skills, aims, objectives, mandates, operational methods and institutional thinking and cultures. Given these differences, humanitarian workers and agencies and their work must remain distinct from that of the armed forces in order to avoid association with military or political agendas that could compromise humanitarians and their independence, credibility, security and access to affected populations.

If the SANDF peacekeepers do get involved in humanitarian work, they are likely to endanger the humanitarian spaces and workers in countries in which they deploy. In turn, instead of helping bring peace, stability and relief to Africa’s conflict-affected countries, they will compromise the work of humanitarians and prolong the suffering of the people in need.

The second major problem with South Africa’s new defence policy is the plan to engage in ‘developmental peacekeeping’ in Africa’s war-ravaged countries without understanding what developmental peacekeeping is. While discussing the SANDF’s developmental contribution, the Review notes that the ‘defence can contribute greatly to socio-economic development by employing its diverse capabilities, such as its planning capability, in parallel with peace-operation forces.’ The SANDF’s ‘diverse capabilities’ for socio-economic development are questionable even in the South African context, let alone in other countries. The army, which according to the Defence Review is in a ‘critical state of decline’ and is facing a myriad of problems, including the high HIV/AIDS infection rates, skills and equipment shortage, ill-discipline and an aging soldier population, has a very limited capacity to meaningfully assist South Africa’s much needed development and growth, let alone ‘greatly’ assist social and economic reconstruction and development in Africa’s post-conflict countries.

Writing about ‘developmental peacekeeping’, Nozizwe Madlala-Routledge and Sybert Liebenberg point out that post-conflict reconstruction takes place ‘in synergy with peacekeeping and peace-enforcement. On a practical level this would mean that post-conflict reconstruction practitioners and resources are deployed alongside peacekeepers.’ This is an important point that the writers of the Defence Review do not seem to understand. Peacekeepers are not supposed to be involved in socio-economic reconstruction and development efforts; these are responsibilities of local and international development organisations and agencies as peacekeepers do not have skills and expertise for these complex endeavours. The main objective of peacekeeping is the creation of a safe environment that allows socio-economic reconstruction and development to take place. This cannot be done by foreign soldiers but by local and international economists, development experts, engineers and others.

Establishment of stability and peace after violent conflict is an intricate and long process. It is puzzling that the Defence Review committee, the Department of Defence and finally the South African government which approved the new defence policy would envisage the SANDF being involved in humanitarian assistance and socio-economic reconstruction and development in Africa’s complex crises. It is even more puzzling that this irresponsible and misguided thinking is part of a defence policy that will steer the SANDF in the next few decades.

The Defence Review took three years to complete. One would expect this to be enough time to come up with a sound policy document in all its aspects. However, this somehow was not enough time to consult the important literature and documents such as the UN’s Civil-Military Guidelines and Reference for Complex Emergencies (2008) or the Revised White Paper on South African Participation in International Peace Missions (2012). Unlike the Defence Review, the White Paper does not consider the provision of humanitarian assistance as a role of the SANDF. Instead, and rightly so, it tasks the SANDF with the creation of humanitarian space. Furthermore, the public consultation needed to take seriously the submissions from experts, researchers, academics and concerned citizens. If this was done, some of the shortcomings in the new defence policy could have been avoided. This author presented a working paper to the Defence Review committee in Port Elizabeth in July 2012, asking the committee to reconsider the SANDF’s involvement in humanitarian assistance and reconstruction given the controversies related to this. Needless to say, this contribution was ignored.

The SANDF’s proposed involvement in humanitarian and reconstruction work is deeply flawed and unjustified and goes against the international principles which South Africa has endorsed. If implemented, this will put the lives of innocent people in danger around the continent. The humanitarian work in Africa should be left to humanitarian and aid agencies while reconstruction and development should be left to organisations such as NEPAD, South African Development Partnership Agency (SADPA), continental and international development organisations and local actors. DM

Photo: Soldiers participate in a parade at the Armed Forces Day held in honour of the country’s military forces in Potchefstroom, North West on Saturday, 21 February 2015. Picture: Department of Communications (DoC)/SAPA

Savo Heleta works at Nelson Mandela Metropolitan University (NMMU) in Port Elizabeth, South Africa. He holds a DPhil in Development Studies from NMMU. His DPhil research focused on post-war reconstruction and development in Bosnia, South Sudan and Somaliland. Originally from Bosnia where he lived through the civil war in the 1990s, he is the author of Not My Turn to Die: Memoirs of a Broken Childhood in Bosnia (2008). Savo is on Twitter under @Savo_Heleta. The author writes this op-ed in his personal capacity. The views and opinions expressed in this op-ed are those of the author and do not necessarily reflect the opinions of his employer.