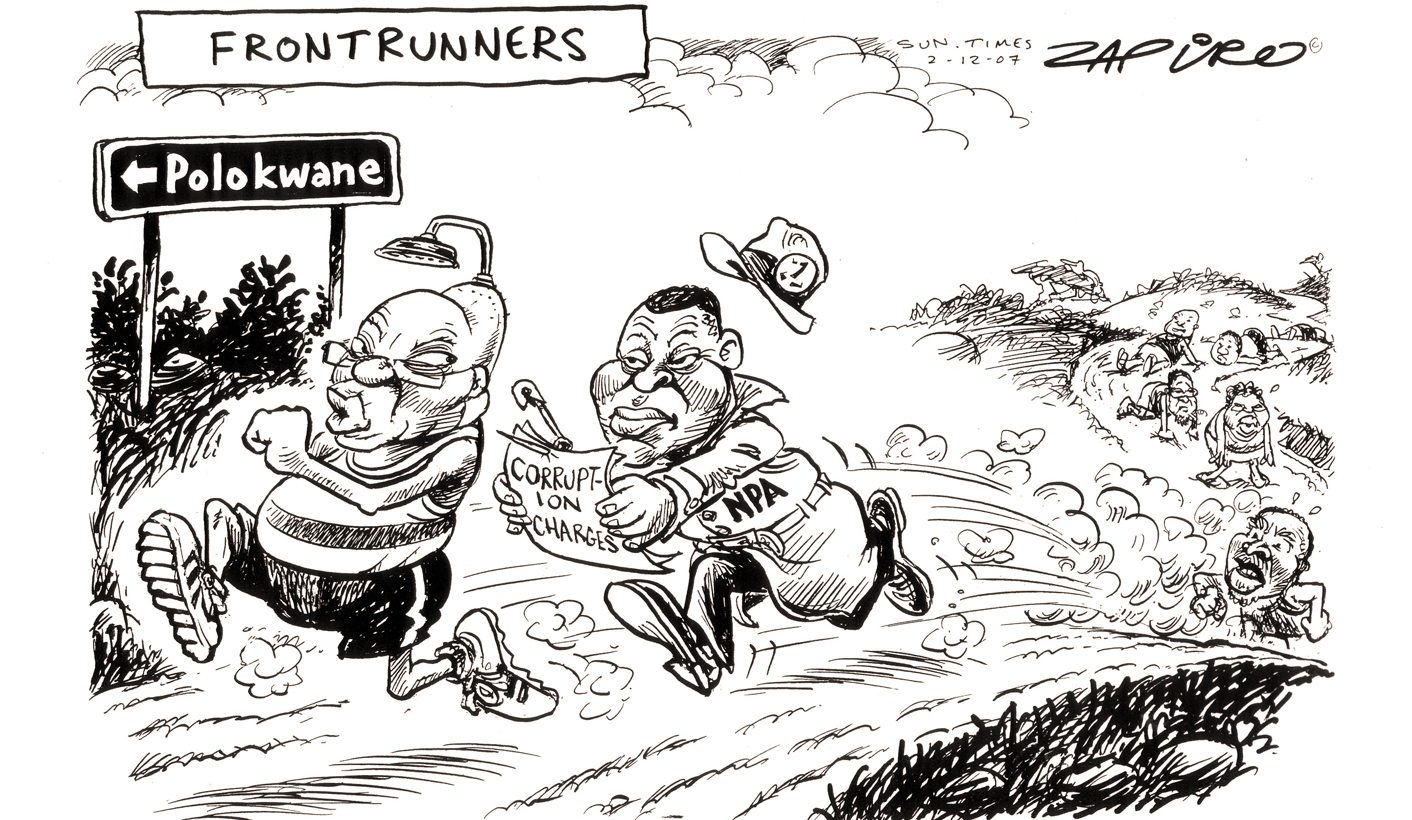 Billy Downer, the senior advocate who led the NPA team investigating charges of racketeering, corruption, fraud and money laundering against Jacob Zuma, has submitted an affidavit bolstering considerably the DA’s “spy tapes” court challenge aimed at reinstating the charges. Downer’s statement reveals the team believed in the reasonable prospects of a conviction and that intercepted conversations between DSO head, Leonard McCarthy and NDPP Bulelani Ngcuka ultimately did not affect the merits of the case. By MARIANNE THAMM.

In his confirmatory affidavit, filed in the Pretoria High Court on Monday and in support of the DA’s challenge that the decision to drop corruption charges against Jacob Zuma was “irrational”, politically motivated in not legally sound, Downer reveals that it was a cartoon by Zapiro that prompted the then acting head of NDPP, Mokotedi Mpshe, to delay the prosecution of Zuma until after the ANC’s 2007 watershed conference in Polokwane.

“On 6 December 2007, Mpshe telephoned me and told me that although he was satisfied with the draft indictment, he had decided to delay the prosecution until the following year because he did not want the NPA to be seen to be responsible for Zuma failing to be elected as ANC President at Polokwane. He said that he had come to the conclusion after seeing a cartoon in which Zuma was depicted as running in a race with Mbeki. The cartoon depicted the NPA tripping up Zuma,” Downer states.

Two years later, on 1 April, 2009, Mpshe announced that the alleged manipulation of The Directorate of Special Operations (DSO) head, Leonard McCarthy, by suspended NDPP, Bulelani Ngcuka, (and supposedly in the interests of a conspiracy orchestrated by President Thabo Mbeki in order to thwart Jacob Zuma’s political ambitions) had “compromised” the integrity of the NPA and the Zuma prosecution thus rendering the criminal case untenable.

It was the “leaked” intercepted conversations by crime intelligence between McCarthy and Ngcuka that found their way (via the National Intelligence Agency’s deputy head, Arthur Fraser) to Jacob Zuma’s lawyer Michael Hulley which led, in part, to Judge Chris Nicholson granting, in 2008, Zuma’s application to have corruption charges dismissed.

Downer’s throwing his weight behind the DA’s case on Monday is significant also in that his statement contradicts a 153-page answering affidavit filed in March this year by Deputy National Director of Public Prosecutions, Willie Hofmeyr. In this Hofmeyr claims that it was McCarthy and not Mpshe (as Downer claims) who had decided on the timing of the institution of Zuma’s prosecution.

Hofmeyr claims that McCarthy had done so (at the behest of Mbeki) and had believed that delaying the charging of Zuma would be detrimental to his bid for ANC president in competition with Mbeki.

Downer, who led the Bumiputera team (as the Zuma prosecuting team was known) and was also the chief prosecutor in the Schabir Shaik trial, said that the team was opposed “to the decision to discontinue the Zuma prosecution” and had maintained the only real consideration was whether there were merits in the charges.

“In our view, the intercepted conversations did not affect the decision to charge Zuma. My view remains unchanged,” his statement reads. Downer added that Hofmeyr’s “charges are not recorded accurately”.

The team, said Downer, reported to McCarthy and took instructions from him and that in the opinion of the prosecuting team, the NDPP had the statutory power to institute a prosecution.

“Previous NDPPs had made decisions to institute prosecutions, including a decision to prosecute Zuma. In practice, previous NDPPs had made the decisions to prosecute corporatively. By this I meant that the Investigating Director had made the formal decisions and signed the indictments in his name, in consultation and with the concurrence of the Head of the DSO and the NDPP, after a process that always included extensive consultations with the prosecuting team.”

Downer states that the prosecuting team did not support the August 2003 decision by the then National prosecutions head Bulelani Ngcuka that there was a prima facie case of corruption against Zuma, but he would not be charged alongside his financial adviser Schabir Shaik.

“I confirm that I urged Ngcuka to prosecute Zuma. I did so on the basis of the prosecution team’s assessment of the strength of the evidence against him. The prosecution team believed that there were reasonable prospects of success.”

Downer reveals that in 2001 he had told Ngcuka that he believed his refusal to authorise the prosecution team to search Zuma’s residential and business premises “was politically motivated and designed to protect Zuma.”

He confirmed that Hofmeyr had told him that he had heard that the decision not to prosecute Zuma was part of a political deal to protect Zuma against prosecution “in exchange for leaving politics” but that he regarded this “as no more than an unconfirmed gossip”.

On 17 June 2005 the prosecution team briefed new NPA head Vusi Pikoli and McCarthy on the prospects of a successful prosecution of Zuma on charges of corruption and three days later Pikoli informed the team of his decision to go ahead with the prosecution.

“I do not agree that Pikoli did not have the authority to make a decision to institute a prosecution against Zuma,” wrote Downer.

In November 2007 Downer was present at a meeting between Mpshe, the deputies and McCarthy at which it was agreed that the decision to prosecute Zuma should be left to the head of the DSO (McCarthy) and the investigating director, Thanda Mngwengwe.

“I did not understand this to mean that the NDPP was excluded from the Zuma prosecution decision. He was also required to authorise the inclusion of racketeering charges in the indictment and the centralisation of some of the charges which necessitated assessing the merits of the predicate offences.”

That same month McCarthy had raised the possibility of delaying the decision to prosecute Zuma until after Polokwane, but Downer had disagreed.

At the end of that month Hulley filed papers with the Constitutional Court that the search and seizure raids by the Scorpions had invaded Zuma’s constitutional rights to privacy and dignity but Downer said the application did not impact on the readiness of the prosecution team or whether it could use material that had been seized in searches that were the subject of litigation.

He said that neither McCarthy, Hofmeyr nor anyone else had told him that McCarthy had lobbied them to delay the prosecution.

Towards the end of November 2007 the team applied to Mpshe to authorise the centralisation of charges and met with Downer and MCarthy in Cape Town to discuss the prosecution. The prosecution team also worked on a report for the Minister of Justice (Brigitte Mabandla).

When Mpshe phoned him on 4 December 2007 to discuss aspects of the report, Downer said he had been shocked to learn that the decision to charge Zuma “might be done after Polokwane”. Later Mpshe had telephoned him again and had cited Zapiro’s cartoon as an excuse for delaying the prosecution.

“I was becoming increasingly uncomfortable about how accurately to describe our Constitutional Court papers and defend generally a decision that had been taken in principle but which could not be finalized and announced until Mpshe as the NDPP had made up his mind to give the go-ahead.”

“The team believed that the timing of the announcement was very significant and may have held far-reaching consequences,” writes Downer, adding that the team’s disquiet was “premised on the delay being, or being seen, to be protecting Zuma for no good prosecutorial reasons.”

Prosecutors had felt so strongly about the matter that they had initially decided to resign in protest but had reconsidered this in the interests of the NPA.

At the end of December 2007 McCarthy had telephoned Downer and had told him that Mpshe had wanted Zuma to be charged urgently. On 21 December, McCarthy had given the go-ahead and the final indictment had been prepared on 24 December.

By March 2008 the issue of the “spy tapes” had broken and Downer said the team were all shocked by the contents of the recordings as these had cast a serious doubt on McCarthy’s integrity.

“I was reduced to tears,” writes Downer, adding that notwithstanding the contents of the tapes, the prosecution team remained convinced that “Zuma’s representations for the prosecution to be discontinued should have been declined”.

Downer said he was also of the opinion that while he was concerned about the source of the recordings, he believed that Zuma would have encountered difficulties “had he attempted to rely on the recordings in his application for a permanent stay of prosecution”.

Downer ends his statement by saying that McCarthy later refused to take his calls but that he did not believe McCarthy’s conduct tainted the Zuma prosecution. He ultimately believed that the timing of the institution of charges remained (and remains) a subsidiary consideration (a red herring in other words) and that it is not central to the merits of the case against Zuma.

And so ends another twist to the saga of the Zuma corruption charges that have clogged up the country’s courts for over twelve years, like a gift that keeps on giving. The scene has been set for yet another showdown with the country’s No1 suspect back in the spotlight. DM

Photo: ‘The cartoon that caused all the trouble’ (Zapiro)