Power games: Upheaval in the labour movement reverberates through Alliance 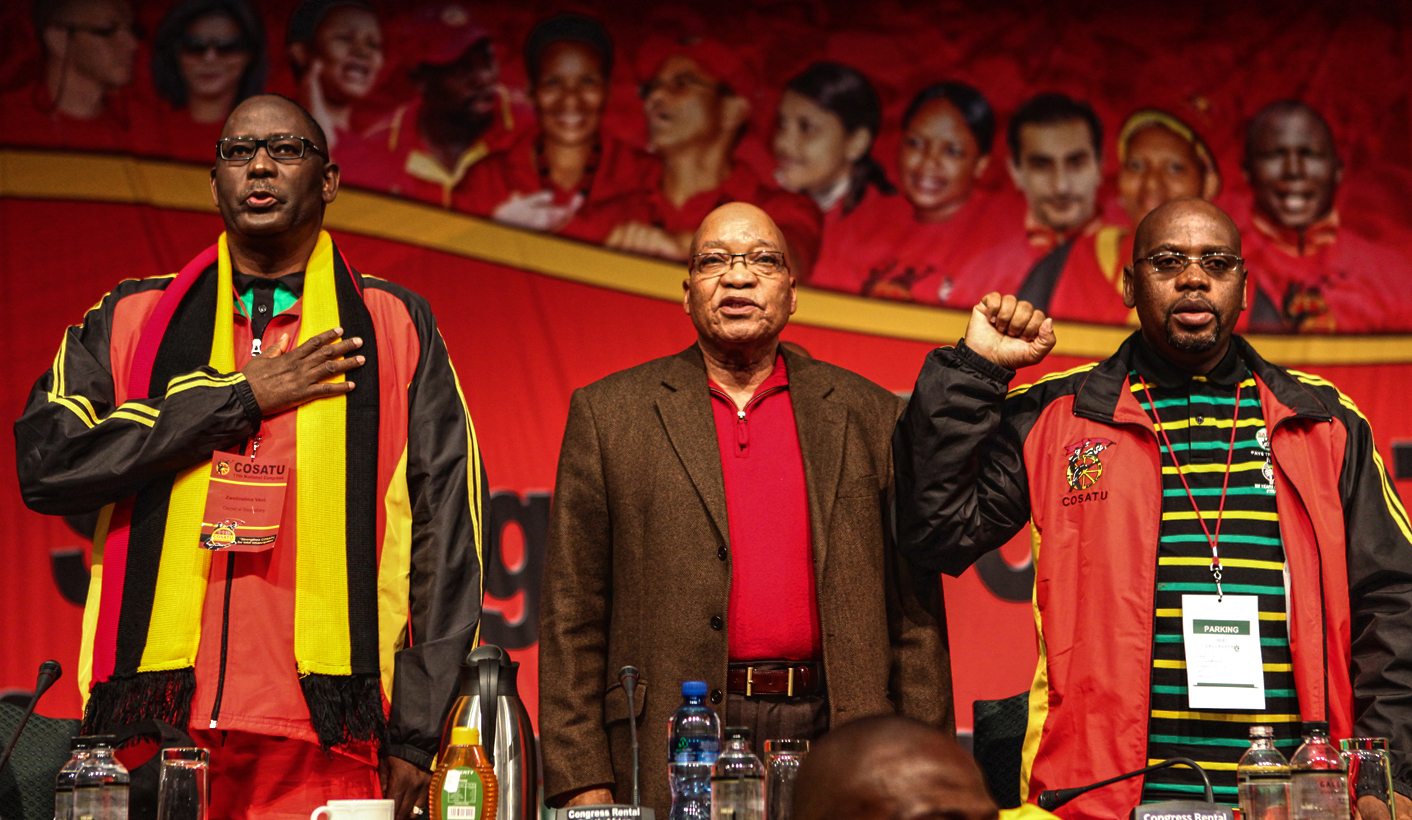 The new general secretary of the National Union of Mineworkers (NUM) David Sipunzi looks a bit like a deer in the headlights following his unanticipated election over the weekend. He has been suddenly foisted into the national spotlight with a swirl of contentious issues around him. Perhaps most daunting for Sipunzi is having to take leadership in an era of uncertainty for the NUM, for Cosatu and, ultimately, for the ANC. There are also some stunned leaders in the ANC and SACP who do not like losing their leverage in the NUM and Cosatu. This is, after all, about a bigger and messier leadership battle. By RANJENI MUNUSAMY.

From Sunday, there were a slew of media statements from Cosatu affiliates congratulating their sister union, the NUM, on a successful 15th national congress and the election of new leaders. The defeat of Frans Baleni, who served as general secretary of the mineworkers union for nine years, by a leader with no national profile, seemed to catch many by surprise. Some of the affiliates clearly did not know who Sipunzi was, judging by the variations of the spelling of his name in their statements.

Baleni did not know what hit him, and neither did his allies in Cosatu, the South African Communist Party (SACP) and the ANC. They did not plan for him being dislodged from such an influential position, even though two of NUM’s 11 regions had nominated Sipunzi to stand against Baleni. They are now left without a champion for their cause in the labour movement.

Baleni was seen as something of an elder in Cosatu. He was a protagonist in Cosatu president S’dumo Dlamini’s corner and leader of the onslaught against former Cosatu general secretary Zwelinzima Vavi and metalworkers union Numsa. For years, unions in Dlamini’s faction would take their lead from Baleni. At Cosatu’s 12th national congress in 2012, it was Baleni who decided that in light of the tensions and divisions, Dlamini and Vavi’s positions should not be contested.

What Baleni wanted, Baleni got. This means that those pulling the strings behind him usually got what they wanted, too. Dlamini, as Cosatu president, has to assume a veneer of impartiality in the various battles. It was therefore left to Baleni to make the manoeuvres at central executive committee meetings.

When it came to the expulsion of Numsa and Vavi, Baleni was a key player in Cosatu leading the offensive. Baleni was not taking his cue just from his members. In fact, the one thing the outcome of the vote at the NUM congress showed is that the union is split finely down the middle in terms of support for him. There has been an obvious loss of faith in the NUM leadership, as evidenced by the haemorrhaging to other unions, particularly the Association of Mineworkers and Construction Union (AMCU). But Baleni has paid a high price for being disconnected from the interests of his members and instead serving a political agenda.

Vavi and Numsa’s leaders therefore took great pleasure in Baleni’s downfall. This is not to say their way has been opened for a triumphant return to Cosatu. In fact they suffered a great setback on Tuesday when the South Gauteng High Court dismissed Numsa’s urgent application to attend Cosatu’s special national congress in mid-July, where they had hoped to appeal their expulsion. Judge Mandla Mbongwe ruled that the matter was not urgent and therefore struck it off the court roll.

Numsa ironically led the campaign for Cosatu to convene the special congress that they will now be unable to attend. The Cosatu unions that have been backing Numsa and boycotting meetings are now also in a quandary about their participation in the special congress and how much longer they hold out for.

So people on all sides of the Cosatu divide are licking their wounds, uncertain of the next moves. Numsa does not have any new ideas for returning to Cosatu and will probably have to wait until the ordinary congress scheduled for later this year to appeal their expulsion. After the NUM congress, Dlamini’s faction will be a little less cocksure about next month’s special congress and whether they will be able to steer it without turbulence. The mood and outlook of workers are difficult to calculate, especially because of the social distance between the leaders and members in individual unions and Cosatu.

Without Baleni in the lead role, Dlamini’s faction will be under further pressure to keep the lid on dissent. And they will be paranoid about outside interference from Vavi and Numsa’s Irvin Jim in how things play out at the special congress. Vavi and Jim are being blamed for engineering Baleni’s downfall, through an “underhand” move to get two regions to nominate Sipunzi, who did not appear to be a real threat. Baleni’s allies claim Sipunzi did not have the ability to run an underground campaign and this was driven from outside the NUM.

The rage was nowhere more apparent that from the SACP. In a statement on Tuesday, the SACP condemned “in the strongest possible terms the factionalist, divisive and opportunistic posturing” by Vavi on the outcomes of the NUM congress.

“Given the challenges facing the NUM in particular, and the trade union movement in general, it is irresponsible in the extreme for Vavi to be celebrating the election of a section of the NUM leadership, instead of encouraging the unity of its entire leadership and membership as a whole. This opportunistic behaviour by Vavi is narrowly informed by his personal and egotistic interests rather than the interests of workers, and goes to prove that he had long ceased to be a unifying force in Cosatu,” the SACP said.

Quite comically, the SACP said it “did not have any preferences or favour one candidate over another in terms of the positions which were contested”. It said it left “the entire question of leadership election in the goods hands of the respected NUM members and delegates.”

Seemingly, the SACP could not similarly leave Cosatu’s affairs to its members and felt the need to lash out at Vavi for something that had nothing to do with the SACP. Clearly though, leaders in the SACP are feeling the sting of Baleni’s defeat and needed to vent against whomever they thought was behind it.

The ANC has not commented on the NUM congress outcome and will probably not want to be seen taking sides ahead of an alliance summit meant to be taking place later this month. President Jacob Zuma called for the summit in order to help Cosatu deal with its problems.

Baleni’s defeat is being read as a setback for Zuma but the president is insulated from the turbulence in the labour federation. It is Deputy President Cyril Ramaphosa who had been grappling with the problems in Cosatu and led a dead-end process to try to heal the divisions. And it is ANC secretary general Gwede Mantashe who stands to lose most from a divided NUM and fracturing Cosatu. This, ordinarily, would be his constituency that would back him as he tries to ascend to the position of ANC deputy president.

The question is, does Zuma want that? Or does the turmoil in Cosatu serve his interests in that it leaves Mantashe on even more insecure footing? Zuma will not be contesting any positions ever again, so his own destiny is not dependent on any factions. What is in his interest is to have people he trusts to succeed him. Right now, that does not appear to be Ramaphosa, or Mantashe.

So while the SACP is continuing the campaign to keep Vavi and Numsa out of Cosatu, the ANC is holding back. It is possible that that is because the ANC’s top leaders are not on the same page and have different interests.

It is therefore not surprising that there is caution from everyone caught up in this muddle and nobody is quite sure what they should do next. If Vavi and Jim did manoeuvre to influence the NUM elections, fate hit back almost immediately with the judgment that makes it all but impossible for them to re-assert their influence over Cosatu at the July special congress. And even as Dlamini’s faction must be celebrating the court victory, they must be worried about Sipunzi’s loyalties and agenda.

Like a bunch of heavyweight boxers that pummelled each other over 14 rounds of brutal boxing, they all now await with trepidation for round 15, where they can very well land a winning punch, but also can be knocked out senseless.

As the battle for control of Cosatu enters a new bloody and muddy phase, it is worth remembering that, while big and important, it is but one of many battles being fought for future control of the ANC and South Africa. This is not a war with short-term victories. The journey to the ANC’s 2017 elective conference will be long and arduous and, like Baleni found out this last weekend, the road will be strewn with many more casualties. DM