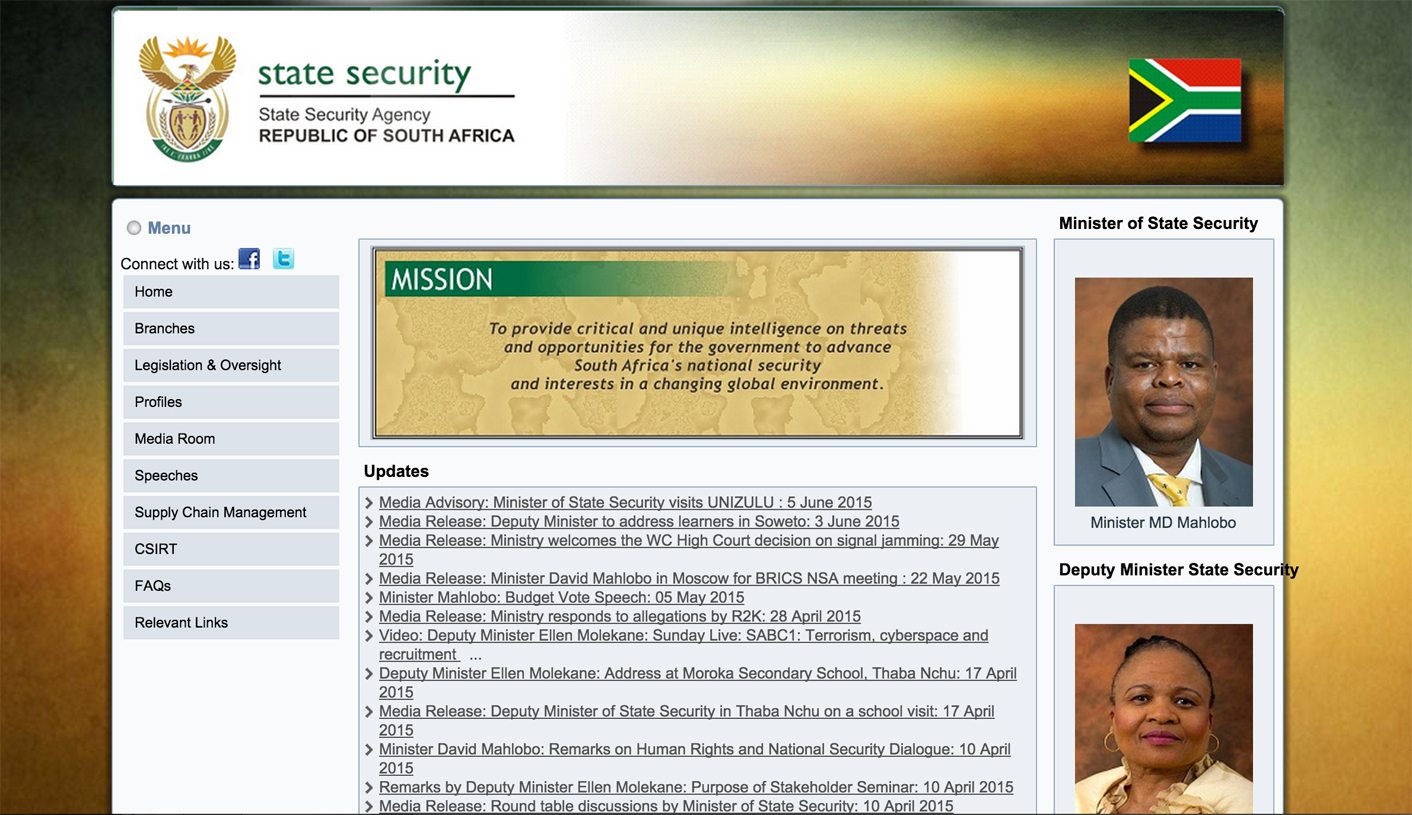 Standing between the citizens of South Africa and the country’s intelligence services is the Inspector General of Intelligence who has the constitutional mandate and immense powers to protect the public from abuse and illegal surveillance by these agencies. Experts, and even a former minister of intelligence himself, believe the State Security Agency has gone rogue and is in the “the grip of paranoia” rendering it a threat to the country’s constitutional democracy. Now more than ever we need an independent-minded IG who is capable of fulfilling the mandate. By MARIANNE THAMM.

Imagine, if you would, a constitutional democracy where the government’s intelligence agencies, essentially there to protect the interests of the state and its citizens from internal and external threats, were drawn into a domestic party political feud and were used to illegally settle scores within that party.

Imagine either the Conservative or Labour parties in the United Kingdom, co-opting MI5 to orchestrate internal divisions in order to discredit one or other “competing faction” in that party. Imagine Republicans or Democrats – whoever is in government – deploying members of the CIA to spy on members of their own or other parties. Imagine the country’s spies eavesdropping on a National Prosecuting Authority to determine whether it was preparing to charge a deputy president with over 700 charges of fraud and corruption.

That in essence is what has happened to South Africa’s State Security Agencies, according to intelligence expert, Laurie Nathan, director of the Centre for Mediation at the University of Pretoria and one of three commissioners who sat on the 2006 Ministerial Review Commission on Intelligence (the Matthews Commission) which made damning findings on the state of the country’s intelligence agencies in its final 2008 report.

“The services suffer from an unreconstructed Apartheid mentality and remain immersed in obsessive secrecy that precludes accountability and oversight. Party politics in the ANC makes them a threat to the constitutional democracy. They believe they are above the Constitution. They believe they are guardians of the Constitution and sit above it. They think it is legitimate to break the rules and that they are special,” Nathan told the Daily Maverick.

He added that the services were “close to being rogue” and were “subordinate to the president and the ruling party and not the Constitution”.

The Matthews Commission was established by the then minister of intelligence, Ronnie Kasrils, in the aftermath of a series of “spy scandals” in the country and apart from identifying “troubling indifference to constitutional rights” also found that the Inspector General of Intelligence, a civilian oversight function accountable to the Joint Standing Committee on Intelligence, did not have operational independence and that the JSCI in Parliament met almost entirely in secret, eroding public participation.

Kasril’s echoed Nathan’s sentiments in an interview in March this year in which he said the State Security Agency is caught “in the grip of political paranoia”.

The rather opaque website for the office describes the position thus: “The concept of civilian oversight implies that the Inspector-General is not a member of the Intelligence Services is independent and reports on his/her functions to Parliament through the Joint Standing Committee on Intelligence.

Said Nathan, “The IG has the potential for great oversight. He or she is not answerable to the minister or the intelligence services and may not be thwarted. They can walk into any building and open any file or attach any computer. It is a criminal offence not to comply. There is incredible power in that that has been squandered over the years. We have no idea what they do. The IG has no sense of accountability to parliament or the people. It is every bit as secret as intelligence and is in fact in thrall of secrecy.”

A little cruise around the website of the OIGI indeed confirms this. While the IG reports annually to Parliament none of these reports are available for public perusal. Apart from the usual promotional bumff there is virtually nothing on its current work.

And it is for this reason that the next round of interviews for the country’s new Inspector General – a sort of Public Protector of the intelligence world – must be open and transparent. It is unlikely, however that the citizens of South Africa will be getting a Thuli Madonsela MKII in this crucial position considering the widespread and endemic abuse of the country’s intelligence services.

And it is also for this reason that opposition party members as well as several lobby groups were outraged when the first round of “pre-screening” interviews of eight candidates (whittled down from a list of 57) for the position were initially held behind closed doors.

Democratic Alliance JSCI members Dirk Stubbe, Hendrik Schmidt and Herman Groenewald staged a walkout and later the Right2Know Campaign, the Institute for Security Studies, the Council for the Advancement of the South African Constitution as well as the AmaBhungane centre for Investigative Journalism lobbied that the interviews be open to the public.

On Thursday, committee chairperson Connie September announced that in terms of the closed “pre screenings” the JSCI had “exercised its discretion in terms of the Intelligence Oversight Act and relevant joint rules of Parliament” and had met as a sub-committee to shortlist candidates and later, the same day, “as full Committee of the JSCI in the open to confirm the decision of the sub-committee.”

“We reiterate the decision of the JSCI that the interviews will commence in an open session,” she said.

Three further names were added to the list after the committee re-advertised the position. They are Annelize Gerber and Desire Fouche – both with experience in the SANDF – and Mahlubandile Radebe, a former South African Secret Service employee.

While Burgess is widely regarded as the front-runner he will have a tough time proving his “independence” having led the ad hoc committee that adopted the controversial Protection of State Information Bill as well as serving on the ad hoc committee on Nkandla which exonerated the President Jacob Zuma.

Nathan said that the idea or sense of secrecy that surrounds the JSCI derived from “a few years back when NIA convinced the committee that they were a bunch of amateurs. The idea is that the committee should be seen to be pushing, but not too much.”

Nathan added that he had been involved in the area of security reform in various countries and “if you want reform and compliance you need a cabinet minister who is responsive”.

He cited Kasril’s order in 2005 for the then Inspector General, Zolile Ngcakani, to investigate former NIA head, Billy Masethla, after complaints by businessman Saki Macozoma that he had been under illegal surveillance.

Masetlha was charged for withholding information from the IG and was later suspended in November 2005 after the court found that he ran a political intelligence campaign including fabricated emails.

South Africans have it difficult, at the best of times, keeping track with the illegal covert operations of the country’s spies and which surface weekly in the media.

The latest revelations surfaced in May this year when two SARS employees blew the lid off ‘Project Sundays’, an illegal surveillance operation allegedly ordered by former SARS head Ivan Pillay and during which the offices of then NPA head Vusi Pikoli and various other investigators were bugged in order to glean information on progress into investigations of charges of corruption against former police chief Jackie Selebi.

It was these illegal tapes that eventually found their way to Zuma’s attorney Mike Hulley and which prompted the then acting NPA head Mokotedi Mpshe to drop corruption charges against the then deputy president.

With regard to the appointment of the new Inspector General for Intelligence Nathan opined, “There are no grounds for optimism”. DM