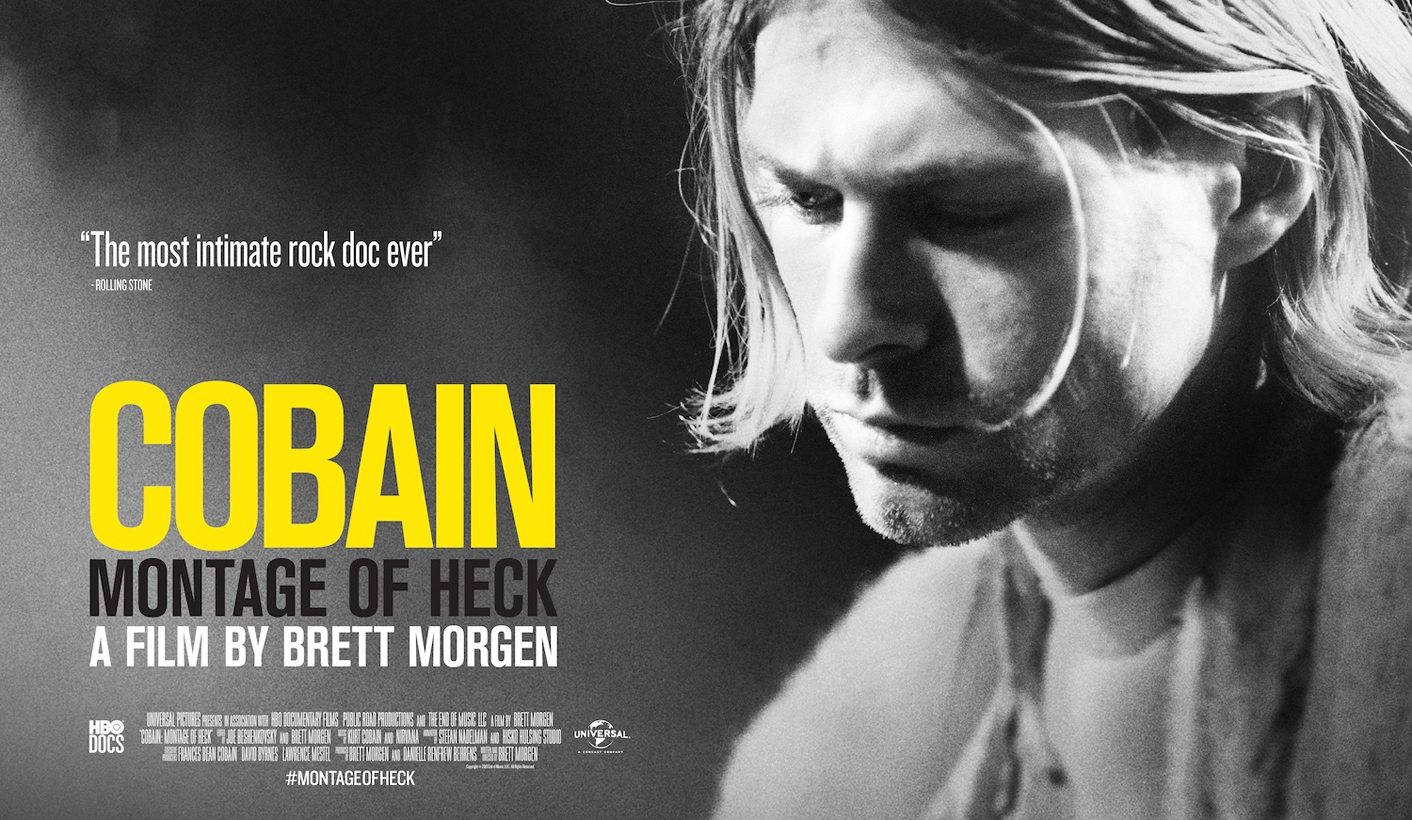 Every year the Encounters team pulls together an intriguing programme of documentaries, with local and international offerings. This year is no exception, but the international roster is perhaps slightly less strong than it has been in recent years. Still, there’s plenty that’s worth the price of a ticket.

One film that probably needs little selling is US director Brett Morgan’s Kurt Cobain: Montage of Heck. The authorised biopic about Nirvana’s lead singer made headlines in the last few days due to claims by a friend of Cobain’s that it paints an inaccurate and overly tortured view of the singer. Cobain fans will probably end up in puddles of their own tears, but even for the less devoted, it’s a gripping look at the pressures of life in the spotlight.

Another film which arrives swirling with hype is Laura Poitras’ Citizenfour, which won this year’s Best Documentary Oscar for its portrayal of American whistleblower Edward Snowden. Poitras shot the clandestine meetings between Snowden and erstwhile Guardian journalist Glenn Greenwald, who helped expose the extent of NSA spying on US citizens, in a Hong Kong hotel room. It’s fascinating to get a glimpse of Snowden the person, rather than the shadowy figure on magazine covers. He comes across as much less messianic than you might assume. The film also makes clear the extraordinary extent of Snowden’s sacrifice, though in the final scenes he looks pretty cosy in his Moscow flat with his girlfriend.

Citizenfour at its best feels like a spy thriller, but it’s also longer than it needs to be, even given the importance of its subject matter.

Danish director Camilla Nielsson’s documentary Democrats has also been garlanded with awards at international festivals. Shot in Zimbabwe over three years, it covers the drafting of a new constitution after the 2008 elections. If that makes it sound dry, don’t be fooled. Nielsson cleverly chose to focus on the dynamics between two political opponents: MDC’s Douglas Mwonzoro and Zanu PF’s Paul Mangwana, who both sit on the committee responsible for the drafting. She follows the two as they carry out consultations on the constitution held around the country, where it soon becomes clear that something fishy is afoot.

It emerges that war vets and the secret police has been drilling communities in advance on the right answers to give, to ensure that Zanu PF has the upper hand in negotiations. A group of villagers is asked how judges should be appointed. “I insist the president is the only one who can choose his judges,” one says. “I think the president is the only one capable of appointing judges,” the next says, and so on. When Mangwana is told, he chuckles uproariously. “But we can’t control that!” he says.

There’s drama ahead for both Mangwana and Mwonzoro when they fall foul of those at the top of Zanu PF. Democracy in Zimbabwe, the film reminds us, sometimes looks quite different from democracy elsewhere.

If you’re looking for a cinematic way of understanding modern China, The Iron Ministry is the one for you. Be warned, though: the film tells no particular story. It simply captures a trip on a Chinese train. The camera wanders up and down the corridors, stopping to examine the contents of lunchboxes and eavesdrop on conversations about everything and nothing. The first piece of translated speech comes after a full 18 minutes, so don’t expect dialogue to be central.

The Look of Silence is US director Joshua Oppenheimer’s follow-up to the astonishing 2012 documentary The Act of Killing, where Oppenheimer somehow managed to persuade the Indonesian generals and politicians who were responsible for the murder of over a million suspected Communists in the mid-60s to re-enact their crimes for the camera. They did so with boastful relish, which is one of the benefits of still being in power five decades later.

This second piece may not be so much of a revelation to those have seen The Act of Killing, since it’s revisiting the same territory, but it confirms Oppenheimer as one of the most brilliant and audacious filmmakers of our time. Oppenheimer takes an optometrist called Adi to confront his brother’s killers by asking them questions while testing their eyesight. The revelation that Adi’s own family may have been complicit in his brother’s death is devastating. You’ll find it hard to forget Adi’s ancient parents, either. His mother, aged over 100, says she has never celebrated her birthday because “I don’t believe in that. You get addicted to it.”

Other than The Look of Silence, the standout film of the international bunch is Romanian director Alexander Nanau’s Toto And His Sisters. It’s a documentary that tracks three kids who live in the slums of Bucharest, effectively orphaned when their single mother is sent to jail for drug dealing.

Media portrayals of poverty so often focus on Africa that there’s something quite refreshing about a reminder that it’s a reality on every continent. Toto and his sisters have lives characterised by hunger and uncertainty, though also extraordinary resilience. 14 year-old Andreea is barely literate: “I don’t know what a word is,” she replies when a teacher asks her to point out a word. Seventeen-year-old Ana has been using drugs since she was 13, but is determined to get clean. Ten-year-old Toto lies on a sofa next to addicts injecting themselves – since their mother got locked up, her deadbeat brothers have been using their one-roomed flat as a hangout for the neighbourhood junkies.

It is riveting stuff. If you have a heart, you will start to root deeply for these kids, sigh audibly at their missed opportunities and rejoice in their small triumphs. Steel yourself for an ending that won’t see you leave with a spring in your step.

Of the local productions, Between the Devil and the Deep is Heinrich Dahms’ exploration of the town of Hawston, a predominantly coloured community just outside Hermanus in the Western Cape. The mysterious death of local boy Steven Figaji, apparently at the hands of police, has left his family and friends enraged by what they say is an ongoing pattern of police brutality. An official autopsy said Figaji drowned – so why were there bruises on his body?

Figaji, like many of the men in the community, was an abalone poacher. The film offers no judgement on this score, and it gives an intriguing glimpse into the motivations for poaching and the mechanics of the job. Hawston residents acknowledge that abalone is endangered, but they deeply feel the injustice of not being able to legally dive for abalone when their fathers and forefathers have done so for generations. They say, too, that the reduction in their fishing quotas forces them to continue poaching to make ends meet.

“You labelled us a poacher because you made us poachers,” one says. There are a number of memorable and endearing characters, and a thrilling rubber-duck chase scene doesn’t hurt either.

Ryley Grunewald’s The Shore Break also deals with a conflict between communities and authorities. Here, Pondoland’s Wild Coast is the setting. Australian mining company Transworld Energy has its eyes on the land, and is working with the likes of businessman Zamile Qunya to convince the locals that mining is the magic bullet that will bring them jobs and prosperity.

Pitted against Qunya is his own cousin Nonhle, a local tourguide who is deeply opposed to mining. Also prominent in the tussle is prolific Daily Maverick commentator John Clarke, a social worker who attends the mining company’s public participation sessions and asks distinctly inconvenient questions.

It’s an outstanding documentary. The Wild Coast is a filmmaker’s dream from an aesthetic perspective, and praise should also go to the film’s use of beautiful sand animation and an evocative soundtrack.

“Maybe this democracy is too… democratic,” Nonhle sighs at one point. We’ve all been there. DM

Encounters Documentary Festival is running from 4 to 14 June at cinemas in Cape Town and Johannesburg.