NUM: The end of The Age of Frans Baleni 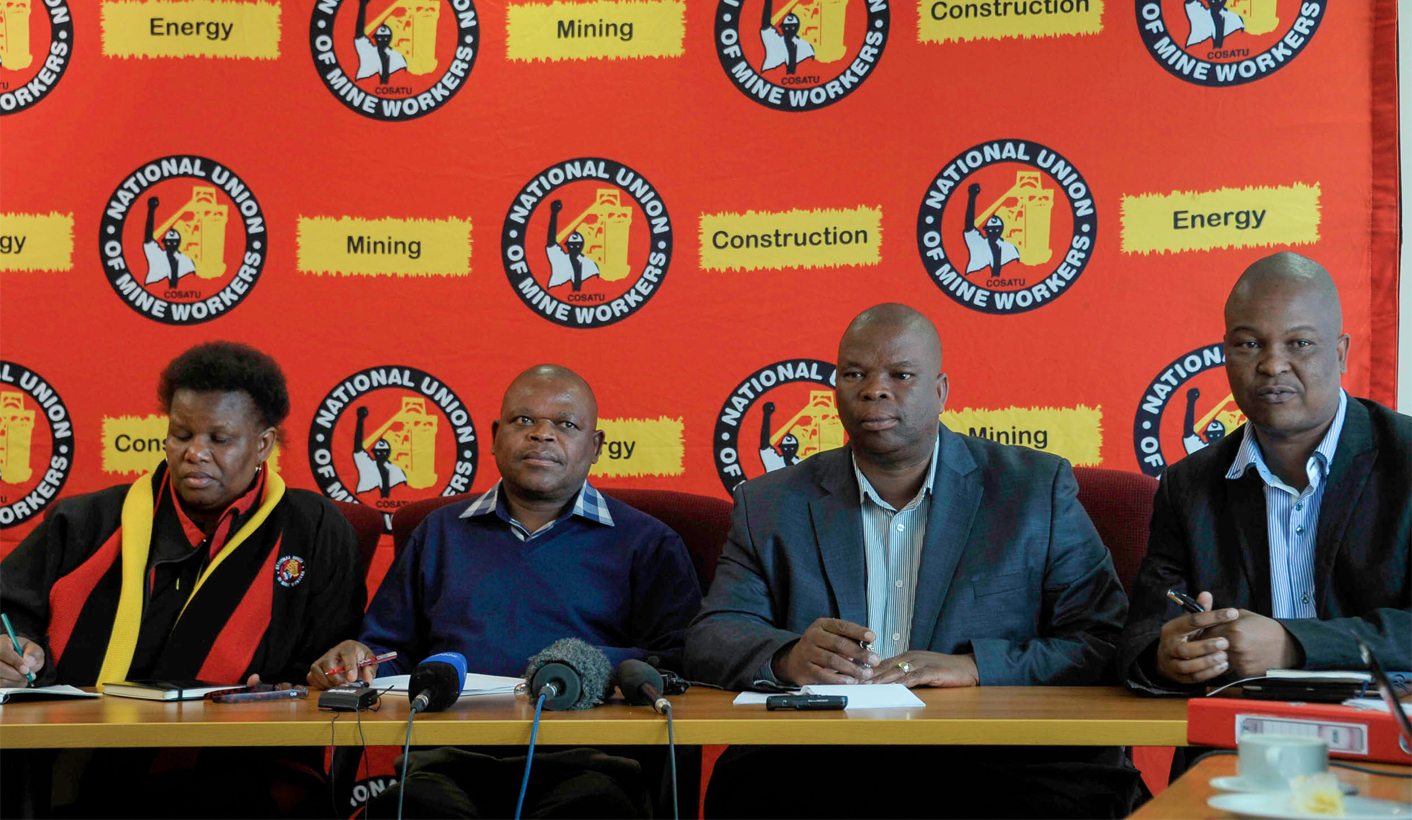 After a decade at the helm of what was the country's biggest union, Frans Baleni is no longer the National Union of Mineworkers’ general secretary. His successor will have to prove himself amid declining membership, a struggling Cosatu and upcoming wage negotiations in the gold and coal sectors. By GREG NICOLSON.

Frans Baleni was one of the youngest negotiators during the 1987 gold and coal strike. Members of the National Union of Mineworkers (NUM) were determined to challenge the system, having declared it ‘The Year the Mineworkers Take Control’. It was the largest and costliest strike the country had seen, with the union demanding huge improvements in pay and conditions. Baleni was at the forefront, even when the union had to deliver bad news, including when an agreement was reached in the face of mass dismissals, even though the demands had not been met.

“It was a defining moment for me. I was still young,” he says, noting the resulting mineworkers provident fund was one of the best things that ever happened for the union.

Over 30 years after joining the NUM, Baleni is leaving union work, narrowly losing a vote for the general secretary position to Free State secretary David Spunzi over the weekend. Baleni leaves after another round of strike action, the biggest since 1987, has left NUM’s future uncertain and while Cosatu faces unprecedented challenges.

After helping build the NUM and expand the reach of the South African Communist Party, Baleni was elected the union’s general secretary in 2006. Like his predecessor Gwede Mantashe, but unlike former union leaders Cyril Ramaphosa and Kgalema Motlanthe, Baleni had worked in the mines. His rival for the post, Archie Palane, who had not, was seen as too distant from members to run the largest union in the country, despite having more experience in NUM leadership.

On Sunday, Baleni cited a list of achievements. The union has pushed education and training for its members, developing engineers, doctors, lawyers and chartered accountants, said Baleni, who has served as chairman of the union’s JB Marks Education Trust Fund. It’s supported over 4,900 bursaries and is financed by the Mineworkers Investment Trust (MIT). The trust is the sole shareholder of the Mineworkers Investment Company (MIC), which NUM established in 1995 and has a current net asset value of R5.1 billion. MIC invests in a wide range of sectors including industrials, finance, media, technology and leisure. It has stakes in companies such as Much Asphalt, Primedia, Puregas, Gesat, Metrofile, MSA, Set Point, FirstRand Group, Nimble, Tracker, Westcon, Masana and Peermont.

Baleni said another key achievement has been the success of collective bargaining, with entry-level pay for mineworkers rising significantly during his time. Health and safety has improved, with more still to be done. The union has received unqualified audits and has complied with its constitution. Workers’ access to housing schemes has also risen, he said.

Speaking over the phone, Baleni noted two key challenges during his time as leader. First, meeting goals regarding the work of branches. Second, “The Marikana story has obviously been a big problem for us.”

That’s an understatement. The NUM has been accused of being partly responsible for both systemic and direct causes of the Marikana massacre. NUM was labelled the ‘National Union of Management;. Workers claimed local and national union leaders failed to represent their interests and looked to use their positions to advance a company or political career.

The Marikana Commission of Inquiry heard local NUM leaders failed to take up the grievances of the rock-drill operators and even fired on the workers when they marched to the union offices on Friday 10 August 2012, the first shootings in a week that left 44 people dead. NUM president Senzeni Zokwana had to address workers from a police vehicle because it wasn’t safe to stand in front of them and he was also linked to Ramaphosa’s efforts to end the strike. Not only did the NUM lose its credibility in the platinum belt to the Assocation of Mineworkers and Construction Union (AMCU), a number of its members were killed that week and in the reprisal murders that followed.

The NUM expressed its sadness over the event, but has always blamed AMCU’s role. “There are those dark forces who can mislead our members, make them to believe that they have got extra power to make their lives to be different overnight. An unconscious member is as dangerous as an enemy,” Baleni said shortly after the massacre.

Under Baleni the union originally saw a growth in its membership. But AMCU’s rise in the 2012 and 2014 platinum strikes, the largest in South African history, and a struggling mining sector has led to a rapid drop in NUM’s membership, reportedly falling from around 310,000 in 2012 to a current 230,000 members, with the Rustenburg region taking the biggest hit.

The NUM gathered last week for the union’s fifteenth national congress under the theme “back to basics – members first”. Baleni lost the vote to serve a fourth term as general secretary, with David Sipunzi taking it by nine votes. Baleni said he will now try to spend time with his family. His deputy, Thsimane Montoedi, will be replaced by William Mabapa and Piet Matosa was confirmed as president after serving as acting president since Zokwana went to Parliament and become the minister of agriculture, forestry and fisheries in President Jacob Zuma’s government.

The change in leadership was immediately linked by observers to Cosatu’s expulsion of Zwelinzima Vavi and the National Union of Metalworkers SA (Numsa). Sipunzi is reportedly sympathetic to the outsiders while Baleni took a hard-line on their expulsion. Baleni has close ties to Cosatu president Sdumo Dlamini and therefore Zuma.

“We need to unite the labour movement. We will talk to Numsa and Vavi. There is a need for a bilateral between ourselves and Numsa leadership. You can’t talk unity within Cosatu without Numsa and Vavi. Vavi is a prominent leader. You need to engage him,” Sipunzi said after his election, reported Mail & Guardian. Vavi and Numsa general secretary Irvin Jim both hailed the change in leadership.

The NUM’s congress declaration, however, suggests the union might be split on the matter. It welcomes the Liberated Metalworkers Union of SA, established to rival Numsa, into Cosatu and “fully supports the decision taken by Cosatu to expel Numsa and Zwelinzima Vavi respectively. On the one hand, should Numsa reverse its 2013 December resolution that undermines the federation’s founding principles of ‘One Industry, One Union’ the NUM will be the first union to call for Numsa’s re-instatement.” It was a line straight from Baleni’s days.

Regardless of how the NUM handles Vavi and Numsa, its first priority will have to be rebuilding. “We need to recoup the members we lost in the past few years. No trade union can have dignity without members. We urge all those who left to come back,” Sipunzi said. “We need to sit down with the membership and decide on what needs to be done to correct the situation. We need to address the disillusionment of staff members and recruit back the members we lost.”

The introduction to the NUM congress declaration was a Che Guevara quote: “The road is long and full of difficulties. At times we wonder from the path and must turn back; at other times we go too fast and separate ourselves from the masses; on occasion we go too slow and feel the hot breath of those treading in our heels. In our zeal as revolutionists we try to move ahead fast as possible, clearing the way, but knowing we must draw our sustenance from the masses, and that it can advance more rapidly only if we inspire it by our example.”

Sipunzi will have to start leading by example immediately. The NUM faces upcoming wage negotiations in the gold and coal sectors while across the mining industry companies are warning retrenchments are on the way. DM