Is SAPS cooking the books on protest numbers? 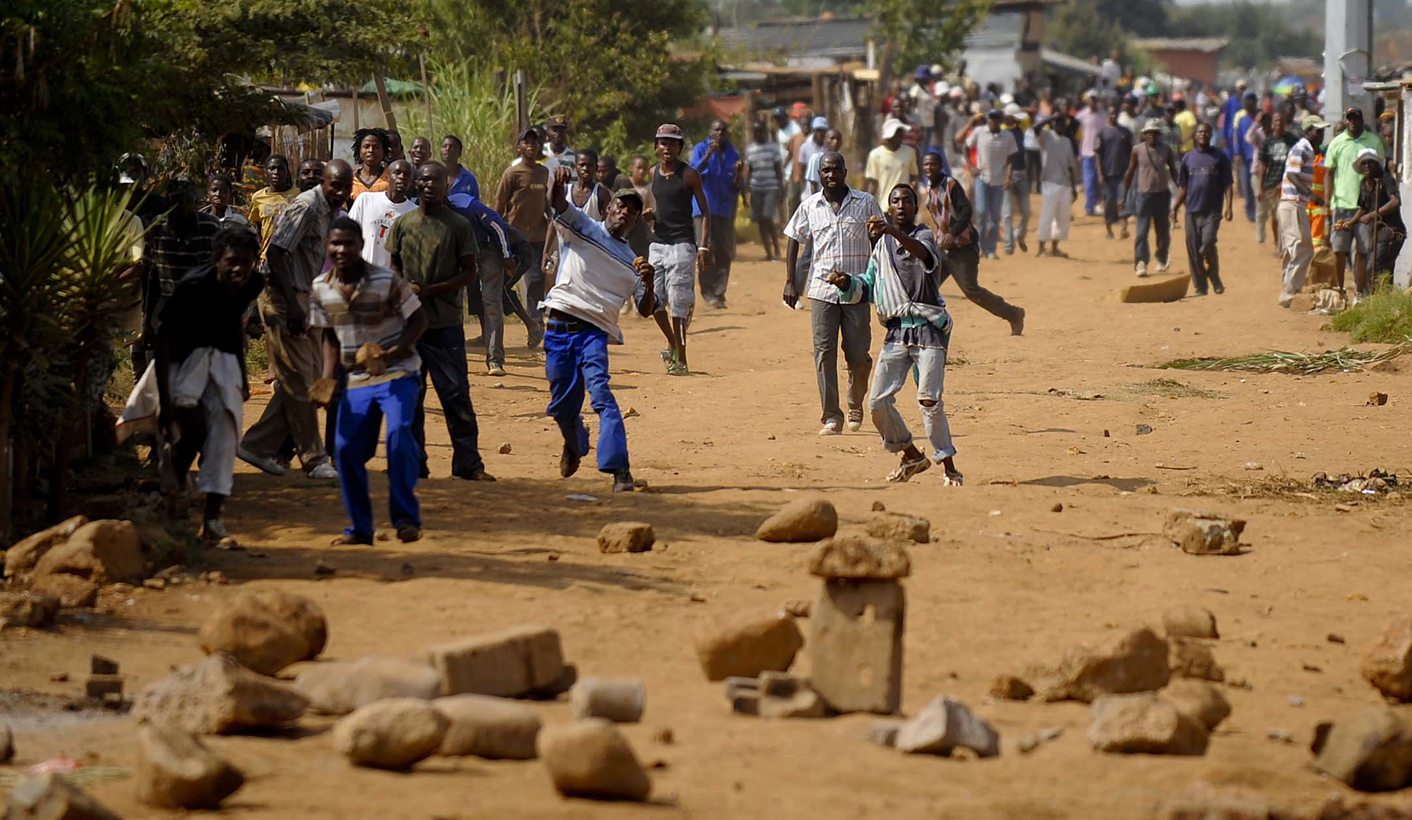 Last week, a report produced by the University of Johannesburg claimed that the police and leading figures in government were misrepresenting the number of protests SAPS deals with annually. The suggestion is that this is being done in order to bulk up the amount of money spent on public order policing. Police management deny the claims. By REBECCA DAVIS.

The SAPS has been indicating for some time that they intend to seriously beef up the police force’s public order policing capacities. In September 2014, SAPS top brass appeared before Parliament’s police committee and announced that the ongoing “upsurge against state authority” required urgent “additional interventions”.

Because they were dealing with so many more protests than previously, police chief Riah Phiyega asked Treasury for R3,3 billion over four years to almost double the number of riot police and procure more equipment like armoured vehicles and water cannons.

At the time, civil society activists expressed concern, pointing out that SAPS’ own figures showed that the overwhelming majority of protests in South Africa were peaceful.

Now, University of Johannesburg academics say that these figures are misleading anyway.

A report by the Social Change Research Unit’s Peter Alexander, Carin Runciman and Boitumelo Maruping has interrogated the records of SAPS’ Incident Registration Information System (IRIS), after a successful Promotion of Access to Information Act (PAIA) request. The report finds that a proportion of what IRIS classes as “crowd-related incidents” are not, in fact, protests at all – simply occasions on which large numbers of people gather together, such as sports matches.

Ten percent of all “incidents” between 1997 and 2013 were recorded as “sporting event” or “social event”. By way of comparison, “dissatisfied with service delivery” accounted for 4% of incidents – though it was only introduced as a category in 2008.

IRIS distinguishes between incidents which involve “crowd (peaceful)” and “crowd (unrest)”. The latter category refers to incidents which require “some form of police intervention”. The researchers point out, therefore, that events are classified as being characterised by peace or unrest based purely on what police do, rather than what the protestors do.

“With specific regard to peaceful/unrest, IRIS data should be interpreted with caution,” they write. “Unrest cannot be equated with violence.”

They also note that it is difficult to determine a coherent set of criteria for the deployment of public order policing, because more than a third of all recorded incidents are not assigned a motive. Moreover, “recreational, religious and cultural events and official government and party political events also take up a large proportion of the incidents recorded by public order policing”.

“The longer we worked on this report the more it became clear that top South African Police Service (SAPS) officials and government ministers misconstrued IRIS data and in consequence misled Parliament and the public,” the report concludes.

They cite President Jacob Zuma’s 2015 State of the Nation Address as an example. “We are a democratic state and recognise the community’s right to protest,” Zuma said. “The police successfully brought under control 13,575 recorded public order incidents, comprising 1,907 unrest-related and 11,668 peaceful incidents.”

The phrasing “successfully brought under control” gives the impression that these events were otherwise out of control and perhaps violent, which is not the case. The vast majority of the “public order incidents” the President is referring to there were events like “football matches, religious events and self-marshalled protests”.

Similarly, Police Minister Nkosinathi Nhleko said in his department’s budget vote speech in May that police had to attend to 14,740 incidents last year, and that “the fact of the matter is that these protests continue to strain the resources of the SAPS”.

The implication there is clearly that “protests” and “incidents” are the same thing, while in reality they are very much not.

It’s important to note that the report’s authors do not dispute the idea that, in general, the number of violent protests in South Africa has increased in recent years – though the scale of this increase remains unclear. What concerns them is the notion that the President and police officials might be motivated to inflate the figures of protest action in order to justify the expansion in riot policing capacities.

In the wake of the report’s release, SAPS put out an angry statement accusing the researchers of a “deliberate misinterpretation of facts”. Spokesman Solomon Makgale wrote:

“The SAPS […] did not conflate ‘incidents’ and ‘protests’. Any crowd management action is defined as an incident, which will either be peaceful or termed as unrest. In other words ‘incidents’ include all protest actions, peaceful gatherings and pure unrest incidents that cannot be justified as crowd management incidents like taxi violence, gang violence, ethnic and racial violence, demonstrations, political meetings, road barricades and revenge attacks by a small group of people.”

The police response did not explain why government officials do keep conflating “incidents” and “protests” in their utterances to Parliament – as the examples of President Zuma and Minister Nhleko suggest.

On Sunday, a statement released in response by the University of Johannesburg’s Social Change Research Unit said that the researchers stood by the report: “We refute [SAPS’] distortion of analysis found in our report”.

SAPS also denied that their September 2014 presentation to Parliament made it sound as if all the violent protests warranted more funding: “The motivation provided for the additional funding was not just for additional capacity to do crowd control management during violent protests, but for crowd management in general”.

The tone of the September 2014 presentation – attended by the Daily Maverick – distinctly put the emphasis on violent protest, however. You can read our report on that meeting here. Lieutenant General Elias Mawela introduced his presentation by saying: “The Republic is currently experiencing an upsurge in violent incidents which is requiring urgent additional interventions from SAPS”.

In the same meeting, Malewa said there was an “urgent need” for nine water cannons to be allocated to each province. Presumably he didn’t mean that they would be wheeled out for every soccer match and religious festival.

Groups like the Right2Know campaign have for some time being voicing concern about the growing crackdown on South African protest and dissent, as well as the increasing surveillance of activists. What the UJ report suggests, disturbingly, is that this crackdown is being bolstered through the presentation of patently misleading information.

If top government officials are deliberately feeding the public skewed data in order to justify pumping money into riot police and water cannons instead of housing, we should all be deeply concerned. DM

Photo: Rioters throw stones during a protest at the Phomolong informal settlement, outside Pretoria, March 23, 2010. Reuters/Stringer