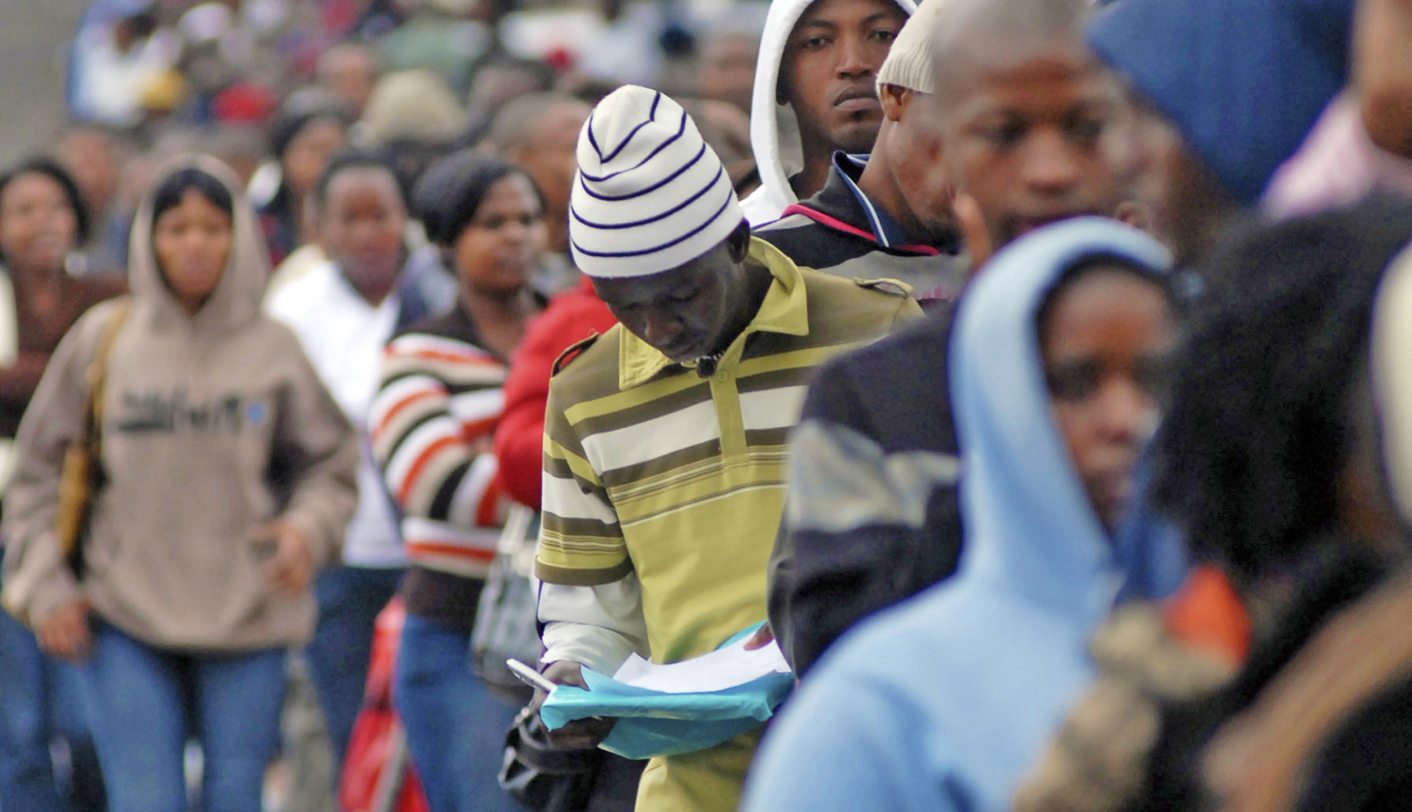 President Jacob Zuma again emphasised on Tuesday in Parlaiment that South Africa has “a good story to tell”. Employment and growth figures, however, have worsened. The numbers point to an ongoing crisis, one the government has been unable to solve. By GREG NICOLSON.

The employment figures are not good, with unemployment hitting a decade high. Statistics South Africa’s Quarterly Labour Survey released on Tuesday put official unemployment at 26.4 percent, climbing from 24.3 percent in December and 25.2 percent at the same time last year. The expanded unemployment rate, which includes those who have given up looking for a job, has continued to rise, reaching 36.1 percent.

There’s a positive. In the first quarter of 2015, there were an additional 140,000 people employed with significant jobs added in finance and agriculture. There are 405,000 more people employed than at the same time last year. But more people keep being added to the list of officially unemployed and discouraged job seekers.

Announcing the figures, Statistician-General Pali Lehohla looked at the good, claiming new jobs might mean others also decide they want work and therefore the number of those unemployed, who want work but can’t get it, increases. He also said the quarterly figure is in line with past trends, dropping in the first quarter after a rise in the festive season. To make matters more complicated, Stats SA also pointed out that the new rate comes off figures from a new master sample, updated after the 2011 Census, meaning it’s hard to compare the newest atrocious unemployment rate to past atrocious unemployment rates.

Nevertheless, Tuesday’s announcement is disturbing. The new figures are more accurate than the old, meaning the unemployment figure of 26.4 and expanded rate of 36.1 percent might not be simple to compare but nonetheless reflect the dire situation South Africans are experiencing.

The situation should be worrying for government, given its consistent inability to reduce the unemployment rate despite constant promises to target the issue along with the two other “triple threats”, poverty and inequality.

It’s not surprising, however, given the growth figures also announced on Tuesday. Gross domestic product (GDP) grew by only 1.3 percent, seasonally adjusted and annualised, in the first quarter of 2015, below expectations taking into account the recent load shedding. GDP grew 4.1 percent in the fourth quarter of 2014. Stats SA said unadjusted real GDP increased by 2.1 percent over the first quarter of 2014. Again, the quarterly growth was lower than expected, hit by falling production in agriculture and manufacturing.

Last year, South Africa’s economy suffered from the lengthy strike on the platinum belt. This year electricity is the problem. Critics cite a host of policies hostile towards investors, which are likely part of the problem causing low business confidence, but the key issue is that load shedding is taking its toll. Those power outages stopping you from watching Our Perfect Wedding translate to a loss in production and jobs. Finance Minister Nhlanhla Nene has acknowledged it. Maintenance issues at power plants, the failure to get Medupi generating electricity by target dates, and likely the leadership issues at Eskom, are cramping South Africa’s growth.

A response to the GDP figures from Stanlib on Tuesday said, “It is clear that the South African economy has lost momentum over the past two years. This is partly due to the protracted strikes in the mining and manufacturing sectors, regular electricity shortages with the constant threat of further blackouts, a lack of policy clarity in key industrial sectors, and a drop-off in consumer and business confidence. It is especially concerning that since the global financial market crisis in 2009, the rate of economic growth in South African has not been robust enough to lead to widespread job creation in the formal private sector.”

Speaking in Parliament on Tuesday, President Zuma welcomed the release of the GDP figures but said quarter-on-quarter figures needed to improve. “We have indicated before that energy is a serious constraint to economic growth. We continue to implement our energy intervention plan. We also continue to support Eskom while also exploring the development of a reliable energy mix.”

Mmusi Maimane, leader of the Democratic Alliance, replied, “It should make all of us angry that, over the past five years, our economy has grown at less than 2%. Despite our position as a global trading hub, our BRICS membership, and our vast pool of natural resources, one in three South Africans cannot find a job.”

Both slow growth and high unemployment have been persistent for years in South Africa. President Zuma and the ANC have publicly committed to both radical economic transformation and the National Development Plan (NDP). The first is lacking on details but likely includes rapid growth and lowering levels of unemployment, but the latter has a target figure. The NDP says the country needs five percent annual GDP growth to tackle unemployment, inequality and poverty. But despite the state’s promises, both unemployment and GDP are worsening.

Statisticians, economists and policy makers can get into the boring details. But the numbers point to an ongoing crisis, one the government has been unable to solve. DM