‘Kragdadigheid’ revisited: The growing heavy-handedness of the state 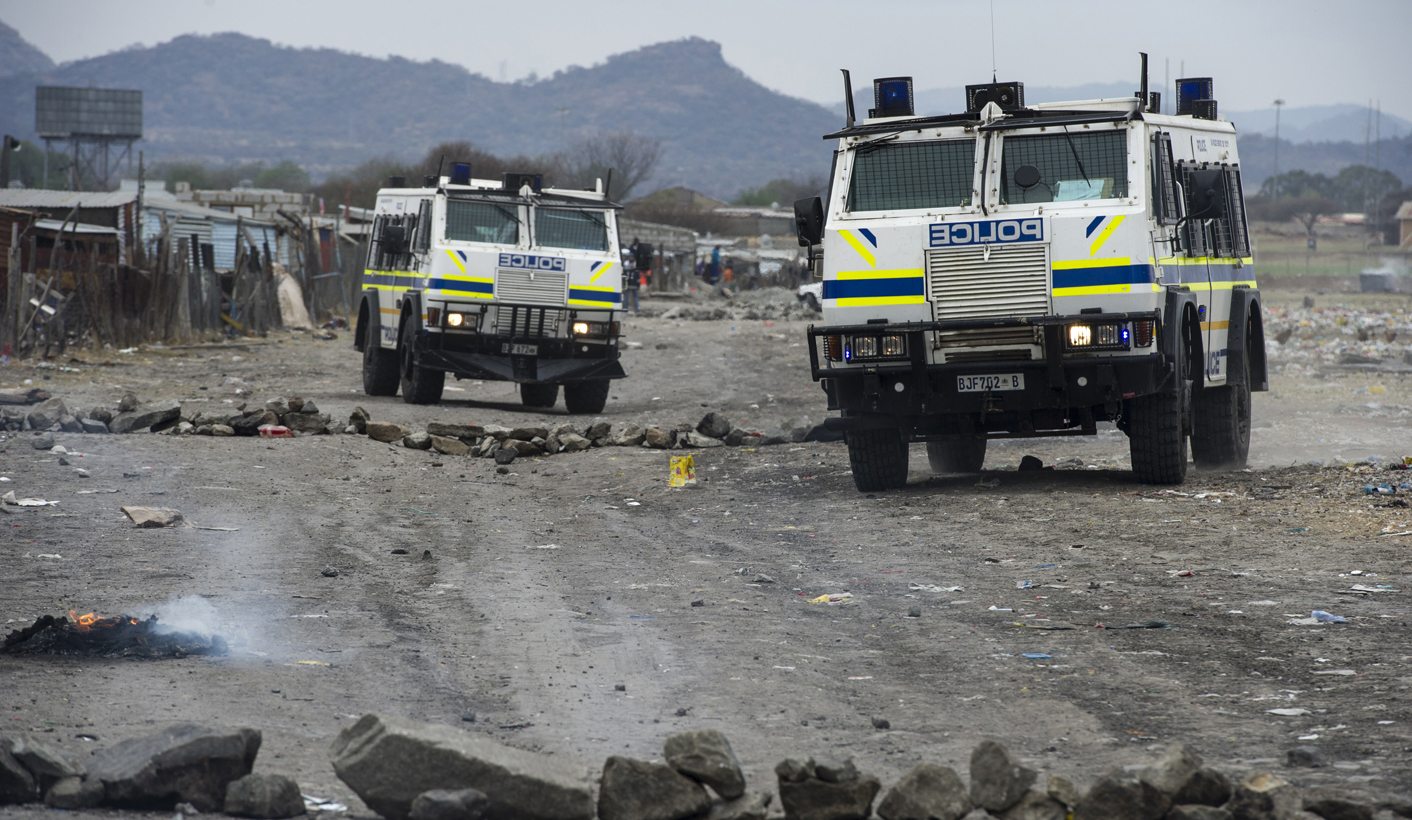 Why is it that President Jacob Zuma has to be prodded and begged to release a report on a massacre that should be generally accepted as a heinous event in our history, and when the need for justice should be common cause? Why does the South African government have to justify Operation Fiela’s excessive force against foreign nationals when our democracy rests on the principles of human rights? And why are there constant threats by the ruling party to clamp down on the media in an open society? This was meant to be a compassionate, responsive government, not one whose iron fist hovers over society. By RANJENI MUNUSAMY.

It boggles the mind that so many people in positions of power and influence in the South African government have the propensity to believe bogus documents and blogs as the source of credible information. After a trail of discredited documents based on misinformation have polluted the political space, and the Minister of State Security David Mahlobo casted serious doubts on his credibility by investigating prominent leaders based on information from a bogus website, a fake document is being relied on to demonstrate a media agenda against the ANC.

It was bad enough that the ANC issued a statement claiming that they had discovered a Daily Dispatch document showing an “orchestrated media plot” to tarnish the Eastern Cape Premier and provincial government. “The ANC rejects abuse of media power and in particular the hidden oppositional party political agenda driven by some in the media under the cover of investigative journalism,” ANC spokesman Zizi Kodwa said.

Despite denials by the newspaper that the document was legitimate and concerns raised by the South African National Editor’s Forum, the Deputy Minister of Communications Stella Ndabeni-Abrahams has repeated the claims during her department’s budget debate in Parliament.

“The revelations of a document purported to be a Daily Dispatch news diary, which if it is proved to be a Daily Dispatch internal document, shows and proves the well reported media agenda against the ANC and instead of it being media they are playing oppositional party politics. Responsible journalism requires of our media to look at itself objectively,” she said.

“The recent judgments by the Press Ombudsman and the Appeal Panel against the Sunday Times, Daily Dispatch, City Press and the many apologies published by these newspapers (including Business Day) confirm the deterioration of journalistic standards, continued non-compliance with the Press Code, and the ineffectiveness of self/co-regulation,” Ndabeni-Abrahams said.

Both Kodwa and Ndabeni-Abrahams have flagged the intention to explore other methods of regulating the media. While threats of a media tribunal had subsided, it appears to be back in vogue with constant complaints of a “media agenda” against the ANC and President Jacob Zuma. Speaking during the debate on the Presidency budget vote on Tuesday, ANC deputy chief whip Doris Dlakude said the media was “misleading” the public that Zuma did not want to be held accountable. She said this was not true as the president had sufficiently accounted to Parliament.

The renewed attempt to “regulate” and curb the media – the Protection of State Information Bill is still on the president’s desk waiting to be signed into law – is just one of the signs of a creeping draconian state that rules by force.

Operation Fiela, the government’s combined police and military operation in response to the spate of xenophobic attacks, continues to target migrant communities and foreign nationals under the guise of “national security”. Despite outrage from human rights and civil society organisations about the harsh treatment and arbitrary removal of foreign nationals from their homes, government is vigorously pursuing the operation under the pretext of an anti-crime drive.

While the country is coming to grips with a new visa regulations effective from next week, which will make South Africa a country with one of the tightest immigration regimes in the world, a whole new big brother proposal is on the table making it even less attractive to live and visit here. A raft of alcohol control measures is contained in the Liquor Policy Review, one of which proposes raising the legal age for drinking from 18 to 21 years.

The review proposes new restrictions on alcohol advertising and the promotion of liquor through sponsorships of sports teams and entertainment events. Sponsorships of South Africa’s national football and cricket teams will thus be affected. If the proposals are accepted, there could also be new restriction of trading hours for liquor outlets across the country.

While restrictions to curb alcohol abuse would be welcome, the enormous impact on the economy and the undertone of a nanny state cannot be ignored. It will take government from managing the way society operates to interfering in people’s lifestyles.

And it is not as if government is all too clear about its roles and responsibilities as it is. On Tuesday a legal opinion presented to Parliament’s portfolio committee on Communications showed that the Minister of Communications Faith Muthambi acted unlawfully when she interfered in SABC Board matters. This was after three board members were removed. In March, Muthambi told the committee that she had the powers to control the affairs of the corporation as the “sole shareholder” of the SABC. But the legal opinion stated that removal of the board members were invalid and illegal.

In a milieu of general chaos in state owned companies, this might not seem too significant. But in the context of increased efforts to control the flow of information to the public, with the SABC being the most powerful medium to do so, the combination of Muthambi’s interference and chief operating officer Hlaudi Motsoeneng’s mission to create a kowtowing public broadcaster is extremely dangerous.

The biggest test to Zuma’s administration remains how it will handle the Marikana issue. It is the ultimate test of the government’s commitment to justice and respect for human life. While there are worrying signs of a state that is trading compassion and human rights for an iron fist approach, society is still waiting to see how the president will act to ensure justice for those who were killed at Marikana in 2012.

Speaking during the presidency’s budget debate in Parliament on Tuesday, Democratic Alliance leader Mmusi Maimane said: “Every minute that passes without this report being made public cheapens the lives of every person massacred at Marikana. The miners, their families, the lives of all South Africans are diminished by the President’s delay.

“Mr President, today I call on you to let the truth be known. Let justice take its course, even if it means that some of your closes allies are implicated. I make this call knowing that you have a track record of dodging accountability, and a history of protecting those closest to you,” Maimane said.

During the debate, Economic Freedom Fighters MPs held up posters calling for the release of the Marikana report. Zuma, who has been in possession of the report since the end of March, said he would release it by the end of June. “I know and appreciate the anxiety of those who are affected. However, it would be inappropriate for me to just release the report without applying my mind sufficiently,” Zuma said.

But a leader with his finger on the pulse of the nation would know that the longer the report’s release is delayed, the more injustice is visited on the people of Marikana and the value of human life diminished. A state that kills and then evades responsibility for its actions cannot claim to be abiding by our constitutional values.

The Preamble of the Constitution states that our elected representatives should:

Heal the divisions of the past and establish a society based on democratic values, social justice and fundamental human rights;

Lay the foundations for a democratic and open society in which government is based on the will of the people and every citizen is equally protected by law;

Improve the quality of life of all citizens and free the potential of each person; and

Build a united and democratic South Africa able to take its rightful place as a sovereign state in the family of nations.

Kragdadigheid was embraced by the Apartheid government as a show of force to control society with an iron grip. The South African state appears to be gravitating from what the drafters of the Constitution envisaged to what the enforcers of Apartheid used to protect an unjust and abusive state. It might not present itself as a total onslaught as yet, but the warning signs cannot and should not be ignored. DM