Parliament diary: Placards, a date for the Marikana report, and an F-bomb 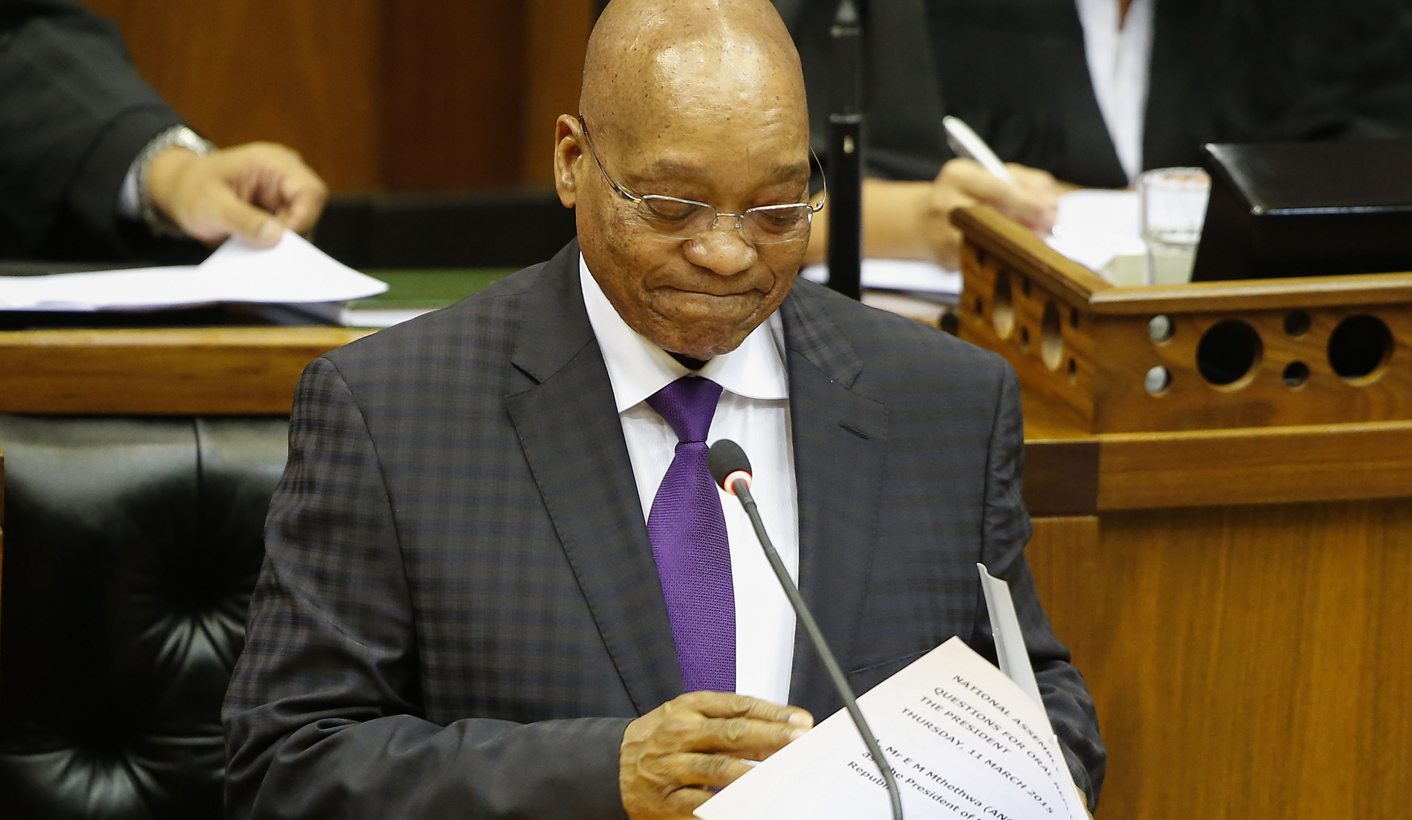 When Mr President comes to Parliament, you can be assured of a rousing time in the National Assembly. President Jacob Zuma was in attendance on Tuesday to present the Presidency’s budget vote, but during the subsequent debate opposition parties used the opportunity to lash him for Marikana, Nkandla and generally inept leadership. ANC MPs were in a fighting mood of their own, however. By REBECCA DAVIS

If President Zuma was hoping for an easy ride in Parliament for once, one glance at the Economic Freedom Fighter MPs would have corrected that misperception. The EFF’s parliamentary caucus arrived in the National Assembly on Tuesday carrying pieces of paper bearing the words “RELEASE MARIKANA REPORT” in red letters – a reference to the Presidency’s silence on the question of when the findings of the Marikana Commission will be released.

The MPs brandished their placards every time the ANC caucus applauded, or a speaker paused for breath. Speaker Baleka Mbete rebuked them: “If you can’t hold those papers quietly, leave what you are doing and just be orderly!”

But the EFF didn’t have to wait long for Marikana to make its way on to the agenda. Pre-empting further haranguing – and possible legal challenges – President Zuma announced that the report would be released “before the end of next month”.

Zuma said: “I know and appreciate the anxiety of those who are affected. However, it would be inappropriate for me to just release the report without applying my mind sufficiently.”

This line went down about as well as can be imagined with the opposition parties. Democratic Alliance leader Mmusi Maimane, in his first speech since taking up the leadership of the party, accused the President of “telling us that the lives of black workers are cheap” by withholding the report.

Maimane suggested that Zuma was stalling in order to protect “members of [his] inner circle” who might be implicated by the findings of the Marikana Commission. Maimane singled out Deputy President Cyril Ramaphosa, former Police Minister Nathi Mthethwa and beleaguered Police Commissioner Riah Phiyega as among those whose reputations might be tarnished by the report.

“Honourable President, I believe that black lives, like all lives, matter,” Maimane said.

Similar sentiments were expressed by the EFF. “You always fail the nation,” EFF MP Hlengiwe Maxon accused Zuma, with regards to the delayed report release. She also accused him of wanting to “cook” the results just as he “cooked” the R24 million she said that the Presidency spent on food in a recent year. “You are the Masterchef of wasteful expenditure,” Maxon said.

When he wasn’t gesturing at a vague future date for the release of the Marikana report, President Zuma was sounding some stern notes about the ills of South African society. Zuma endorsed once more the “moral regeneration movement” that he himself spearheaded, and said that Presidency would continue to engage faith-based communities. He condemned the abuse of drugs and alcohol, and said that the treatment of drug dealers would be “merciless”.

On a foreign policy note, Zuma expressed enthusiasm at the increasing cordiality of relations between the USA and Cuba. He also said that the continuing exclusion of African countries from the UN Security Council was unconscionable.

Only a few hours prior to the debate, Stats SA had released figures showing unemployment rising to 26,4% and first-quarter growth slowing to 1,3%. Nonetheless, ANC speakers chose to take a resolutely positive approach to the “good story to tell”.

Minister in the Presidency Jeff Radebe pointed out that South Africa continued to attract the most foreign direct investment in Africa, despite the naysaying of opposition parties. He also said that South Africa’s growth rate compared favourably with that of the European Union: “Our economy is rebounding, albeit at a slow pace.”

Later in the debate, the DA’s Chief Whip John Steenhuisen accused the ANC of cherry-picking their figures. He said that a recent report showed that South Africa had fallen out of the world’s top 25 destinations for foreign direct investment.

Deputy President Cyril Ramaphosa brought up the issue of a national minimum wage, and commended Parliament’s Labour portfolio committee for having embarked on a national consultation on the matter. Ramaphosa also attempted to allay concerns about the status of the country’s ailing parastatals. On Eskom: “Governance and leadership challenges…are being addressed”. On SAA: “The going concern status of the airline has been restored, costs have been reduced and operational efficiency is improving.”

Notably absent from Ramaphosa’s address was any mention of his controversial new e-toll plans.

A side-show from veteran IFP leader Mangosuthu Buthelezi saw him propose a constitutional amendment creating the post of Prime Minister in South Africa, to separate the head of state from the head of the government. The DA’s Michael Cardo, meanwhile, proposed a constitutional review of the President’s powers in making appointments to key institutions.

At the end of the debate, the DA’s Steenhuisen said it was clear that the ANC had torn up the Constitution altogether and replaced it with the Freedom Charter. (In fairness, ANC MP Zephroma Dlamini-Dubazana did previously refer to the Freedom Charter as “our Bible”.)

Deputy Trade and Industry Minister Mzwandile Masina galvanised the House when he rattled off a string of insults to refer to the DA’s Maimane, who had by that stage left the building. Among them: sell-out, traitor, drug-lord, sex-pest. The DA objected, and Masina briefly had to take a seat while acting Speaker Thoko Didiza considered the issue.

During that time, the DA’s Steenhuisen accused Masina of having leant over to the blue party and mouthed “I will fuck you up”. This account was backed by the DA MP Dianne Kohler-Barnard, who offered to supply “any number of affidavits” confirming that she had seen Masina mouth this threat too.

The historical record suggests it’s likely Masina did say that. Back in 2013, when Masina was the ANC Youth League’s national convenor, he stated in a press conference that Numsa’s general secretary Irvin Jim must “fuck off”.

The ANCYL later attempted to claim that Masina had said “fork off”. From a report at the time: According to the league [fork off] meant “to divide in branches, go separate ways” and has been used as early as the 14th century in the English language.

More potshots were ahead when EFF MP Mbuyiseni Ndlozi told Deputy President Ramaphosa that as a rich man, he would find it difficult to enter the kingdom of heaven. Ndlozi also informed the President and the entire ANC caucus that they were “morally, ethically, and cognitively sick”.

ANC deputy minister Buti Manamela was entrusted with the “sweeper” role in the debate, which traditionally entails giving the insults back. Manamela obliged, reserving most of his address for an attack on the absent Maimane.

Maimane’s attempts to claim a Struggle history were “bull” Manamela said: “You don’t know the smell of teargas or a burning tyre in the streets of Soweto where you come from!”

Manamela also ridiculed the interview Maimane carried out with CNN’s Christiane Amanpour, during which Maimane was referred to as the “Obama of Soweto”. Manamela compared the acclaim to “a little kid being given a lollipop”, and said that Maimane should have objected to not being compared to a great African leader instead of Obama.

Cue IFP’s Mangosuthu Buthelezi on his feet: is Obama not “a son of Africa from Kenya?”

Parliamentarians: always with their eyes firmly fixed on the important stuff. DM