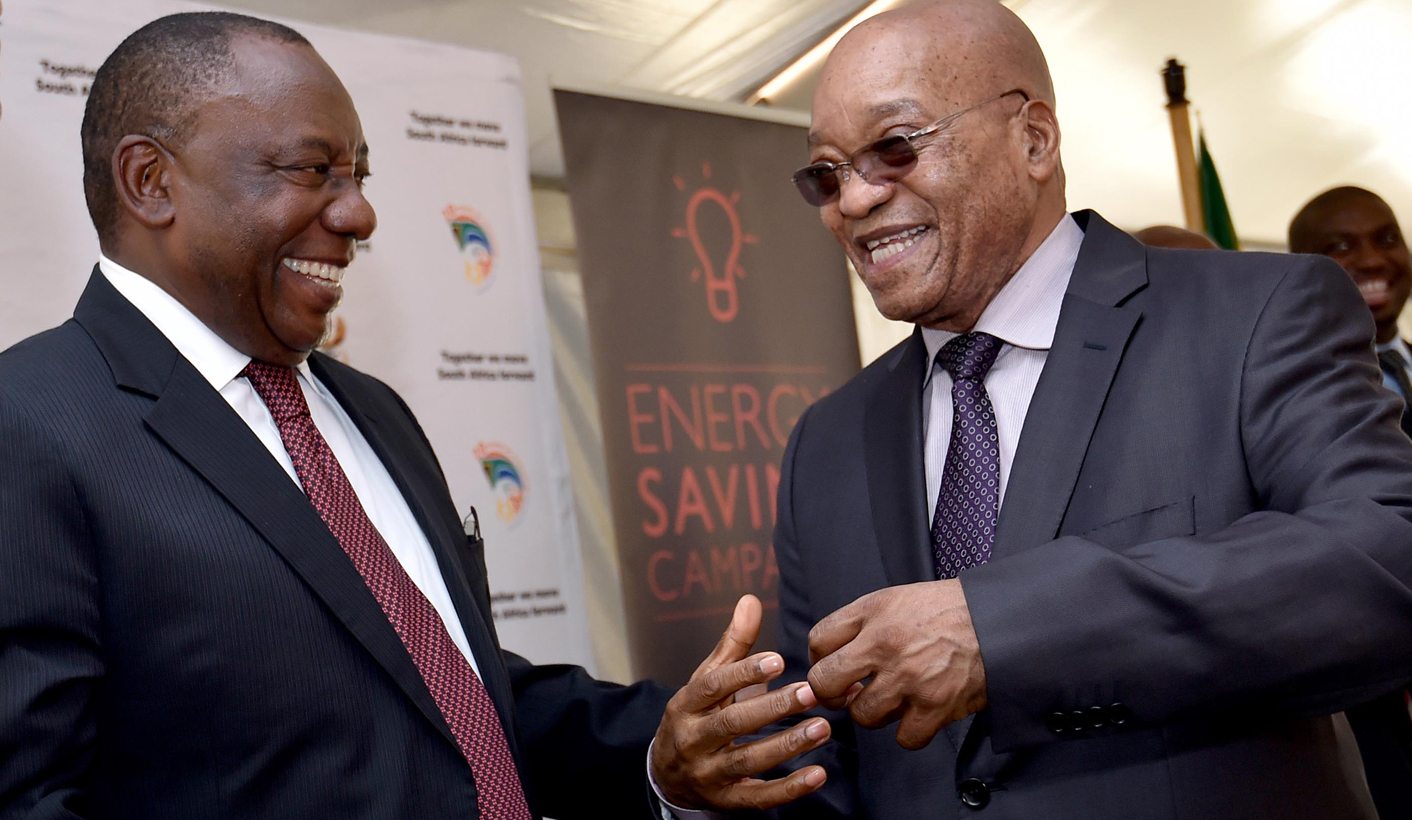 In the May 2014 elections, the ANC dropped support in Gauteng by 11 percentage points. There is no way of telling how much e-tolls contributed to this, but it certainly was a contributing factor. Gauteng Premier David Makhura was barely in office when he announced the appointment of an e-tolls advisory panel and in October, the ANC in Gauteng declared that it “does not support the implementation of e-tolls in their current form”. The “new dispensation” announced by Deputy President Cyril Ramaphosa has been dressed up as a major concession to pacify those who were opposed to e-tolls. In some ways, it is now even more loathsome to road users. It may result in an even bigger political dilemma for the ANC and its alliance partners. By RANJENI MUNUSAMY.

Is the new e-tolls dispensation an easier sell on the local government elections campaign trail? Will the ANC, struggling to keep control of the Johannesburg and Tshwane metros, be able to say to voters next year “Look at the tremendous markdown in e-toll costs we got for you” and will voters respond “Yes, we no longer object to paying e-tolls”?

That is the big dilemma now for the ANC in Gauteng. There is no more room to manoeuvre. There are no more cards to play. Following Deputy President Cyril Ramaphosa’s announcement on Wednesday of “far-reaching changes” for the repayment of the Gauteng Freeway Improvement Project, they are stuck with e-tolls and the concomitant political burden (yes, that was deliberate).

Ramaphosa said the new dispensation came as a result of engagement with the Gauteng government, and took into account the recommendations of the advisory panel established by Premier David Makhura. This included the recommendation that the e-toll system “should be reviewed to address the questions of affordability, equity, fairness, administrative simplicity and sustainability”. The panel also recommended “a hybrid funding model should be found that includes significantly reduced tariffs, monthly caps and financial contributions by the Gauteng provincial government and national government”.

That is not exactly what the ANC in Gauteng wanted. The declaration of its provincial conference in October stated: “Conference does not support the implementation of e-tolls in their current form.” The channel to articulate its objections was the premier’s advisory panel.

“The ANC in Gauteng should make a submission to this panel. Conference accepts the user pay principle but Gauteng’s economy benefits the whole country. The current system is too expensive. Traffic flow is negatively affected by urban tolling. We would rather have a fuel levy for this administered by SARS (the South African Revenue Service),” the conference declaration read.

In its recommendations on a mixed source of revenue streams, the advisory panel said there should be a “ring fenced national fuel levy for the benefit of investment in a national integrated transport system”. It said a provincial fuel levy was not advised. The panel also recommended increasing and ring-fencing the cost of road advertising, ring-fencing a portion of motor vehicle licence fees and recovery of funds from the construction industry to mitigate costs.

In drawing up the new dispensation, national government cherry picked from the panel’s recommendations and opted for a package of reduced costs per kilometre and a lower monthly cap. The “reduced costs”, however, just extend the costs per kilometre of those who had e-tags to all motorists, and as Outa chairman Wayne Duvenage pointed out, the monthly cap can always be raised later.

The sting in the tail of the altered e-tolls system is the link to the renewal of motor vehicle licences. This effectively puts a gun to the head of car owners and is aimed at strong-arming people into paying their e-toll bills.

It is doubtful whether the ANC in Gauteng envisaged that at the end of the process, motorists would end up being even angrier than when the system was first implemented. But there is not much they can do now. The presence of Makhura at the media briefing, sitting alongside Ramaphosa as he made the announcement, means that the premier now has to own and defend the new e-toll system.

The ANC in Gauteng also can no longer disown the system. It resolved to make submissions to the panel, and these were taken into account in the redesign. It will be difficult to continue to rebel against the system because it did not turn out to be what they thought it would. And with their deputy chairperson being co-signatory to the new package, it means it belongs to them too.

In an interview with Stephen Grootes on 702’s Midday Report, the ANC Gauteng provincial secretary Hope Papo admitted that the new system was not really what they had wanted but said it was a “better option”. The problem for the ANC, however, is that people in Gauteng are so dead set against e-toll system that no matter much the reduction is, it will still result in defiance from motorists. In fact, there is likely to be even more defiance as some people might opt to go without renewing their vehicle licence discs.

While legal challenges in the courts are likely to ensue, opposition political parties such as the Democratic Alliance (DA) and Economic Freedom Fighters (EFF) will continue to benefit from the disgruntlement of Gauteng motorists. The fight back on e-tolls is a readymade campaign for the DA and EFF as they look to continue to chip away at the ANC’s support base.

The ANC’s national leadership has long ago accepted that e-tolls were here to stay. ANC secretary general Gwede Mantashe is on record repeatedly defending the e-tolls. He has said people should not consider them to be a pest, but should rather appreciate the world-class infrastructure they made possible. There is unlikely to be too much sympathy for the Gauteng ANC’s predicament of having to again campaign in a crucial election in a province full of cross people.

The ANC in Gauteng are not the only people in a dilemma. Cosatu’s leaders seem also to find themselves in an uncomfortable position. The trade union federation has always been fiercely opposed to the e-tolls. Previously, when Cosatu was not bogged down with its leadership battles, it ran a formidable campaign against e-tolling and also lodged its objections with the Gauteng advisory panel.

But Ramaphosa appears to have snookered the already battle-weary Cosatu leadership. Prior to the public announcement, Ramaphosa briefed Cosatu’s national office bearers about the new system. So while Cosatu’s 2012 National Congress resolution against e-tolls stands, its leaders might be in a dilemma about how to respond to the new system when the deputy president took the trouble to brief them about the redesign. Remember also that this is the Cosatu leadership minus the chief agitator Zwelinzima Vavi, who was most outspoken against e-tolls.

Cosatu’s statement on the new system was therefore quite subdued. The normal fire and brimstone about e-tolls was noticeably absent although it did call for a scrapping of the system. “To suggest that ‘settlement of e-tolls will be linked to motor vehicle licence renewal and that all motorists must settle any outstanding e-toll fees before vehicle licence discs are issued’, may cause a lot of inconvenience in the pockets of many road users,” Cosatu said.

The matter is to be discussed by Cosatu’s central executive committee next week and it will be interesting to see whether the federation without the militants such as Vavi and the Numsa leadership will decide to continue the aggressive campaign against e-tolls.

If Cosatu decides to dial it down, it will be nothing compared to the complete capitulation of the South African Communist Party (SACP). In its statement, the SACP said the outcome of the consultation process on e-tolls represented “a positive step forward”. It said problems with the freeway improvement project from the onset “unfortunately committed the country into a debt that must be paid”. The SACP headily continues to claim to be the voice of the Left when it has acquiesced to ordinary people running up more debt to fund infrastructure costs.

All this places the Alliance in quite a fix ahead of next year’s local government poll. E-tolls are here to stay, and so too is the defiance from hundreds of thousands of road users, who are also voters. What message could the ANC and its alliance partners send out that would separate anger over e-tolls from support for party?

Perhaps election posters that say “Sorry about e-tolls, but we still have a good story to tell.”

Meanwhile for Messrs Maimane and Malema, the e-toll gantries are like complimentary election billboards, constantly reminding road users of a government constantly draining their pockets – a political gift that is likely to keep on giving for years to come. DM