Domestic threat: Should the SANDF be deployed as crime fighters? 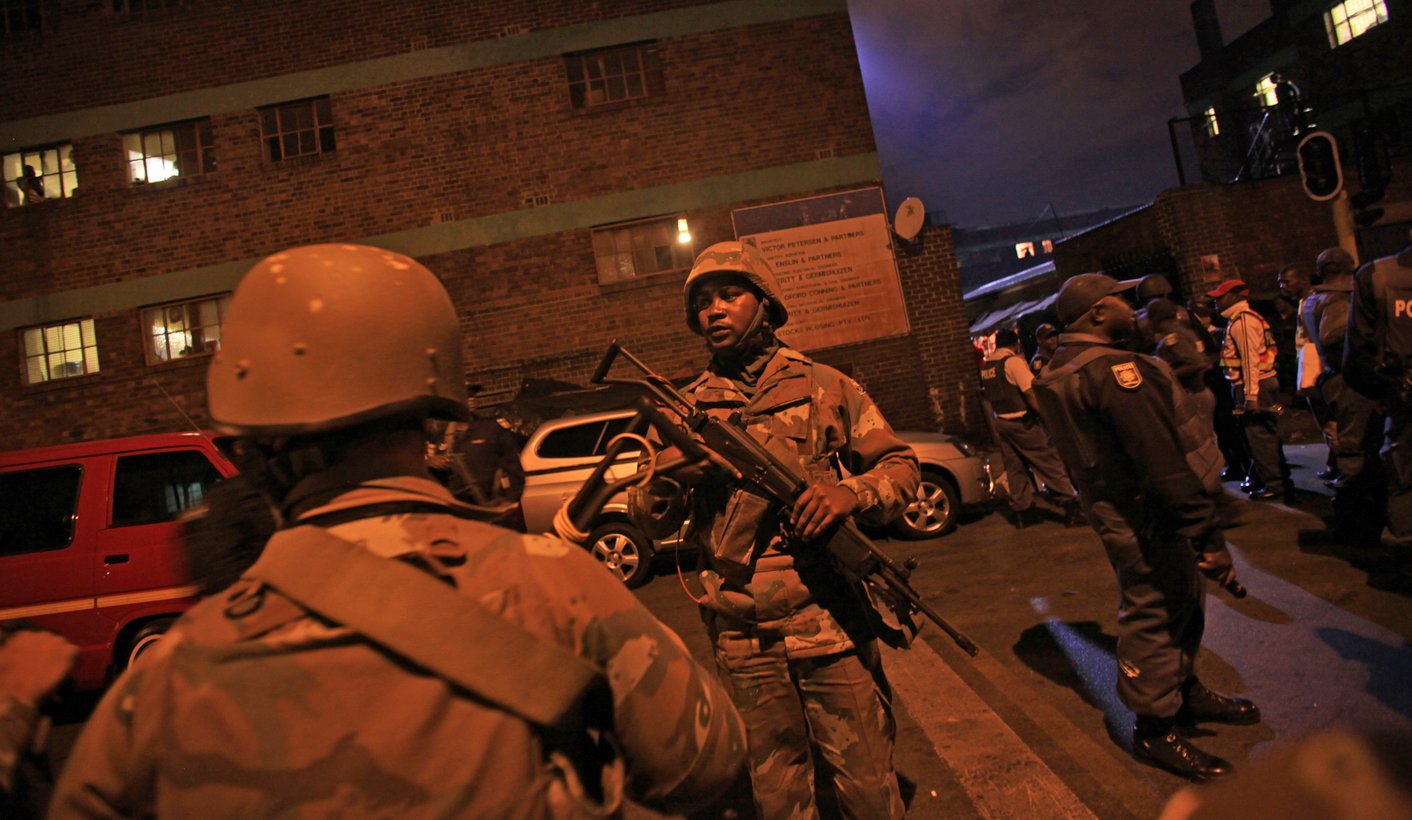 When the South African National Defence Force was deployed in April, many observers applauded. The state was finally taking xenophobia seriously. The operation has since turned to cracking down on criminal activities, although there are allegations the security forces are targeting foreigners and dissidents. Should the army still be on South Africa's streets? By GREG NICOLSON.

On 21 April, Defence Minister Nosiviwe Mapisa-Nqakula stood outside the Alexandra police station and explained why the South African National Defence Force (SANDF) were being deployed domestically. After the Sunday Times showed images of the murder of Emmanuel Sithole (now referred to as Emmanuel Josias), the state hoped that it would be the last of the attacks on foreigners, which began weeks earlier. But then a Zimbabwean couple was shot in the area and it was time to act. “We thought that was the last we saw. Now for us to even get information that in fact there are still attacks on migrants, on foreign nationals in this area, well then it’s time for us to move in,” explained Mapisa-Nqakula.

The state was slow to move on the xenophobic attacks, caught up in perception and image – criminality versus xenophobia versus Afrophobia – and treading lightly on King Goodwill Zwelithini’s inflammatory comments. So when they army was finally deployed, many observers welcomed the move. Almost immediately, the violence calmed.

Yet the SANDF is still raiding communities with the police, now in the name of combating crime. It raises questions about both the objective of Operation Fiela-Reclaim and whether the army should be involved

President Jacob Zuma’s statement on deploying the SANDF did not in fact mention migrants or xenophobia. A release from the presidency said Zuma informed Parliament that 338 members of the SANDF would be employed until 30 June “to assist the South African Police Service (SAPS) to maintain law and order in KwaZulu-Natal, Gauteng and any other area in the Republic of South Africa as the need arises”.

Describing the operation on Sunday, Minister in the Presidency Jeff Radebe said it responded to community concerns about lawlessness and aimed to rid areas of criminals. He said 3,914 people have been arrested across the country, including 2,264 South Africans and 1,650 undocumented migrants. Those detained include two human trafficking suspects, a Zimbabwean in possession of explosives, and 10 suspects found with R7 million worth of heroin. There have been 45 firearms confiscated and almost R25 million of copper and gold seized at the border.

Radebe categorically denied the operation is targeting foreign nationals. Last week, however, civil society organisations accused the state of turning the focus of the anti-xenophobia operation to foreigners. The police and army have been accused of legitimising xenophobia while active in areas where foreigners are prominent and raiding buildings including the Johannesburg Central Methodist Church. Lawyers for Human Rights filed court papers after raids in the Johannesburg CBD showed the security forces had routinely rounded up and arrested both South Africans and foreigners in the early morning, ignored their right to legal counsel, and then ignored a court order demanding the enforcement of their rights. These abuses concerned only hundreds of the thousands arrested and might suggest further disregard for the law as Operation Fiela continues. In Thembelihle, community activists accused the state of using the operation for political motives.

On Tuesday, Democratic Alliance Shadow Minister for Defence David Maynier said the exceptional circumstances required for deploying the army within South Africa no longer exist. “There is no reason for the Defence Force to be deployed in a crime-combating operation being conducted countrywide by the South African Police Service,” he told Parliament.

In the past the state has been reluctant to deploy the army to combat crime. After Western Cape Premier Helen Zille requested SANDF intervention in the Cape Flats to combat gang violence, defence review committee chair Roelf Meyer said, “We can’t allow soldiers to go around the streets of South Africa armed in a way that will lead us back to things that happened in the past and we definitely can’t go to that and that is creating the impression of a military state.” Meyer briefly served as defence minister from 1991-92.

Speaking on Sunday, ANC secretary general Gwede Mantashe dismissed civil society accusations that human rights abuses are occurring during Operation Fiela. While not addressing the details of allegations, he said protecting communities from crime supports their human rights. On the deployment of the army, Mantashe said the ANC supported the security cluster if it decided the SANDF needed to back up the police.

Rather than whether the army should be deployed, Mantashe said the discussion should focus on “this thing of liberal human rights”. “There is security of the country and security of individuals in society. And when you see varying conflict in society you must appreciate that the country has a responsibility to protect everybody in society and not just say, ‘Human rights say you do not protect others, allow people to do as they wish in a country’. Therefore Operation Fiela in our view should be seen as an attempt to rid the country of the illegal component and the undocumented component of immigrants in South Africa.”

Gareth Newham, Institute for Security Studies head of governance, crime and justice, however, said the SANDF should not continue to be involved in the operation because the deployment was political – it happened days after the xenophobic violence was under control. “Good democratic practice requires that the army should only be deployed in exceptional circumstances when the police are not able to maintain law and order,” he explained. “The further the military encroaches on domestic security challenges when it is not necessary, the greater the negative consequences for human rights and democracy.” DM