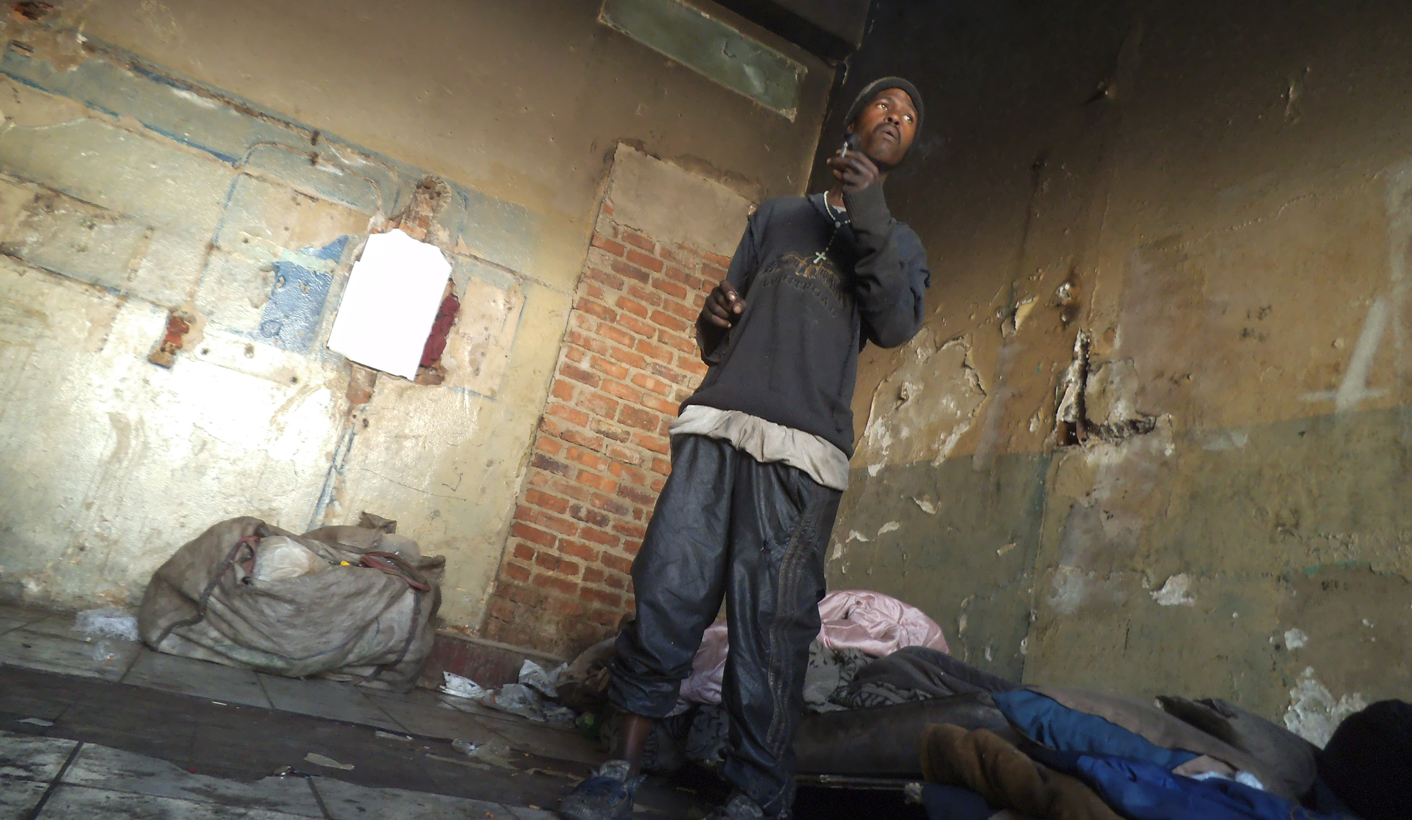 Beneath Johannesburg’s apparently “world-class” surface is an underbelly that is scarcely fit for human habitation. Here, the forgotten people eke out a frightening existence. GUSHWELL BROOKS spent some time with them.

If you had to ask Gauteng Premier David Makhura or Johannesburg Mayor Parks Tau to describe the city of Johannesburg, they would tell you that it is “a World Class African City”. It makes sense: that is how you get politicians and businessmen from Shanghai, Washington DC, Berlin and New Delhi to board business class flights and private jets to sign multibillion rand deals in Africa’s most valuable square mile. With all due respect to Abuja and Lagos, Johannesburg is where the heart of the African economy beats.

Add to that Johannesburg’s international, cosmopolitan appeal with trendy fashions, expensive supercars and cool nightlife, and it makes you feel as if you are in the middle of Manhattan on a Friday night. Beneath the glitter and glam, money is sheltered from the underbelly of a Darwinian struggle for survival, where poverty and deprivation leave human beings tussling for basic essentials such as food, shelter and even water. Anyone that considers themselves a Joburger would easily tell you which neighbourhoods to avoid, “because things are rough there, you could get mugged during broad daylight and nobody would even consider giving you assistance”. Sheltered naivety ignores a fundamental truth – poverty and crime are no longer only associated with certain suburbs; they have spread and sit on the doorstep of wealth.

First National Bank’s headquarters, Bank City, in the Johannesburg Central Business District (CBD), is the home of multibillion rand wealth. Within a few paces’ distance of it, is South Africa’s second oldest insurance company, Mutual & Federal. Between these leviathans of corporate wealth towers, however, stands a building where no window seems to be intact, and at ground level small businesses seem to barely survive on loose cigarette and airtime sales. As you walk into this building, past the piercing glances of the security guard posted behind the heavy security gates, reminiscent of a maximum security prison, and as you ascend the dark stairwell, a stark realisation hits you between the eyes: Bank City across the street is a completely different and alien world.

From the second floor wrap-around balcony, overlooking the apartment building’s courtyard, you are greeted with the sound of an open tap and water hitting the hollow interior of a large plastic container, the decrepit smell of old sewage, refuse and the sight of a queue of people waiting for their 25-litre plastic containers to be filled. Nkhulumo was the first person there who was willing to talk to me and tell me his story. He had been living in this building for two years and in his time there, none of the units had ever had electricity or their own water supply. Despite this, a monthly rental of R500 per room occupied is expected. Rental is not paid per occupied flat as would be expected, but rent is due and payable per room occupied. My guide through this maze of abandoned buildings in Johannesburg’s CBD is Mr Sam Ncube. He confirms that up to two thousand people might be living in this building alone, where each unit or flat has many individuals and/or families sharing the space. “You don’t rent a flat, you rent a room here,” he tells me.

Photo: (Left) A line of 25 litre containers can be seen as people fill up on their water supply for the day. (Right) The view of the courtyard, littered with rubble and sewage.

Rose*, unwilling to talk or use her name at first, exclaims: “The South African government abandoned black people!” She has been living in the building for thirty years. Like Sam, Rose confirms that the trouble started in 2005 when the erstwhile owners started charging electricity separately from the monthly rental.

“I used to pay R1,800 a month for rent and electricity was included in the amount. In about 2005 they started charging for electricity separately and then we were charged between R700 and R800 a month for electricity. The people revolted, stopped paying and the owners disappeared. In September or October 2005, the electricity supply to the building was cut and soon thereafter the water supply as well. The water supply was reconnected so that one tap worked throughout the building,” Sam recounts.

By March 2006, a white man, spoken of as a phantom of sorts, with no real confirmation of his name – although Rose refers to him as Van der Boss – was flanked by Nigerians that seemed to double as his bodyguards and members of a private security company. He told the residents of the building that they were looking after the interests of the owners and that they would collect rent from that point onwards. Clement Nduku, another of the building’s residents, explains how rent is collected: “They come late at night. They lock the security gate downstairs and then the Nigerian security guards knock on each flat door to collect rent, in cash, R500 per room.”

Much has been made of the “anti-xenophobia” and crime prevention operation, Fiela-Reclaim, by the police and the military, in and around the Jeppestown hostels and the Central Methodist Church. Nduku, originally from Zimbabwe, tells me that they raided this building as well: “They raided here and took about 200 people and these people were paying rent.”

It is dark, with no electricity supplied throughout the entire building; the courtyard is covered in sewage and rubble, one tap supplies water to the entire building and the toilets do not flush, and yet these people have to pay R500 a month. Per room! Who lives like this and pays to live under such circumstances? Peter and Maggie*, a couple that live in the building, answered my question very calmly: “It’s either this, or living on the streets.”

Sam takes me to another building, less than a kilometre away from artistic centre of the city, the Maboneng Precinct. Here the building has been stripped of all its doorframes and windows and is now no more than a hollow, dark shell of brick and mortar. Despite common sense advising me to the contrary, I follow him into the building, where a cold chill descends through my being as I realise that the four scruffy-looking informal recyclers he introduces me to all have needles sticking from their arms. It hit me like a baseball bat to the jaw; this shit just got real!

Photo: Sam Ncube in front of the second building we visited as part of our investigation into abandoned buildings in Johannesburg CBD.

Themba* agrees to answer my questions, with the occasional assisted commentary from his friends. What would have been an elaborate, glass shop front years ago, now fails to separate the inside from the outside. The three remaining walls are lined with disgustingly filthy mattresses, and at the entrance sits a young woman on a dirty mattress, surrounded by a makeshift wall of bits of Masonite and chipboard, held in place with strategically placed rocks and bricks.

“I have been living like this for a year and nine months to two years. We recycle cardboard boxes, plastic bottles and plastic for money,” Themba tells me.

As he recounts his story, I cannot move my gaze from his arm, with the needle sticking out of it, so I ask him: “What is that you are injecting in your arm?”

With no change in tone, as if it is part of normal conversation, he simply answers: “Oh, it’s heroin.”

Photo: Themba injecting himself with heroin.

“A hit costs R20; I spend R200 to R300 day on heroin,” he tells me. Quick, basic arithmetic suggests that he spends up to R9,000 a month on his habit, despite his emaciated, physically ill and vagrant look. He spends twice the amount the Economic Freedom Fighters have suggested as a monthly national minimum wage on his heroin habit. As Themba tells me his story of Johannesburg Metro Police Department (JMPD) raids, where they are kicked into the streets and have their blankets confiscated, a middle-aged man, seemingly out of place, walks in casually sits next to the next woman on her mattress. “He is there to buy sex,” Sam tells me. There, where you are in open view of the street, with a woman who probably shares needles with Themba and his mates, with a woman who has not been able to take a bath in months – the thought twists my guts with nausea.

I wanted to ask so much more of Themba, for instance: has he ever mugged anyone to satisfy a fix? All he told me was that drugs led him here, but what else could he tell me? I accessed a world I didn’t think existed but for exaggerated anecdote, and it was dangerous; I was standing in the wolves’ den and needed to get out of there for my own safety. I had seen so much, but I had not even scratched the surface.

To whom are people paying rent, when the owners of these buildings have seemingly disappeared? Why has the city not done anything about this but to evict people from buildings just to have those buildings filled by someone else weeks or months later?

Sam’s words best sum up the situation: “What vexes me the most is that the city knows that there are buildings that are not fit for human habitation, so why not demolish these buildings? Some of these buildings have shops below, with water and electricity supplied to these shops, but the people above don’t have access to these. The city should know what is going on, including the police.” DM

Main photo: Themba, telling his story, with the needle still stuck in his right arm.