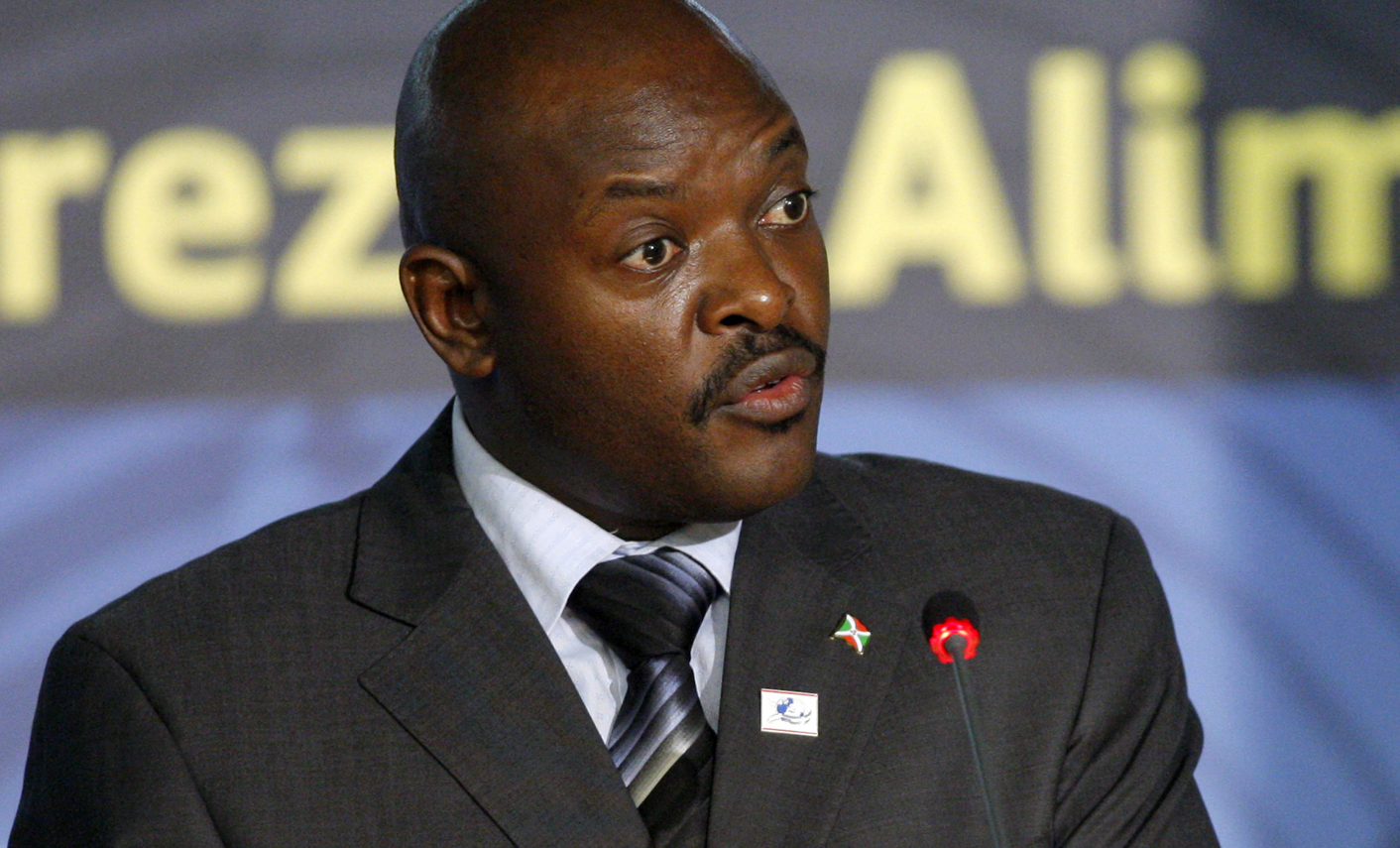 While President Pierre Nkurunziza was stuck in Dar es Salaam tweeting up a storm, his former intelligence chief was busy taking over the country. Many welcomed the coup, celebrating in the streets of Bujumbura, but it’s far from clear who (if anyone) actually controls Burundi – or what it means for the country’s fragile democracy. By SIMON ALLISON.

“President Nkurunziza is dismissed, his government is dismissed too,” said Niyombare on Tuesday as soldiers loyal to him surrounded the state broadcaster, the airport and other key government buildings. Niyombare was reacting to the president’s controversial attempt to run for a third term in office, in apparent violation of both the Constitution and the Arusha peace accord which ended the country’s long civil war, and his declaration was welcomed by anti-Nkurunziza protestors.

President Nkurunziza initially dismissed the coup as a joke, and his presidency stringently denied reports that the he’d lost power in a series of increasingly bizarre tweets. “The situation is under control, there is no coup in Burundi,” read one.

While information on what exactly is going on is still scarce, it is clear that the situation is not a joke, nor is it under control, as Nkurunziza will have learned when his plane was reportedly turned away from Bujumbura airport late Tuesday night.

But while Nkurunziza’s not in charge any more – for now, anyway – it’s far from clear that Niyombare has enough support to take his place. The police, who have largely disappeared from the streets of Bujumbura, are thought to be loyal to Nkurunziza, while the army’s allegiance is unclear and likely to be divided. Complicating things further is the role of the Imbonerakure, the youth militia which Nkurunziza has allegedly armed – will they fight for the president, or accept the transition period promised by Niyombare’s junta?

But the role of the army is crucial. “…[W]ithin the military there are internal divisions – with former Hutu rebels regarded as loyal to the ruling party and those in the old Tutsi-dominated army seen as loyal to the opposition. The surprise about this coup declaration is that it comes from Gen Niyombare, once a close ally of the president. However, it is unclear whether the general, fired as intelligence chief in February, can command the loyalty of all soldiers,” wrote BBC Africa’s Venuste Nshimiyimana.

As of now, it’s still too early to know if this is a successful coup or merely an attempted coup.

It also complicates African efforts to mediate the crisis in Burundi. The reason Nkurunziza was out of the country in the first place was to attend a summit on Burundi organised by the East African Community. The proceedings of the summit were effectively nullified by the swiftly changing events on the ground, and its final resolution to temporarily delay elections will become redundant if Niyombare’s coup succeeds.

Significantly, the summit condemned the coup, resolving that “The Summit is of the view that the coup does not solve the problem of Burundi.” This is standard protocol for African diplomacy, which has in recent years taken a firm stance against unconstitutional changes in power, and the African Union was quick to follow suit: “In this respect, the Chairperson [Nkosazana Dlamini-Zuma] condemns in the strongest terms today’s coup attempt in Bujumbura, calls for the return to constitutional order and urges all stakeholders to exercise utmost restraint and refrain from any act of violence likely to lead to further loss of lives, population displacement and destruction of property,” said the AU in a statement.

Less publicly, Dlamini-Zuma might not have been entirely displeased. Burundi’s situation is unusually ambiguous: a strong argument can be made that in hanging on for a third term, Nkurunziza himself was unconstitutionally changing power by preventing a legitimate, elected successor from taking office. In this reading, the coup – if its promise of a swift return to democracy can be taken at face value – is actually safeguarding Burundi’s constitutional order.

The AU, through Dlamini-Zuma, has up to now appeared to favour this interpretation. Dlamini-Zuma has been uncharacteristically outspoken in condemning Nkurunziza’s attempt to run for a third term, viewing it as a violation of the Arusha Agreement which it is supposed to guarantee. If the coup succeeds, she may be saved the hard work of getting Nkuruniziza to back down – or the embarrassment if he successfully defied the continental body.

For now though, Burundi and the continent is playing an anxious game of wait and see. In the best case scenario, the coup attempt and the popular support it enjoys is enough to convince Nkurunziza to give up on his ambitions of hanging on to power, allowing him to see out the last few months of his term with democratic elections to follow; and the coup leaders, having made their point, allow this to happen. In the worst case scenario, the fragile edifice upon which Burundi’s peace rests collapses, taking the country back to the dark days of its brutal civil war. For now, it’s too early to tell which direction Burundi is going. DM

Photo: President of Burundi Pierre Nkurunziza delivers a speech during a session of the World Summit on Food Security organized by the Food and Agriculture Organization (FAO) at its headquarters in Rome, Italy on 16 November 2009. EPA/ALESSANDRO DI MEO / POOL