Analysis: Why the Yemen conflict matters for Africa 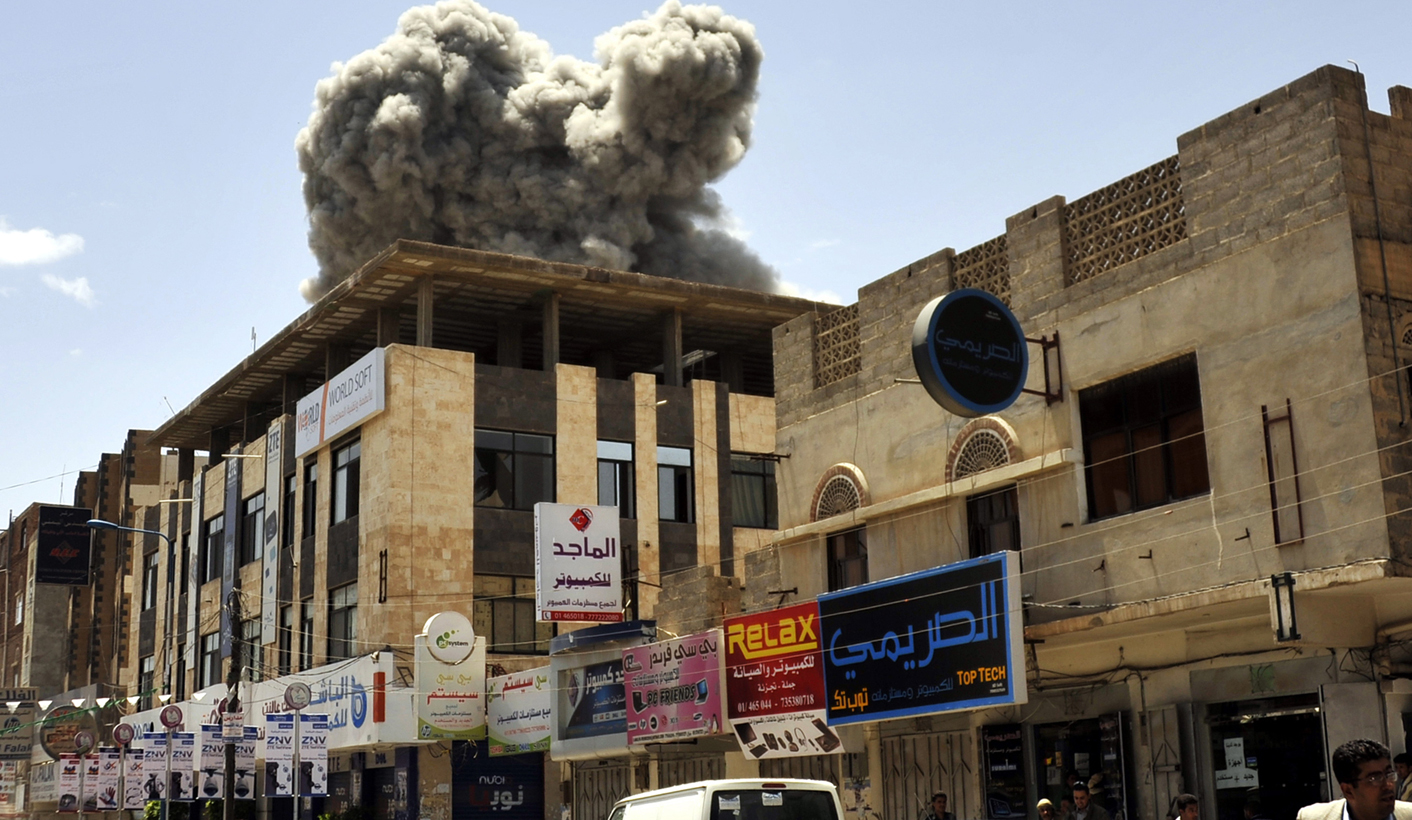 You might think Africa has enough conflicts of its own to deal with, without having to worry about those on other continents. Yemen, however, is fast becoming an African war too – which means we all need to pay attention. By SIMON ALLISON.

On Tuesday, just hours before a proposed humanitarian ceasefire was due to come into force in Yemen, Saudi-led air strikes dumped another load of bombs on the capital Sanaa. If the ceasefire is respected – and it should be, given that Saudi Arabia proposed it – these should be among the last attacks for the next five days.

This pause is also a chance for all the parties embroiled in the conflict – the semi-legitimate government on the run, the Houthi rebels that have occupied the capital, and the various countries that have been dragged into the fighting – to reflect on their involvement.

This Middle Eastern war might seem a bit removed from the bump and grind of African politics, which surely has enough conflict of its own to deal with. But that’s before one realises that nearly half of Saudi Arabia’s international coalition against the Houthi rebels comes from Africa.

Egypt, Morocco and Sudan are providing air support; Senegal has pledged ground troops in the event of an invasion; while Somalia is allowing the coalition to use its air space, territorial waters and even military bases if necessary.

There has even been at least one African casualty (the only casualty suffered by the coalition so far): a Moroccan F-16 fighter jet was apparently shot down on Monday by the rebels, with the pilot presumed dead.

So what, exactly, are African countries doing fighting in another continent’s war?

Their motivations aren’t all the same, as Peter Fabricius explores in an excellent piece on ISS Today. Egypt’s purpose is the most straightforward: with its pan-Arab ambitions and the indebtedness of the current regime to the Arabian Gulf’s deep pockets, Egypt’s participation just makes sense. And from a strategic point of view, Egypt is desperate to protect shipping through the Red Sea, which could come under threat if Yemen’s Houthi rebels were to gain complete control.

For Morocco, Senegal and Sudan, money is probably playing a large factor. The Saudis have plenty of it to dish out, and these are all countries that could do with a little extra. It comes as no surprise that Saudi Arabia announced a massive investment programme in Senegal at around the same time as Senegal promised troops.

But money can’t explain everything. No country can publicly justify conflict on the basis of finances alone; there must be an ideological explanation too. And here the Saudis, as the guardians of Islam’s two holy cities Mecca and Medina, have a potent recruiting tool. As Sudan explained in an official statement: “Our participation comes out of the Islamic responsibility to protect the land of the Two Holy Mosques, Mecca and Medina, our religion and our belief, and is why Sudan participated in a strong way for the prevention and for our pride to keep Saudi Arabia safe and stable and our sacred shrines protected. We will not stand idly by while danger hits the direction of Muslim prayer: Mecca.”

Saudi Arabia has also been at pains to portray the Yemeni conflict along sectarian lines. Especially (and without a huge amount of supporting evidence), it has sought to portray the Houthi rebels as Shia Muslims funded and controlled by Iran, and therefore posing an existential threat to Sunni Muslims everywhere.

So far, Saudi’s combination of financial and ideological appeal has successfully drawn African countries into the conflict in Yemen, giving the intervention a sheen of international legitimacy.

This is not the only facet of the war in Yemen that concerns Africa, however. Even more significant, perhaps, is the plight of refugees caught up in the conflict – both Africans stuck in Yemen, and Yemenis fleeing to Africa.

There are over 250,000 registered refugees and asylum seekers from Somalia, Ethiopia and Eritrea in Yemen; people who had fled from danger in their own countries only to find that the fire was hotter than the frying pan. That’s a quarter of a million Africans who are stuck in a war zone with little prospect of escape. “The reality is that there are limited options for people to get out. Some have fled by boat, but many ports are closed, and fuel is an issue so the options for escape are indeed limited,” said a spokesperson for the United Nations Refugee Agency (UNHCR).

Meanwhile, UNHCR is preparing for an influx of thousands of refugees – both returning Somalis and fleeing Yemenis – into Somaliland and Puntland, the relatively safe semi-autonomous areas of Somalia, and Djibouti. It’s a sign of how bad things have become in Yemen that Somalia is a potential safe haven, although this will put a huge strain on the local capacity to provide humanitarian aid, which is already over-stretched.

Geographically, this makes sense. The Bab el-Mandeb Strait, which divides Yemen from Djibouti and Eritrea, is just 32 kilometres wide. Politically, however, the distance seems further. Though with five African countries involved in the Yemeni conflict, and tens of thousands of refugees both from and to Africa impacted, it shouldn’t. DM

Photo: Smoke rises above the residence of former Yemeni President Ali Abdullah Saleh following an airstrike carried out by the Saudi-led alliance in Sana’a, Yemen, 10 May 2015. According to reports, the Saudi-led coalition’s warplanes bombed the residence od Saleh, who is accused of supporting the Houthis, as well as on the province of Saada, even as the Houthis accept a five day humanitarian ceasefire due to begin 12 May. EPA/YAHYA ARHAB