Op-Ed: Lest we forget the truth about World War Two 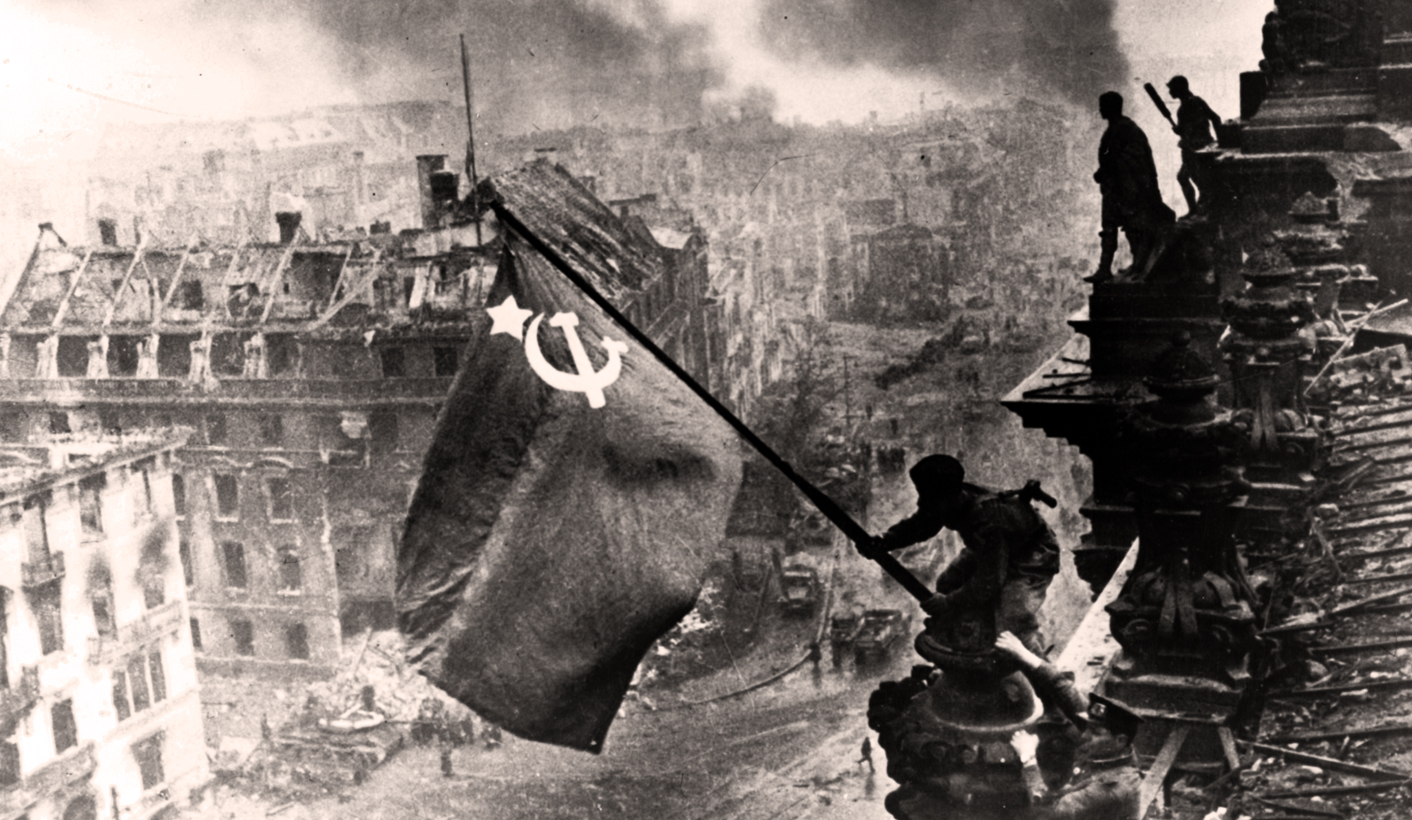 Who won World War Two and what was that epic struggle about? Why should this be so important to us today? Seventy years ago such questions were not thought relevant. Of course the Allies, essentially America, Britain and the Soviet Union, had vanquished Nazi Germany and its axis with Japan and Italy. All sides of the anti-fascist alliance fought bravely at tremendous cost, but none doubted that the fiercest and most prolonged fighting was on Germany’s Eastern Front. By RONNIE KASRILS.

After the biggest battles in history, the Soviet Red Army had crushed its adversary and by May 1945, it had captured Berlin. In the words of Britain’s wartime leader, Winston Churchill, it was the Soviet Red Army that had “torn the guts” out of Hitler’s forces.

Unfortunately, with the advent of the Cold War, and nowadays geo-political factors, Western governments have striven to rewrite history. Russia now is the opponent, and the enormous debt and respect the world once displayed and expressed for that country’s role in World War Two is being distorted. Disturbing public surveys in America and elsewhere reveal stupendous ignorance about who participated and what it was all about. In parts of Europe such as Kiev, public displays hail the crimes of Nazi collaborators and criminals and those opposing are lynched in the streets.

The Cold War propaganda being advanced is that the main thrust of Germany’s defeat came from Britain and America. Cited is the Battle of Britain (1940) when courageous RAF pilots thwarted German’s Luftwaffe in their aerial bombardment of that country’s cities. Britain’s General Montgomery’s victory over Rommel in the Libyan campaign of 1943 is another essential event referred to. And paramount in the reckoning of just what caused Germany’s collapse is, apparently, the Anglo-American landings at Normandy, June 1944, which opened up the Western Front, at a time when Germany was in headlong retreat from advancing Soviet forces in the east.

Photo: American soldiers and supplies arrive on the shore of the French coast of German-occupied Normandy during the Allied D-Day invasion on June 6, 1944 in World War II. (AP Photo)

There is no arguing that these and other theatres of the conflict were important, such as epic struggles in Italy, Greece, Yugoslavia, through to the Far East conflict with Japan, and the resistance in China, as well as the war in the Atlantic sea lanes and the Pacific. These saw enormous courage and sacrifice in bringing the fascist forces to heel. All aspects of the war effort were vital, including the invaluable contribution in equipment and resources supplied by the USA.

The main theatre of the war, however, without any shadow of a doubt, took place on Germany’s Eastern Front with the Soviet Union. That confrontation commenced on 22 June 1941, with Hitler unleashing the largest and most powerfully equipped invasion force in history. The aim was nothing short of the utter destruction of the USSR, and particularly Russia.

Operation Barbarossa, as the anti-communist crusade was code named, involved 120 fascist divisions, some 1.5 million troops, along a front from the Baltic to the Black Sea, including several fascist units from countries such as Spain, Rumania, Hungary and pro-Nazi Ukrainians.

Hitler was so confident of success that he boasted of taking Moscow and Leningrad (today’s Petrograd) within six weeks and issued invitations to a victory banquet in the latter city. Initial weaknesses saw the Nazi armies cutting through eastern Poland, the Baltic Soviet Republics, Belorussia and the Ukraine at an alarming rate, with heavy casualties on the Soviet side.

With supreme effort and heroism, the invaders were halted at the gates of Moscow and Leningrad. The latter city was besieged for 900 days with almost one million of its citizens dying from ceaseless aerial and artillery bombardment, and deprivation of food and supplies, before the Nazis were repulsed. The tide turned first in the Battle for Moscow, and then in what is accepted as the turning point of the war, at Stalingrad. That city was under siege from November 1941 to the end of 1942, and after a superhuman effort by the troops under Marshall Zhukov, the Nazi army was defeated. Three hundred thousand Germans were taken prisoner; almost an equal number perished.

Photo: The centre of Stalingrad after liberation

Soviet losses were treble that number. From that point, the invaders were on the retreat, attempting a last-ditch effort to regain the strategic initiative at the battle of Kursk in the summer of 1943, which saw the greatest tank battle in history. Again the Nazis were defeated by superior Soviet forces, determination and equipment. Retreat for the enemy was the only option and they fought grimly to defend German territory and Hitler’s capital. By 1944 the writing was already on the wall when the Western Allies opened the Normandy front at great cost and bravery in the difficult landings from the sea. Allied forces had landed in Italy the year before and slowly advanced north. A reflection of where the fighting raged in Europe is that, in June 1944, the Germans had 150 divisions deployed on the Eastern Front and 66 divisions in the Western Front.

The culmination of the war took place in the battle for Berlin, where the Red Army finally vanquished the Nazis, who capitulated on 8 May, 1945. Hitler and several of his henchmen had committed suicide on 30 April. The war in the Far East ended in August, after America dropped atomic bombs on an already defeated Japan. It was widely recognised that the unnecessary obliteration of Hiroshima and Nagasaki, with 350,000 Japanese civilian deaths, was a signal to the Soviet Union, that its erstwhile ally possessed unimaginable power and could do with their then monopoly of atomic weapons what Germany had failed to achieve.

Hitler’s evil propaganda minister, Joseph Goebbels, had already forecast that with Russia’s victory, “an iron curtain would ring down across Europe.” In those final days of the war the Nazis were hoping that America would agree truce terms with them, and that as allies they might act against the Soviet Union and communism. German militarism had gone too far, however, in attacking Britain, France, the Netherlands, Belgium, Poland, Norway and Denmark, and in the unimaginable crimes committed across the continent. The attempt with Mussolini’s Italy and Japan to replace the British Empire with a new world fascist order was unforgivable. Common interests of survival against Hitler’s onslaught had led to the wartime alliance with Russia. Post war geo-politics became the new international divide. It was Churchill, echoing Goebbels, who warned the Americans at a speech at Fulton, USA in 1946, that together with Britain they needed to end their alliance with Russia and draw battle lines in a Cold War era.

There is no acceptable reason that Western leaders should have been so insulting as to boycott celebrations that were honouring their wartime ally and the enormous sacrifices that were made. Propaganda and lies are being generated in the West to conceal the true character of the Second World War, and the enormous debt humankind owes the Russian and former Soviet people. They undoubtedly bore the brunt of the conflict, and saved the world from fascism. Yet those selfsame Western leaders, using Nato, have been manoeuvring to once again ring Russia with hostile states. In the Ukraine they support neo-Nazis who murder people in the streets with impunity; and encourage Kiev’s onslaught against the Donbas Region in the east on Russia’s border.

The Second World War cost sixty million lives. An estimated 27 million were Soviet citizens. Eleven million Soviet troops gave their lives compared to 900,000 of the combined American and British forces. That is not counting the unimaginable destruction of an estimated 90,000 villages, 1,000 towns, 100 cities and enormous infrastructure on Soviet territory. Apart from Pearl Harbour there was no major attacks on the American mainland. It is well known that the Nazis consigned six million Jews to the gas chambers. Many millions of communists, gypsies, gays, Slavs, Poles, anti-fascists from Germany and all over Europe, Russian and other prisoners of war, perished in those death camps as well. Unbelievable slaughter of resistance fighters and civilians, women and children took place in counties all over Europe at the hands of the Nazi Storm Troopers, Gestapo and their henchmen. Five million Nazi troops and one million German civilians perished mainly through aerial bombardment from the West, including Britain’s firebombing of Dresden’s civilian population. The ravages and war crimes perpetrated by Japan’s imperial army in Asia saw the deaths, in China alone, of seven million civilians and three million soldiers. Korea and other countries took heavy casualties.

There is no reason not to honour all who contributed in the war to halt fascism. By concealing the truth for geo-political reasons, the youth of the world are prevented from learning historical lessons. The danger is that future generations are condemned to commit the same mistakes all over again. Fascism is on the rise in many parts of Europe. The contagion can spread and must be halted by the same determination and unity evidenced during World War Two.

On 9 May in Moscow, after the military parade, those watching witnessed the procession called “The Immortal Regiment” where 300,000 Muscovites, of all ages, carried photographs of fathers, mothers, grandparents and even great-grandparents who had died or served in what is referred to as “The Great Patriotic War.”

Attending the celebrations were leaders from former Soviet Republics, China, Cuba, India, Venezuela and Zimbabwe, as well as South Africa’s President Jacob Zuma. South African troops fought bravely in World War Two to free Ethiopia from Italian aggressors, and in the Allied campaigns in North Africa and Italy. The Smuts government recruited Coloured and so-called Native detachments. The latter were not permitted to carry weapons and ludicrously performed guard duty armed with spears and knobkerries. Others proved extremely brave and effective as stretcher-bearers. Men like Lucas Majozi, from Zastron, and Job Maseko, from Kwa Thema, received high military awards for their outstanding bravery. At the end of the war, like all Africans who had served, they were also given army coats and bicycles. Just under twelve thousand South Africans gave their lives on the battlefields. ‘Sailor’ Malan, became a legend for his role in the Battle of Britain. Victor Swales of Durban received the Victoria Cross. In an act of crass ignorance, iTegwene Metro had a city street, VC Swales, which was named after him, changed.

Victory over fascism saved the world from slavery and catastrophe. It also spelled the end of the colonial system and saw the emergence of African independence and armed liberation struggles such as ours that were primarily armed and supported by the Soviet Union and the socialist camp. Jacob Zuma and his generation of Umkhonto weSizwe combatants, along with the youth of the Soweto Uprising, and counterparts from Zimbabwe, Namibia, Angola, Mozambique, Palestine, Vietnam and Cuba, were beneficiaries of that unstinting internationalism.

We must never cease in educating the people in historic lessons such as what happened in World War Two; and its connection with our own struggle for freedom and democracy. When a youth leader proclaims that he admires Hitler, it is time to wake up. DM

Main photo: A Soviet soldier putting the Soviet flag atop the ruins of the Reichstag in Berlin in May, 1945. (Yevgeny Khaldei)