Diary of a fieldworker in Liberia: ‘No touch’ and other stories 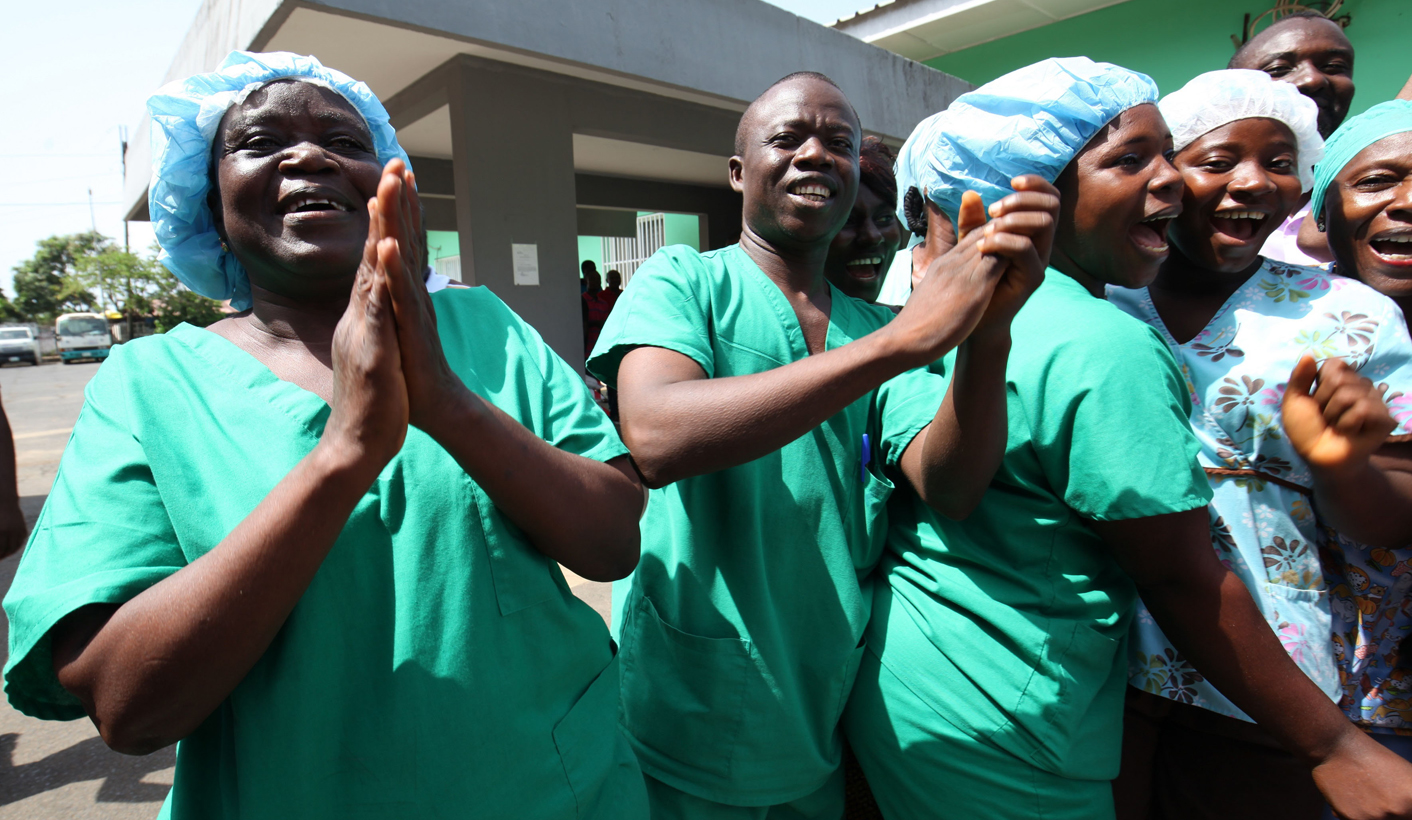 On 9 May, Liberia was officially declared Ebola-free. It was a long, hard road to get to this point – and a nervy 42-day wait without new patients before the declaration could be made. CLAIRE WATERHOUSE, a fieldworker with Doctors Without Borders (MSF), writes about her experiences in Monrovia before her return to South Africa last month.

Before arriving in Liberia, I was warned several times about ‘No Touch’, meaning the policy in Ebola missions not to touch a single other human being while on mission. I knew it would be tough and take some getting used to, but come on, how hard can it really be?

It’s hard. It’s the smaller things: when a colleague has a tough day and you want to pat their shoulder, when you meet someone new and want to shake their hand (side note: despite all the warnings, the first thing I did upon leaving the airport was try to shake my driver’s hand when I met him. He politely ignored it). The hardest part is not touching your own face, though. I break this rule all the time, despite my best efforts.

But the more unexpected side effect of this rule has been in how I react when others touch, even on TV. I’ve found myself visibly flinching every time there’s any casual contact on a show I watch. A back pat, a thigh touch, a handshake, a shove – my gut reaction is of fear mixed with panic. It doesn’t last long, but it’s there and it makes my heart skip a beat. Some of my other colleagues say they experience the same feeling. How are we going to live in the real world again?

The most dangerous job in any Ebola mission is working in the high-risk zone, where patients are kept, and the precautions taken here are far more extreme. Getting ready to go into the high risk zone is a very complicated procedure. It’s more complicated to come out, of course, but going in is quite the song and dance too.

I’ve watched people getting the kit on and off several times now. There are so many layers and steps that it seems like the process will never be complete. But when it is, when the last glove has been snapped on, the last mask tied into place, the time of entry written on your shoulder and your name written on your head, there is a small moment of peace between the two people going in (you are not allowed in alone in case you faint from heat or dehydration). After they do their final goggle adjustments in the mirror, they grab each other’s triple gloved hands and look down. They share a moment of silence. For many staff, this is a time for a small prayer; for others, it’s a moment to say the names of those they love most out loud. Then, they let go, take a deep breath and step over the threshold. And then there’s no going back.

That last moment is something I’ve seen dozens of times now but it touches me every time. We tend to get blasé about the risks being taken in the Ebola context, but that moment really reminds me how much is at stake with every entry into the high risk zone.

Then there’s re-entry. It’s impossible to understate just how important precision is in this moment. But it’s also the hardest moment to stay focused. By this point, people have been sweating profusely in a high heat and intensity zone for about an hour. Many have been doing very physical jobs like moving patients, cleaning rooms, and disinfecting everything touched by a patient.

To exit, you have to follow a very specific set of instructions. There’s a hygienist with a chlorine spray who monitors and tells you what to do. It goes something like this: get a full chlorine spray down. Remove first layer of gloves. Dunk gloves three times in chlorine water. Wash hands in chlorine water. Untie first mask. Dunk three times in chlorine water. Wash hands in chlorine water. You get the idea. The process takes about 10 minutes and there is a point at which everything except your final mask is off – your scrubs are soaked in your own sweat, the smell of chlorine is everywhere, and then the sprayer tells you to remove your final mask and throw it away. Without fail at this point, the person flips off the mask and just stands there, so out of breath that you’d think they’ve just run a marathon. It’s such a reminder that being inside that suit is like doing an hour of intense cardio. Those who go in come out physically exhausted, not to mention emotionally traumatised by the things they’ve seen. Finally, after one last spray down, they’re allowed to step over the barrier into the low risk zone and drink some water and pour the sweat from their boots.

Expats come and go but our national staff have been doing this day in and day out for nearly a year now. They’ve seen friends, family and countrymen die in the centres and out on the streets. They’ve seen colleagues get sick and, in terrible cases, die. They’ve been stigmatised by their communities who fear them, and they’ve been worked to the bone to try to end the epidemic.

They truly are heroes.

Which is why you can probably imagine the heartbreak that ran through our project and the chills that ran up our spines when we heard, in March, that there was a new positive case of Ebola in Liberia for the first time in a month.

The patient was diagnosed in our transit unit while I was there, and the sense of disappointment and sadness, not to mention denial, was palpable. All of us were nothing short of devastated.

And that’s not even mentioning the poor patient herself – a woman with children who lived in a crowded building in a one room flat and worked as a food seller at a school. Not only was she terrified of her own fate but also that she’d mistakenly infected so many others.

She was transferred immediately to our Elwa 3 centre and then to another treatment unit not run by MSF, who did everything they could for her. She didn’t make it. Hers is not a face I’m going to forget easily.

And now we wait. We wait another 42 days to see if Liberia can be declared Ebola free. We wait to see if she infected others. The cruellest part of Ebola is that it infects those closest to you. So we watch her four children and husband most closely, after they helped clean her vomit and wash her while sick. We watch the people she bought goods from in the market. We watch the hundreds of school children she came into contact with. And pray.

So far so good, but it means little until the 42 day mark is passed.

Despite the new case, the tough decision was made to go ahead with closing our treatment centre.

So, at the end of March, the world’s largest Ebola treatment centre closed its gates (here’s a video of a drone flight over Elwa. It’ll go some way to showing the vastness of the place). It was an emotional time. This place has seen thousands of deaths but also hundreds of lives saved. It had seen the blood, sweat and tears of nearly a thousand staff, national and international, working through the days and nights to try to prevent an epidemic of unbelievable proportions. To reach the point where we now feel safe closing the centre is nothing short of a miracle, especially considering that Liberia had the highest infection rate by far initially.

Liberia is far from safe though. With Guinea and Sierra Leone still trapped in the depths of the disease, vigilance is the only thing that can save them from going through it again. And unfortunately vigilance is hard to maintain as people start to relax again. MSF is not alone, however, and is now supported by several new Ebola treatment units open now in Monrovia – thanks to the Chinese, Americans and a couple of other NGOs. The existence of these units allows us to get out quicker and focus more resources on helping the other two affected countries.

So for my last two weeks here, all focus is on shutting down the project properly. The decontamination processes alone will take weeks, and we also need to make sure the land is safe for other uses and that we do our best to move our staff on to other places where they can be useful, give our survivors the best fighting chance of getting back to a normal life, and give everything possible to other organisations and the government. There’s training and paying and cleaning and sorting and archiving and cleaning and cleaning and cleaning to be done.

It’s hard and this mission has been hard from day one. I’ve worked harder and longer than I ever imagined possible. But what a feeling to be part of a movement like this. To know that in some tiny, minuscule way, I too have contributed to the fight against this terrible disease. I honestly cannot express this feeling in meaningful words, but I know that right now it’s probably the only thing keeping me going and on the brink of sanity. DM

Claire Waterhouse will be discussing her experiences on the Daily Maverick Show on Cliff Central (Tuesday, 1pm SA time). Tune in here.

Photo: Nurses and doctors at St. Joseph’s Catholic Hospital celebrate after the announcement that Liberia is ebola free, in Monrovia, Liberia, 09 May 2015. The World Health Organization (WHO) on 09 May declared Liberia free of Ebola after no new cases were reported for 42 days, twice the virus’ incubation period. EPA/AHMED JALLANZO