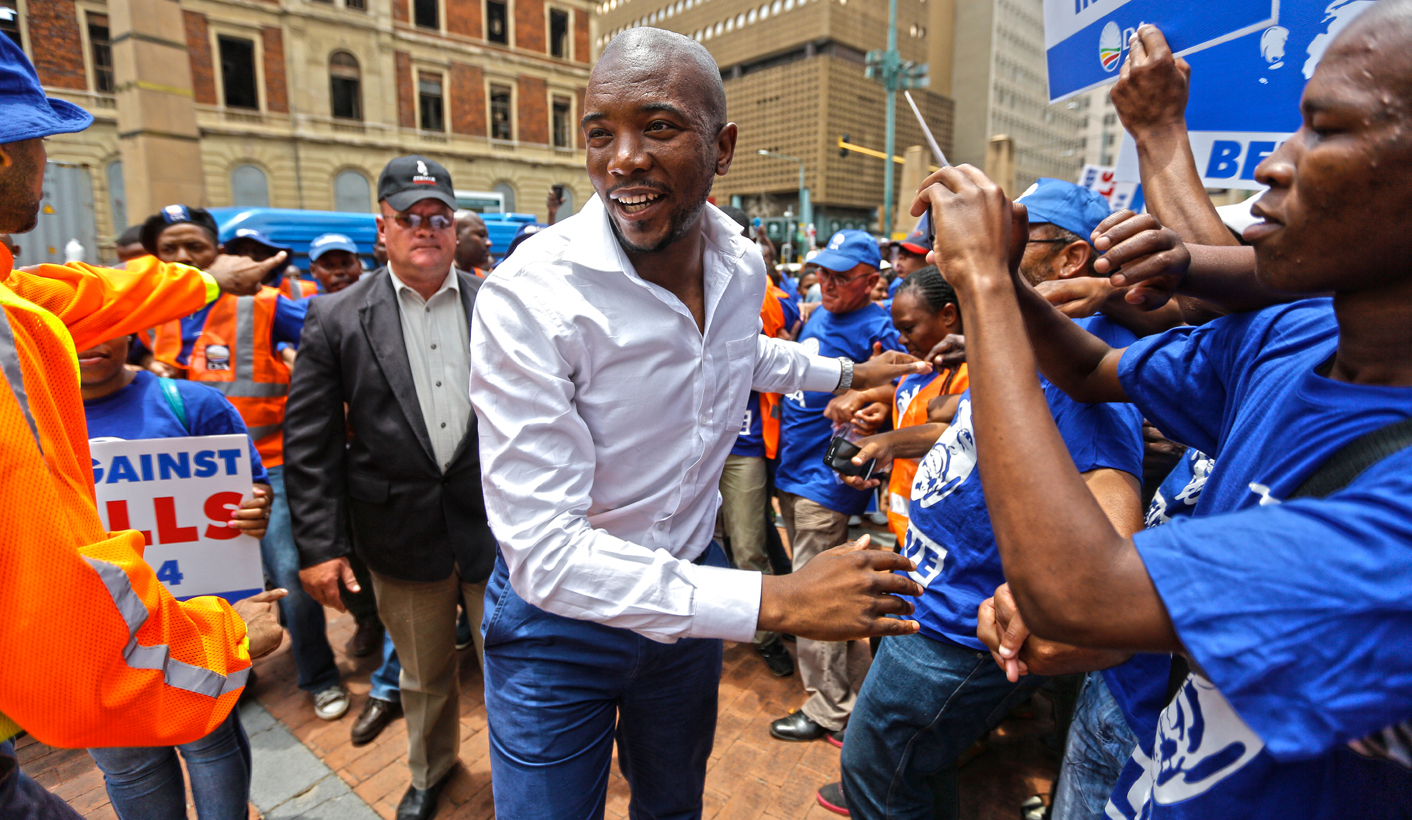 Mmusi Maimane has won the DA leadership race in Port Elizabeth this weekend, making him the first black leader of the party. His first statements condemned disunity, his next nodded to the elections and the DA's plans for South Africa. By GREG NICOLSON.

Maimane enjoyed strong support over the weekend, with delegates picketing for the Democratic Alliance (DA) parliamentary leader during the voting process on Sunday morning. “South Africa needs transformation and Mmusi Maimane is the person to lead that transformation,” said Nelson Mandela Metropolitan University (NMMU) student Lutho Sokudela outside the Boardwalk Conference Centre where the congress was held.

“Mmusi Maimane believes that for our country to grow we must empower the people,” added Naledi Swanepoel, deputy secretary general of the DA Students Organisation at NMMU where the party leads the SRC.

Maimane was up against outgoing federal chairperson Wilmot James, but the leadership vote was seen by many observers as a foregone conclusion. James put up a spirited campaign in the week before the vote, criticising Maimane’s understanding of the Constitution in a televised debate and painting himself as the most likely candidate to return the party to its liberal values. James said that under his leadership the party would offer a viable alternative to the ANC rather than a party trying to cater to many voters but offering none an understanding of what the DA is about.

Maimane, who turns 35 this year, has enjoyed a meteoric rise in the DA. Shortly after joining the party he became its candidate for mayor in the 2011 elections. He went on to lead the party caucus in Johannesburg, became national spokesperson and was the DA candidate for Gauteng premier in the 2014 elections. After the vote he was voted DA leader in Parliament. He built his national reputation as spokesperson, cemented it during the 2014 elections, featuring prominently in rallies, posters and advertisements. In Parliament recently the DA has been largely overshadowed by the Economic Freedom Fighters, but Maimane has become more vocal and delivered a stinging rebuke of President Jacob Zuma after this year’s State of the Nation Address, calling him “a broken man presiding over a broken society”.

Despite Maimane’s likely appointment, he traversed the country during his leadership campaign.

Maimane’s win was announced by departing leader Helen Zille. Fireworks erupted from the stage and young DA members surrounded Zille, singing and dancing, while the former leader stood holding up a piece of paper with “Mmusi Maimane” on it.

In his first speech as party leader Maimane immediately sought to condemn division in the party, saying it will not be tolerated. Sometimes party members disagree, he said, but there would not be room for those who want to divide or mobilise the party on the basis of race. “It is our values that unite us. It is our values that will take us to victory.” He defined those values as freedom, fairness and opportunity, each of them featured as themes of the congress.

Maimane quickly turned to issues of racial inequality. “Non racialism does not mean being colour-blind,” he said. “If you don’t see black than you don’t see me at all.” But he added that skin colour should not define South Africans forever. He also called for more action on poverty and service delivery issues.