Brace yourselves, Somalia: America’s back 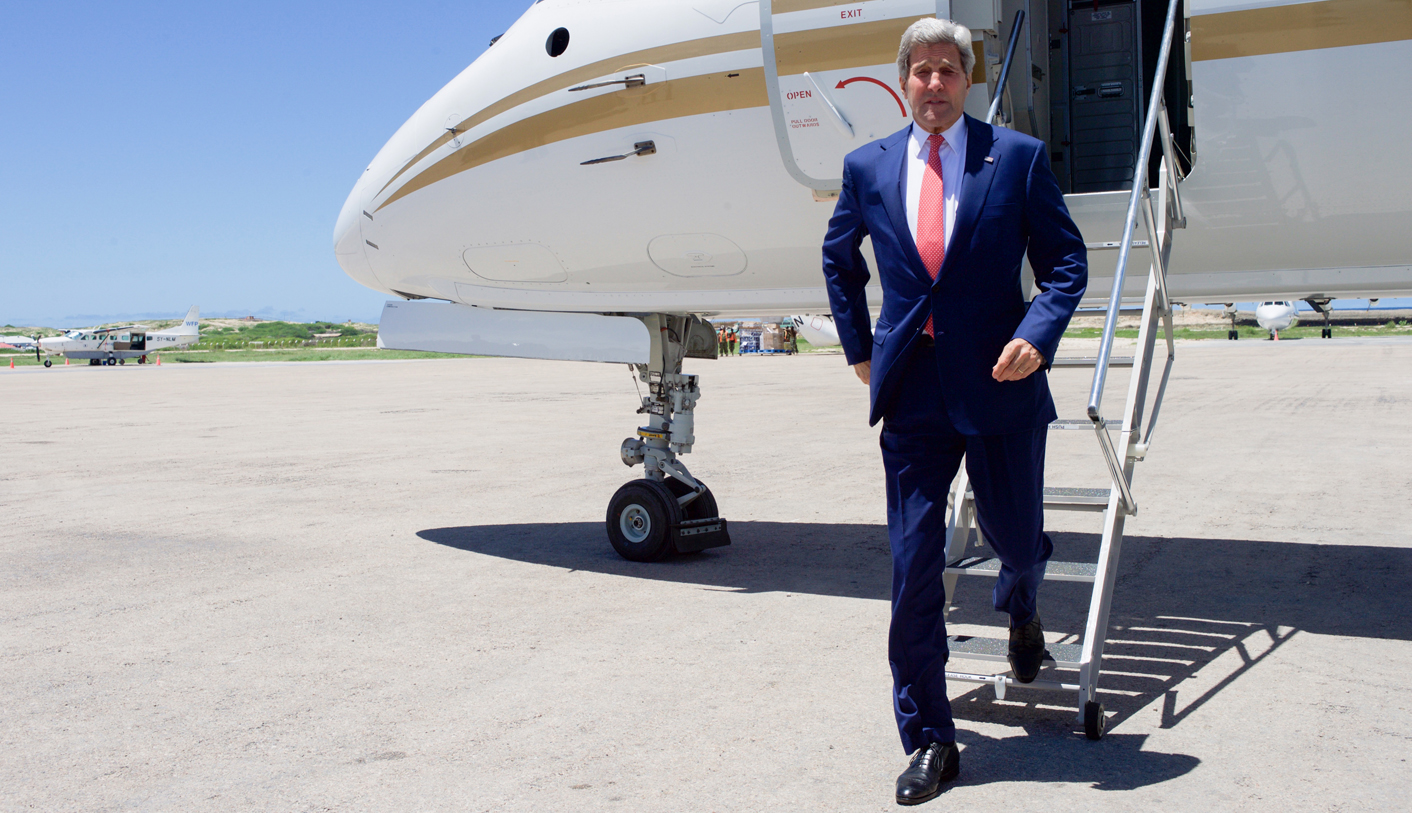 It’s taken the USA a long time to get over the humiliation of Black Hawk Down. With his surprise visit to Mogadishu, US Secretary of State John Kerry finally closed that ignominious chapter, and announced that Somalia would be seeing a lot more American involvement from now on. By SIMON ALLISON.

More than two decades ago, the corpses of American soldiers were dragged through the streets of Mogadishu – the brutal and all too public consequences of a botched raid to unseat an uncompliant warlord. This humiliating defeat was subsequently immortalised in the book Black Hawk Down, and the film of the same name, but the real consequences were less obvious.

Scarred by failure, America’s gung-ho foreign policy was tempered. Not forever, as Afghanistan and Iraq have shown, but for long enough to make a difference (for instance, any kind of military intervention in Rwanda in 1994 became politically unfeasible – instead, a timid US actually pushed for the withdrawal of United Nations troops). The incident also forced US forces out of Somalia, and America has been reluctant to engage directly with Somalia ever since.

Until Tuesday, that is, when Secretary of State John Kerry’s plane touched down at Mogadishu airport. The visit was unscheduled, and brief – Kerry didn’t even leave the airport – but marks a major shift in policy. Brace yourselves, Somalia: America’s back, and has finally banished the ghost of Black Hawk Down.

“I visited Somalia today because your country is turning around,” said Kerry, who met with Somali President Hassan Sheikh Mohamud, as well as several cabinet ministers and the heads of various semi-autonomous regions. “It’s great to be here.”

These are uncertain times in Somalia, as ever, but Kerry’s not wrong: after decades of internecine war, there is an air of cautious optimism around Mogadishu. Al-Shabaab are weakened, and running scared; African Union troops occupy most major towns and ports; the transitional government, while imperfect, is beginning to assert some authority; and elections are scheduled for next year. Maybe, just maybe, there’s light at the end of a long, dark tunnel.

There are still problems, of course. Al-Shabaab may be down, but they’re not out, and continue to launch sporadic attacks at government targets. The elections are almost certain to be delayed. The transitional government relies almost entirely on the presence of those AU troops, without whom it would be a government in name only. And even with their help, the country is divided into several autonomous and semi-autonomous regions that don’t always follow Mogadishu’s diktat (which is why it was significant that the presidents of Puntland and Jubaland were both at the meeting with Kerry). Not to mention Somalia’s deeper, systemic failures – in healthcare and education, for example – which no one has even begun to fix.

Nonetheless, Kerry’s visit represents a major coup for President Mohamud’s administration, and is another sign of a far more muscular American presence in the country. Already, preparations are underway to reopen the US embassy in Mogadishu, and US drones have been active in targeting senior Al-Shabaab members.

“The United States provides critical humanitarian support to Somalia and has made a significant impact in the security sector in taking out al-Shabaab leaders through air strikes and training Somali Special Forces. But in reality, Kerry’s stop is a rare face-to-face moment of diplomacy in America’s largely remote control foreign policy in Somalia,” said commentator Tres Thomas on Somalia Newsroom.

But Kerry’s visit was not just about Somalia. Is it a coincidence that the renewed American interest in Somalia comes shortly after the disintegration of Yemen and the rise of the Islamic State? There is a whole new fault line in the global war on terror, and Somalia has the potential to turn into a major battleground. Its progress is still fragile, and its socio-economic conditions are still ripe for exploitation by radical groups. Al-Shabaab wouldn’t need much more in the way of personnel and equipment to mount a serious resurgence.

According to Al Jazeera, a state department official said that Kerry’s visit “will send a strong signal to al-Shabaab that we are not turning our backs on the Somali people and will continue to engage with Somalia until we bring al-Shabaab terror to an end.” The real question, however, is what, if anything, will accompany this signal.

A tangible answer came slightly earlier in Kerry’s African trip, in Kenya, where the secretary of state pledged $45 million to the Kenyan government to help keep Dadaab refugee camp open. Kenya might be getting the money, but – if the camp does indeed stay open as a result – it means that Somalia won’t have to deal with a sudden influx of returning refugees and the increased instability that would inevitably cause.

It has taken the United States a very long time to get over its Black Hawk Down trauma. Kerry’s visit to Mogadishu was official notice that, finally, the US has moved on, and is ready to play a public role in Somalia once again. DM

Photo:  A handout picture provided by the US Department of State shows US Secretary of State John Kerry exiting a plane as he arrives at Mogadishu Aden Abdulle International Airport in Mogadishu, Somalia, 05 May 2015. EPA/GLEN JOHNSON/US DEPARTMENT OF STATE/