Bow before the Beneficent: Bill, Billionaires and the Clinton Foundation go on safari 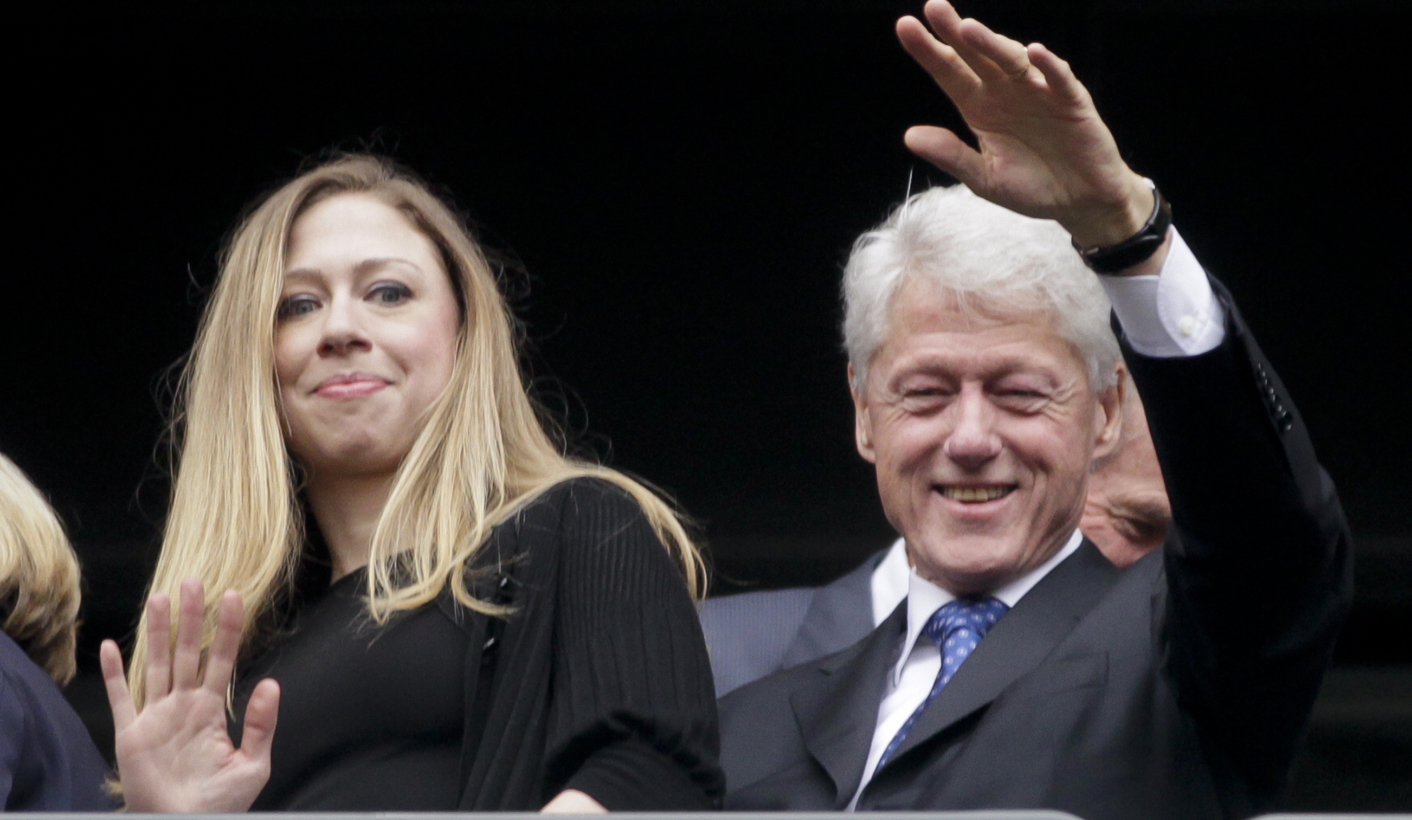 Former US President Bill Clinton, his daughter Chelsea, and their famous Foundation have come to Africa to show us off to big money donors. So put on your best rags, and smile for the iPhones. By RICHARD POPLAK.

O, fellow benighted Africans! Gaze down at the bleeps emanating from your electronic device – a device powered by the marvellous coltan mined on your land. Can you not see the newsflash? Dignitaries, Big Names indeed, have come to our continent in order to help us help them help us.

Fellow African, no less an eminence than former US president Bill Clinton is here to tour the sites of his greatest philanthropic achievements. He is joined by a host of global luminaries, and it is time for the Grand Priests of the Clinton Foundation, the givers who give almost as good as they get, to sniff the cow dung burning in rustic villages, to pat the heads of the doe-eyed children they have kept safe from brand name infectious diseases.

Who is along for the ride on this rollicking adventure?

O, African, behold Chelsea Clinton, future presidential candidate of the Democratic Party, perhaps the woman destined to be the second female leader of the Greatest Nation in the Free World. Ms Clinton’s achievements are many, and like the women and girls the Clinton Foundation is mandated to empower, she has been given a major leg up by the organisation. Alongside her on this trip, you see, is Lynn Forester de Rothschild, the billionaire boss of E.L. Rothschild, who in 2000 honeymooned at the White House, and who has invested significantly in Chelsea’s husband’s hedge fund.

O, African, this is not all. Yes, as reported on the American website POLITICO, Jay and Mindy Jacobs are here! We can have no better friends than these illustrious owners of American summer camps. They have gifted us, via the Foundation, between half a million and a million dollars – but really, who knows how much? Despite a deal Hillary Clinton cut with the Obama administration when she became Secretary of State in 2008, the Clinton Foundation has not been forthright about its finances. In fact, the Foundation has been so recalcitrant to open its books that it shall certainly become a campaign issue for the elder Ms Clinton when she endeavours to purchase the White House next year.

The Republicans will ask who gives Bill, Hillary, Chelsea, and us Africans so much money? And for what purpose?

O, but Africans, there is more. No one less than Hadeel Ibrahim is here! The daughter of Sudanese-British billionaire mobile phone philanthropist Mo, Hadeel Ibrahim is a great friend of Chelsea’s, and they apparently spent a wonderful thanksgiving together at the Clinton pile in Chappaqua. All has been forgiven since Bill Clinton Cruise Missiled the Al-Shifa pharmaceutical factory in 1998, subsequently denying tens of thousands of Sudanese necessary drugs, and possibly killing them in an unfortunate and unavoidable case of collateral collateral damage. The missiles were in retaliation for terrorist attacks on US embassies elsewhere in Africa, and the bombings remain one of the more – how shall we say? – baffling uses of American fire power since that country’s independence.

But where was I? Ah, Hadeel Ibrahim, who runs the Africa Centre in New York City – “ part cultural outpost, part public policy institute and part international business forum”, according to the New York Times. If she has let bygones be bygones, so too shall we. The stylish 31-year-old has appointed former ambassador to Botswana and “Africa expert” Michelle Gavin as managing director, and she and Ms Ibrahim will have much to discuss after the illuminating and gratifying Clinton Foundation tour. Their $100 million Manhattan premises will be marvelously enriched by these new experiences. Oh, I almost forgot to say: Chelsea Clinton is co-chairwoman of the board.

Do you see how it all works? And they say Africa offers no opportunities for upward mobility. Pah!

But I am not done. Along for the ride are many other Clinton Foundation donors, Bill and Hillary funders, professional philanthropists, Silicon Valley whizz-kids (were I to DropBox this article, I’d make Africa richer!) and generally outstanding humans. The four-nation, nine-day safari – which will include stops in Kenya, Tanzania, Liberia and Morocco – will culminate in a dazzling conference in Marrakesh, presided over by that famous empower of women and long-time Foundation supporter, the King of Morocco. According to POLITICO, the spread will be “funded by donors including a Moroccan-government-owned phosphate company, which […] donated $1 million”.

Now, I know what you’re thinking. That $1 million would certainly go a long way in Liberia. But it is not for us to tell these brilliant minds how and where to spend the money they have raised in our name. After all, have you been President of the United States, or a cellphone billionaire? We would be fools not to understand that it takes money to make money, and the tour and conference will certainly lead to more donations, and therefore a much better Africa!

And it is equally churlish to think of the Clinton Foundation as a giant corrupt money suck akin to the worst African banana republics. Simply because the Foundation, as I may accidentally have mentioned, has problems disclosing its donor list, and simply because Bill Clinton seems to have helped a Canadian mining magnate hand over 20% of America’s uranium resources to the Russians while Hillary was leading the state department, does not ipso facto make the outfit rotten. And what does it matter to you, O African, that tens of millions of dollars have flowed into Clinton pockets from women’s empowerment centres like the UAE and Saudi Arabia, either for speaking fees or for donations?

It matters not at all. What matters is the fine work the Foundation has executed on the continent. And they have done some fine work. One must be very careful here not to incite the writing of angry letters by NGO managing directors, and so I’ll say again: Bravo for Beneficence Inc.

That said, it may be tempt some among you to imagine that the Clintons and their Foundationites are using the continent as a theatre set, and we Africans as drooling extras, in a play in which we are meant to get fancy diseases for pennies while they play the hero for dollars. It is tempting to say that this is all about big money and real politick, because Bill and Hillary Clinton, along with their Chelsea clone, serve power for power’s sake. You might wish to say that this all seems so garish and ghastly, millions of dollars blown by a 0.1% cabal on swanning about the continent, billions of the world’s wealth zipping over the African savannah in a legions of Lear Jets.

But you would just be sour to think that way. Ungrateful. When the beautiful waxed SUVs zip into your village and you smell the $1,500 anti-aging cream on the frozen faces of these Kings, these Gods, remember to thank them with the appropriate deference. Remember to bow and scrape.

If we don’t look the part, then they don’t get the money. And the whole system will come crashing down. DM