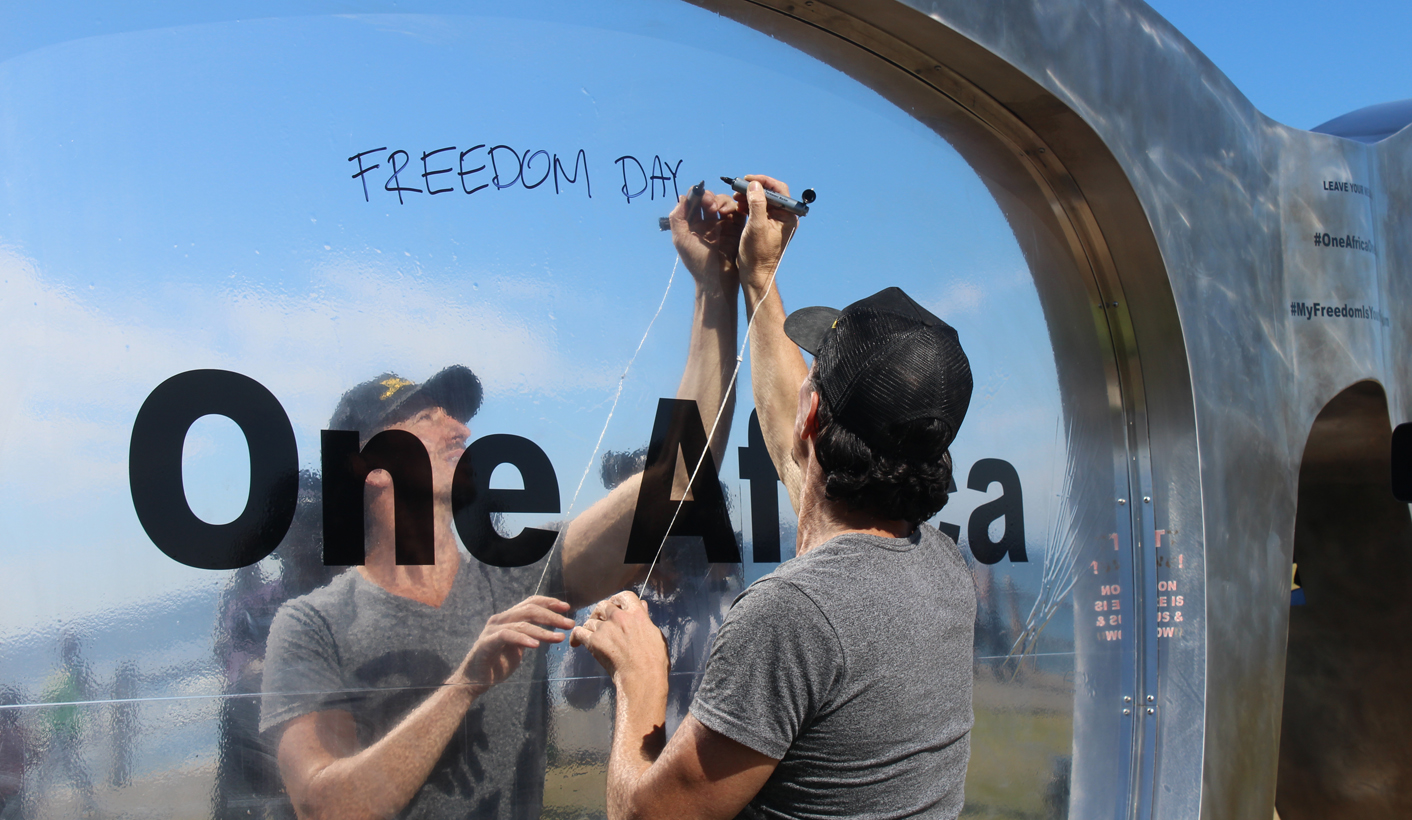 Months before Rhodes fell, there was an outpouring of outrage about another Cape Town sculpture – albeit a substantially younger one. ‘Perceiving Freedom’, a giant pair of sunglasses erected on the Sea Point promenade as a tribute to Nelson Mandela, was vandalised within days and denounced as shallow and opportunistic. On Freedom Day, artist Michael Elion gave the Ray-Bans a makeover. This time around, they’re about xenophobia. By REBECCA DAVIS.

Once bitten, not shy. Artist Michael Elion is either a very hardy soul or a sucker for punishment. After being on the receiving end of a tsunami of scorn last year for his ‘Perceiving Freedom’, Elion is back with a new iteration of the controversial sculpture.

The giant sunglasses, partially financed by Ray Ban, look out over the sea to Robben Island. They were originally accompanied by a plaque explaining that the work was a “sculptural tribute” to Nelson Mandela, with a picture of Mandela – while still a prisoner – wearing a pair of sunglasses.

What the plaque failed to mention, as observers subsequently pointed out, was that the picture of Mandela was taken under duress. Wrote Tom Eaton: “But the photographers kept coming, and so Prisoner 46664 stood his ground, making a point of not doing the work he was supposed to be doing, his rage and disdain barely hidden behind the dark glasses. The resulting photograph does not show Madiba the reconciler contemplating forgiveness. It shows a proud, intelligent man trapped, exploited and angry.”

Amidst subsequent cries that the work was, if anything, actively insulting to Mandela’s legacy, the plaque was removed. It didn’t take long for the glasses’ lenses to be removed either, after local artists’ collective Tokolos Stencils spraypainted “Remember Marikana” onto them, together with the words “Myopic Art”.

Without the lenses and with no contextual information, the glasses have simply become an object on the Promenade. Kids clamber up the side, and tourists take selfies in front of them. Many would say that’s the most positive possible outcome for them.

Photo: Elion’s team works to install the new lenses, with their text reading One Africa/ One Love (Rebecca Davis)

Yet Elion has apparently not yet relinquished the idea that his glasses need to make some kind of statement. On Monday, Elion and a small team spent the morning on the Promenade re-installing lenses with a vinyl covering. On the sea-facing side of the lenses, the words “One Africa/ One Love” are printed. On the back: “My Freedom Is/ Your Freedom”. Pens have been tied to the sunglasses to allow members of the public to add their thoughts on the lenses.

“I just wanted to add another good story into the narrative of this country,” Elion said, after completing the installation of the lenses. “What this is, it’s a gesture. I’m an artist and I want to make my contribution…The idea is to create a sense of unity, a sense of social cohesion, get everyone involved, let them contribute a positive narrative.”

Asked if he was worried that the artwork would get the same kind of frosty reception as the last time around, Elion replied: “Well, this time I’m inviting people to deface it. I would imagine that with the positive message, ‘One Africa One Love’, inevitably people will contribute positive messages.”

Elion said that when the surface of the lenses was entirely covered with messages, he would remove the lenses and create an artwork to be auctioned to support the victims of xenophobic violence. Elion was the first person to pen his message on to the lenses: “Emmanuel Sitole [sic] rest in peace my brother,” he wrote.

“Can I just say something?” an onlooker interrupted Elion. “More zen, less phobia.”

Curious passers-by stopped to watch. Perhaps unaware of the sunglasses’ dark past, they were almost unanimously approving. “It’s awesome, hey,” one said. “To see such positivity.”

Rodin Mulumba, taking a morning stroll, voiced a similar sentiment. “I think it’s very brilliant that the guy [Elion] didn’t put anything about xenophobia, only love,” he said.

“It’s really nice,” a young girl voiced shyly. “It really shows that we’re all together, one family.”

Elion said that the installation of the revamped lenses cost him about R10,000, a cost he bore by himself. He admitted that he did not ask the City of Cape Town or any other relevant authority for permission to make these changes to the work.

“I should’ve, but there wasn’t time,” he said. “I will in future. It would be really great if this could become a site for future political awareness campaigns…But for me, I had to do it. We didn’t have a lot of time. The permission process would have taken too long.”

Photo: The back lenses of the glasses now bear the words My Freedom/Your Freedom (Rebecca Davis)

At the height of the backlash against the original sculpture last November, Elion laid criminal charges against a number of people he accused of intimidation on social media, and in a radio interview compared the controversy to the Rwandan genocide. At the time, Elion told City Press: “When I walk around and shake people’s hands my head plays tricks on me, I ask: are people talking about me?”

When the Daily Maverick returned to the sculpture around five hours after Elion had left it, the lenses were almost completely covered in writings from the public already. But messages about xenophobia – or Freedom Day – were in a distinct minority. Instead, most people had simply scrawled their name on the glasses.

“Fuck,” someone else had written very small below that.

“Big Bay Surf Lifesaving Club is awesome,” another had contributed.

Elion had stressed that he was open to people writing whatever they liked on his glasses, but he has his work cut out to turn those comments into a poignant charity artwork. DM