How xenophobia got South Africa working 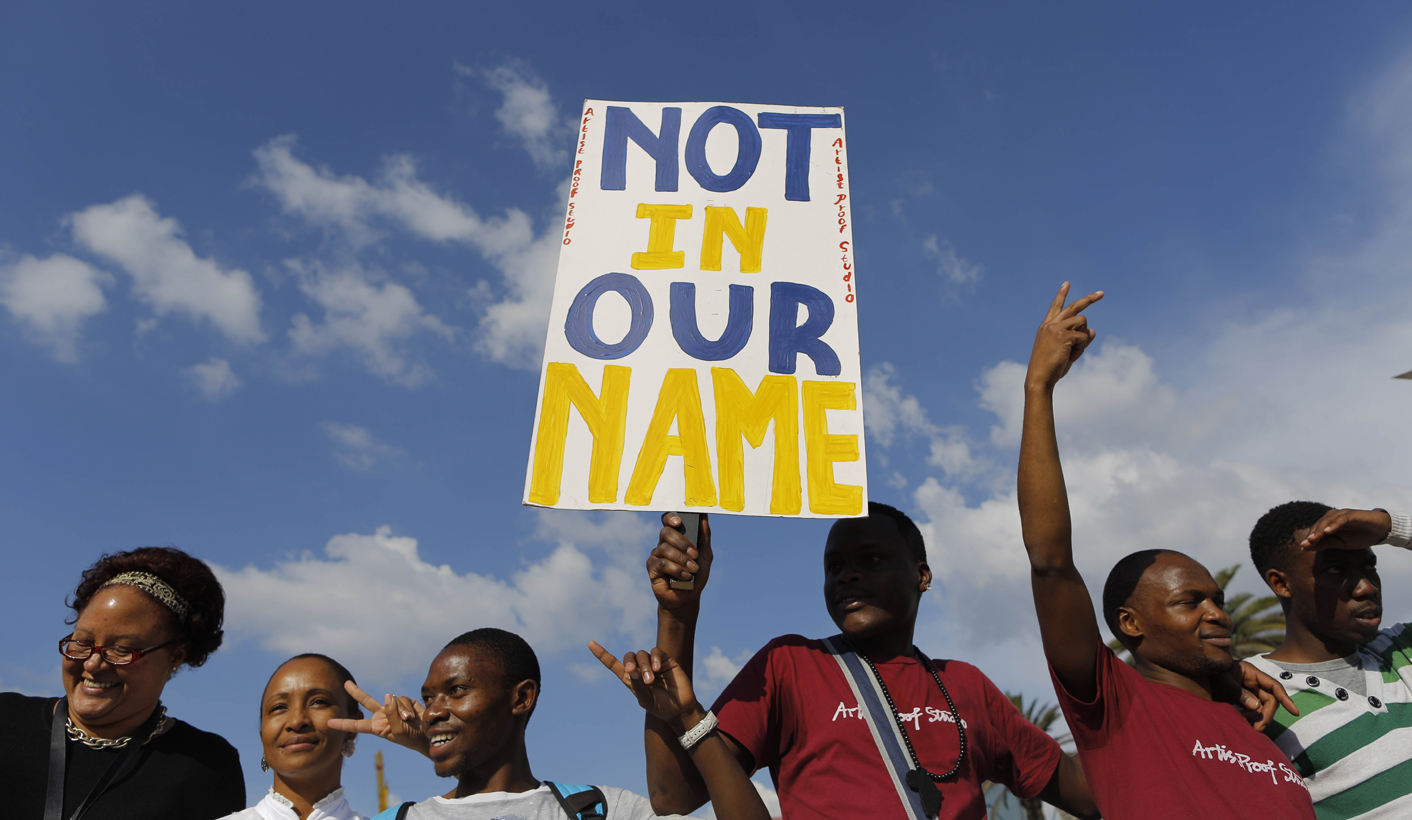 Blockade a road or burn down a building and those in authority will pay attention to your grievances. Throw faeces and a colonial statue gets removed. Assault and kill foreign nationals and government, political leaders and civil society start working like we have never seen them doing. This is by no means a silver lining to the xenophobic attacks. It is an indication of what it takes to get heard and for action to be taken in South Africa. What will happen when the violence abates? Does everyone go back to resting on their laurels? The more terrifying question to contemplate is what will it take next to draw attention to a nation in crisis? By RANJENI MUNUSAMY.

Two months ago, President Jacob Zuma presented his State of the Nation Address with most of the opposition benches in Parliament empty after the Economic Freedom Fighters (EFF) was forcibly removed and the Democratic Alliance (DA) staged a walkout. This week, Zuma, Julius Malema and Mmusi Maimane are all singing from the same hymn sheet, along with the rest of the country’s leaders, to bring an end to the xenophobic violence.

Who would’ve thought it?

But it is not only political party leaders actively participating in efforts to spread the anti-xenophobia message. The entire government system, from national, provincial and local government level, business, sports bodies, labour, religious leaders and civil society organisations have all mobilised to participate in efforts to deal with the root causes of the violence and promote relations with foreign nationals. It is a big departure from the wheels slowly turning in government and the rest of society whinging about its failures.

From mass marches to candlelight vigils to ministers raising money from business to give to aid organisations, the activism and goodwill of the last week has been impressive. The march through Johannesburg on Thursday brought everyone from the mother of the nation, Winnie Madikizela-Mandela, currently organisation-less Zwelinzima Vavi, leaders across the political spectrum from the ANC to the United Front, social activists and religious leaders to preach the anti-xenophobia message.

Were it not for the deaths, people fleeing the country and police and soldiers raiding hostels like it is the 1985 State of Emergency, it would all be Lead SA’s wet dream.

Zuma called together about 40 organisations on Wednesday to discuss migration and what could be done to promote relations with foreign nationals. At a media briefing afterwards, representatives of the organisations took turns pledging to do their bit to support government’s initiatives to prevent further attacks on foreign nationals.

“These attacks are not a small matter, nor it is a matter for government alone but for all of us as South Africans. We don’t need another occurrence of these attacks in our country,” Zuma said. While the president normally passes off questions to his ministers – or occasionally defers them altogether – on this issue, he was clearly well briefed and completely hands on. He was even able to give figures of the number of Zimbabweans in South African jails, which he said fuelled perceptions that many foreigners were involved in crime.

“If we don’t deal with the underlying issues, it (xenophobic attacks) will come back… We have taken a decision that we don’t want to see it again and therefore we are going to be working together with that determination,” Zuma said.

The business representatives undertook to look into payment disparities between South African and immigrant workers, which causes resentment and perceptions that foreign nationals are taking local jobs because they are prepared to work for less money.

While government undertook to improve measures to regulate migration, it was proposed that the state monitor the movement of goods into the country that land up in spaza shops. There was also a proposal for a major campaign called “Bill of Responsibilities”, intended to educate young people about what it means to be South African.

A committee compromising representatives of the stakeholder groups will now work with the inter-ministerial committee to take these proposals further. Had the attacks not happened, these issues would probably not have been dealt with anytime soon.

While the attacks caused the displacement of thousands of people and earned shame for South Africa on the continent and across the world, it also got the business as usual pattern altered. Parliament has postponed its programme for next week so MPs can go to their constituencies and participate actively in campaigns against xenophobia. A multiparty committee with representatives from the National Assembly and the National Council of Provinces will visit hotspots to investigate the cause of the violence in those areas.

The office of the ANC chief whip Stone Sizani said Parliament could not continue with “business as usual when the nation is confronted with a situation which threatens to tarnish our image as a peaceful and welcoming country”.

At provincial level, the premiers are leading initiatives to promote the anti-xenophobia campaign. At the march in Johannesburg, Premier David Makhura said the country would defeat xenophobia like it did with apartheid. He also said there would be concentrated focus on bringing development to areas like Alexandra, which was a violence hotspot during the 2008 xenophobic attacks and again now.

Alexandra township was also the scene of the killing of Mozambican Emmanuel Sithole on Saturday. Pictures of Sithole’s stabbing stunned the country and revealed the brutality of the attacks on foreigners.

On Thursday night, Vavi tweeted: “The marches of today are a beginning not an end – new struggle on underlying causes of desperation/hopeless long overdue” [sic]. Buoyed by the activist spirit in the air, he also said tweeted: “Madiba is smiling today”.

Indeed, it is all very inspiring. But there is also an inherent danger that those who went on a violent rampage will see some benefit result from their actions and to instigate trouble again to provoke a reaction. If fast-paced development is directed at trouble spots, which it should be, it could set a new trend in how to draw government’s attention.

We have seen people resort to desperate measures before because of the inattentiveness of government to their grievances. Burning public facilities and poo throwing all resulted as methods of protests when normal channels of raising objections failed.

Now that we have seen a responsive government in action, expectations will be raised that they stay on the ball. Like with the 2010 Soccer World Cup, government has shown how it can work optimally. It would be disappointing if it returns to business-as-usual mode as soon as the situation stabilises, just like the slump after the World Cup. For their part, business and civil society also needs to stay in the game to deal with other crisis issues.

South Africa has multiple crises to deal with, including deepening inequality and grinding poverty, which resulted in communities exploding and resorting to violence. Those issues can only be dealt with if government and society remains in peak operation mode, like they are now.

The boots-on-the ground approach need not only apply to the South African National Defence Force. We went to the precipice and are pulling ourselves back. We might not be able to do so in future. DM

Photo: Some of the thousands of people are seen carrying anti xenophobia posters during a mass march calling for an end to attacks against foreign nationals, Johannesburg, South Africa, 23 April 2015. Although the attacks of foreigners have stopped, thousands have been displaced and are living in refugees camps in Johannesburg and thousands of people have left South Africa to move back to their countries like Zimbabwe, Mozambique and Zambia. EPA/KIM LUDBROOK