Worth a thousand: Can a picture say too much? 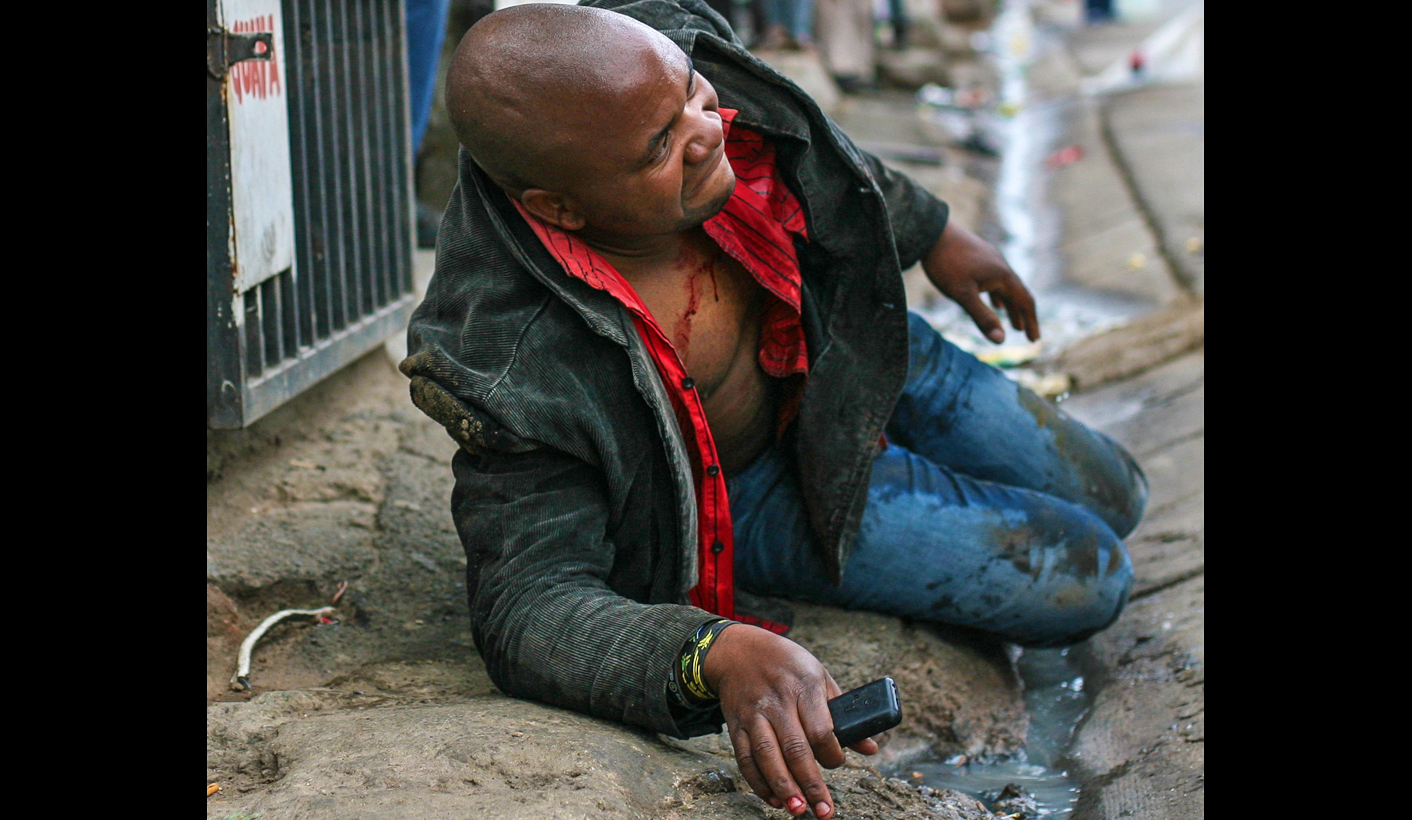 Last week, the Sunday Times caused shockwaves when it published photographer James Oatway’s pictures of an apparently xenophobic murder on the front page. Responses have been mixed, with some hailing Oatway’s work for bringing the reality of xenophobia to light, and others saying the pictures should never have been published. Does a picture sometimes say more than a thousand words – and is this ever too much? By GREG MARINOVICH.

A new wave of xenophobia has swept across KwaZulu Natal and to other parts of South Africa, mostly on the Reef.

Fuzzy mobile phone imagery of dubious origin has competed with professional video and still photographs to tell the story of terror, displacement and hatred. The ugly truth of just how ethnic chauvinism and Afrophobia plays out on the ground has remained vaguely defined.

That all changed, however, when James Oatway photographed the brutal death of Emmanuel Sithole in Alexandra township. This incident made personal and tangible what would have otherwise been filed as yet another fatal statistic on a police report, most likely put down to criminal activity as opposed to xenophobia. The reality of the violence pushed its way into South Africans’ living rooms.

With these images, splashed on the front page of the Sunday Times, came hot debate, as exemplified by Zwelinzima Vavi on Twitter:

What’s your view of pics taken by a journalist of Emmanuel Sithole being stabbed in Alex? Should journalists not take or show such pictures?

Most of the responses on Twitter supported the courageous work of Oatway, as well as the decision to run them. His supporters were seemingly also swayed by the fact that the photographer and his colleagues had taken the fatally wounded man to a hospital.

The running of these images raises the issue of further violating the dignity of the murdered man, and the spectre of violence pornography, of arousing the prurient viewer. Susan Sontag wrote that “painful photographs supply no evidence, none at all, for renouncing war – except to those for whom the notions of valor and of sacrifice have been emptied of meaning and credibility” (‘On Photography’, 1977). Some journalists questioned the wisdom of running the images.

Oatway’s telling of what happened that morning might assist us with deciding whether these images have value to society, beyond selling newspapers and titillating social media.

“That morning was very calm. It was not like there were mobs running around. We were looking at shops that had been looted, assessing the aftermath and speaking to the owners of the shops. I was taking some pictures of the portable toilets that had been pushed over when the attack started.

“I saw the guy with the monkey wrench bring Emmanuel down, and I ran towards them, taking pictures the whole time. It was this weird kind of intermittent attack. The guy with the monkey wrench started and then he ran away again and then this guy with the knife came from behind him and started stabbing him. They grappled a bit and both fell on the floor. Then the guy with the wrench came back in and started hitting Emmanuel. Then they circled around him a bit and they ran off again. At this stage another man came in with this massive butcher’s knife but I am not sure if he landed any blows with that butcher’s knife. The attacker’s friend pulled him away and then they disappeared. The whole thing was very quick.”

The time stamps on Oatway’s images show that the attack took just 28 seconds.

While Oatway did not say anything during this brief and brutal attack, his presence seems to have thwarted the attackers from visiting further violence on Sithole.

“The actual attackers did not seem to be saying much, they were intent on killing him, not just beating him. I am sure that if I was not there they would have done much worse to him.

“There was one guy who was, I think, friends with the attackers, and he had seen me there before the attackers realised I was taking pictures. He shouted at these guys, ‘Hey, whoa!’ that kind of thing. He was trying to stop them because I was there.

“There was an older man in workman’s boots and overalls who who remonstrated with the guy with the monkey wrench and was trying to pull him off Sithole.”

After they left, Sithole sat down and Oatway shouted at him to run away, fearing that the attackers would return to finish him off. “He sat looking at me for a little bit like he didn’t understand me and then he stood up by himself and ran in the opposite direction.”

At this stage, Oatway had no idea about the fatal stab wound to Sithole’s heart; he thought that the man had suffered non-lethal injuries in the attack. He concentrated on speaking to some of the onlookers to try to find out the cause of the attack. One of the people there told him that the victim was Mozambican.

Oatway mentioned to his colleague Beauregard Tromp that they should help the man to the nearby clinic, “but we had not examined him, we did not know the gravity of his wounds. Then a couple of minutes later someone shouted ‘That man has just fallen down!’”

Oatway ran up the road and finally found Sithole about 60 to 80 metres away, lying in the gutter up the road. He called out to Tromp to bring their car around so they could take him for medical assistance.

While waiting, Oatway took a couple of pictures of him. At this stage, he still did not realise that the wounds were fatal.

They initially took Sithole to the local clinic where staff were unable to assist him. The journalists then took him to a nearby hospital, where staff attempted to resuscitate Sithole with no success.

Once back at the newspaper offices, there was an immediate decision to put the images on the front page. Oatway went home to wash off the dead man’s blood. For him, the decision by the paper to use the photographs prominently was the right one. “We want to show people the reality and then people must make up their own minds and have debates, discussions and thrash out the issues surrounding the pictures, but there it is. I think it is important that people see that kind of stuff even though it’s not easy to look at. I can understand why some people are offended – it is pretty grim; but people have to know that this is the brutal, cowardly nature of this xenophobic violence.”

There is no doubt that pictures like Oatway’s, properly contextualised, are a valuable document, proof of human rights violations, of murder. They are not pretty, no matter how aesthetically imbued is the photographer’s craft. These image make us want to avert our gaze yet simultaneously look closer. There is a prurient side to violence that should not take away from the vital need to show what human beings do to each other.

Just as it is the journalist’s duty to unflinchingly document, so is it the duty of a socially responsible publication to print them in context. DM

Photo: Emanuel Sithole lies in the street after he was stabbed by a mob in Alexandra Township, Johannesburg, South Africa, 18 April 2015. EPA/KEVIN SUTHERLAND