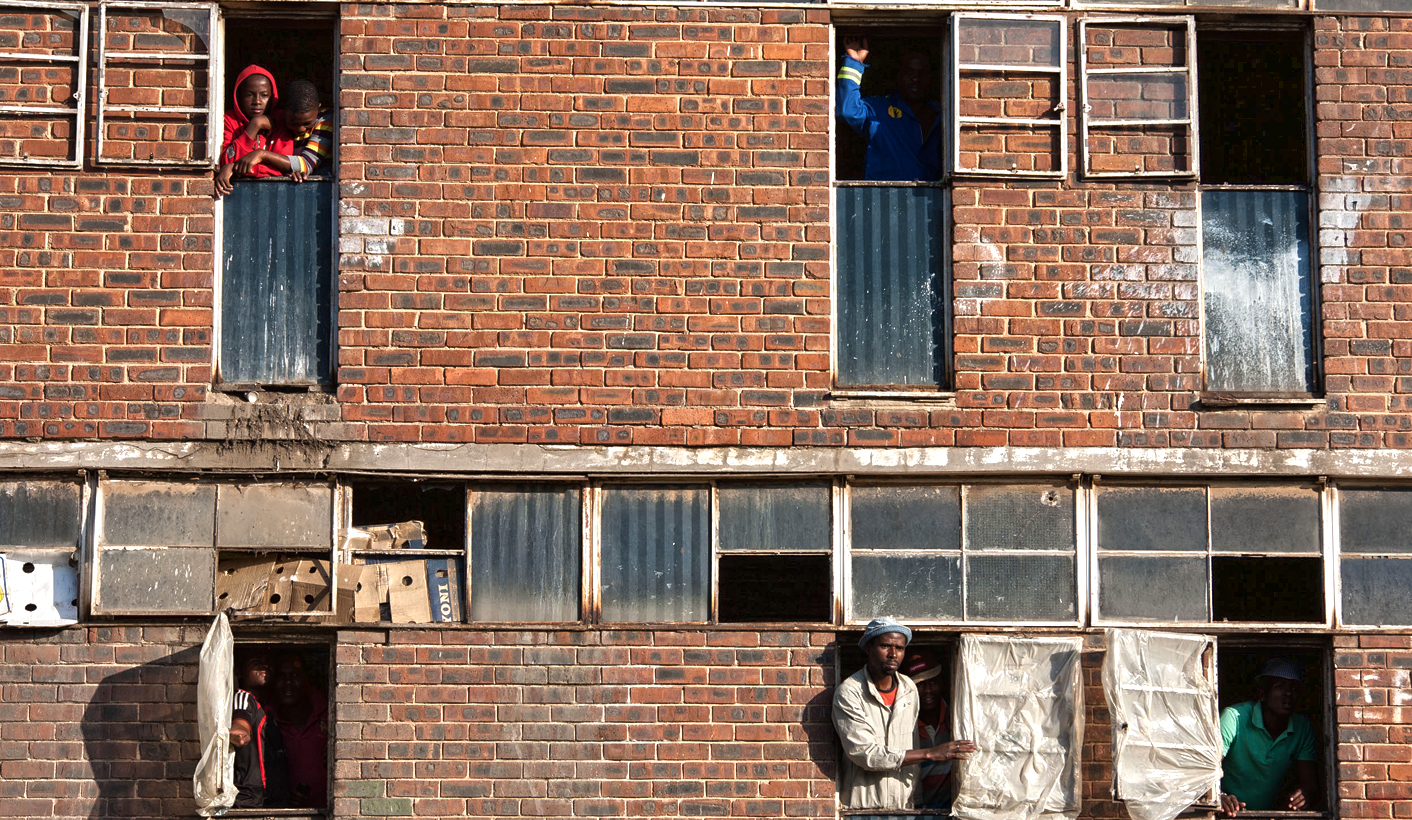 Remember the hostel system from the bad old days? It hasn’t gone anywhere. After the Jeppestown Hostel raid spectacle, RICHARD POPLAK visited the Alexandra Hostel. It’s scary—but not in the way you might think.

Dawn in Alexandra, with the great brick monolith of the Madala Hostel wreathed in smoke, and a question presents itself:

What is a “hostel dweller”?

It’s a question that has somehow become central to the whole re-upped Xenophobia outbreak currently destroying the last shreds of South Africa’s (self) respectability, one that is intimately linked to where the perpetrators live, and why they do the terrible things they do. Much of the media’s attention, and almost all of the policing resources, are focused on a few crumbling hangovers of the Apartheid labour system.

Hostels are bad places full of bad people. We must do something about them.

Township hostels served during the last of the Apartheid years as game reserves for the exotic violence that marked the demise of the regime, and their reputation hasn’t changed much over time. They were, the regime told us, portals for an inscrutable African brutality that validated Apartheid’s raison d’etre: without segregation, the “black on black” violence would spill over into white suburbs and consume all that was holy about the republic. The hostel dweller was a boogieman, a shadow. Either Zulu or Xhosa, he—always he—was an agent of death, a tribal representative of the unreason that lay in wait the moment Apartheid unraveled.

But Alexandra’s Madala Hostel was a battery that fuelled the regime, its cells the men who came in from rural areas to find work in the city. Like all hostels, it was modelled on ethnically-divided bare brick garrets that appended every mine across Southern Africa. They were run by indunas—the overseers, the black baases who did the white baases’ bidding. When the regime was fighting for its life, the hostels were instantly transformed into garrisons in which an ancient divide-and-conquer tactic played out in real-time. It was simple: arm the Zulus, and Xhosas were slain. When the Xhosas armed up in turn, Pulitzer Prize photographs were taken.

The violence of the late eighties and early nineties was so extreme that it placed the hostel at the centre of the South African psyche. Every time a wave of violence breaks—sustained attacks on foreign nationals; sustained protests against perceived election trickery—the attention is once again focused on hostels. This is in part because they remain battlegrounds, places of enormous discontent where history appears far more relevant than the present. Even the violence has calcified into a dull ritual, performances that can be predicted almost to the minute, photogenic mayhem that mimics to the last toyi-toyi all that so entertained the world during Apartheid’s death grunts.

It was a haul fit for a photo-op.

Certainly, there are residents of the Jeppestown hostel who should not be considered model citizens. Over the weekend, I met several young men filled with such hatred for their fellow Africans that were their words to translate into deeds we’d have a holocaust on our hands. But the sad truth is that their hatred is available in all walks of South African society—King Goodwill Zwelithini wears a wristwatch the size of a brick, and there he was two weeks ago urging foreigners to make for the comforts of their homelands.

And the road to the hostels are paved with good intentions. On Monday night, I found myself in the midst of an Economic Freedom Fighters anti-xenophobia rally. During the warm up, before the Commander-in-Chief arrived to say some nice words, the Fighters assembled in a cluster before the Madala Hostel in order to chant slogans. On cue, some fool shot off six rounds from a third floor window, hitting one amongst us in the crowd.

It was a rare blunder from the EFF: the march reinforced the hostel dwellers as the other, and the other reinforced his otherness by going Rambo on a gaggle of unarmed placard-wavers. “Where are the cops?” asked Serialong Malete, who sported a giant Afro, a camo waistcoat and an EFF scowl. “Those are Zulu guys in there, shooting us.”

This incident proves that, like almost everyone in the country, Malema and his people don’t get the hostels, don’t understand their demographic make-up, and will happily use them as props in a get-out-the-votes gambit. By being anti-chauvinistic, the EFF ended up entrenching an age-old chauvinism.

It was so South African I almost applauded.

But on an average Wednesday morning, with dawn having dawned and the township in a flurry, Madala Hostel is just another place where people live. Poor people, certainly, or rather a cohort the African Development Bank would describe as lower middle class. There are poorer than them in Alex, and much more destitute, many of whom live in the shacks that ring the hostel. Oh, and I should mention, Mr and Mrs Gauteng taxpayer, that you happen to own the joint. (The facility belongs to the City of Johannesburg.)

I was in Madala because if this was the warp core in our xenophobic engine room, I wanted to see how it worked. And yet it was no such thing.

Madala was built like a fortress, and it has an architectural logic that can only have belonged to an insane regime. On looks alone it should have been ripped to pieces when democracy dawned. But that, we’re told, would have precipitated a housing crisis. And while Madala clearly does contain a contingent of armed and angry men, most of whom inhabit the upper floors of the northern wing, for the most part it is a multi-ethnic South African enclave that houses families, couples and singletons from across the country. It is peri-urban—in the inner courtyard goats browse, and chickens peck away at the garbage. A vibrant commerce takes place in its hallways, with spaza shops blasting hip-hop, and barbers buzzing away at hairdos.

If it feels uncomfortably Third World, that’s because the world is Third World—this is a version of how hundreds of millions of humans live, if they’re lucky.

Nonetheless, Madala Hostel remains a Heart of Darkness, a blank spot unvisited by anyone who counts, a place to be targeted when the country goes mad. As always, instead of looking inward we look outward, and the big brick buildings have more than enough for our bad juju.

To rid this country of its hatred for the other, the cops and the army would need to raid every shack, tenement, middle class Tuscan townhome, mansion, palace and private island from Richard’s Bay to Beitbridge. Instead, we send the cops into a metaphor, a historical hangover. I’m not saying a show of force isn’t necessary; I’m not saying that these hostels shouldn’t be policed, I’m not saying very bad dudes don’t live there.

But what city maintains for its people exact, 1:1 scale models of the Apartheid labour gulag nightmare? And then raids them for show? It’s a game, a dance. Perhaps it’s time to fill in the blank spots in our city, and understand who we truly are. DM

Photo: Residents of the Alexandra men’s hostel look at the EFF march against xenophobia, Monday 20 April 2105. Minutes later, shots were fired from a window of the hostel into the EFF crowd, injuring one person. (Greg Nicolson)