Xenophobia and the media: Where truth and patriotism intersect 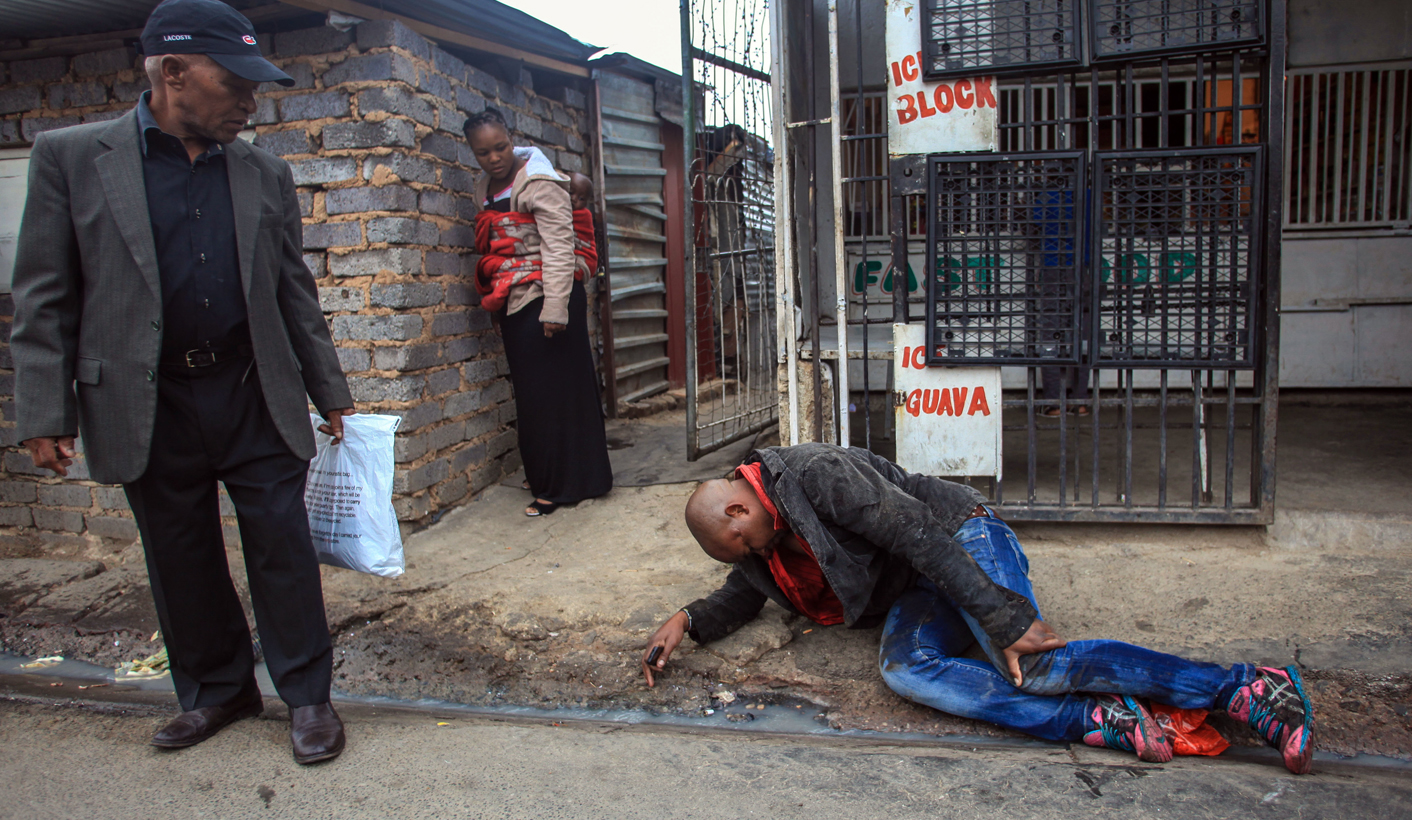 There he was, the president of South Africa, reading the Sunday newspapers and thinking: “This makes us look bad”. The cause of President Jacob Zuma’s consternation was a picture on the front page of the Sunday Times of a man holding a knife menacingly over Mozambican Emmanuel Sithole, who later died of the stab wounds. On Tuesday, Defence Minister Nosiviwe Mapisa-Nqakula announced that the army had been deployed to hotspots affected by attacks on foreign nationals. She too lectured the media about “responsible reporting”. In a twilight zone of “patriotic journalism” that Zuma and members of his Cabinet envisage, would South Africa “look good” even as soldiers patrol the streets to prevent violence? By RANJENI MUNUSAMY.

There is definitely a conversation to be had about James Oatway’s shocking pictures of Emmanuel Sithole’s attack. That conversation would include whether publishing the images of his agony as he lay bleeding in a gutter perpetuated the indignity of his death and devalued black life. It would examine whether pictures of white people are ever displayed as graphically in the media. There is a debate to be had about whether public interest and exposing the ugly truth about the society we live in justifies such pictures being published.

The discussion should not, however, include any consideration to suppress such material because it makes South Africa “look bad”, which appears to be President Jacob Zuma’s understanding of a patriotic media. Speaking at an anti-xenophobia forum at the ANC headquarters in Johannesburg on Monday, Zuma questioned the publishing of Oatway’s pictures, asking, “What are we telling the world about ourselves?”

He likened the situation to a family with an errant member. He asked whether that family would expose the deviant member as representing them. He said the pictures also conveyed that “all South Africans are carrying knives, are killing one another”. As he has done in the past when speaking about the virtues of a patriotic media, Zuma used the example of Mexico and how the media does not represent their country in a negative light despite the high crime rate.

The president said publishing pictures of “mutilated” bodies could also provoke family members to seek revenge and could therefore “perpetuate” violence. He said after the September 11 attacks, the US media did not show pictures of the dead bodies out of respect for those who perished.

But that was clearly not Zuma’s primary concern. He went on to criticise broadcasters for using “clever people” as analysts, as they also project the country in a negative light. “Clever people”, in context, appear to be opinionated commentators who are less than congratulatory about those in leadership positions and the state of the nation.

It is interesting where Zuma pegs the problem in the context of the current violence. The resurgence of xenophobic attacks points to several things. In a fashion similar to our dealing with the 2008 Eskom crisis, the country has not tackled the root causes of the attacks on foreign nationals since the xenophobic violence that killed 62 people in the same year. Government as the leading force in society has not been able to promote better relations in communities, or respect for foreign nationals, and also failed to address issues that caused resentment.

The hostility against foreign nationals ranges from perceptions that they are responsible for crime and drugs in communities. Poor socio-economic conditions also mean that there is greater competition for resources and jobs. After years of promises about job creation and improving living conditions in impoverished areas, people are venting their frustrations.

Acknowledging all this would mean that the president would have to concede failures in his leadership and his administration. He would clearly rather have the Hlaudi Motsoeneng formula for “patriotic journalism” – reporting 70% good news – than have the full picture exposing his weaknesses and failures on display.

It is generally known that South Africa is an extremely violent society. Our sky-high rates of murder, sexual violence and aggravated robbery all bear testament to this. In everyday reality, communities, particularly poor ones, are accustomed to violence. Zuma’s claim that having a picture of a man stabbing another man on the front page of national newspaper incorrectly portrays South Africans as being violent is a misnomer. There is no denying that violence is prevalent everywhere in our society.

What the pictures did was give crime, and particularly the xenophobic attacks, human faces – both of the victims and the perpetrators. Through Oatway’s pictures, we got to know Sithole and the difficult life he led to make a living to support his family in Mozambique. We got to see the pain he endured at the hands of South Africans.

The pictures we have seen of those involved in violence and looting have been of mobs running through the streets. Oatway’s pictures froze that terrible spot in time so we could see the attackers’ faces in the moment, what they looked like as they beat, kicked and stabbed Sithole. We needed to see the pictures not only so the perpetrators could be identified and face the law, but also to bear witness to the young men who could have been good but which society moulded into evil.

They are part of a generation without hope, without jobs and without positive role models, that we sometimes treat as being invisible. They are not.

In announcing the deployment of the South African National Defence Force to hotspots affected by xenophobic violence, Defence Minister Nosiviwe Mapisa-Nqakula called on the media to be responsible in reporting the attacks. It is not clear how foreign nationals being assaulted, shot at and stabbed, and having their belongings looted, can be reported “responsibly” without telling the truth. The media has also been telling the stories of those seeking refuge in temporary shelters and those fleeing the country.

Any effort to suppress these heart-breaking stories and human trauma would be to collude in a country-wide cover up. Presenting half-truths or trying to play down the attacks would abet the atrocities and shield the perpetrators.

There is in fact no way to portray soldiers patrolling the streets in a “patriotic” or positive way. The very fact that the police are unable to contain the situation and require backup from personnel trained for war zones to stabilise volatile areas tells the story without “clever people” having to dress it up.

Zulu King Goodwill Zwelithini on Monday called for the media’s role in the xenophobic violence to be investigated. At an imbizo in Durban, he claimed the media had quoted his comments about foreign nationals out of context and also said there were “people who want to pit us against each other”. “What I see in newspapers is that people are fed [lies]”, the king said.

At the court appearance of Sithole’s attackers at the Alexandra Magistrates Court on Tuesday, journalists were intimidated by members of the community. Photographers were warned not to take pictures of people who had come to support the accused. It is concerning when journalists are viewed as the enemy and prevented from doing their jobs.

The South African media operates in a relatively free environment and is able to stand up and fight for its freedoms when these are threatened. Still, it is concerning that people in authority wholly misunderstand the role of the media in democratic society and attempt to demonise journalists. The constant effort to encourage toadying under the guise of “patriotic” journalism is even more concerning.

As we have seen in countries where democracy has been compromised or with repressive regimes, a kowtowing media cannot hide their failures and abuses from the rest of the world. All they do, perhaps, is temporarily hide the truth from some of their own citizens.

South Africa will hopefully continue to reject any attempt to suppress information and insist that the truth, no matter how ugly, or disturbing, be told.

History teaches us that, no matter what, the truth will always find the way out. It did on Marikana, it did on Nkandla, it will in many more situations, even when signal jammers and repressive legislation try to conceal it.

South Africa’s troubles are plentiful, and the mission to tackle the fundamental problems is colliding with some people’s greed and ambition. As long there’s a free and intelligent media, there is a chance that these will be exposed and resources will be directed where they should be.

Sunshine media will never be able to play that crucial role; PR can go only so far.

The only reason those in power would want the truth concealed is because it would be an indictment on their leadership. It is not the country that “looks bad”, it is they who fail us. In so many ways. DM

Photo: Emmanuel Sithole lies in the street after he was stabbed by a mob in Alexandra Township, Johannesburg, South Africa, 18 April 2015. Sithole was taken to hospital for treatment but reportedly later died of his injuries. EPA/KEVIN SUTHERLAND