Gunshots and Gogos: The EFF rallies against xenophobia in Alexandra 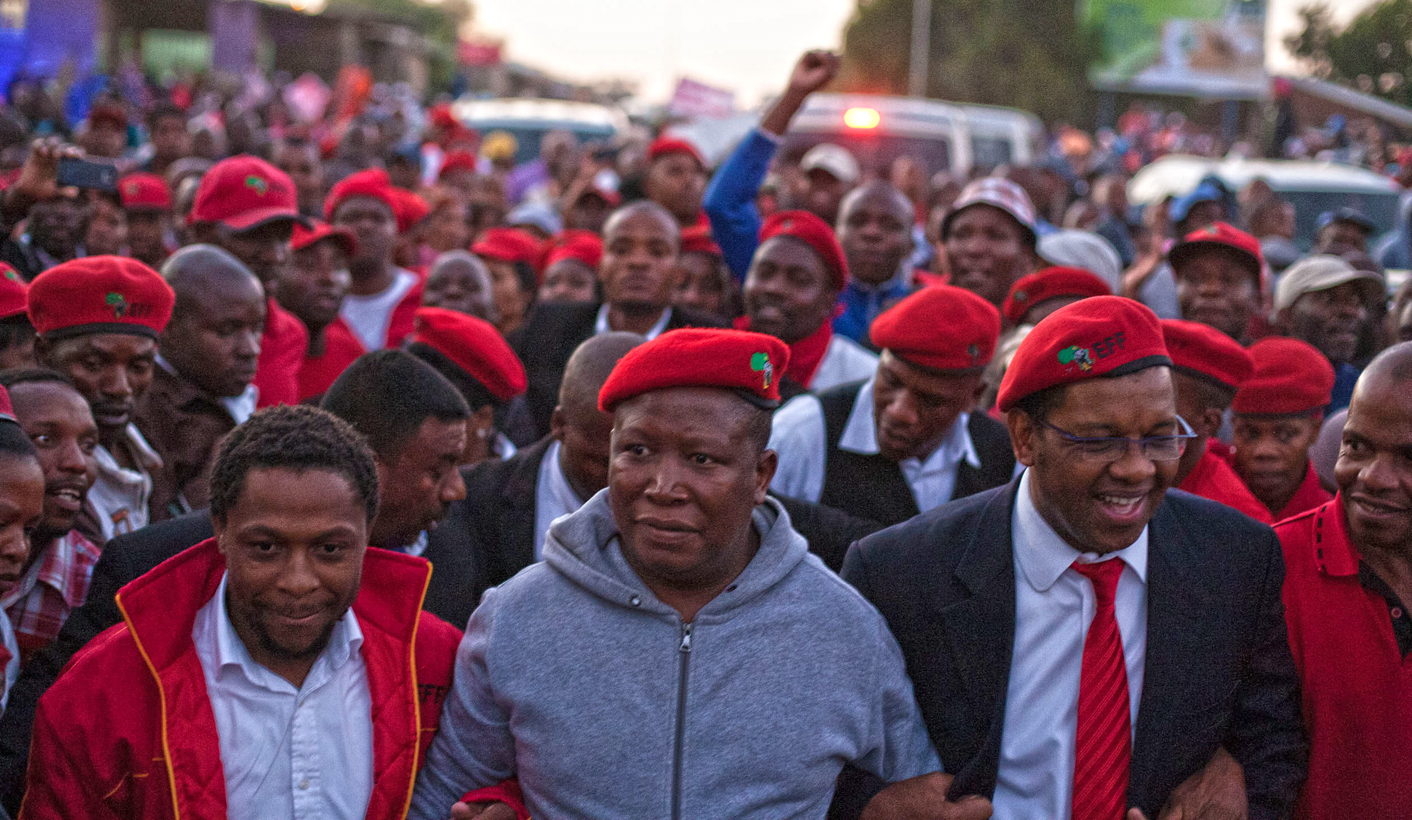 On Tuesday Julius Malema’s Economic Freedom Fighters visited the Johannesburg township of Alexandra for an anti-xenophobia rally. Slogans were yelled. Shots rang out. Where is this all getting us? By RICHARD POPLAK.

It is now day whatever of the re-upped South African xenophobia phantasmagoria, the day after the publication of James Oatway’s photographs of the slaying of a Mozambican national named Emmanuel Sithole, the day during which everyone’s favourite colonial construct—the R63-million-a-year “traditional leader” hood ornament that is King Goodwill Zwelithini—blamed both a third force and the media for misquoting the anti-foreigner rant that kick-started this whole nightmare. Across this nation, anti-xenophobia rallies competed with pro-xenophobia utterances in a cycle that shows no signs of winding down. On the one hand, a South Africa that is deeply horrified by its own unfathomable hatred. On the other hand, a South Africa that remains determined to purge itself of anyone who isn’t from here—whatever “here” means on a continent rendered incomprehensible by pretend borders drafted in nineteenth-century Germany.

On Monday the King spoke at an imbizo at Durban’s Moses Mabhida stadium, while prominent ANC hacks looked on and nodded sagely. “If indeed I have called you to arms this country will be in ashes as we speak,” said the King. “But I’m saying let’s arm for peace‚ now I’m instigating you to mobilise for peace.” No prominent political figure has had the balls to heel Zwelithini, mostly because he comes bearing votes, and to denounce him would be suicide at the polls. That may be. But it renders the world out there a strange one, full of half-steps and juddering attempts to denounce chauvinism while ensuring that one of the more obvious hangovers of colonial Divide et impera gets to speak to stadiums populated by bussed-in extras—most of whom made it abundantly clear that they agreed with the King’s “misquoted” sentiments, and not with his attempts to render them anodyne.

Meanwhile, in the townships of Johannesburg, where complicated communities of actual human beings—Africans from all over Africa, who live amongst each other, teach each other, serve each other, feed each other, love each other, rob each other, help each other—were used as props in a narrative that has become increasingly surreal. Alexandra, the famed township in which so much struggle Sturm und Drang was set, remains a theatre for this sort of thing. Its crumbling brick hostel, which garrisoned Zulus during the Apartheid years, has seen better days—and its best days were bad days. During last year’s election, it disgorged hundreds of men who claimed that the Independent Election Commission had fudged the counting of a ballot box in favour of the ANC. They rioted in the streets, and in came Nyalas, choppers, patrol cars, bulletproof trucks of no known provenance, police, the army, a phalanx of men and women armed to the teeth and ready to kill in order to save the illusory dignity of our illusory democracy.

On Tuesday afternoon, however, Alexandra was just Alexandra, a stage for an Economic Freedom Fighters anti-xenophobia rally that would be addressed by Commander in Chief Julius Malema himself. Unlike President Zuma, Malema appears genuinely upset by the bulk murder of black Africans on local soil. The plan, as I understood it, was to stage the rally and speech at the Alexandra women’s hostel, a dismal living memory of the Apartheid years that should’ve been razed to the ground in 1994.

Nonetheless, there it stood, and there we stood at roughly 16h00, waiting for the CiC and his entourage to show up and address the gathering crowd. That plan, it turned out, was not the plan, or at least not in full. After the rangy Arafat Sello, head of communications for Johannesburg, yelled out the now depressingly familiar slogans—“Down with xenophobia, down”, “Forward United States of Africa, forward”—it became clear that we were to march to the men’s hostel at the end of the drag.

That seemed unwise for several reasons, the most urgent being that some really bad dudes live in the joint, and they’d likely consider this an act of war.

“Where are they going?” asked an older gentleman who gave his name as Samuel. After I described our itinerary, he shook his head. “Write this down in your book: it’s not a good idea to walk to the hostel,” he said. “They’re going to be violent, these guys. They make it look like a Zulu thing, but it’s just a few guys. They”—by which he meant the EFF—“think they are fixing. They’re not.”

“Tell them to write a letter,” added a second man. “Not like this.”

Photo: Residents of the Alexandra men’s hostel look at the EFF march against xenophobia. Minutes later, shots were fired from a window of the hostel into the EFF crowd, injuring one person. (Greg Nicolson)

Unheeding, the EFF rally chanted across the road from the hostel, othering all of those inside. As I stood dutifully scribbling Samuel’s words into my notebook, I heard the pop of gunfire. I looked up and saw muzzle flashes from one of the high windows, and heard four more shots. Screaming. Mayhem. Angry sloganeering. The crowd reared back, and I soon learned that a Fighter had been hit in the leg. Fellow Fighters formed a protective circle around him, shielding him from the media. He seemed rather nonchalant about the whole thing, despite the gaping hole in his khaki slacks.

Photo: The man injured when shots were fired from the hostel is taken for care. He was shot in the leg. (Greg Nicolson)

The Cops, you ask? Clearly you haven’t been paying attention these past few weeks. A compromised ballot box brought out an armed force that could take down ISIS. A thug shooting indiscriminately into a crowd didn’t summon so much as a patrol car. An ambulance did eventually show up, and it carted the injured man away. Count that as a small victory against the forces of all-consuming Chaos.

Battle-stunned, the Fighters made their way back toward the women’s hostel, until a Silver Mercedes van roared down the street. Out jumped the CiC, along with commissars Dali Mpofu and Mbuyiseni Ndlozi. They stood on the back of bakkie, as dusk descended on the township. The CiC slammed his way through a passionate speech that was half a cry for African unity, and half a campaign stop on the long road to Mahlamba Ndlopfu.

Wearing a grey hoodie, faded blue jeans and a red beret, Malema got right to it. “When you arrived here [in Alex], you arrived in a township that was established by force, in order for the people to be closer to work. But you kill a fellow African because African life is cheap!”

He reminded the crowd of the non-existent line between xenophobia and criminality, and implored them to take back the streets. “These borders are not our borders,” he yelled. “These borders are imposed on us by the colonisers. I have come here to plead with you. There is no Zulu king telling you to kill people. The King has never said that. He is just speaking against criminals.” Following that piece of gentle sophistry, he got down to business. “No Zimbabwean has taken your job. You want a job, go to Luthuli House. Take every Zimbabwean back to Zimbabwe, and you will still be unemployed. You can kill all the people of Zimbabwe, and you will still die in poverty.”

And then the kicker: “Your problem is the ANC.”

The anti-xenophobia rally now devolved—or, rather evolved—into a campaign rally, because in South Africa the election cycle never ends. Showing significant moxy, Malema and his crew walked into the streets of Alex, and we followed him into warrens of zinc that lead us into the homes of two gogos. It was a splendid show: the son of a shack returning to the sounds and smells of his Limpopo childhood, folding himself onto a small seat and speaking with the dazzled owner about the issues of the day.

Photo: An EFF member protests xenophobia after the EFF’s Julius Malema had left the area on Monday. (Greg Nicolson)

After half an hour of this, the CiC got back into his van and tore off. Alexandra after a political event still keeps the buzz, but it eventually dies down, and the bustle of normal life returns. Normal life in Alexandra is normal life in most communities in South Africa—folks just getting by one way or another.

Photo: A young girl holds a sign protesting against xenophobia after the EFF’s Julius Malema had left the area on Monday. (Greg Nicolson)

“We are a peaceful people,” Malema said. But that isn’t true. The hatred is always there; it never goes away, it cannot be rallied into negligibility. It’s a self-hatred that manifests as hatred of the other; it’s mass suicide dressed up as mass murder. That said, it is easily tapped, easily used, and makes for some splendid photo-ops. DM