South Africa: The place of shame, violence and disconnect 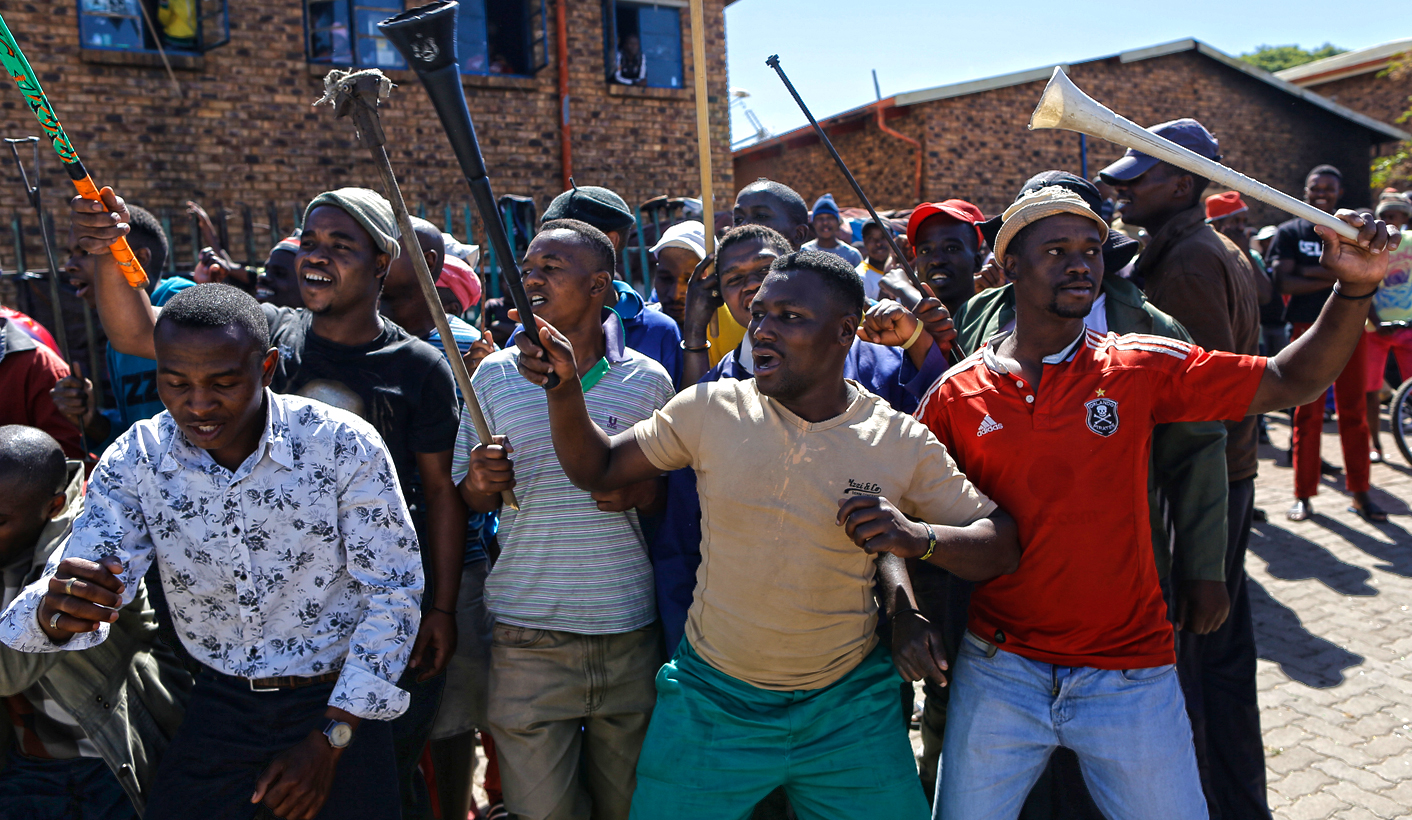 “South Africans are generally not xenophobic”, President Jacob Zuma said in Parliament on Thursday. What are we generally? Complacent? Angry? Fed up? Who knows what the true state of this nation is. However our default position whenever we are under pressure is to resort to violence. It is our thing. Like the French are known for romance and the British are known for being snooty. We are defined by violence – from the roads to our homes to the streets to Parliament and to our bedrooms. We came from violence and we always go back to it. And for as long as violence is our means of engagement, something extraordinary needs to happen to heal our nation. By RANJENI MUNUSAMY.

On Thursday morning, the office of the National Police Commissioner issued a media statement announcing the activation nationally of joint operational centres to “coordinate response to unrest”. Speaking in Parliament later in the day, Home Affairs Minister Malusi Gigaba, referred to “flashpoints” he and other government officials had visited. “Unrest” and “flashpoints” were part of the South African lexicon in the 80s and early 90s. It was the time when a low-intensity civil war was raging, and political violence and bloodshed were part of our daily lives.

And so we are back to what we were, a nation with unrest and flashpoints. A country where mobs sharpen their machetes and vow to kill in front of a wall of riot policemen poised to fire. That was the image of Apartheid South Africa. Now it is the image of post-democracy South Africa.

President Jacob Zuma is credited with being one of the leaders who negotiated the peace deal in KwaZulu-Natal that saw those words and images fade away. He knows what it takes to stop marauding, bloodthirsty mobs from wreaking havoc. And he knows that a heavy police presence is only a temporary solution when people are on a campaign of violence.

Brokering a cessation of violence is one of the things Zuma can do. He knows it takes a multi-pronged approach that involves going to the ground, listening to grievances, disarming those perpetrating violence and mapping a way forward that everyone involved commits to. Zuma wrote the manual on how that is done, and for that reason was dispatched to other parts of Africa to assist in peace processes.

And yet the outbreak and spread of xenophobic violence in different parts of KwaZulu-Natal and Gauteng is being dealt with as if it is a service delivery protest or labour dispute that a heavy police deployment can deal with.

It cannot. This is violence with the intention to kill and destroy lives.

The attacks against foreign nationals have been described as “corrective violence”. Like with “corrective rape”, it is a forceful means to take matters into your own hands and attempt to change what you do not approve of. In the swirl of commentary and analysis to try to understand the xenophobic attacks, it is suggested that “corrective violence” is the means frustrated South Africans are using to rid their areas of crime and drug abuse and chasing away foreigners who take away their jobs and economic opportunities.

After years of unemployment, poverty and crime reaching endemic proportions, with no relief coming from those in authority, people are taking matters into their own hands, driven by anger and desperation. It is this what has caused people to lose their humanity and resort to violence their means of engagement.

How then would heavier policing defuse such a situation? Who should be listening to, understanding the desperation, and providing the long-term solution?

A special debate in Parliament was a good gesture to demonstrate that everyone from the president to leaders of all political parties were concerned by the xenophobic attacks and were willing to address the matter publicly. While there were many, many words of condemnation against the attacks, and a hefty dose of finger pointing as to why they were happening, the parliamentary debate will have no effect in stopping the violence.

It is the symptom of the very disconnect that has brought us to the point where ordinary people believe that nobody is listening and nobody cares. While the debate on the attacks on foreign nationals was in progress in Parliament, a mob of people was trying to attack the peace march in Durban against xenophobia. These were South Africans wanting to attack other South Africans demonstrating their opposition to violence against other Africans.

Had the police not held off the mob, including through firing water canons at them, what would have happened had they reached the City Hall where the march of about 3,000 people ended? Would there have been another parliamentary debate to condemn the chaos and possible loss of life that would have occurred? How would the reign of terror stop?

During the debate, Economic Freedom Fighters leader Julius Malema said the state had taught South Africans that violence was the only way to deal with issues. He cited police killing people at Marikana and in service delivery protests, and his party being forcibly removed from the National Assembly during the State of the Nation Address as examples of this.

Perhaps that may be true, but violence is deeply embedded into the fabric of our society. Violence was used to fight the unjust system of Apartheid and by the former regime to suppress the struggle. The democratic state is mimicking the Apartheid state, again to suppress opposition. And people now use violence against others in the belief they are also fighting a just cause.

Violence is also used as a means to take what does not belong to us, to demonstrate that we have the right of way, the right to violate other people’s bodies and to demand attention.

When we can’t spill blood, we spill shit. When we are done burning tyres, we burn people.

It is all part of the dialect of this tormented nation.

United Democratic Movement leader Bantu Holomisa said greed, corruption and disrespect for the rule of law was rampant in our society, and while poverty was endemic, leaders were interested in lining their pockets. Freedom Front Plus MP Corne Mulder said there was an “evil spirit” running around the country and there were no positive values. African Christian Democratic Party leader Kenneth Meshoe said South Africans need anger management and to pray. Democratic Alliance parliamentary leader Mmusi Maimane said “our humanity is slipping away from us”.

Zuma spoke of new measures to better regulate migration and the deployment of the security cluster and economic departments to deal with the problems.

But who is going to go to the streets and townships to tell those brandishing weapons, assaulting people and looting shops to stop what they are doing? Who will stop the fear and loathing in communities? Who is going to realise the great disconnect between those in leadership and the people on the ground who would not have the benefit of listening to the parliamentary debate?

It came to this precisely because of the disconnect. Leaders across society become separated from the people they serve and therefore get shocked when they go on a rampage. South Africa is the shame of the continent and a deviant of the world, and will continue being so until it changes its culture and values.

Xenophobia, unrest and flashpoints will not go away unless there is a serious national effort to address the multiple collision of problems – the failure of leadership, the economic decline, crime, corruption, abuse and the lack of humanity, decency and values.

South Africa needs to be defined by something new, something better, something that will give us a reason to believe once more. We need hope in time of hopelessness. We need leadership in leaderless years. We need to feel our humanity, we need to feel our goodness. This angry violent nation needs to emerge from the shame of being amongst the wretched of the earth. It might be difficult to see it right now, but we, South Africans, deserve better. DM

Photo: Local South African men dance and sing as they call for foreign shop owners to leave the area after xenophobic violence in the area in Actonville, Johannesburg, South Africa, 16 April 2015. Police searched the mens hostels for weapons used by local South African men against foreign African’s after five people have been killed during recent xenophobia attacks that started in Durban. EPA/KIM LUDBROOK