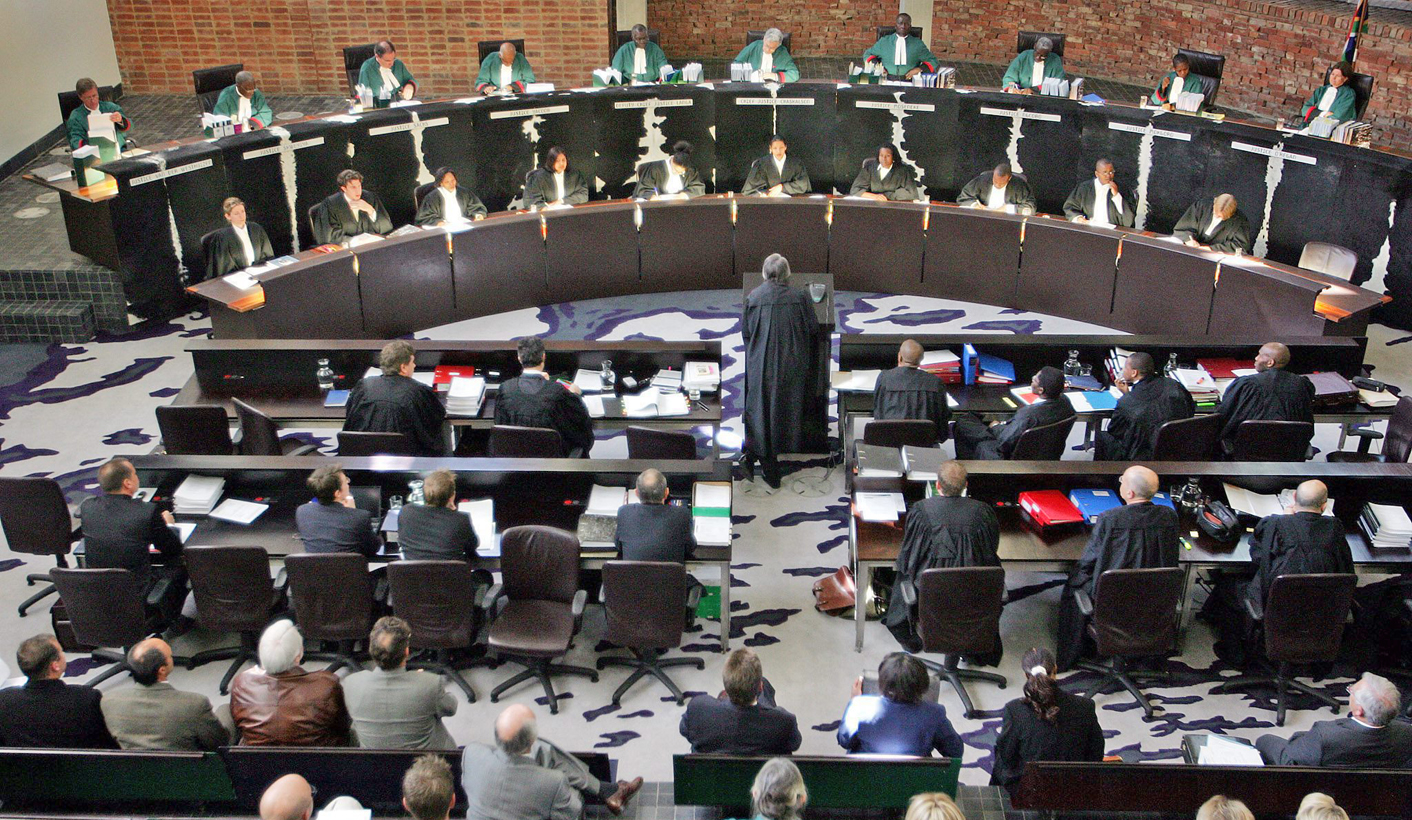 As the Judicial Services Commission begins interviews for judicial positions in Cape Town this week, issues of transformation will once again take centre stage. Of 23 candidates shortlisted for judge and judge president positions, only four are women – one of whom is ‘Oscar judge’ Thokozile Masipa, dubbed “the most famous judge in the country” by the Chief Justice. As ever, the interviews are also casting conditions within South Africa’s criminal justice system into stark relief. By REBECCA DAVIS.

“The issues around gender are terrible around this table, gentlemen,” former North West premier Thandi Modise sighed at one stage during Monday’s JSC interviews.

Her comment came on the back of questions to KwaZulu-Natal judge president candidate Judge Achmat Jappie, about his views on gender ratios within the South African judiciary. JSC commissioner Dumisa Ntsebeza had pointed out that of the current judges on the KZN bench, only 10 out of 29 are women.

Jappie said that there were two vacancies on the bench expected to open later this year, and that “at least one” should be filled with a woman. He claimed, however, that often the most appropriate female candidates “don’t want to make themselves available”.

It was Jappie’s reference to a hypothetical judge as “him” that evoked Modise’s comment, but her frustration likely stemmed from an earlier incident which saw Jappie and Chief Justice Mogoeng Mogoeng share a joking exchange about how Jappie – the only candidate for the KZN judge president position – had managed to “charm” female colleagues into not competing for the role.

Other JSC commissioners didn’t see the funny side, and Jappie subsequently retracted and apologised, saying that the female judges of KZN were “not easily charmed”.

Jappie’s successor in the hot seat, Judge Frans Kgomo, was also grilled on the issue of female representation in the judiciary.

“It is my belief that we have very strong women in this country. And we do not have to lower standards to acquire people from the female species of mankind,” Kgomo responded. Kgomo said that it would not do gender transformation any good to bring women on to the bench who were not ready. He also repeated Jappie’s assertion that women did not want to put themselves forward for these posts.

Mogoeng asked for his views on his only female rival for the post of Limpopo judge president role, Judge Thokozile Masipa – better known as the presiding judge in Oscar Pistorius’ murder trial.

“She’s a very strong woman,” Kgomo said. Apparently in reference to Masipa’s limp, he added: “She may be looking disabled. She’s not disabled in the head.”

Kgomo also raised eyebrows later in his interview when he referred to a litigant in a case he had ruled on as having “procured” another wife. A commissioner subsequently suggested that Kgomo had used gendered language throughout his interview. “I have never had any problems communicating with all of my colleagues,” he replied.

When Masipa herself got her moment, Mogoeng asked her why it was that other women did not make themselves available for the position of judge.

“It’s difficult to say and I wouldn’t like to take a guess,” Masipa replied.

Modise put her on the spot about gender-based violence. “How do we women begin to feel safe in our country, if we are not safe in the beds of the men who tell us they love us?” she asked Masipa.

“It is indeed a big concern,” Masipa replied. But she said that she didn’t feel that the problem could be solved by women judges. She also seemed to suggest that some of the responsibility for male criminality should rest with women: “It may be that women themselves have not brought up male children as they should,” she said.

Later, in response to a question from the ANC’s Thoko Didiza, Masipa said that she could not think of a single occasion on which she had been granted less respect than a male leader would have enjoyed.

Women are in the minority on the JSC as well as in the judiciary more widely. The commissioners tasked with selecting South Africa’s judges include EFF leader Julius Malema, Chief Justice Mogoeng and Justice Minister Michael Masutha. On this occasion, the shortlist of candidates they are interviewing in Cape Town this week is made up of 19 men and four women.

We don’t know exactly how that shortlist gets created – a point which has been criticised before. The University of Cape Town’s Democratic Governance and Rights Unit (DGRU) recently released a report based on its research into the nominated candidates. It contains an appeal to the JSC to make their procedure more transparent: “It is a process about which the general public knows relatively little,” the institute notes.

The DGRU also criticised the fact that the JSC had allocated “effectively three weeks or less” for interested organisations to research the candidates’ suitability for appointment. “We respectfully submit that this gives insufficient time to conduct adequate, in-depth research into the judicial backgrounds of the candidates,” the report suggested.

Judge Masipa is unquestionably the highest-profile candidate being interviewed this week, as a result of her involvement in the Pistorius case. “I’m sure you are aware you are the most famous judge in the country,” Mogoeng told her, with Justice Minister Masutha later clarifying that Masipa was “one of the most famous judges in the world”.

This high profile seems to come at a cost, other commissioners suggested. ANC MP Mathole Motshekga asked if Masipa was worried about the “stigma” from the Pistorius case following her to the Limpopo judge president position. Here Mogoeng seemed to intervene on Masipa’s behalf, saying that he too had been appointed under an ignorant assumption: that he was “Zuma’s puppet”.

Masipa denied that she was “stigmatised” following the Pistorius judgment. “People were expecting a different outcome. They were just expressing frustration,” she said. “Perhaps I am too naïve.” She told Modise she was alive to the possibility that the appeal court might disagree with her judgment on the Pistorius matter.

But as the DGRU’s report reminds us, a number of other current nominees have presided over far more politically significant cases than Pistorius’.

Judge Rammaka Mathopo, for instance, who is under consideration for the Supreme Court of Appeal, ruled in 2013 that the NPA had five days to give the DA transcripts of the so-called “spy tapes”. In Mathopo’s judgement, he wrote that he “failed to understand [President Zuma’s] assertion that disclosure of the transcripts would affect his right to confidentiality or privilege”.

Judge Francis Legodi, who is in competition for the Limpopo judge president role, was a former commissioner on the arms deal inquiry, but he resigned on the eve of public hearings, apparently due to unhappiness over how the commission was being run. Legodi also ruled against Mark Shuttleworth in the billionaire’s legal challenge against the South African government’s exchange controls.

At Legodi’s JSC interview, Modise asked him whether he had “resigned” from the arms deal inquiry or been “relieved of his duties”. Legodi said that he had met with President Zuma at the time and explained his “personal reasons”, which had been accepted.

Legodi declined to elaborate on these reasons to the JSC, saying that they “remain personal”.

Malema wanted to know whether Legodi felt that the executive and legislature had a role to play in the judiciary. Legodi said that some degree of “understanding” between the three arms of the state was necessary. Malema, possibly with an eye on his own legal troubles, asked if it would be appropriate for a Justice Minister to deploy a judge to a particular court in order to further some agenda – even if it was a legitimate agenda like transformation.

“No minister can deploy a judge to go and perform judicial functions,” Legodi replied.

Malema asked if it would be considered unethical for a judge to have a close relationship with a politician.

“It could be seen as improper,” Legodi ventured.

Mogoeng joked that he thought Malema was about to produce some trump card at the end of a series of very pointed questions. “I am preparing the Chief Justice for discussions,” Malema replied ominously.

Beyond the issue of gender, the JSC interviews thus far have cast light on the negative conditions affecting the workings of South Africa’s criminal justice system. Jappie told the commission about the unsanitary state of the Durban High Court. Problems involving court infrastructure and maintenance have cropped up repeatedly, with several Limpopo candidates mentioning the fire which virtually levelled the Polokwane Magistrates’ Court in 2012.

Issues involving the functioning of magistrates’ courts also received attention, with chairperson of the Magistrates’ Commission Legodi questioned over the more than 150 vacant magistrates’ positions.

When Thokozile Masipa was questioned by Minister Masutha about what could be done about the waning public confidence in the criminal justice system, however, she suggested that “ignorance” might be to blame – as seen in the public’s lack of understanding of the bail system.

As midnight approached on Monday with the JSC still in session, it was clear that the body would not complete all its scheduled interviews for the day. Tuesday and Wednesday will see further judges judged. DM

Photo: Judge Thokozile Masipa during the appeal by the defence against the states appeal against the 5 year prison sentence on Pistorius at the Johannesburg High Court, Johannesburg, South Africa, 13 March 2015. EPA/KIM LUDBROOK/POOL