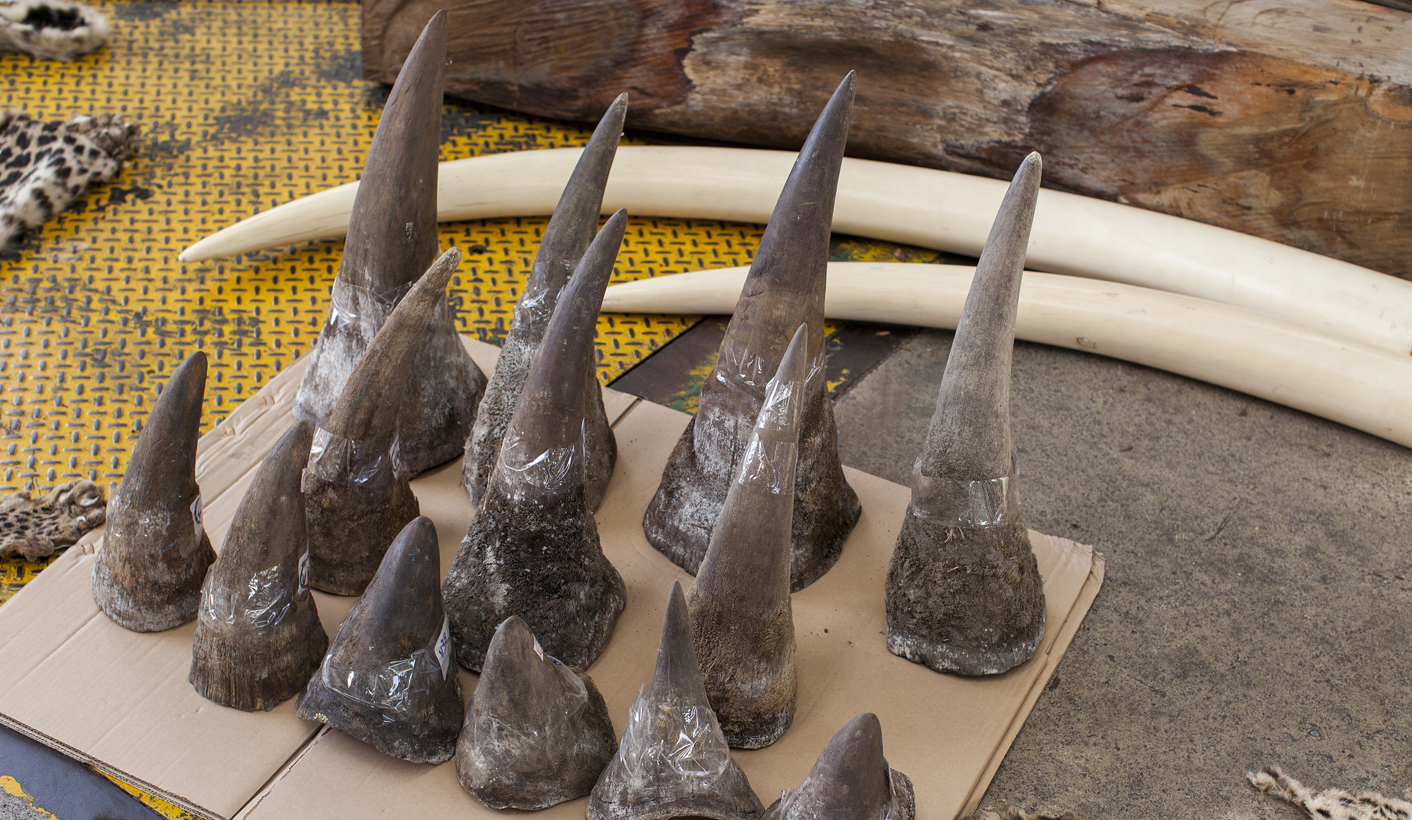 In the relatively polarised debate on whether a legalised trade in rhino horn can save the species from extinction, it seems that both sides are guilty of cherry picking to one degree or another. Sweeping statements and unsubstantiated assertions are commonplace, according to strategist ROSS HARVEY, with each side caricaturing the other, setting up straw men and obliterating them.

Ivo Vegter has been one of the strongest proponents of a legalised trade in rhino horn, and often makes the claim that anti-trade protagonists place implausible onus of ‘proof’ on the pro-trade lobby. Some of the popular rhetoric offered, for instance, at the department of environmental affairs’ committee of inquiry public hearings was that this is simply an Economics 101 issue: Increase supply, thereby suppressing price (and removing the incentive to poach), and the problem is solved. Considered reflection on supply and demand dynamics, however, show that such static models cannot be gainfully employed. Partial equilibrium theory’s supply and demand graphs rely on unrealistic assumptions such as perfect competition and symmetric, full information. Those factors are entirely absent from the poorly understood and dynamically complex trade in rhino horn. This is closer to an Economics 505 problem, and requires knowledge of game theory, ethics, marketing and dynamic modelling.

In the name of avoiding ‘101’ traps and providing specific responses to specific arguments, there are a few points in the column mentioned above that are worth addressing.

First, Vegter argues, “It seems naively hopeful that we can rely on demand-reduction programmes”. Even if they work, they will purportedly take longer than the time we have to save rhinos from extinction. But this is not substantiated with actual data from actual demand reduction campaigns that have successfully targeted trade in other products such as shark-fin soup. The majority of known demand for rhino horn is currently concentrated among elite consumers in Vietnam. This provides a strong strategic reason to allocate capital towards psychologically effective demand reduction campaigns. An integral part of any demand function is ‘consumer preferences’, which are dynamic and can shift relatively rapidly in response to persuasive marketing and advertising. Vegter argues that it is patronising to attempt to persuade Asian consumers that rhino horn is the least effective and most expensive medicinal cure for ailments such as fevers. It is a “faith that will be hard to shake”. However, this view appears more patronising than persuading consumers to abandon such faith. Advertisers consistently attempt to change consumer preferences and we don’t accuse them of being patronising. Worse than patronising, from an ethical perspective, is to endorse trade in a product that has medicinal value of close to zero.

One thing that is likely to counteract the effects of demand-reduction campaigns, though, is mixed messaging. Sending ambiguous signals to potential markets, as South Africa is currently doing, will likely result in undermining demand reduction efficacy. Pro-traders are too quick to jump to the conclusion that demand reduction is ineffective, but they seem unwilling to control for factors such as ambiguous supply-side signals. Moreover, awareness campaigns are different animals to specifically targeted reduction campaigns.

Vegter confusingly argues, “stigmatising the product among buyers can’t do much harm” (as an interim measure). A large part of the rationale behind a legalised trade, however, is to generate sufficient revenue for rhino owners to incentivise them to keep living stock. In Vegter’s words, “On a game farm, it stays if it pays.” But it’s not likely to pay in this sense if we stigmatise demand. In order for it to pay, a legalised supply would have to be efficiently marketed to keep prices high. On the supply side, the pro-trade rationale is to increase supply so that prices would fall and thereby disincentivise poaching. Again, this seems to run counter to the ‘if it pays, it stays’ argument.

It seems that on the demand side, pro-traders want it both ways, like Eskom – ‘please buy our product, but don’t use it too extensively’. On a strategic level, game theory necessitates consideration of how dealer syndicates may respond. The pro trade arguments often fail to acknowledge the power and sophistication of dealer syndicates supplying illegal horn. They are unlikely to allow their markets to be lost without extensive counter efforts, which could drive up demand. The best natural experiment economists could hope for on the demand side is to send an unambiguous signal to the market that trade in rhino horn is over, complemented by targeted demand reduction campaigns. Vegter also does not address the concern that a legalised trade may spark demand in other markets and totally override any stigma effects that are currently operating in those markets. He provided a link to an article in one column (that unfortunately goes to the Hollard website) that is meant to address these complexities.

Second, Vegter supports (with some initial misgivings that he seems prepared to suppress) Michael Eustace’s supply side argument that the best mechanism for controlling the legal trade would be a state-run cartel (using De Beers as the supporting example). There are a number of problems with this that remain unaddressed by the pro-trade arguments. The De Beers cartel was successful because its marketing campaign was brilliant, and it was genuinely able to control supply into the market. This meant that even in the context of price-elastic demand, they could keep prices high and demand constant. Pro-traders would therefore have to decide whether we wanted an unfettered laissez-faire trade with high prices and mass consumption, or whether to flood the market to suppress prices. But these are mutually exclusive objectives.

It is also not clear whether a “government-controlled central selling organisation” is likely to win support at CITES, or that “its great advantage is tight control over illicit trade”. The latter is especially confusing. On what grounds should we believe that the government could run a successful rhino horn cartel? Such a cartel would be competing with long-established supply and distribution networks (operated by sophisticated syndicates with long-term business plans, including stockpiling.) Farmed rhino would be supplied at higher cost than poached rhino. Therefore it seems to me that such a move risks creating two parallel markets – one illicit (a continuation) and one legitimate (new). Even the pro-trade academics (in a paper that Vegter cites approvingly) admit that a necessary condition for ensuring the success of a cartel is that it would supply the market more cheaply than poaching. In order for the cartel to work in favour of conservation, it would have to supply the market less expensively than at present, and it’s not clear that it could, especially given the high political and economic transaction costs of operating a cartel.

Finally, the idea that it could control illicit trade seems like a rather rash assumption, considering the substantial amounts of illegal ivory being laundered through legal outlets in China. How would it prevent such laundering, especially given the opportunities for corruption on a number of different levels? For instance, it seems easy enough for syndicates to bribe customs officials at present, and it seems that even exclusive ‘government-to-government’ trade would be susceptible to unproductive rent seeking. To continue the diamond analogy, the Kimberley Process appears to have been relatively ineffective in preventing the flow of ‘blood diamonds’, and politically weak in terms of holding offending governments to account. Pro-trade arguments appear not to have fully considered how these difficulties would be resolved.

Vegter is correct that we are running out of time. Politically, he grants that it is unproductive to try to convince CITES of the merits of an unfettered trade. However, the idea that a cartel-operated trade would be more palatable doesn’t seem to hold, especially given that it would undermine marketing campaigns to increase the stigma of purchasing rhino horn, even if it was successful in preventing the laundering of illegal supply.

In closing, it appears that the least complicated way forward, given this is a second-best world, would be to promote unambiguous demand reduction in a strategically targeted way. Start with the most price-inelastic consumers first. If their demand curve shifts in, the price will drop fastest, creating a domino effect and disincentivising poaching. Law enforcement efforts are then likely to be more effective because the scale and intensity of the problem may have been reduced. To blame the CITES ban as the exclusive factor contributing to our current woes is logically equivalent to erecting a straw man. It is however true that the ban is relatively powerless in the context of demand explosion. But ambiguous supply signals remain a confounding variable. Supply-side attempts to deal with the problem are likely to fail for as long as we know so little about the dynamic process by which eventual price is determined. Allocating scarce capital towards better understanding demand heterogeneity, and marketing accordingly – to suppress consumption – seems more efficient than incurring the high transaction costs of establishing a cartel, and the downside risks associated with such a move. DM

Ross Harvey has an M.Phil from UCT in Public Policy and is currently pursuing a PhD in Economics. He writes in his personal capacity, and his views in no way reflect the official position of the research institute for which he works. He was however involved in constructing the institute’s submission presented to the Committee of Inquiry hearings referenced above.