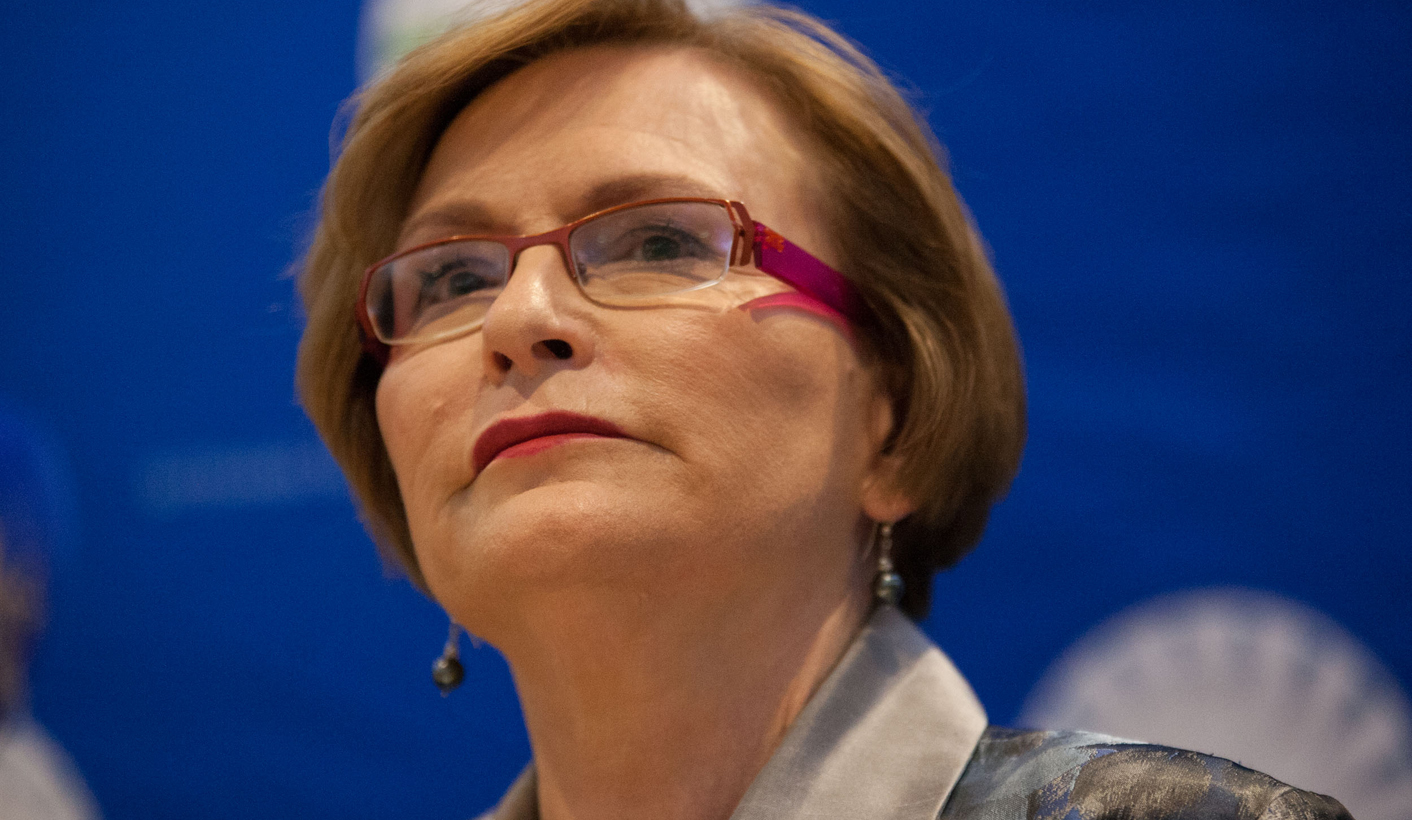 For eight years, overseeing the party's growth, Helen Zille has led the Democratic Alliance. Sunday's announcement that she will not run for re-election came as a surprise, both to the public and many leaders of the party, opening up the leadership race for the country's main opposition party. It's a pivotal moment that will define the future of the DA. By GREG NICOLSON.

On Thursday last week Premier Helen Zille met with those she trusted and listed the pros and cons of contesting next month’s party election. Often asked how long she would stay on as leader of the DA, she said on Sunday during a press conference in City Lodge at OR Tambo International Airport, “I’ve always answered, ‘I will know when the time is right.’ And believe me, I know that the time is right, and that is the reason that I will not be making myself available for re-election on the 9th of May.”

The decision came from both intuition and balancing the party’s interests. It was long-time coming, but when it came, it came quickly. She compared it to a decision she made when she was once engaged to a New Yorker. She’d had doubts for months, sat up all night, and then had decided. “When I’d made that decision, I had to phone my mother and father, who were already on the way to my wedding, and say to them, ‘This isn’t right and I’m not doing it.’ Now, that decision was months in coming, but when I made the decision, I knew it was right.”

Zille has led the DA for eight years, overseeing the party’s growth, and Sunday’s announcement came as a surprise, both to the public and many leaders of the party, leaving many stunned and opening up the leadership race for the country’s main opposition party.

“I know it’s slightly early…but believe me, you don’t want to be the kind of leader that everyone says, ‘When the hell is she going to get out of that job?’ And you don’t want to be slightly late,” Zille explained on Sunday. “My decision to stand down is because although I believe the party will grow under my leadership in 2016 at the local government elections, it has the potential to do even better under a fresh new leadership team, and my role as the leader of the DA is to make sure that we maximise our votes.” She argued that stepping down at the party’s 2017-2018 conference would not give that new leadership time to prepare for the 2019 national and provincial elections, when the DA hopes to govern the country in a coalition government.

“The reason that I believe I would be the wrong outcome in this particular election is because I believe that a new team could grow the party more and that is why I think it is essential to grow the party more and to grow it faster. As I said, we are in a race against time and we can’t lose a single minute and we can’t lose a single vote,” said Zille.

Her decision has thrown open the party’s elections next month to be held at its national congress in Port Elizabeth. After the press conference on Sunday, party leaders expressed shock at Zille’s decision. “Some people believe I should stay,” said the Western Cape premier. “Some people agreed with me that this is the right timing. Some people believed that I should continue. All things considered, and weighing up all the options, [I had] to draw a conclusion as to what is in the best interests of the DA.”

On Facebook, the DA’s Western Cape MEC for Human Settlements Bonginkosi Madikizela expressed his disappointment, and worried about the public’s perception of the decision: “I wish I could be politically correct and say let us respect Helen’s wishes, blah blah blah, but I don’t accept Helen’s decision to step down and her reasons do not make sense to me. U do not make such announcement less than 4 weeks before the Congress and expect us to accept it.”

Zille claimed there were positives of the little time now available for campaigning. She said it would avoid a drawn-out, bruising battle, and once a new leader was appointed he or she could focus on preparing the party for future elections. “There was not a single individual that pushed me, not one and not one single suggestion. I made that decision,” she added.

But there is already speculation that Zille is trying to engineer a succession plan. During her time leading the party, she has promoted transformation and supported certain candidates for election into top spots. During the short-lived union between Agang and the DA, Zille was prepared to step down as party leader for Mamphele Ramphele, and her decision not to contest these elections could benefit the party’s leader of Parliament, Mmusi Maimane. He has risen rapidly and is likely the most well-known leader after Zille, while Lindiwe Mazibuko remains outside of the country. As a young, black leader whose popularity has risen while he has been in Parliament, Maimane seems a likely fit for the leadership role.

“You really need to accept that this decision was never pre-planned and there is no cynical plot at any point,” said Zille, dismissing claims that she might be trying to influence the election. Looking at her time as leader, she said she regretted getting involved in internal election campaigns. “I am not getting involved in this, neither through the timing nor the planning, nor the contextualising, and I have really made it my business not to get involved, because I learned that that was one of the mistakes I’ve made in the past, and I certainly am not getting involved, even peripherally, through such things as timing.”

Zille said there was no discussion during their meeting on Sunday about succession. Two members no one seems to know, Jack Swart and Neil Els, plan to contest the leadership position. Maimane hasn’t made a decision and will assess the situation and talk to his family. Others are surely canvassing support.

Zille, who has been accused by some of creating divisions in the party and is sometimes chastised for her acerbic character, will not lead the party into the municipal elections or into the 2019 vote. It’s time for a fresh team to grow the voter base, she said. To grow the voter base, the DA now has an opportunity to appoint a black leader and someone without Zille’s baggage after her many battles during her time as the face of the DA.

But those hoping Zille will go into the wilderness will be disappointed. She plans to remain Western Cape premier until 2019 and will continue to support the party “in appropriate ways, and not getting in the way of the leadership”. DM

Photo: DA leader Helen Zille at City Lodge at OR Tambo airport on Sunday announced in a press conference she would not run for re-election as party leader. (Greg Nicolson)