What will be the ANC’s wake-up call – #SAisFalling? 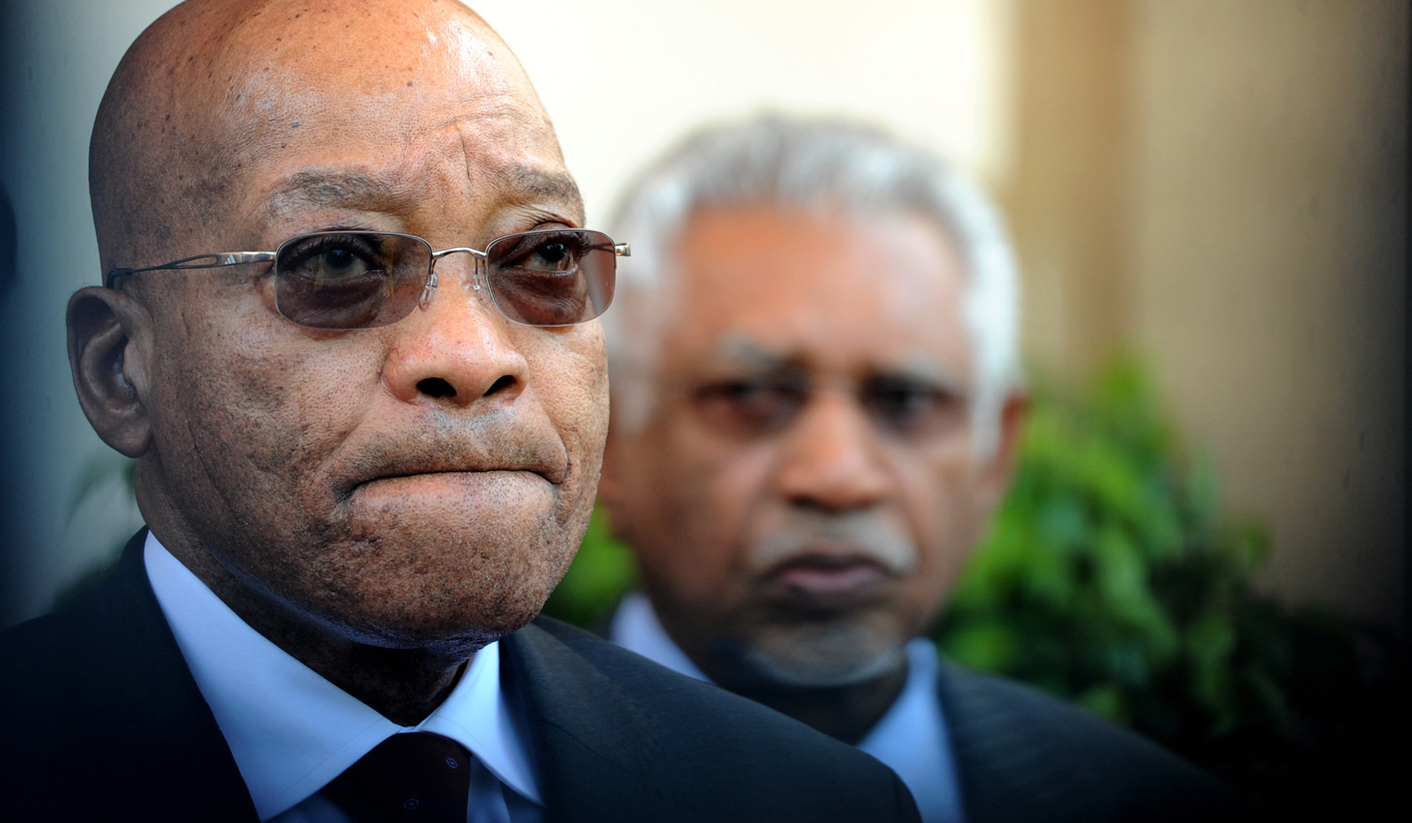 The revolution might not be televised, but it certainly will be hashtagged. #RhodesMustFall is the latest lightning rod campaign signalling a restlessness in society against the status quo. The turbulence and leadership battles in key state institutions, the continued economic decline, factional conflicts in ANC structures and the rupture in Cosatu should be a cause for concern in the ruling party and raise questions about the state of leadership. Not so, according to ANC secretary general Gwede Mantashe. These issues are all separate and there is no need for the ANC to pay special attention, he says. So what hashtag will get the alarm bells ringing at Luthuli House? By RANJENI MUNUSAMY.

The ANC National General Council, initially scheduled for June this year, now postponed till October, will be a fascinating gathering. It will be a mid term review of the ANC’s progress in implementing the resolutions of its 53rd national conference in Mangaung in 2012. Since that conference, the ANC has dropped electoral support nationally and in Gauteng in particular, faced a breakaway in the form of the Economic Freedom Fighters (EFF) and the disintegration of Cosatu with the expulsion of its general secretary Zwelinzima Vavi and its biggest affiliate Numsa. The ANC Youth League (ANCYL) has become virtually non-existent with first a task team running it and now no-one in particular.

There has also been an escalation in turbulence in state institutions such as the National Prosecuting Authority, the SA Police Service and the Revenue Service as well as in state-owned companies such as Eskom, South African Airways, the SABC and the SA Post Office. When the ANC national executive committee met last weekend, it was also the first meeting since the State of the Nation Address commotion in Parliament that saw the EFF being forcibly removed from the House. There had also been a failed motion of no confidence debate in Parliament against the president.

The NEC statement issued last Monday made mention of a few of the issues, but not all. The NEC meeting took place prior to the Cosatu central executive committee voting to dismiss Vavi, but the writing was on the wall that the federation would axe its general secretary. In response to questions at a media briefing, ANC secretary general Gwede Mantashe appeared to discourage such drastic action, saying: “Expelling is the easiest decision to take. The most complex part is after that what happens”.

However, a report in the Sunday Times this weekend said President Jacob Zuma “pressured” Cosatu to take a hard line on Vavi while speaking at the NEC meeting. The report said Zuma had expressed frustration over Cosatu’s “failure to act” against those causing divisions in its ranks.

It is difficult to gauge whether the post-NEC ANC statements are an accurate reflection of the discussions at the meetings as there are often leaks that give a different reflection of the dialogue to what Mantashe announces publicly. Any attempt to broach this with the secretary general would no doubt prompt one of his infamous dressing-downs about journalists and their sources.

However, even the off-the-record versions of last week’s meeting did not give the impression that the alarm bells are ringing in the ruling party, considering the state of affairs in the country. Even the parlous state of Eskom, with an unstable supply of power, with the entire senior management and the chairman of the board suspended, prompted Mantashe to say that the ANC viewed this as a “positive crisis”. He said the crisis came as a result of government’s success in connecting households that were deprived of power and this created pressure on generation capacity.

A question from Daily Maverick about whether there was any concern or analysis by the ANC about why there were now multiple crises in the state and the alliance resulted in an irritated response from Mantashe. He contested the question, wanting to know why the problems in government were being conflated with the political party, where he claimed there were no major problems. This is despite factional battles being prevalent in many ANC structures, the latest of which has caused discord in its biggest and hitherto most powerful province, KwaZulu-Natal.

The need for a rerun of the eThekwini regional conference was a “simple” matter, Mantashe claimed. He said a few branches that did not pass audit were allowed to participate in the conference and therefore it was nullified and has to reconvene. However, it is well known that the region is split along factional lines and the faction that won the conference could influence the position of that province at upcoming national conferences. This has caused some level of discomfort in the national leadership, not least of which, the president who has relied on the united support of KwaZulu-Natal to maintain his power base.

The official ANC statement mentioned none of this, of course. On the multiple problems in state institutions, the party said: “The NEC noted with serious concern the developments in a number of institutions of state including Eskom, the SABC, the Hawks, the National Prosecuting Authority, and the IPID (Independent Police Investigative Directorate) amongst others. Whilst the NEC believes that these developments have the potential to undermine the legitimacy and authority of the state in the minds of the public and negate the work of building of a developmental state with stability of leadership as one of its defining features, the NEC is confident that these matters are receiving the necessary and urgent attention from the ANC deployees in government.”

So no need for any examination then about why all these institutions were in turmoil and whether anybody should be held accountable for their breakdown? If you have to go down that path, it would have to call into question the state of leadership of the country and the party, and that is not a conversation the ANC NEC wants to have.

But that could be a conversation the postponed NGC might want to have. While the 80-member NEC are people mostly elected from a factional slate at the Mangaung conference, and therefore loyal to the dominant faction in the ANC, the NGC will be made up of about 4,000 delegates, mostly from branches across the country. Previous NGC meetings, in 2005 and 2010, upset the apple cart by challenging the leadership and the status quo.

Considering the state of affairs in the country with the poor performance of the economy, the breakdown of institutions of the state, the chaos in Parliament and bottom up campaigns, such as land occupations and defacing of colonial and apartheid era statues, it is highly unlikely that the mass membership of the ANC would be content to let things be. There is clearly a growing restlessness in the country, which is manifesting in different ways, including outbreaks of xenophobic attacks and damage to symbols of oppression and subjugation.

While the ANC leadership might be disconnected and insulated from sentiment on the ground, it is unlikely that branch members are immune to the frustrations in communities. And while the NEC might be able to pass off the problems to its deployees, the people who interface with the unemployed, the landless and the impoverished know the anger and anxiety of having to deal with the rising cost of living and frustration with the slow pace of change.

The domino effect of the #RhodesMustFall campaign is clearly a symptom of such frustrations. The ANC seems to have been caught off guard by the intensity of sentiment against historical symbols and has yet to come up with a consolidated response as to how to deal with the issue nationally. There is also in all probability some denial about the subliminal message behind this campaign: transformation and change must come in line with the principles and values of a democratic South Africa.

The EFF, which introduced the issue of tearing down statues and symbols of colonialism and Apartheid as soon as it was elected into Parliament last year, is using the campaign to depict the ANC as a protector of the status quo. It is also leading a land occupation campaign that is likely to cause a dilemma for government when it tries to remove the land invaders.

The EFF mobilises on community grievances and also knows the ANC’s weaknesses in trying to avoid these.

The ANC needs to have and lead the hard conversations, or it will be forced into them and have no control when angry people take matters into their own hands. The tail seems to be wagging the dog on many issues and perhaps it will take a mass gathering of the ANC membership to prompt a reality check. Or perhaps it will take more institutions to fall and chaos to reign before we face a hashtag the ANC will have to pay attention to.

#SAisFalling might seem far-fetched but we are on a slippery slide in that direction. DM

Photo: President Jacob Zuma is seen during a meeting with members of the SA Editors’ Forum at the presidential guesthouse in Pretoria on Friday, 20 February 2015. In the background is presidential spokesperson Mac Maharaj. Picture: Werner Beukes/SAPA