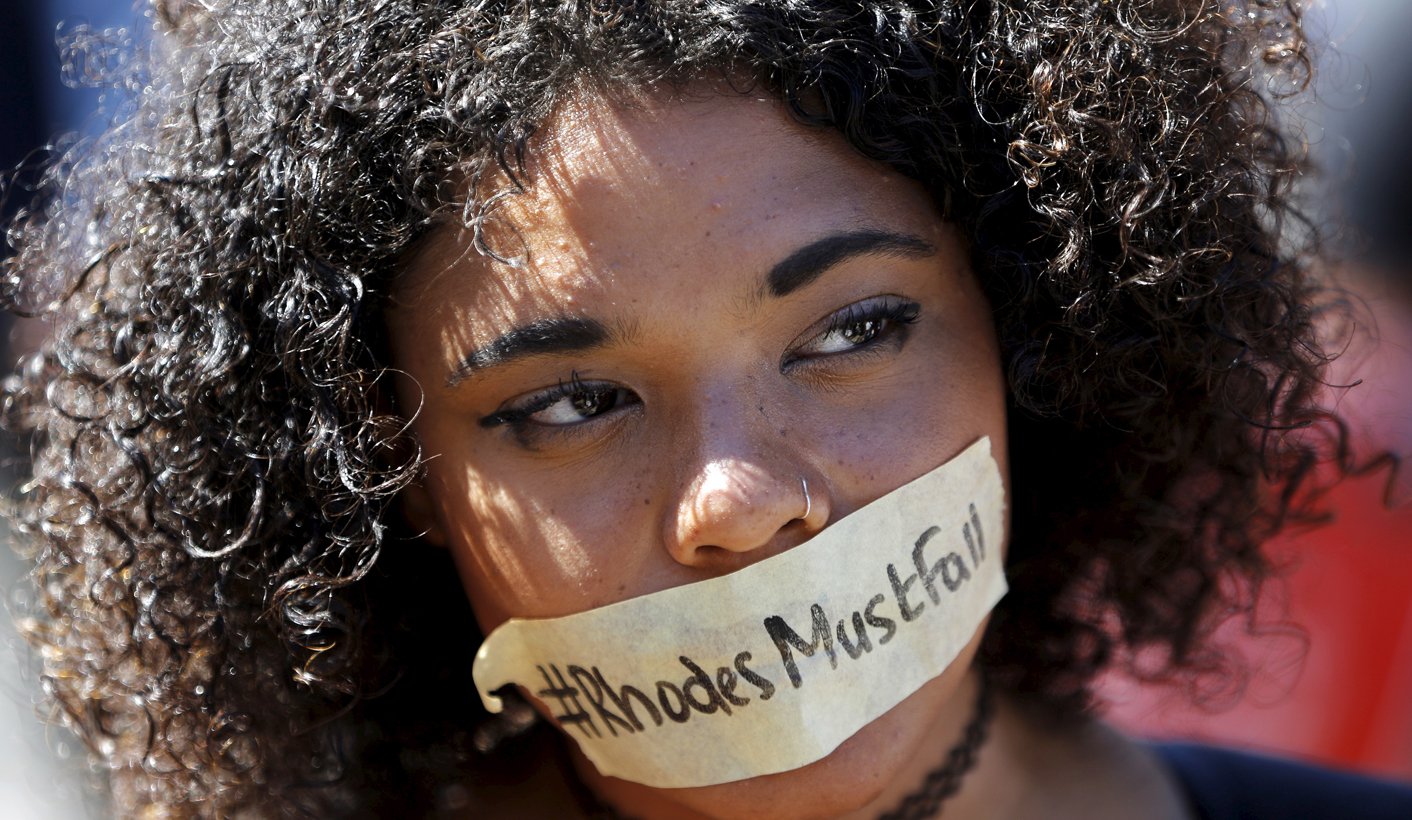 It has been a month since UCT student Chumani Maxwele emptied human waste over a statue of Cecil John Rhodes in a protest that soon spread to other universities including Rhodes, UKZN and Wits. The student protests have triggered a national debate about transformation, academic pedagogy as well as broader issues including history, remembrance and dispossession. A recent survey has revealed who is driving the debate. By MARIANNE THAMM.

The biggest threat to the historic moment that the #RhodesMustFall movement presents is not that the leadership of the academic institutions at which it is aimed would attempt to suppress or stop it, but that it would be hijacked, redirected and defanged by political opportunists.

Of course the currents that led to Chumani Maxwele and other students dumping faeces on the statue of Rhodes – a symbolic embodiment of colonial imperialism and dispossession – on an autumn afternoon on 9 March had been brewing for several years. But it was this single, visible, physical act that propelled the debate out of a genteel and contained offices and corridors of academia and into the public realm.

Discussions about the transformation of academic spaces (or lack thereof), particularly with regard to the abysmal numbers of black lecturers and heads of departments, as well as criticism of the entrenched curriculum, are not new. Writing in Business Day this week, Nomalanga Mkhize, a lecturer in history at Rhodes University, recalled the “Mamdani Affair”at UCT in 1996 when scholar Mahmood Mamdani, who held the AC Jordan chair in the Centre for African Studies, had challenged the university to place African scholarship at the centre of the curriculum.

Mamdani, regarded as one of the world’s leading intellectuals, was met with fierce resistance from the entrenched UCT establishment and was suspended from the curriculum planning committee before leaving the UCT for Columbia University in the United States.

Francis Nyamnjoh, Professor of Social Anthropology at UCT, also has written widely on the resilience of colonial education in Africa and its effect on African scholars and students. Towards the end of 2014, a group of black academics at UCT, including Xolela Mangcu, highlighted the lack of transformation.

But it was only when black students themselves entered the arena that it became a national issue with far-reaching implications, beyond the walls of academia, and which could speak to our very sense of self and the country’s future.

Not since the 1970s, with the formation of SASO by Steve Biko and the New Left Student Movement by Rick Turner, have the country’s students so organically organised and rallied around key issues that affect their daily lives and futures.

The students who protested at the country’s universities during the 1980s had a clear and obvious enemy – the Apartheid state but this contemporary student movement – with its roots in Biko’s black consciousness – promises real engagement 21 years into our democracy. White students too (well, at UCT, at least) have launched The White Privilege Project in an attempt to determine the role of white students in the #RhodesMustFall movement. And for the first time in three decades, Rick Turner’s thoughts and ideas are being articulated and explored by a younger generation of white South Africans.

That the country’s young thinkers and intellectuals have taken up the challenge, rather than its politicians, is what is exciting and significant. Beholden to no one but themselves and their future, these young South Africans have announced that they have a vision and a goal and that they are determined to see it reach fruition.

That Maxwele happens to be the student arrested for allegedly flipping the bird at President Jacob Zuma’s speeding blue light brigade in 2010 adds a certain amount of accidental cachet.

Many voices have contributed to the ongoing debate since the 9 March poo protest and the good news, at least according to a Media Tenor survey, is that the debate is being driven by journalists and the students themselves.

Jordan Griffiths, a researcher with Media Tenor, said that a sample of 50 articles across print and online media in the first few weeks showed that it was journalists and the students themselves who were shaping the national debate.

In terms of its “framing”, the study found that the two dominant terms that appeared most frequently were “transformation” and “redress”.

“A significant amount of negativity has been directed to the institution for both issues. The Rhodes statue has thus become a major symbol through which debates on the creation of an inclusive student environment are being directed. The most dominant narrative being that the removal of the statue is just one small step towards facilitating transformation at the university,” said Jordan.

While the #RhodesMustFall debate had drawn in commentary from across South Africa with a number of different groups and individuals contributing articles or being quoted in the media, as a group, said Jordan, students at UCT had generated high volumes of coverage.

“This makes sense as it has been a student-led movement. Max Price as Vice-Chancellor has also had strong volumes of coverage and interestingly, we have also seen Xolela Mangcu, an associate professor of sociology at UCT, generate coverage through articles.”

It is unsurprising, in the light of EFF attempts to dismantle and deface other statues across the country, that the most prominent politician to have hopped on the bandwagon is EFF CIC, Julius Malema.

The Media Tenor conclusion is that the South African media has been a “major player” in setting the agenda for the #RhodesMustFall movement.

“What initially started as a Twitter trend quickly moved over into mainstream media and has seen a variety of different commentators weighing in. Our monitoring shows that hundreds of pieces have been produced by local media and across blogging platforms as well,” added Jordan.

The overwhelming media sentiment, the survey found, was directed towards the removal, an issue that UCT’s council will decide on Wednesday. DM

Photo: A student wears a sticker calling for the removal of a statue of Cecil John Rhodes from the campus of the University of Cape Town March 20, 2015. REUTERS/Mike Hutchings