Flying high: A history of presidential jets in Africa 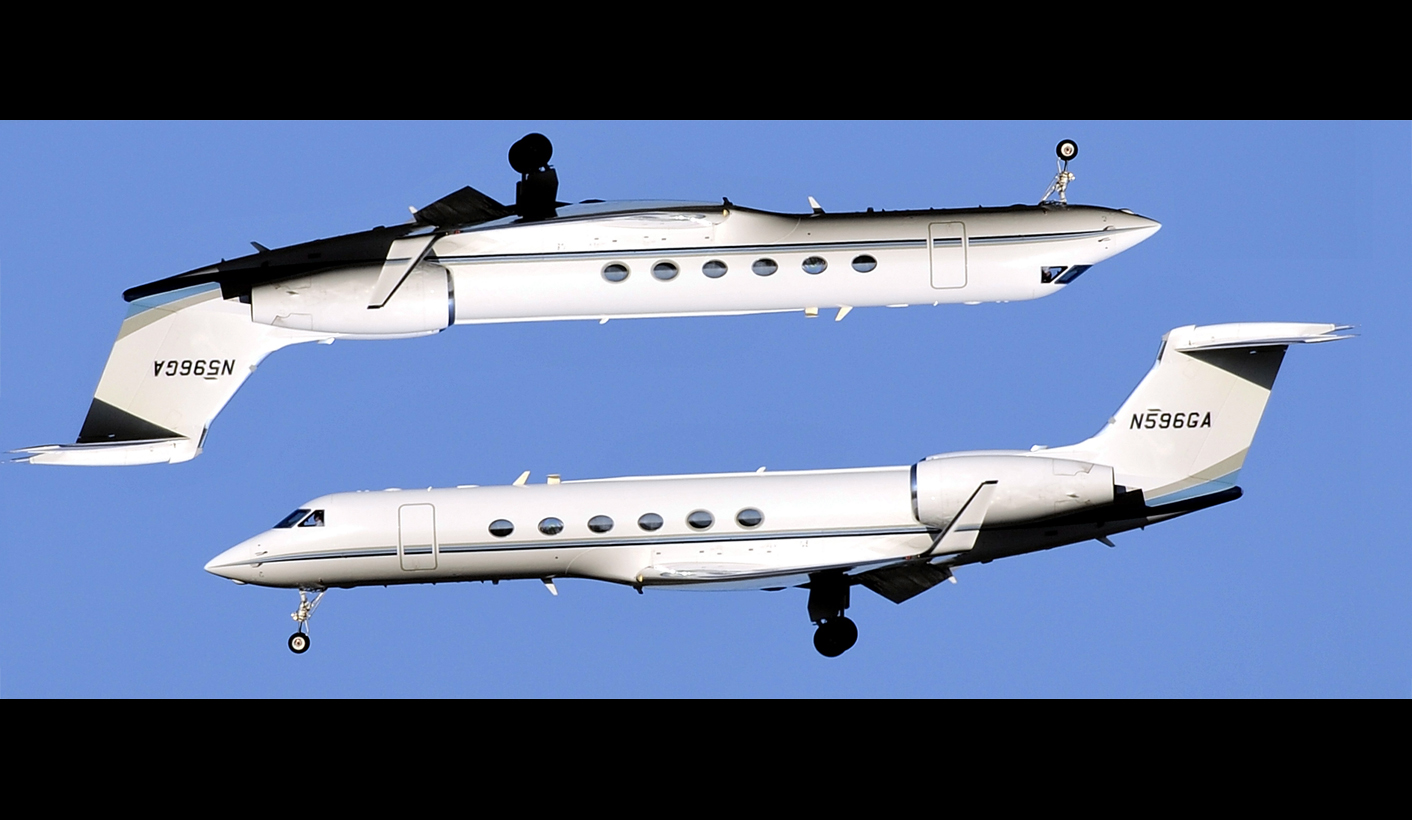 South Africa’s President Jacob Zuma wants a really expensive jet fleet. His Cabinet wants one too. In this, he has company. RICHARD POPLAK straps himself in, and looks at the history of African presidential high flyers.

(This article first appeared in the April/May edition of Africa in Fact.)

No item is more important to a head of state’s bucket bling list than a fancy new jet. VIP aircraft are both the signs and signifiers of power—when Air Force One and its attendant C-130s disgorge US President Barack Obama and his phalanx of black Suburbans on foreign tarmac, we know the most powerful man in the world has arrived. The gold standard was established by Prince Alwaleed bin Talal bin Abdulaziz al Saud, the Saudi billionaire royal who once dropped half a billion dollars on a tricked-out Airbus A380, a replacement for his tricked-out 747-SP, which had become too pokey for his requirements. The mot jus, simultaneously noun and verb, is “fleet”: every president needs one.

African heads of state have had a long and troubled history with upmarket planes. Readers of this publication are unlikely to need a primer on African per capita GDP data, but suffice to say that when the VIP aircraft era properly took off in the 1970s, those figures were consistently low. Nonetheless, the biggest Big Man of them all, Zaire’s Mobutu Sese Seko, leased a Concorde, which he kept on a specially built airstrip in Gbadolite, his luxurious compound in the northern jungle. Rainforest has now swallowed that runway, and the age of austerity has arrived. But presidents still need to get from A to B. They like to do so in style.

But who pays for all this flying flair? African taxpayers do. Despite more pressing issues such as schools, clinics, roads and electricity, the comfort of presidents takes precedence. When African taxpayers don’t pony up for their leaders’ wings, when the aircraft in question is a gift from an outsider, the gift usually comes with geopolitical strings that are easily woven into a hangman’s noose.

We can divide presidential travel into three categories. First and most impressive are passenger jets retrofitted to cater to the needs of the world’s most important people. Air Force One is the most famous example, but by no means the most extravagant. Second are the smaller private jets that make regular appearances in Jay-Z videos, and most often cater to the higher end of the business crowd. And then certain presidents book themselves and their entourage on commercial airlines—never with the plebs in steerage, of course. But even first-class travel counts as a welcome concession to economic realities.

Africa can claim several belonging to the first category. The Moroccan royal family swans about in a host of big craft, including a 737-8KB, the stretch version of the ubiquitous Boeing 737 that forms the bulk of so many commercial fleets. Libya’s Muammar Qaddafi fluttered in a gold-plated (not literally, but close enough) Airbus A340—breathless news reports put its cost about $411m. According to the independent Zimbabwean press, Robert Mugabe owes $40 million on the $400m Boeing 767 that just touched down in South Africa, but more often ferries him to his doctor’s appointments in faraway Asian capitals. The government of Egypt has use of an A340-200, a gift to its former president, Anwar Sadat, from the Saudi royal family.

The Nigerian Air Force maintained a 737 called Eagle One for ex-President Goodluck Jonathan, the flagship craft in an extensive presidential fleet. When Mr Jonathan emptied the hangar in Abuja and arrived in Kenya for a state visit in 2013, he was roundly mocked on social media. “Your president visited our country with seven private jets and that’s never happened before,” insisted a pundit. “We were all excited. Seven private jets only. I know there must be more but for us still that was ‘wow’. Everybody came in their own jets.”

Uhuru Kenyatta, Kenya’s president, has every right to be envious. His travel arrangements fall into the second, nearly self-effacing category: one plane, a specially customised Fokker 70, purchased brand new back in 1995, with seating for only 26.

The South African presidency must once have looked at Nigeria, its economic rival, with jealousy. Pretoria has had nothing but trouble with its presidential birds: President Jacob Zuma’s jet, Inkwazi (Zulu for “Fish Eagle”), spends most of its time in pieces. (The DA insists that it is in “mint condition.”) In 2012 there was talk in the press of the government spending just over $263m on 777-200 LR and Global Express 6000 Business Jet, which would have outfitted what was then the continent’s biggest economy with a very tidy fleet. With the planes still largely on the ground, in September 2014 President Zuma and his entourage chartered a flight to the United States, which cost taxpayers roughly $600,000. Turns out those same taxpayers are back in the Seattle dealership alongside their president, who is once again happy to write a cheque. This time, there appears to be no dodging the purchases.

The dreaded charter can, of course, function as a big drain on the state’s expenses. But by far the most common form of presidential transport is the business jet. One of the most common is the Dassault-Falcon 900. The French-built aircraft comes in a dazzling array of iterations, but is distinctive as the only tri-jet in production. Dependable, and in the 900LX configuration capable of flying almost 9,000km without touching down, the Dassault has found its way into a number of presidential hangars. Most famously, it was the plane that Joyce Banda of Malawi decided to return to the dealership when she became president in 2012, an unprecedented act of austerity that including scrapping a fleet of luxury Mercedes cars. “I am already used to hitchhiking,” Mrs Banda said.

But the corporate jet most rhapsodised in hip-hop songs and featured in countless episodes of Entourage is the Gulfstream IV. Botswana’s Ian Khama flies in one. So did Uganda’s Yoweri Musuveni until the better, fancier Gulfstream V launched a luxury coup d’avion. Mr Museveni bought one, as did Nigeria’s Mr Jonathan. Exasperatingly, the Gulfstream 650 has just hit the market, with a list price of about $65m. Expect to see a few at African airports in the near future.

The question, of course, is: do presidents need all of this airborne bling? Expedience is a factor: time is money, especially in politics. So is safety: we cannot have our presidents at risk in the sky. (Although, in this regard, three African liberation heroes have perished in private aircraft crashes: Barthélemy Boganda of the Central African Republic, John Garang of South Sudan, and Samora Machel of Mozambique [with Messrs Boganda and Machel under clouds of suspicion.]) Last is the prestige factor: we cannot have our presidents huddled with the masses in a teeming airport, waiting for a delayed flight to Rome.

That said, every time a presidential Gulfstream V jets over a local slum on the way to Davos or some other high-end forum, the dream of a fairer Africa takes another hit. It would be nice if our VIPs displayed the sangfroid necessary to shake up their travel itineraries with the occasional much cheaper commercial flight, especially to well-travelled destinations. Unlikely, though. It is tough hitchhiking once you are a member of the mile-high club. DM

Photo: A Gulfstream V owned by National Aircraft Leasing tail number N596GA heads into LaGuardia Airport in Queens, New York with its wheels down for landing as it passes over the USTA National Tennis Center in Flushing Meadows, New York, US on 01 September 2008. EPA/JOHN G. MABANGLO.