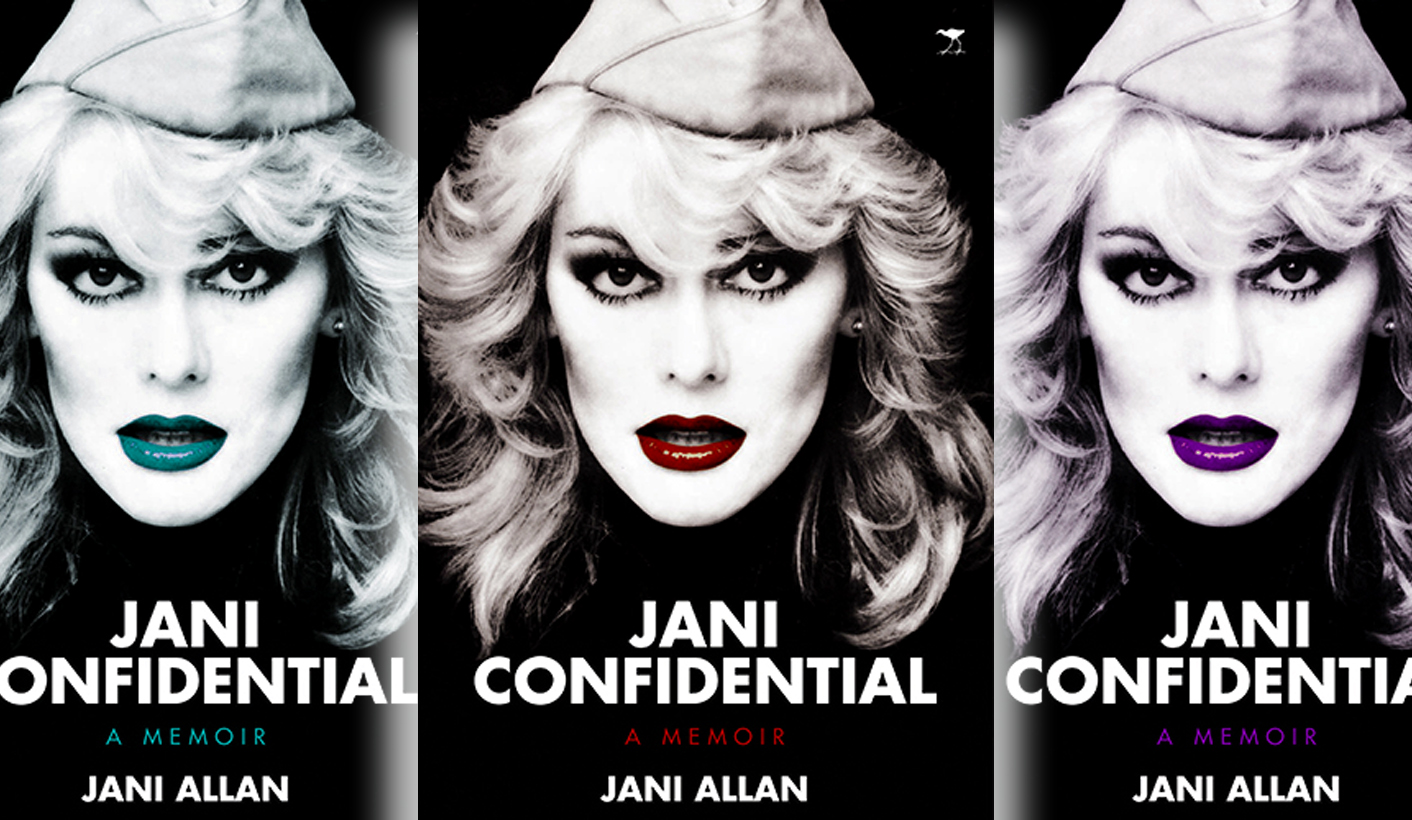 Celebrity columnist and media “it” girl Jani Allan’s memoir exposes not only the casual and brutal indifference of white South African life during Apartheid, but also how the triple forces of racism, sexism and self-delusion served to publicly unmake a talented and intelligent writer caught up in the toxic currents of the time. By MARIANNE THAMM.

The portrait of Jani Allan on the cover of her just-published memoir, Jani Confidential, which fixes the reader with its forthright gaze, is not the woman you will find enveloped between the pages of its soft cover.

This is the Jani Allan South Africa – white South Africa in particular – once loved (or loved to hate) and knew. The larger-than-life celebrity columnist with the country’s biggest-circulating weekly newspaper, The Sunday Times, during the region’s most excessive, violent and sadistic epoch.

It is the surface, superficial Jani. Bottle blonde, wearing a military-style side cap, heavily made up with angular cheekbones, her alluring, full, cherry red lips – mirroring a female primate in oestrus – an atavistic trigger for the powerful men in the country who desired, wooed and orbited her. It is Jani Allan wearing her full body armour, her armadillo carapace.

Ultimately none of it protected or buffered her.

For when it came, nothing and no one could or would stop the fall. Betrayed by almost everyone, and in some measure the architect of her own destruction, Jani Allan ended up like fresh road kill while many South Africans rubbernecked past the scene of her spectacular crash from stardom to ignominy and exile in America, an ageing, acerbic survivor, waiting tables with only her beloved Pomeranian for company.

For years Allan’s demise provided the most satisfying episode of Schadenfreude for many who had watched her rise to fame (but not fortune) enviously from the sidelines. She was once the most influential writer and columnist in the country, her writing eagerly read by millions every Sunday.

Here’s some vintage Allan on the time and place and captured in her memoir: “South Africa in the ‘80s was like Berlin before the war. People tried to blot out the reality of what was happening in the country with the same desperation. It was Gatsby with the style of the Charleston. The carelessness with which people treated each other was the same. People who outlived their usefulness were treated with electric indifference – as I would come to find out. I often wondered how long my social currency would last. Manicured insecurity was on the loose.”

Allan outlived her usefulness eventually, crushed by the magnitude of a manufactured scandal – that she had had an affair with the right-wing leader of the AWB – Eugene Terre’blanche. For this Allen paid the ultimate price, she lost her job and her reputation was utterly ruined in the process.

Hers is a cautionary tale of ambition, of self-delusion, of the dangers of the typically female affliction of “the need to please” which ultimately resulted in her ruin. It is a portrait of a time and a place, delicately (and often hilariously) captured by a woman who remains undoubtedly once of the most talented writers to emerge from that decade.

A writer who – because she was a woman in a decidedly man’s world – succumbed to the toxic and precarious scaffolding that propped up an amoral, immoral and deeply unconscious world. A fantasy wonderland, populated by indifferent white South Africans – the warped and wounded beneficiaries of Apartheid.

Of her hometown she writes: “Johannesburg has never been a place for the fastidious or the over-sensitive. It is hideous and detestable, luxury without order, sensual enjoyment without refinement, display without dignity” and “In South Africa acquisitiveness is not so much a virus as a chronic disease of epidemic proportions. Money is what death was to Keats. A preoccupation.”

The Allan you will find between the covers is a fleshed-out and complex woman, riddled with insecurities and a survivor of sexual abuse and the manipulations of the many men who crossed her path.

Allan was 18 when she discovered that her highly ambitious mother had adopted her. She, like the many stray animals her mother collected, was just another of these, to be pampered and cared for but not deeply loved. Her mother’s peculiar and puritanical views of sex shaped Allan’s own problematic sexuality. Here was a woman every man seemingly desired, who dressed so that men would notice and want her, but who had no real interest in sex.

Allan sketches an imposing, haughty and eccentric woman who wanted her clearly gifted daughter to excel. Allan’s mother – and an absent set of father figures – came to shape the complex and fragile psychology of this ingénue. An intelligent, talented and apparently self-possessed woman who ends up in a series of highly abusive relationships with men (and friends and colleagues) where she is stripped of all sense of self entirely.

But it was Sunday Times editor, Tertius Myburg, who not only provided her with her break as a columnist at the newspaper but who also propelled her – callously and calculatedly – towards the event that would be her undoing – her exclusive interview with the reviled Terre’blanche. It was an encounter that would not only serve the paper, Allan herself, the spies and spooks of the Apartheid state but that would beguile even Eugene (who was murdered on his farm in Ventersdorp in 2010). The interview was published; its tone and its texture was misunderstood and taken to be some sort of endorsement of the man and his ideologies. It was an assignment that was a poisoned chalice.

Allan’s memoir is searing in its honesty and insight, hilarious and unforgiving in its capturing of the key bargain-basement celebrities – DJs who drove around in Rolls Royces, politicians puffed up with self-importance, thieving socialites – who populated the landscape.

Here she is describing The Palace, once the most fashionable restaurant in Rosebank:

“The Palace cost millions to furnish. Within a month of its opening there were five Sabattini fish knives left. A wealthy Sandton socialite boasted that she had purloined an entire set of cutlery by slipping it piece by piece into her Louis Vuitton bucket bag.”

Jani Allan asks neither for sympathy or forgiveness. She is still quite capable of giving as good as she gets. Her memoir is a brave and rollicking read of a time and a place most of us are grateful no longer exists. There were many casualties of that time – and their lives play out on the periphery of this story now as they did then.

But Allan herself is a survivor, one of those people who, in losing it all, gained herself and more, and her memoir is written with this insight, humility and maturity. It is also filled with many unique Allanisms that characterised her writing style and that will have you laughing out loud.