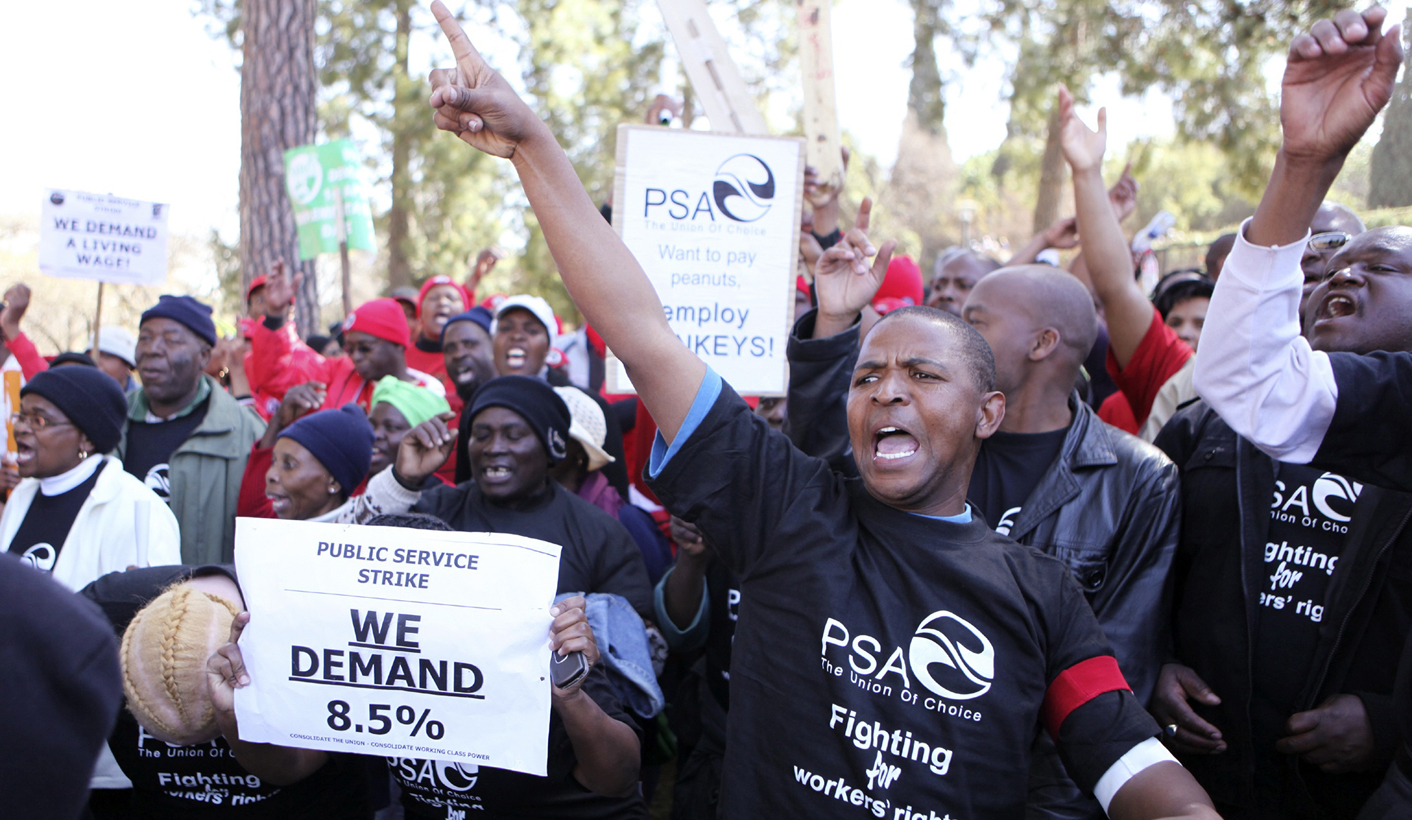 The public sector wage negotiations have been going on for months but after government declared a dispute on Friday unions are accusing it of acting in bad faith. Both parties hope a 30-day mediation process yields an agreement, but a strike could be coming. By GREG NICOLSON.

Addressing media on Wednesday, seven Cosatu public sector unions accused the state negotiators of acting in bad faith while trying to discuss a new wage agreement for 1.3 million public employees whose last bargaining agreement officially expired this week. The unions, Sadtu, Denosa, SAMA, Popcru, Nehawu, Sasawu and Pawusa, said they “are appalled and infuriated by the reckless and arrogant attitude of government in dealing with this year’s wage negotiations”.

While negotiations have faltered for months, the state declared a dispute on Friday, before the last deal had expired, which the unions said was unprecedented. An independent third party will now be appointed to act as a conciliator to mediate the dispute, fuelled by unions demanding double-digit increases and a boost in the housing allowance while the state looks to minimise increases in the public wage bill, which could hinder attempts to reduce the fiscal deficit in coming years.

“What is obvious from all this is that we are dealing with some unprecedented levels of provocation and intransigence from the employer. This has made it clear to us that we might have to mobilise the workers for a possible mass action in the public service,” said the Cosatu unions in a joint statement. Together, they represent around 58 percent of public service employees in sectors such as education, health, safety and security.

The unions will consult members and next week will provide an update on their position, which could lead to strikes that debilitate public services. “As working class organisations, we have an appreciation of the impact of the strikes have on the public and on service delivery. We know this because we are part of the working class. Our kids go to public schools and our families use public facilities. But we also know that we lose the rights we do not defend,” said Nehawu General Secretary Bereng Soke.

An agreement reached in 2012 saw workers achieve a seven percent increase in the first year and inflation plus one percent in the next two years, but in this round of negotiations the state has been determined to keep any pay rises close to inflation.

The unions started by demanding 15 percent increases with a housing allowance of R3,000, and a 28 percent hike in medical aid cover. The state’s opening offer of a five percent increase in pay was below last year’s inflation rate. After the unions dropped their salary demand to 10 percent to meet the state’s revised offer of 5.8 percent, the state then dropped its offer to five percent before settling on 4.8 percent (tied to predicted inflation) plus one percent for this year, with increases of inflation plus 0.5 percent for the next two years. Government has agreed to a 28.5 percent increase in the medical aid subsidy, to cover no increases in the last few years and rising healthcare costs, and is offering a housing allowance of R1,100 for all employees. The unions are still demanding a one-year deal with increases of 10 percent in pay and a total housing allowance of R1,500.

Magope Maphila, president of teachers union Sadtu, said the recent passing of Public Service and Administration Minister Collins Chabane had a “huge impact” on negotiations as Chabane was committed to resolving the issue as soon as possible. Maphila noted the changing leaders in the post in recent years, with Roy Padayachie passing away in 2012, Mildred Oliphant briefly taking over, Lindiwe Sisulu appointed to the job, and then Chabane taking it after the 2014 elections.

While state representatives have said they have made reasonable offers, union leaders on Wednesday decried the rising cost of living and cited an increase in taxes, fuel price rises, electricity costs and the price of medical aid schemes going up. While government spends over R400 billion, and rising, just under 40 percent of total expenditure, on employees, union leaders said well-paid employees take a chunk of those costs. They called on well-paid civil servants to take a pay cut if the government needs to cutback spending.

With bad blood between the unions and the state, a strike could soon interrupt government services. The conciliator has 30 days to try to resolve the issue, but if agreed by both parties, that process can be extended. Government employees will continue taking the same salaries until an agreement is reached and they will be back paid those increases from 1 April. DM