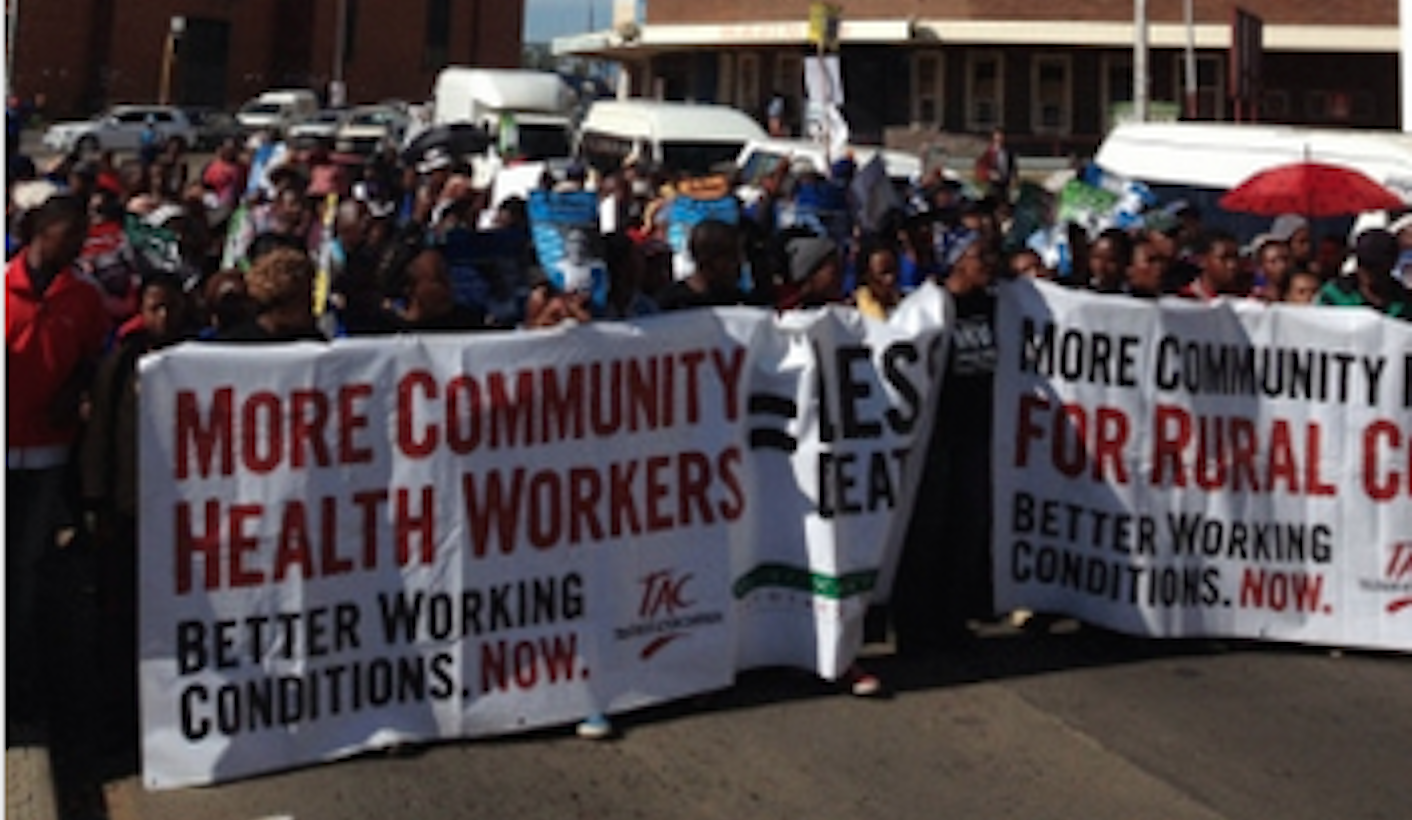 There were protests outside the Bloemfontein Magistrate's Court this morning, as a trial of health workers resumes amidst widespread dissatisfaction with the Free State health system and MEC Benny Malakoane. By MARY-ANNE GONTSANA

“Life is very tough; sometimes I wonder where I will get my next meal. My husband is unemployed so our source of income is my child’s support grant. R300 is not enough for a family of five.”

These are the words of Hazel Oliphant from a series of interviews conducted by the Treatment Action Campaign (TAC). Oliphant has been a community health worker for 11 years in Bloemfontein and is one of 118 people being tried today in the Bloemfontein Magistrate’s Court.

On 9 July 2014, over 100 CHWs and TAC activists from across the province started a vigil outside Bophelo House — headquarters of the Free State Health Department — protesting the state of the public health system in the Free State, their conditions of employment and the decision of the Free State MEC of Health, Benny Malakoane, to effectively terminate their employment without warning.

According to TAC, reports then emerged of MEC Malakoane phoning health workers to warn them that they would be arrested if they participated in the protest action. He demanded the names of those attending the protest, claims TAC. Police presence increased and they start negotiating with the health workers and TAC leadership.

The following day, 10 July, more police arrived on the scene and the protesters were ordered to disperse or face arrest. Police told protesters they had been sent by Malakoane and they started arresting health workers and TAC activists. Arrested protesters were taken to various police stations where they were charged for taking part in an illegal gathering. Later in the day another 50 TAC members were arrested for picketing outside Bophelo House and taken to Park Road police station.

TAC’s Lotti Rutter said the protesters were held for 36 hours. “Most of them were old people. How can you hold an aged person in prison for 36 hours? Initially 129 people were arrested but after a settlement was offered, some accepted the offer and only 118 people are now left facing trial. They have been to court about five times and as TAC we are calling for the charges to be dropped. A night vigil was held in Bloemfontein yesterday [on Sunday] and a march will also take place today in solidarity and support of the accused,” said Rutter.

Another health worker, who lost her job said she had always been passionate about helping people, which is why she became a nurse. “When I realized that I wasn’t able to reach that goal I opted for care working. I loved care working, although sometimes I came across stressful and moody patients but I would try cheering them up anyway. Also, working with poor TB patients who stayed in poorly ventilated informal settlements was a risk. I even contracted TB from one of my patients … Losing my job has put me in a very difficult situation. My husband is complaining and telling me to find a job. I have been trying to get a temporary job but I am struggling to find it. I have four children, two of which are from my previous marriage. My husband doesn’t support those two children and if I had a job I would be able to provide for them.”

Health worker Dicketseng Mdunga told how she even washed and took her patients to clinic using a wheelbarrow because she had no transport.

“The biggest problem we face is that we don’t have protection gear and patients can be very difficult when you want to help them. My one patient Mpho is very special to me. She was my first HIV-positive patient and it warms my heart to know that I was with her through it all. She reminds me why I started volunteering in the first place.”

“Since we were told to stop working I have been struggling to support my five children. I also have two orphan children staying with me. I have diabetes, heart problems and high blood pressure. I have to get medication and the income I got helped me and my family. Life is not good right now,” said Mdunga.

Last month, GroundUp published an account by whistleblowers’ on the dysfunctional state of the Free State health system. They wrote that the hospitals in Free State “stand in stark contrast to the posh offices in Bophelo House, Head Office of the Free State Department of Health.” The Mail & Guardian has also run a series of articles on the problems in the provincial health system.

GroundUp requested comment from the Free State government, but no response had been received by the time of publication. DM

Main Pic: Protestors in Bloemfontein this morning outside Pelonomi Regional Hospital. The protesters intend to march to the Bloemfontein Magistrate’s Court as well. (Photo courtesy of TAC)

Susan Comrie for amaBhungane • 23 hours ago

Africom may be looking for a new home