TB: Of campaigns and complications 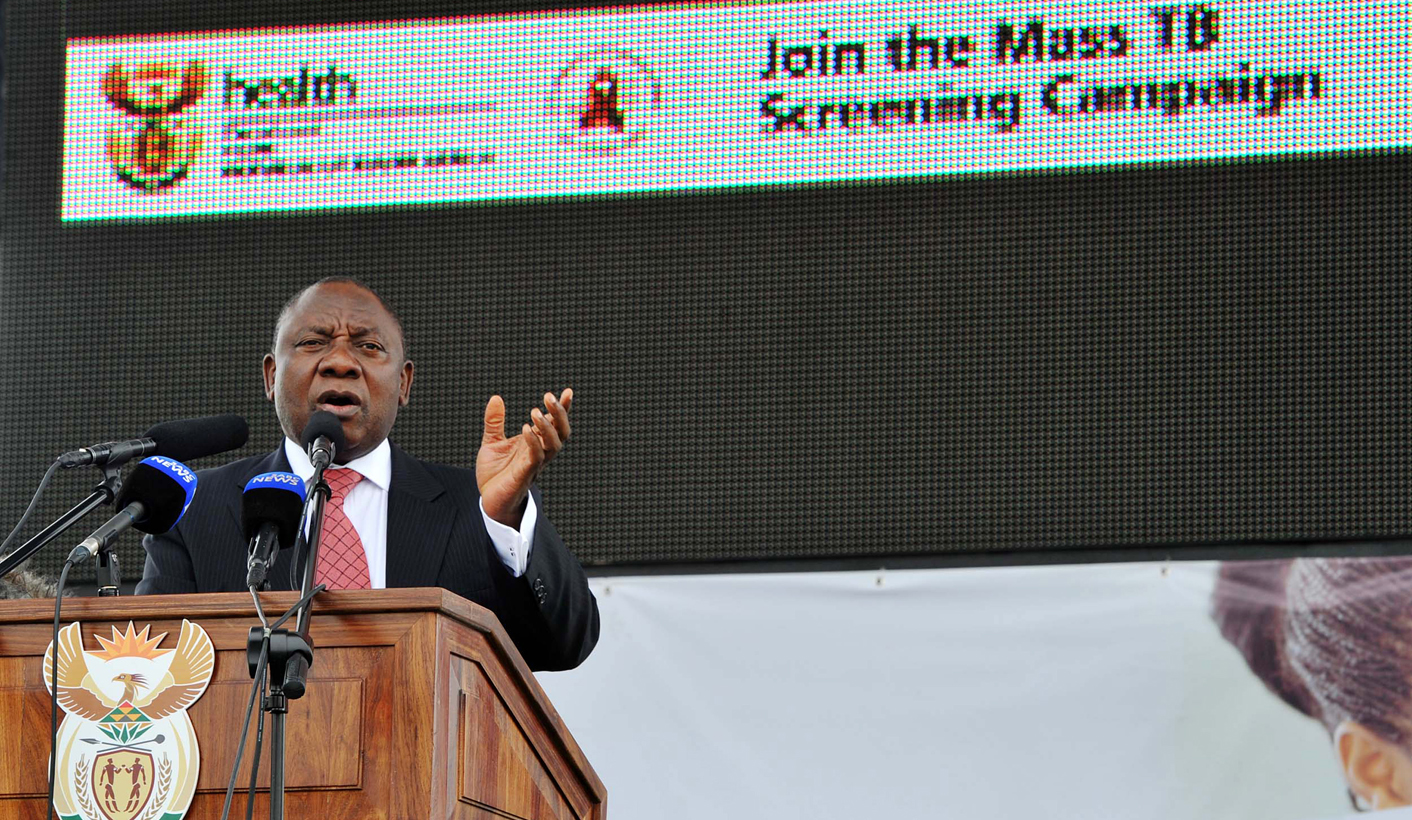 Deputy President Cyril Ramaphosa believes now is the time to combat SA's biggest killer, tuberculosis. The state is embarking on the largest screening campaign seen in South Africa and Ramaphosa, like activists and patients, wants to see the same efforts applied in fighting HIV/Aids. But the challenges are vast. By GREG NICOLSON.

Adaleeb Rinquest, 32 years old and from Cape Town, talks of TB in a timeline. In February 2011, she was sick, had been coughing and developed swollen glands under her arms. She was diagnosed with tuberculosis – “I don’t know how I came into contact with it” – and started treatment through the public health system. “One month went by, two months went by, and I actually got sicker by the day.”

She was hospitalised the first time that April. Back in hospital in May, after more tests, she was told she had drug-resistant TB (DR-TB). Her health continued to decline and she found out she had extensively drug-resistant TB (XDR-TB). There was no treatment available in the public health system and Rinquest, who watched patients die around her, was told she had a one-in-fifteen chance to live. She weighed 28 kilograms and had lost the ability to walk. In October, she went home to be with family, expecting to die.

But someone recommended she try UCT Private Academic Hospital. There she was given a two percent chance of living and was administered drugs through an IV drip. Her family raised R125,000 for the fees, paying R12,000 a month for medication for 24 months (she also had issues with her medical insurance provider, Discovery Health). Now, she’s free of XDR-TB and has recovered. “This is a disease that’s very prevalent in South African society. It could happen to anybody,” she says, adding that effective medicines like linezolid need to be made affordable.

Marking World TB Day on Tuesday, the government announced new plans to combat the country’s leading cause of death. While patients and activists have welcomed Health Minister Aaron Motsoaledi’s efforts, on TB and most health issues, they have called for the epidemic to be treated as an emergency that requires mass social mobilisation and integrated responses from different levels and departments of government.

In Klerksdorp on Tuesday, Deputy President Cyril Ramaphosa said everyone should know whether they have TB, as the state is embarking on the largest screening campaign seen in South Africa. He identified six mining areas, Lejweleputswa in the Free State, West Rand in Gauteng, Sekhukhune and Waterberg in Limpopo, and Bojanala and Dr Kenneth Kaunda in the North West, where screening will be prioritised. In these areas, the state wants to screen five million community members and 1.2 million children for TB. The campaign is set to last until 2017 and in the first year the plan is to screen 135,000 inmates in prisons and up to half a million mineworkers. Already the programme has screened 59,000 inmates, and in the six districts, 140,000 community members.

“With these interventions, we aim to achieve the World Health Organization’s 2025 annual targets by reducing TB incidence to less than 150,000 infections, compared to more than 400,000 currently,” said Ramaphosa. “We aim to reduce TB deaths to less than 20,000, compared to more than 120,000 currently.” The state also wants South Africans to learn the symptoms of TB and take measures to avoid infection. On drug-resistant TB, Ramaphosa said South Africa has seen the largest roll-out of the GeneXpert machine, which improves diagnosis, and there are 298 decentralised sites to address TB in local areas.

But civil society groups have said the response needs to go further to reflect the size and complexities of the epidemic. “Treatment and diagnostic tools alone are not a solution,” said Portia Serote, from the Treatment Action Campaign, at a press conference on Tuesday. “Yes, people will be diagnosed. Then what next?”

Using the aim to screen all inmates as an example, she asked: is there capacity to treat those who are found to have TB, is there space for hospitalisation, and how can those with TB be tracked while they move from remand, to trial, to prison or release? “We need an approach that is a bottom up approach, not the minister sitting up there and telling us what must be done,” said Serote.

Professor Bavesh Kana called on government to combine its efforts effectively. “It’s important that you have the right tools, but if the tools are not deployed effectively, they are as good as useless,” he said. “We’re calling for better stewardship, better stewardship of the entire process at the national level and better stewardship at the provincial and district level.” He said systemic changes needed to occur in the long term, as TB infects people where they live, travel and work; but for now the aim should be to interrupt transmission by reducing the amount of time that patients are infectious. This can be achieved by providing access to high-quality healthcare immediately and ensuring drugs are close to communities and in supply.

While Ramaphosa lauded the state’s efforts to provide 298 decentralised sites for TB care, the civil society organisations are calling for the state to rapidly decentralise care to 2,500 local primary healthcare clinics, as previously promised by Motsoaledi.

A former inmate Daily Maverick spoke to on Wednesday, who didn’t want his name mentioned as he fears the publicity might harm his parole, highlighted some of the potential problems with the eradication plan in prisons, where TB is often prevalent. After the inmate was arrested in 2005, he decided to get an HIV test while incarcerated. He never received his results, but went back a year later for another test. It wasn’t until 2011, he says, that he found out he was HIV positive. The prison was moving HIV positive patients to a specific area and he was also told to move. “What are you talking about?” he asked. He was told he had HIV, with no counselling or warning, years after he could have started on treatment.

One of his cellmates had TB, so when the inmate started coughing, he went to the hospital for a test. The first, the quicker AFB test, came back negative, but the second, a culture test which takes longer, was positive, and the inmate was admitted to the hospital section. He says the warders there were later reluctant to share further test results or help him with medication, and often failed to diagnose drug-resistant TB. “Some inmates are very ill and can’t take treatment on their own but the wardens in hospital just sit in their offices and do administration,” he says. “As far as taking care of the patients, only inmates are taking care of each other.” The services were not humane or adequate, he claims.

Sibongile Tshabalala is 39 years old and from Vosloorus. After being diagnosed with TB in 2004, she only got through her six-month treatment with the help of her family. She was hospitalised during her treatment as she couldn’t breathe, and the pills she was taking made her vomit. “People are still dying, are not as lucky as I am. Some people don’t have the support I got from my family. Some people don’t have families who will look after them. When you’re taking TB treatment you need that someone who will remind you to take you treatment… to encourage you to take your treatment. Because you know if you feel those side-effects, you will feel like, ‘You know what, this is useless because I’m dying anyway. Let me just die.’” Tshabalala, who is the chairperson of the Treatment Action Campaign in Gauteng, still feels vulnerable to infection because she is HIV positive, and when she rides in taxis she forces the other commuters to open windows.

While all these issues make combating TB an ongoing and difficult challenge, for patients who suffer from DR-TB and XDR-TB, like Adaleeb Rinquest did, just accessing treatment remains a problem. Medicines such as bedaquiline and linezolid, which can be life-saving, remain difficult to access or too expensive for most patients. DM