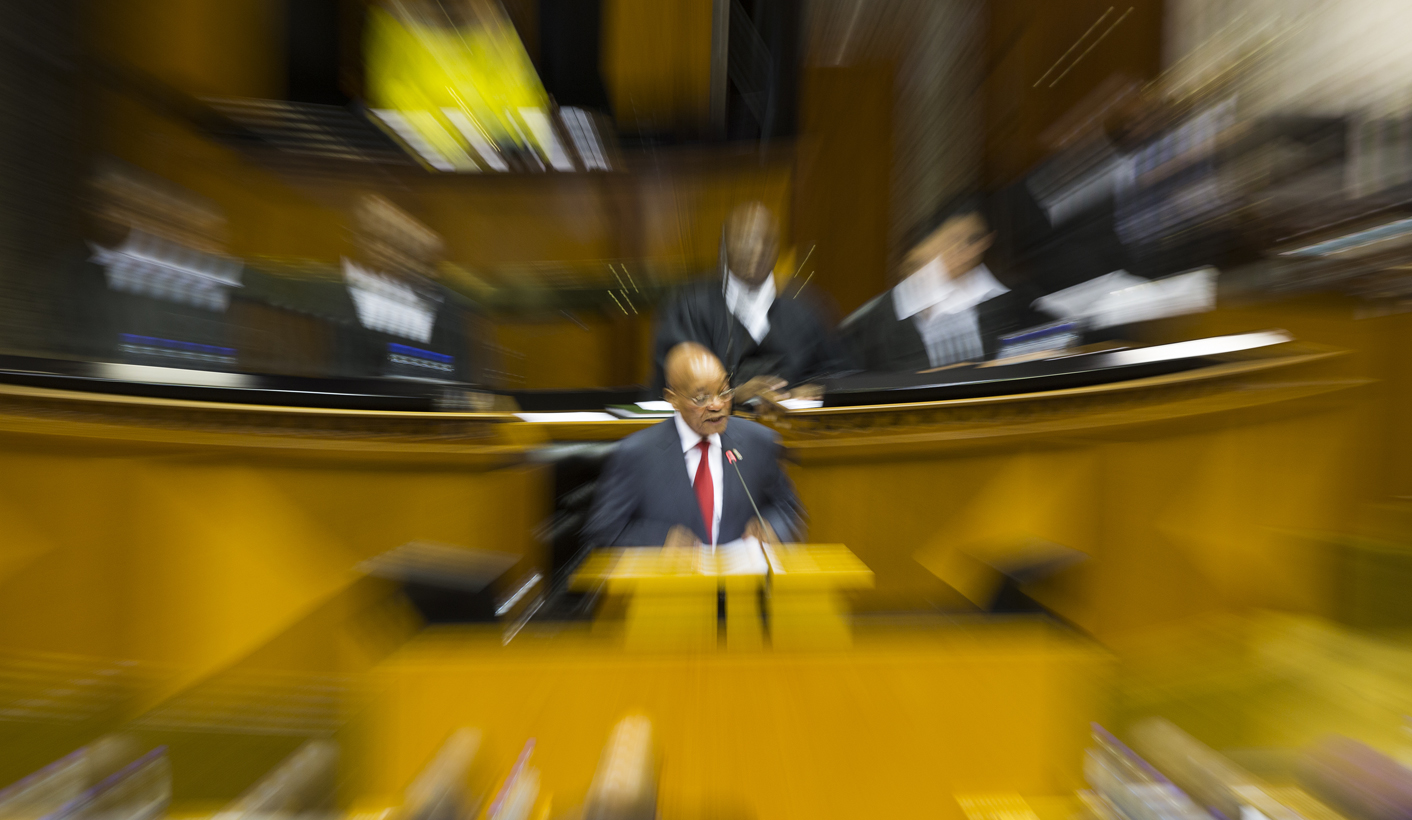 President Jacob Zuma’s government has done “a good job of stabilising the economy and investing in infrastructure to propel the economy into the next phase of growth, while investing in improving the quality of life of the most vulnerable”.

This is one of the central claims made by Jeff Radebe – the Minister in the Presidency responsible for planning, monitoring and evaluation – in a lengthy article defending the president’s performance. It followed an attempt by an opposition party to introduce a motion of no confidence against Zuma.

Radebe listed a number of achievements he attributed to the Zuma and the government. “This is not a political stunt,” he wrote, “this is no fiction; this is reality.”

Are his statements based on reality? Africa Check assessed them.

(Note: Radebe’s office failed to respond to several requests for the source material on which he based his claims. A government spokesperson, Phumla Williams, also ignored calls and text messages. We have evaluated the claims by drawing on publicly available data and information.)

The claim: “In 2014, more than 62% of South Africans made their democratic choice to choose a political party of their choice.”

This means that 21% of all South Africans, or 36% of all eligible voters, voted for the ANC. Sixty two percent of all valid votes cast were for the African National Congress.

The claim: “By the fourth quarter of 2014, GDP showed signs of recovery at a 4.1%. What is important, though, is that the real sectors of the economy, namely agriculture, mining, and manufacturing, were positive and actually grew.”

Our verdict: Yes, but…

Radebe is right on the numbers, but the financial quarter he chose to highlight paints a much brighter economic picture than is actually the case.

The deputy governor of the South African Reserve Bank, Francois Groepe, made the distinction in a recent address: “Although the South African economy expanded at a brisk annualised rate of 4.1% in the final quarter of 2014, growth for the full year was a disappointing 1.5% and represents the second-lowest growth rate recorded over the past sixteen years.”

If you look at 2014 as a whole, the mining sector actually contracted by 1.6%, while the manufacturing industry showed no growth. Agriculture did increase by 5.6% percent.

The claim: “Whilst jobs were lost [due to the recession], in 2014 South Africa has actually managed to employ even more people than were employed in the years when jobs were lost, implying that there is recovery.”

Our verdict: Yes, but…

Radebe’s claim only deals with absolute labour statistics, that is, the actual number of people employed. In the fourth quarter of 2008 there were approximately 14.7-million people employed in the South African economy. By the third quarter of 2010 1.1-million jobs had been lost.

Since then employment has increased. The most recent employment statistics show that 15.3-million people were employed in the fourth quarter of 2014.

However, Radebe’s claim is misleading in that the unemployment rate has not recovered to pre-recession levels. Ratios are a better measure than absolute figures, the executive manager of labour statistics at Stats SA, Peter Buwembo, has told Africa Check.

The claim: “Under the stewardship of President Zuma, South Africa has one of the largest renewable energy programmes ranked among the top 10 in the world.”

According to Kadri Nassiep, CEO of the state-owned South African National Energy Development Institute, “countries such as China, US and Germany still lead the way in total installed capacity”.

He added that South Africa falls in the top 5 countries when the size of its renewable energy investment is compared to GDP. Uruguay, Mauritius and Costa Rica topped this ranking in the 2014 Global Status Report, compiled by international renewable network REN21.

The claim: “The percentage of households connected to the electricity mains increased from 82% to 85%.”

The 2013 General Household Survey reported that the percentage of households connect to electricity mains increased from 82.7% in 2009 to 85.4% in 2013. The statistics for 2014 will be released around the middle of this year.

Claim: “The percentage of households connected to piped water increased from 88% to 90%.”

The 2013 General Household Survey revealed that 89.9% of households had access to piped water, up from 89% when Zuma took office. Just over 4% of households had to fetch water from rivers, streams, stagnant water pools and dams, wells and springs.

But this one statistic does not provide the full picture about access to water in South Africa. In 2013 a quarter of households reported interruptions to their water supply that lasted more than 2 days at a time or lasted more than 15 days in total.

The claim: “The percentage of households with access to RDP standard sanitation increased from 70% to 78%.”

Four percent of households reported that they did not have access to sanitation of any kind. The survey noted that “the percentage of households that continued to live without proper sanitation facilities had been declining consistently between 2002 and 2013”.

“The claim doesn’t say anything about the condition of the toilet or the experience of using it or whether the toilet is functional and clean,” she said.

The claim: “The percentage of persons aged 20 years and above with no formal education or highest level of education less than Grade 7 within each gender group decreased from 19.3% to 16.2%.”

The 2013 General Household Survey reported that the percentage of people aged 20 years and older who had no education, or had completed some primary school below grade 7, had decreased from 19.3% in 2009 to 16.2% in 2013.

The claim: “South Africans now live nine years longer than they did in 2005 due to the roll-out by this government of drugs that prolong life.”

Deputy executive director at the Wits Reproductive Health and HIV Institute, Francois Venter, told Africa Check that the general consensus was that life expectancy in South Africa had been driven up by the rollout of antiretroviral therapy.

“If you stop someone from dying in their 20s, 30s and 40s with ARVs, you bump up the average age at death significantly,” he said.

“It is possible other things contributed – fresh water, less under-nutrition, expanded vaccine programmes – but that doesn’t cause such a dramatic change.”

The National Student Financial Aid Scheme’s annual reports show that they provided funding worth R2.5-billion in 2008/09.

A spokesman for the National Student Financial Aid Scheme, Kagisho Mamabolo, told Africa Check that R9.2-billion worth of funding was provided in 2014. However, this excluded an additional R1-billion which was provided by the Department of Higher Education and Training to cover funding shortfalls in 2013 and 2014.

The scheme provides funding to students that qualify according to a financial means test. Students are required to start repaying their loans once they start earning a salary of R30,000 or more per year, at an initial rate of 3% of their annual salary.

Both students and universities have raised concerns that there is not enough funding to assist financially needy students. Earlier this year Wits University’s Student Representative Council was reported to have raised R2-million to assist students that did not receive funding from the scheme.

The claim: “South Africans benefit from a cocktail of social assistance programmes and services that alleviate poverty and indeed poverty has visibly been reduced since 2000.”

Research by the Southern Africa Labour and Development Research Unit at the University of Cape Town, among others, showed that poverty as measured by income declined slightly between 1993 and 2012.

To a large degree, the decline could be attributed to state spending on social grants, said Lauren Royston, director of research and capacity at the Socio-Economic Rights Institute (SERI).

Another tool whereby poverty can be measured showed an even greater reduction over this period. The Multidimensional Poverty Index (MPI) takes into account more than income. It scores nine factors, such as school enrolment, nutritional levels and access to basic services that include electricity, sanitation and water.

However, the index suffers from two limitations, former SERI researcherMichael Clark pointed out. First, it relies heavily on government statistics. The index also does not measure the quality of basic services.

Despite the decrease achieved, Royston said South Africans must be mindful that poverty remains deep and widespread and that inequality has increased.

This claim is a bit nonsensical as it neither proves nor confirms anything, said the head of Wits University’s School of Economic and Business Sciences, Professor Jannie Rossouw. “One, we are compelled to pay taxes and two, to judge the budget in nominal terms doesn’t tell us much.”

There is a cause for concern when state expenditure grows faster than the economy, said Rossouw, as he has pointed out as co-author of a journal article before. However, state expenditure slowed in the fourth quarter of last year, giving some credence to the state’s promise to curb spending. DM

This story was first published by Africa Check.