Analysis: The crisis at Eskom, a dry run for South Africa itself 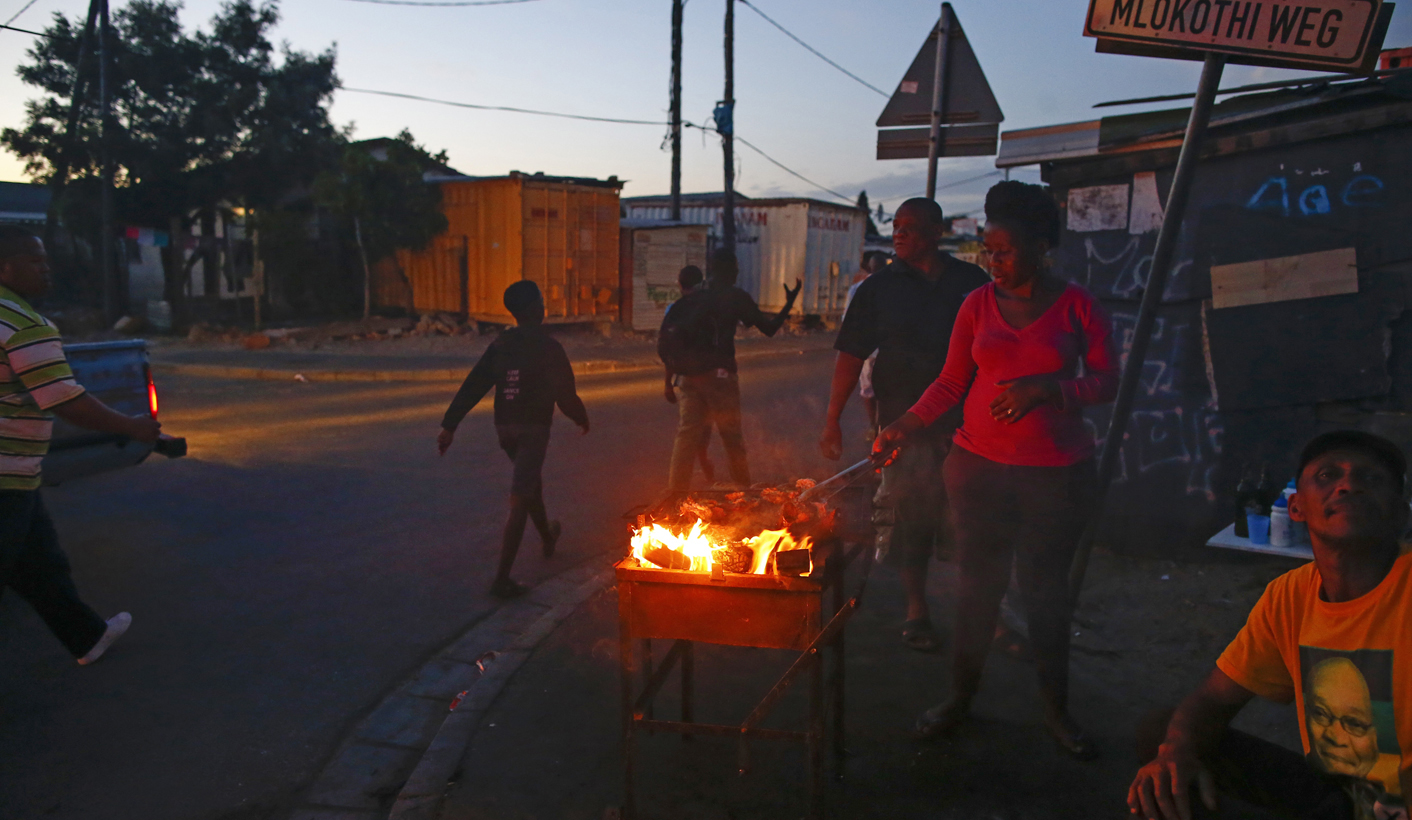 Eskom’s size, its monopoly and its central importance to our economy and broader society suggest that a useful comparison would be with our government itself. How Eskom’s crisis plays out provides a forecasting tool for South Africa’s own fate. By DIRK DE VOS.

The many and apparently never-ending problems at South Africa’s State Owned Enterprises (SoEs) provide fuel to the well-worn arguments that they should simply be privatised and sold off. They appear, as a group, to be in a permanent state of dysfunction and share many similar problems. Perhaps, then, what ails them all could be solved in the same way. The counter-arguments, informed by the belief that the state must play a leading role in the economy, hold that these entities are critical to something called the developmental state and perhaps something else, more ambitious, known as the National Democratic Revolution, should come into play.

While there are interesting parallels between Eskom and other SoEs, we need to understand that Eskom stands alone from the rest in two very important respects. Firstly, Eskom dwarfs the other SoEs in size. Consider this: the proposed full re-capitalisation of SAA will require R6.5 billion. That is less than the outstanding R8 billion electricity bill that Soweto residents owe Eskom. Eskom’s sheer size sets it apart. Secondly, Eskom, a total monopoly, represents almost entirely our national electricity system. By definition, we could not function as a recognisable society without electricity, and therefore without Eskom.

Its size, its monopoly and its central importance to our economy and broader society suggest instead that a more useful comparison would be with our government itself. How Eskom’s crisis plays out provides a forecasting tool for South Africa’s own fate.

Finance Minister Nhlanhla Nene’s first full budget presentation in February this year will be remembered for its increases in various taxes. Further increases in different types of taxes are likely after The Davis Tax Committee presents its findings and recommendations. These increases have been widely expected. The reasons are clear – our government’s growth in expenditure is more than the growth of the underlying economy. Minister Nene also made a call to halt spiralling government expenditure. Typically, there were those that criticised this budget as an inappropriate austerity budget, others who decried the tax increases as a further break on economic growth. We are even seeing the comeback of an economic concept last spoken about in the 1980s, namely the Laffer Curve, which shows that there is only so much tax that can be extracted from an economy. Increases in tax rates beyond a point serve to decrease the total amount of tax collected. Discussions about an incipient tax revolt by taxpayers are now front page news.

Conventional Keynesian theory holds that government should step in and spend during an economic slow-down and that is exactly what the South African government, along with most other governments in the world, has done, aided by an extended historically low interest rate environment. But it can’t go on forever. While South Africa’s government has aspirations for being a developmental state, it is very far from being one. We are an importing economy, not an exporting one. Our focus has long been on consumption and not production. This much is clear from an outstanding analysis done by one of the Mbeki government’s economic advisors, Ricardo Hausman.

The result of all this is that South African government is now increasingly indebted. How much debt a country can handle is another debate. Famously, an economics paper produced by academics Carmen Reinhardt and Kenneth Rogoff in 2010 used a statistical analysis to show government debt in the US should be kept below 90% of GDP if economic growth was not to be permanently harmed. Their analysis was later shown to be unreliable, but all that is hardly relevant to South Africa. While rich and developed countries appear to be able to borrow and manage seemingly endless amounts of debt, our creditors are significantly charier about lending our government the money needed to bridge deficits.

Becoming more indebted is not so much the problem as much as the cost or interest demanded on that debt. The cost of debt is a function of our creditworthiness as reflected in the scores provided by debt rating agencies. As South Africa’s government took on more debt from 27.8% of GDP in 2008/09 to a projected 48% by next year, our creditworthiness has declined. While we are still in investment grade territory, our declining credit status is a limit on further borrowing, especially when borrowing supports expenditure that is directed at consumption spending and not investment. We spend 10%, or nearly R115 billion, of our government’s budget to pay off our existing debt, about two-thirds the amount paid to all South Africa’s 17 million odd social grant beneficiaries. If we don’t turn the situation around, South Africa will fall over its fiscal cliff.

Eskom finances are now in a far worse state than South Africa’s. There was a time recently when Eskom had a better credit rating than government’s sovereign debt. No more. Eskom’s long-term debt has ballooned in recent times, and is fast approaching R300 billion, an amount equal to 18% of total government indebtedness. It is not clear whether this provides for the R160 billion still needed to get our grid up to standard. Once again, debt in of itself is not the real problem. It could be argued that a utility like Eskom should be using debt to finance its activities. It is, however, a problem when creditors call into question the ability to repay them. Debt-servicing costs, according to Eskom’s annual reports, have doubled from R4.2 billion in 2008-2009 to over R9 billion in 2013-14. Last week, rating agency Standard & Poor’s downgraded Eskom debt to junk status. This will immediately increase the interest payable on existing debt and, coincidentally, on the same day as the S&P downgrade, Eskom announced that it was seeking a 25% tariff hike. Eskom is confronted with its own fiscal cliff. Using the analogy, Eskom needs to extract more money from its customers. Not the relatively gentle increments required of us by Minister Nene, but a very steep increment.

What remains to be seen is South Africa’s electricity ‘Laffer Curve’ equivalent. It is the great imponderable. The more one charges for a unit of electricity, the less electricity is used. Already Eskom is reporting lower sales, and in an economy with one of the highest energy intensities, it is tough to work out immediate, medium and long term price elasticity for electricity. Most analysis, including the government’s planning document, the Integrated Resource Plan 2010-2030, and analyses such as the recent effort by the IRR – which predicts a massive 18,000 MW shortfall – take the view that increased demand for electricity is an almost straight line function of economic growth. They are almost certainly wrong. Demand for electricity is mostly a function of its price.

The suspensions of Eskom’s management certainly played a role in S&P’s ratings downgrade, but Eskom’s performance as a utility has been terrible on all fronts. The Medupi, Kusile and Igula builds have been disastrous. It is estimated that Medupi and Kusile will deliver electricity to the grid at a price 20% higher than the highest price being offered to privately funded coal-fired power producers. So, too, the maintenance of existing plants, and with it decimation of the generating reserve margins. The coal purchasing or primary energy procurement function is obviously not working. In the meantime, Eskom’s staff complement and their remuneration has grown out of all proportion. Even since 2008, when the first bout of load shedding hit South Africa, Eskom has grown its employee numbers an average of 23% to almost 47,000 people with an average wage of R623,000 per annum.

Government has been doing the same. From 2005 to 2012, the government’s salary bill grew by 146%, and since 2008, government salary payments have increased by more than 80%. Research shows that the public sector also pays over 25% more than the private sector. It is not apparent that the rest of us are getting value for money. Large swathes of our public service produce very poor outcomes and are a substantial drag on South Africa’s competitiveness.

On the face of it, South Africa looks to be running three separate social welfare systems. The first one we all know about, but there are also the welfare systems hidden in the salary payments to a large part of the public service and Eskom’s employees.

The problem Eskom confronts is this: There is so much wrong with it that needs to be fixed but, in the terminology of venture capital, it is running out of runway. One of its essential requirements, access to cheap debt funding, is in the process of being kicked away by the credit downgrades. As such, the scope for solutions that are politically palatable to its owners has narrowed down considerably. Our government could step in and extend its guarantees, but that would have the effect of adding Eskom’s debt into its own balance sheet. The impact of adding another R300 billion to our existing debt could well prompt an alarming response by the same credit agencies. As anybody deep in debt knows, your creditors get to call the shots. Even though all Eskom’s equity is owned by the government, with a debt/equity ratio of over 2, it could be said that Eskom is already two-thirds privatised already. It is worthwhile noting that S&P’s downgrading decision was accompanied by the reason that the “shock suspension of the utility’s CEO and three other senior executives has led us to have less confidence in the company’s corporate governance arrangements”. That looks very much like a reason falling within the domain of a shareholder.

Critics of the Mbeki government’s GEAR policies, derided by the SACP as the “1996 class project”, held that it followed conservative or neo-liberal economic policies favouring balanced budgets, and did so at the expense of the poor. The dynamic has changed since then, but as countries like Brazil are fast finding out, you can’t succeed public spending your way into a new economic paradigm using borrowed money. Rather do what needs to be done to preserve this precious sovereignty.

A lot of things are going to have to change at Eskom, and it will be rough ride. The first order of business for Deputy President Ramaphosa’s electricity sector advisors ought to be clear financial reporting down to individual plant level. We need to know what is going on, and so do the credit rating agencies. We know, too, that part of the solution is that Eskom’s salary overhead will need to be slimmed right down without losing critical skills.

It a pity that the necessary changes spelled out in the 1998 White Paper on energy were never carried out, and now change is forced on Eskom from the outside. There is a salutary lesson here for South Africa. As Eskom goes, so goes the nation? DM