During violent protests, Maboneng is a symbol and a scapegoat 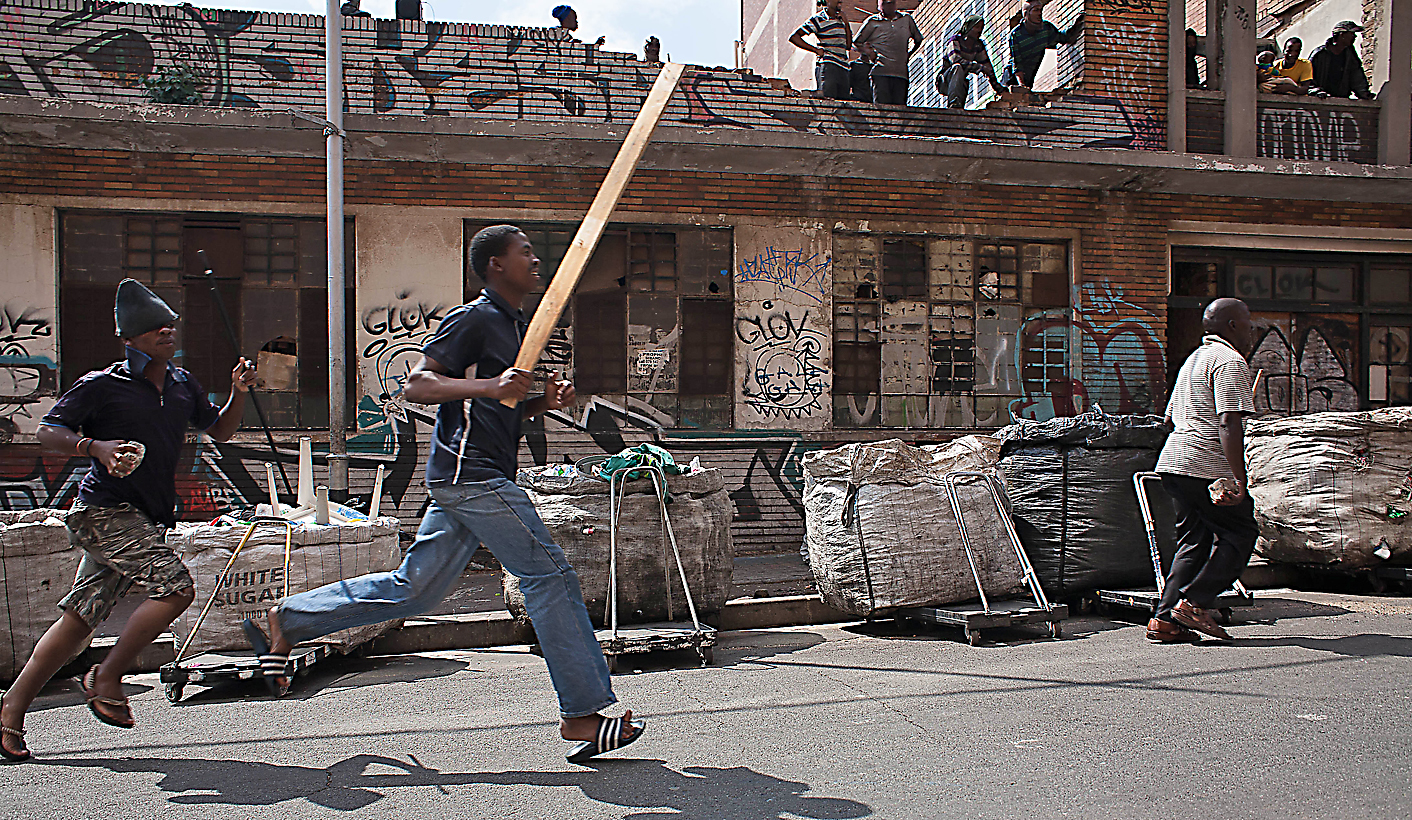 The inner-city precinct of Maboneng has been controversial, but it seems it is not to blame for protests that started in Jeppestown on Wednesday due to widespread fears of eviction. The tension has been fuelled by local inequality, but the spark has come from other property developers and a municipal system that regularly sidelines the poor on its path to regeneration. By GREG NICOLSON.

Last Thursday night, police circled the corner of Maritzburg and Main Streets. A man shot his wife inside Crest House, said onlookers. A few days later, a resident said there was another shooting in the building. Walk 100 metres to Maboneng’s Main Street Life and such violence is unthinkable. There, fury is represented through art. A different class, just a block away, is guarded by security on every corner.

The residents I know at Maboneng aren’t wealthy. Many are in creative professions, have creative eccentricities, or are young professionals looking for an alternative to suburban Johannesburg. But none are poor and the precinct, its restaurants and bars, attracting so many people looking for a party, is like a diamond dropped in the mud of city’s decay. The informal settlements and rich suburbs might be the epitome of South Africa’s inequality problem, but rarely do different lifestyles rub so close and so jarringly as in Maboneng and Jeppe.

Perhaps that’s why Maboneng was blamed this week for the Jeppe eviction notices. Residents around Jeppe Park on Wednesday protested against eviction orders issued to buildings in the area and many directly blamed the precinct. It’s a symbol of so much in Johannesburg – a new class of professionals and creatives, inequality in close confines, safety in the city, investment in run-down areas, and a self-appointed cultural elite.

But Maboneng is not to blame.

Wednesday’s protests resulted in running skirmishes with the police, while most local businesses closed operations. On Thursday, residents picketed the police station demanding the release of the 21 people arrested. Eventually the charges against the protesters were dropped.

Photo: A woman who was arrested during the protests in Jeppe on Wednesday is released from the local police station in tears. (Greg Nicolson)

“Why are they chasing us where we are staying?” Ntuthuko Shelembe, 24, asked, waiting at the police station.

“Maboneng has got too much money there,” interrupted Vonkey Mbatha, 29. “He came to disturb us. We don’t need him anymore because we don’t know where he comes from. He came here to rob us.”

Yet, as with many evictions, it’s difficult to understand what’s going on.

Jonothan Liebmann, CEO of Propertuity, which is behind the Maboneng developments, has outright said the group is not involved in either buying or evicting people from the Jeppe buildings, and has also said new developments must help find accommodation for existing residents. Maboneng may be controversial, but there’s no evidence it is linked to the evictions. The buildings where evictions are set to take place seem unlikely to be associated with the group because of their distance from the existing precinct and proximity to the local men’s hostel, overcrowded and dilapidated.

Photo: After the protesters were released from the local police station on Thursday, young men sprinted through the streets looting from informal traders and running into any store that had not closed its doors. (Greg Nicolson)

Who, then, is antagonising Jeppe residents? An eviction notice from the South Gauteng High Court on a building in the area, seen by Daily Maverick on Wednesday, showed EGC Properties CC as the applicant with residents and the City of Johannesburg as the respondents.

According to the City, which held a meeting on Thursday with community leaders and police after the protests erupted, there are three private companies trying to evict tenants on three different properties. The numbers however seem to differ, with some community members saying eight buildings have received eviction notices.

Amongst the confusion, livelihoods are at risk. Since 2000, Thobile Zondo, 34, has lived in one of the buildings locals say is due for eviction. The building used to be a car repair garage which Zondo says was taken over by the residents when the owner wasn’t able to pay employees. Now, rooms have been erected throughout the property and Zondo says residents pay water and electricity rates to the city but no rent. They received an eviction notice in 2011, but after protesting to the City of Johannesburg no eviction took place. “I’m very, very, very upset because I can’t go nowhere,” Zondo said in her small, single room. She lives there with her husband and four-year-old daughter. Zondo is unemployed but Jeppe is central to the city and convenient for her needs.

Photo: The hallway in Zondo’s building where apartments have been built inside a former motor mechanic shop. Residents say the building received an eviction notice. (Greg Nicolson)

It’s hardly a surprise Maboneng has been blamed for the potential evictions. Critics have linked the issue back to the City’s failure to focus on inclusive development. Edmund Elias, an informal trader from the South African National Traders Retail Alliance, who was prominent in resisting the municipality’s “Operation Clean Sweep”, where informal traders were forcefully removed from the streets, Tweeted on Wednesday that the city was “trying to turn Maboneng into a white-owned penthouse enclave at the expense of the poor” as we are seeing “forced removals again as elite take control and brand [the] poor illegal”.

As different classes in the area rub up against each other, Jeppe residents claim not to have benefited from jobs in the area, which is run down and said to have high levels of crime; Maboneng is an obvious target.

Johannesburg is going through a modicum of revitalisation and evictions abound. They pose a threat to those who will soon find themselves homeless if negotiations and interventions don’t take place. But in this case, there’s also a threat that Maboneng, or anyone seen to associate with Maboneng or on-the-ground development in the area (and there are a number of positive initiatives taking place), will be put at risk for the actions of property companies like EGC Properties. While Maboneng and other groups have managed to operate in the area for years, albeit with some tension, the recent protests sparked by hasty property owners has led to violence and threats.

Maboneng’s impact is and has been debated, but those behind these evictions need to be identified and held accountable. Meanwhile, the City needs to take responsibility for its marginalised residents, provide low-cost inner-city housing, and while embracing development, ensure that it is inclusive and beneficial for all parties involved. Any other way and what is a relatively contained protest could soon mushroom into another existential problem for Johannesburg. DM

Main photo: Jeppe residents run through the streets with sticks and bricks past a central point for local scrap recyclers. (Greg Nicolson)