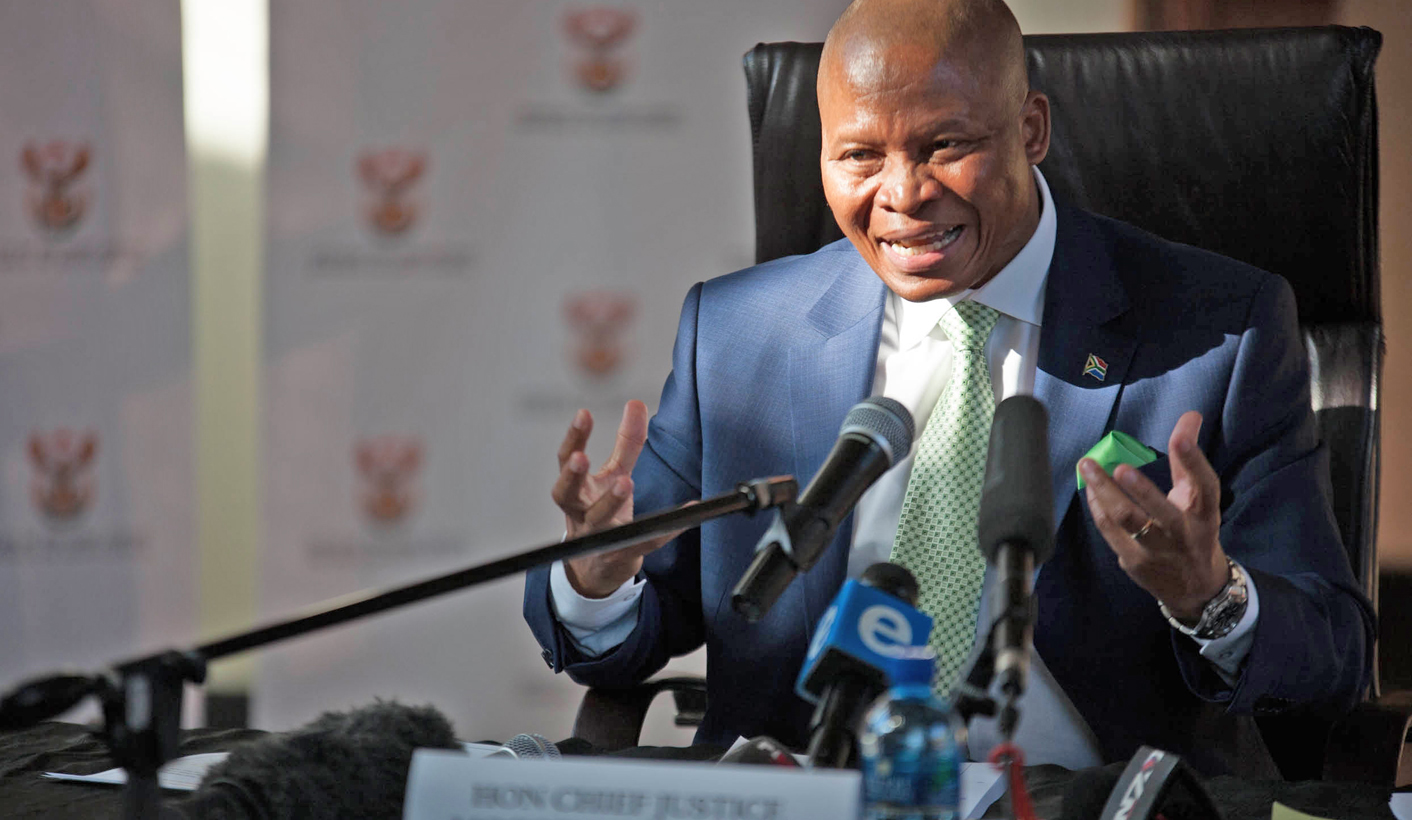 Earlier this month, lawyers for the Institute for Accountability in Southern Africa wrote to Chief Justice Mogoeng Mogoeng highlighting the fact that the ongoing failure to fill a vacancy at the highest court of the land was unconstitutional. On Wednesday the JSC announced it would take urgent steps towards appointing a new judge by June. While this might remedy one issue, there is further disquiet about the unprecedented high number of acting judges currently serving the court. By MARIANNE THAMM.

On 6 March, lawyers acting on behalf of the Institute For Accountability in Southern Africa (IFAISA), an NPO, sent a letter to Chief Justice Mogoeng Mogoeng, in his capacity as Chairperson of the Judicial Service Commission (JSC), expressing concern that a vacancy at the Constitutional Court had gone unadvertised and unfilled over a year after the retirement of Judge Thembile Skweyiya in May 2014.

The JSC is obliged, wrote the IFAISA lawyers, to advertise the post and fill it, and a failure to do so could be regarded as unconstitutional and would compel the organisation to approach the courts in an attempt to force the JSC to take action. The deadline for the JSC to respond to the correspondence was 13 March. A silence followed until Wednesday afternoon, when the JSC Secretariat informed IFAISA’s lawyers that urgent steps would be taken to advertise and fill the vacancy by June.

Sello Chiloane, of the JSC Secretariat, explained to Daily Maverick that the late reply was due to technical issues with emails and that the Chief Justice had already announced in public that an appointment would be made in June.

In a letter to IFAISA’s lawyers Chiloane explained, “The Chief Justice, in his capacity as Head of the Constitutional Court, has already indicated to the secretariat of the Judicial Service Commission that the vacancy at the Constitutional Court will be filled by June 2015. The details regarding a special sitting will be discussed at the April 2015 sitting due to take place from 13-17 April 2015.”

At present there are four acting judges who have been appointed to the Constitutional Court – an unprecedented number. While the bulk of acting appointments have been made to accommodate the unusual situation that three of the Court’s judges, Justices Chris Jafta, Ray Zondo and Johann van der Westuizen, have all taken long leave at the same time, it was the fourth acting appointment that raised concerns in legal circles. This was a vacancy that had not been unexpected and that had not arisen out of “unavoidable practical necessity”, but came about as a result of the retirement of Judge Skweyiya, as well as the JSC’s failure to act with regard to advertising the post.

Chief Justice Mogoeng, during his farewell speech to Justice Skweyiya in May 2014, had already clearly indicated that he would prefer a woman to be appointed to the position in an attempt at gaining greater gender parity at the Constitutional Court, which is the least representative in the country. Only two out of the 11 judges are women.

“My preference would be to have a woman appointed, but even if 20 women apply, if they are not competent, we will not recommend anyone for appointment. You can criticise all you want,” the Chief Justice said.

The Chief Justice added that “we will take some time” to advertise the post and that this would be in order to “give us room to create a pool of possible candidates additional to those who would apply anyway, even if they had not acted in the Constitutional Court”.

Leo Boonzaier, an editor for the African Legal Centre and former law clerk to Justice Edwin Cameron, said that while acting judges have always been appointed to the Court, and that the Constitution and the Constitutional Court recognised this as permissible, the high number – four – was unprecedented and “increased the magnitude of the problems significantly”.

“As a crude measure, the acting judges are almost sufficient, by themselves, to form a majority, capable of deciding a case; they need only two permanent members to agree with them,” Boonzaier explained.

There are eleven Constitutional Court Judges appointed by the president from a list drawn up by the JSC – a 23-member body consisting of the Chief Justice, the President of the Supreme Court, a Judge President designated by the Judges President, the Minister of Justice and Constitutional Development, two practicing advocates, two practicing attorneys, one teacher of law, six MPs (three from opposition parties), four members of the NCOP, and four members designated by the president after consultation with the leaders of all parties in the National Assembly.

Matters in the Constitutional Court should be heard by at least eight judges, which is why the high number of acting judges was a matter of concern.

There is no doubt that a woman should be appointed to the position but, said Boonzaier, this was no justification for delaying a permanent appointment.

“First, there are many superbly qualified women candidates available. Several of them, including Judges Mandisa Maya, Nonkosi Mhlantla and Nambitha Dambuza, have already acted in the Constitutional Court. Judge Maya is the stand-out there, and it is a great shame she was not appointed in the past. And the country’s most senior woman judge, who inexplicably has never been invited to act on the Constitutional Court, Judge Carole Lewis of the Supreme Court of Appeal, would make an excellent appointment, to a Court that would benefit from her expertise in private law. Especially against this backdrop, the insinuation that the JSC needs almost a year to find suitable woman candidates is patronising, perhaps offensive.”

The current crop of acting judges have all been appointed by President Zuma on recommendation by the Minister of Justice, Michael Masutha, acting in concurrence with the Chief Justice. These deliberations are private and no one else is involved in the selection of candidates.

In effect, says Boonzaier, the Minister of Justice may make party-political selections by decree, or the Chief Justice might insist on appointments he might expect to be allies in the court. While this might not be the reality of the matter, the lack of transparency threatens the independence of the highest court of the land.

While the acting Con Court judges would have been screened by the JSC when they were first appointed as judges, section 174(4) of the Constitution indicates that process is not sufficient and makes provision for those seeking the “jewel in the legal crown” – a position as a judge in the country’s highest court – to be specially tested.

“This means a significant number of the judges on our highest Court this term have not been vetted by the rigorous, inclusive, public process that the Constitution envisages,” said Boonziaer, a situation that at least leads to a blurring of the powers of separation between the Executive and the Judiciary.

Boonzaier added that acting judges were likely to be mindful of the fact that their judgments and voting patterns might be scrutinised by the “powers that be” with a view to their permanent appointment.

“This might mean the judge is tempted to decide cases in a way that is pleasing to the Executive, rather than bringing an independent judgment to bear. Or, at least, the public might perceive the judge to be less independent than a permanent appointment – and that perception is a bad thing, in itself, for the administration of justice,” he said.

While acting judges did enjoy security of tenure in other courts and cannot be “ousted from the judiciary altogether” for giving politically inconvenient judgments “the real problem is not the stick of impeachment, but the carrot of appointment” to the Constitutional Court, which reflects “a considerable promotion”.

It is highly unlikely that the Chief Justice is unaware of these crucial issues, and he in fact recently said as much in his November 2014 judgment in the Helen Suzman Foundation Constitutional challenge to Section 16 and Chapter 6A of the South African Police Service Act, 1995, governing the establishment and operation of the Directorate of Priority Crime Investigation – the Hawks. The Foundation argued that the Act failed to secure an adequate degree of structural and operational independence for the Hawks.

In that instance the Chief Justice found that “No holder of [a] position of high responsibility should be exposed to the temptation to ‘behave’ herself in anticipation of renewal’” which would hold also in relation to an acting judge.

Meanwhile, on 5 March the JSC made available the list of shortlisted candidates for judicial positions. Of the 23 nominations, only four are women. They are Western Cape High Court Judges Shehnaz Meer, who has been nominated as Judge President of the Land Claims Court; and Nambitha Dambuza, who is one of seven candidates for two vacancies at the Supreme Court of Appeal.

Pretoria High Court Judge Thokozile Mapisa is one of seven candidates nominated for the position of Judge President of the Limpopo High Court, while Eastern Cape advocate Wabo Msizi is one of the nominees for two vacancies in Eastern Cape Division of the High Court in Bhisho and Grahamstown.

Shortlisted candidates will face gruelling interviews at a JSC sitting in Cape Town from 13 to 17 April, where a special sitting to discuss the details of the Constitutional Court vacancy will also take place. DM