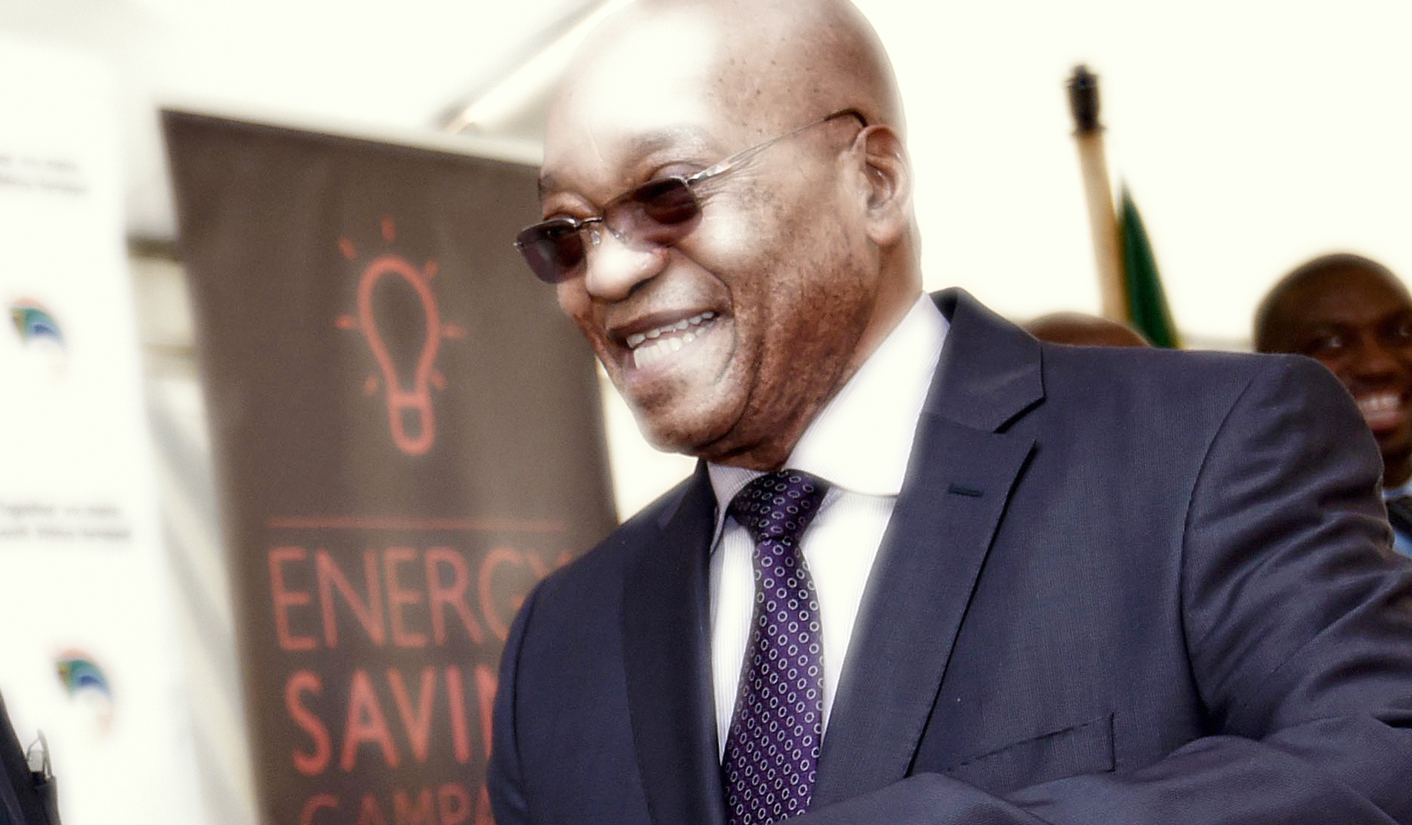 Tuesday’s motion of no confidence in President Jacob Zuma was not the first that he has easily weathered. The first was as far back as 2010, while an attempt by opposition parties to bring a second in late 2012 came to naught. Tuesday’s motion was batted away by dint of superior ANC voting numbers in the National Assembly. The ruling party called the debate a time-waster, while opposition parties hang on to the idea that everything could be different if MPs were only allowed to vote in secret. By REBECCA DAVIS.

In March 2010, a vote of no confidence in President Jacob Zuma was defeated by 241 votes to 84, with eight abstentions. Erstwhile Cope parliamentary leader Mvume Dandala, who told the National Assembly, “The President has let us down”, proposed the motion of no confidence.

Zuma had at that stage been in office for only 10 months. Beyond the rape and corruption charges that foreshadowed his ascent to the presidency, what had he done by then to warrant such a dramatic motion?

From the gloomy vantage point of 2015, his 2010 charge sheet seems almost laughably light. He had recently confessed to fathering a child out of wedlock with the daughter of friend Irvin Khoza. He had not declared his financial interests within the appropriate timeframes.

“The public have been extremely patient, but they are tired of hearing your regular apologies,” Independent Democrats (ID) leader Patricia de Lille (now mayor of Cape Town) told the National Assembly during the March 2010 no confidence debate. “There are many in the ANC who agree with us in private, but are too afraid to stand up for the Constitution.”

Five years later, the idea of “regular apologies” from Zuma seems almost unthinkable. But one thing hasn’t changed: the conviction on the part of opposition parties that the ANC ranks are secretly stacked with individuals who want to see Zuma gone.

It was this belief that led Agang, in November last year, to table a motion of no confidence in Zuma again. Papers were filed with the Constitutional Court requesting the motion be voted on by way of a secret ballot. Without fear of recriminations, the theory goes, ANC MPs would be freed to vote against the president.

“[ANC] MPs are scared if they vote against Zuma they might be hungry in the future,” Agang’s Andries Tlouamma claimed to the National Assembly on Tuesday. The FF+’s Pieter Groenewald suggested, similarly, that if the no confidence vote was secret, the ANC would get a shock.

United Democratic Movement (UDM) leader Bantu Holomisa addressed the ANC MPs directly: “You know very well as you sit there that you have a problem with this man but because he keeps giving you positions you don’t want to speak out. We are speaking on your behalf.”

Whether this perception on the part of opposition parties is accurate or not is a moot point for the time being. As it stands, the only vote conducted in secret is to elect the President. Agang’s Constitutional Court application is only due to be heard in May, but the courts have revealed themselves to have little appetite for interfering in the workings of Parliament.

Tuesday’s vote went ahead in the normal manner in the end, and it was dismissed with ease: 223 ‘no’ votes, 113 ‘yes’, and eight abstentions. It was a tighter margin than that of the 2010 no confidence vote, but this reflects the shifting demographics of the National Assembly. As the DA’s Mmusi Maimane pointed out in his speech, under Zuma’s leadership the ANC has shed 210 000 votes countrywide since 2009.

There was one notable difference between 2010’s debate and the one that took place on Tuesday, however. In 2010, ANC MPs participating in the debate felt able to lead arguments relating specifically to Jacob Zuma’s positive performance in office – perhaps because an Ipsos Markinor survey at the beginning of that year had found that Zuma had public approval ratings of 77%, the highest for a President since May 2006.

In that 2010 debate, Cabinet veteran Jeff Radebe listed examples of Zuma’s achievements in office thus far. The president had facilitated the end to the Burundian conflict, he said. Zuma has won ‘Best African President’ at the African Consciousness Leadership Awards. Communities always called for Zuma to come and listen to their complaints. Zuma had recently undertaken a highly successful state visit to the United Kingdom. The President “saved the day” at the 2009 Copenhagen Climate Change Conference by helping overcome an impasse.

On Tuesday, Radebe again took the podium to defend Number One. But gone were his personalised Zuma CV highlights. On this occasion, his defences were sweeping: South Africa’s economic woes could not be laid at Zuma’s feet, but were the result of global recession, he said. He pointed to the R1 trillion spent in five years on infrastructure. He suggested that the DA look at its own record of job losses in the Western Cape. There was no mention of Zuma-specific activities or accolades.

Zuma retaining his presidency was presented by Radebe less as a deserved outcome than as an immovable inevitability.

“At the end of this debate, after much noise from the opposition, as sure as the sun will rise from the east, President Zuma will be the president,” Radebe concluded. “Two things may happen before their dream is realised. Firstly, pigs would have flown, and hens would have grown teeth. It ain’t gonna happen.”

Given Zuma’s myriad recent controversies, it’s understandable that his ANC defenders in Tuesday’s debate would seek to shift the focus from the man himself to broader tides around his presidency. Opposition MPs naturally sought to do the opposite.

Zuma-bashing in the National Assembly has been so routine for the parliamentary year thus far, though, that in some regards Tuesday’s debate felt like nothing special.

The DA’s Maimane produced a predictably fiery appeal to MPs, presenting support for Zuma as diametrically opposed to supporting the interests of ordinary South Africans. It seemed to lack some of the impact of Maimane’s “broken man” broadside, delivered during the post-SONA debate, perhaps because this kind of impassioned critique of Zuma has become an expected part of practically every National Assembly plenary.

Maimane called Zuma a “thief”, but was made to withdraw the comment. The EFF’s Primrose Sonti (of Marikana) reiterated the accusation in even harsher terms: “You are evil and I maintain he is a thief!” Sonti argued. “I don’t know how else you would say it in English but he stole the money [for Nkandla] because he did not consult South Africans before he took the money!”

Nkandla, Marikana, the Guptas, Zuma’s 783 corruption charges, attempts to clip the wings of criminal justice organisations: all were ticked off, once again. Zuma defenders repeatedly said the 2014 election results spoke for themselves as a vote of confidence in Zuma; opposition MPs repeatedly said that the current electoral system was flawed because voters could elect only a party and not a President.

At the end of the day, the outcome of what Speaker Baleka Mbete called with apparent sarcasm “a very critical vote” was a foregone conclusion. With the voting equipment temporarily malfunctioning, human settlements minister Lindiwe Sisulu suggested that the vote be simply held over to Wednesday.

After all, she said, “The President is going to be the president of the country until 2019.” DM

Photo: President Jacob Zuma shares a light moment with his deputy Cyril Ramaphosa (not in the frame) at the launch of an energy saving campaign in Pretoria, Friday, 13 March 2015. Picture: Department of Communications (DoC)/SAPA