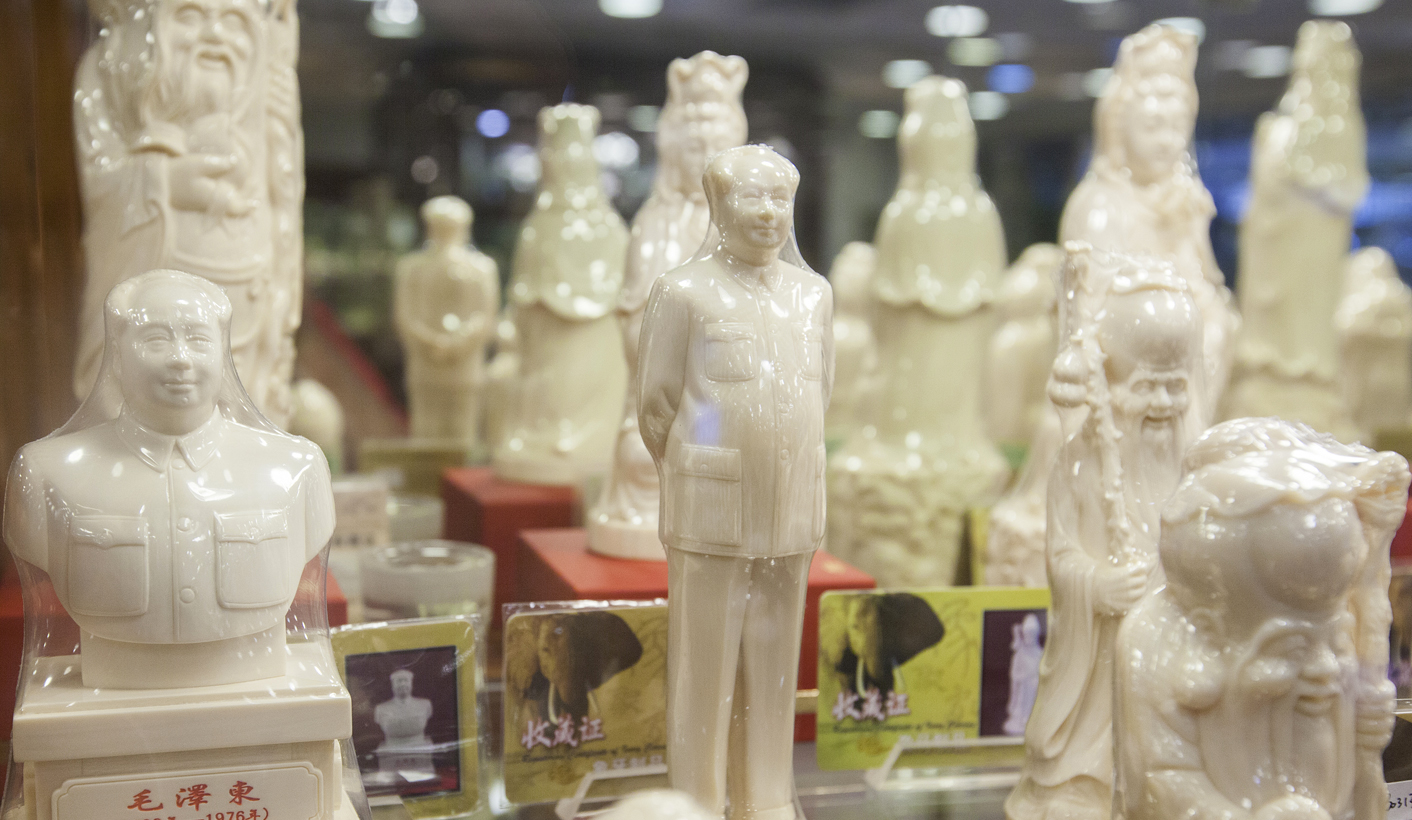 Once upon a time, a fair prince traveled to a distant land – of Dragons and Emperors but equally, of Ivory – to request that its leaders lend their influence to saving the elephant. In anticipation of an exchange of smiles and shaking of hands, China made a conciliatory gesture, announcing a temporary ban on carved African ivory products. Unfortunately, the resulting ripples, of this and other purely symbolic moves, will barely reach the distant shores upon which African elephants continue to be slaughtered for their tusks. By ANDREA TEAGLE.

Every year, 30,000 are killed. There are only 500,000 left. By some estimates, in a few decades’ time, we will be speaking about African elephants in the past tense. Outside of museums, all that will be left of these magnificent beasts will be worn around wrists and displayed on mantelpieces. Most of these ivory products will reside in China, whose demand for ivory today drives an estimated 70% of poaching.

Ivory is deeply etched into Chinese culture; but, where once it was unaffordable for the majority of Chinese, burgeoning affluence has created a new and seemingly insatiable pool of demand. This is further bolstered by investor confidence in a commodity whose price, along with its source, seems bound for the heavens.

Increasingly, the world is looking to China, along with Africa, to take the lead in stopping the slaughter.

In response to this pressure, China announced last month announced the latest of a series of moves: a one-year ban on the importation of carved African Ivory – that is, worked items obtained after the Convention on International Trade in Endangered Species (CITES) ban on international trade came into effect in 1989.

The purpose of the ban is “to observe, understand and scientifically evaluate the impact on elephant conservation by having such a measure in place”. Yet, conservationists globally are unanimous that it will not work. The reason is that carved ivory accounts for a negligible percentage of the illegal ivory that enters China. The majority of the incoming ivory is raw product that is worked in China’s own factories to be sold in illegal, and some cases, legal retail outlets. Ironically, banning the import of carved African ivory merely emphasises the absence of a ban of the raw blood ivory that floods China’s ‘legal’ trade channels. Thus, while some have cautiously welcomed the move, conservationists have largely dismissed it as ‘window dressing’ for the Prince William’s benefit.

His early March visit to China came at a crucial time. Once before, the world finds itself facing an elephant-poaching crisis, where killings had outpaced the natural birthrate. Then, in the late 1980s, CITES voted to ban the international ivory trade, effectively cutting off the main channels to Asian markets. African elephant populations made a remarkable recovery in the following decade. But legal trade was again opened when South Africa, Botswana, Namibia and Zimbabwe, arguing that their elephant populations were stable, successfully lobbied CITES to allow the sale of stockpiled ivory. Off the back of the two sales that followed, one in 1999 and one in 2008, illegal trade in China flourished once more.

The legal ivory that entered the country provided the perfect smokescreen for traders to sell off illegal ivory. A recent Save the Elephants (STE) research report found that from 2004 to 2014, legal outlets (which often themselves sell uncertified ivory) have quadrupled, while illegal outlets outnumber legal shops three to one in Beijing and eight to one in Shanghai. Despite recent attempts to crack down on illegal traders, the market is spiraling out of control.

Hence the reason for Prince William’s diplomatic four-day, high-profile visit to China, in which he attempted to strengthen ties between Britain’s royal family and the Chinese government, and spoke out against the illegal wildlife trade.

Addressing an audience of conservationists at the end of his trip, the Prince began by welcoming the steps China has taken to combat the illegal ivory trade, going on to say, “there is so much more to do”. As an ambassador for global conservation, Prince William’s approach largely mirrors that of the international community. Despite China’s illegal ivory trade that continues to flourish within its boarders, CITES has continued to favour a diplomatic approach, encouraging the fairy ‘steps’ that the world’s most populous country has taken toward a local ban, rather than apply real economic pressure to ensure one. (It is perhaps telling that the same elephant ‘sanctuary’ that William visited during his trip was also abusing elephants as performance animals, highlighting the dangers of accepting at face value apparent commitment to conservation.)

In 2013, the hint of sanctions did surface briefly when CITES put together its ‘Gang of Eight’ (later extended to the ‘Gang of Nineteen’) countries singled out for failure to do enough to tackle the illegal ivory trade. The countries, which included both import countries like China, and export countries like Kenya, were told to draw up and implement action plans within a year, or face sanctions.

China has jailed hundreds of dealers, shut down “at least 10 factories, and almost totally eradicated live ivory auctions”, according to the STE report. Perhaps these actions do reflect a genuine, if half-hearted, commitment to choking off the illegal trade. But it must be evident to China – a very effective law enforcer in many other areas – that they are nowhere near enough. For, while CITES nods encouragingly, the illegal ivory market is as rampant as it’s ever been.

Efforts to reduce demand have also met with limited success. A 2013 National Geographic survey of 600 middle-to-upper income Chinese found that although over 50% of participants had seen billboards displaying cruelty associated with ivory trade, less than one-fifth associated owning ivory with animal cruelty, and 84% planned to buy it. Although the findings are drawn from admittedly small sample, and attitudes may have begun to shift since then, the study highlights the need for a complete clampdown, coupled with extensive demand-reduction efforts.

Yet, there is no indication of a local ban, or sanctions, on the horizon.

Thailand, meanwhile, has seen a similar trend in illegal ivory trade in recent years, and like China, is one of the CITES Gang of Nineteen. Unlike China, however, Thailand has received ongoing pressure since the listing to make real inroads in the ivory problem. Last year, it was given a final warning (and a deadline of August 2015) to bolster laws on registering ivory importers, traders and legal stockpiles, or risk facing wide-ranging sanctions. Accordingly, Thailand in January announced the Elephant Ivory Act, which requires that all persons in possession of any ivory whatsoever must come forward to register it with authorities before 21 April 2015, or face penalties of up to three years imprisonment. Coupled with this is the introduction of forensic technology to detect illegal African ivory and choke its circulation.

As a result, in the past three months, the number of traders in Thailand’s main ivory market has dropped by 85%, as 170 of 200 shops proved unable to verify the source of their ivory and were forced to close.

Thus, although falling short of a total ban, Thailand’s efforts have been hailed as an important step by conservationists. China’s own registration system for internal trade, a certification scheme registered in 2004, is viewed as largely ineffective. Yet, again it has evaded criticism from CITES, adding to a growing sense that while other countries receive due pressure to crack down on the illegal wildlife trade, China’s economic and political influence allows it to sidestep its obligations under the treaty.

While better enforcement of its certification scheme might help, only by completely sealing legal ivory channels so effectively hijacked by blood ivory traders will China quash the illegal ivory trade. And, increasingly, it appears that the only way that China will even consider this move is if a real threat of sanctions, from CITES, moves over to take the place of smiles and handshakes. DM

Photo: A photo made available on 21 July 2014 shows an ivory bust of Chinese leader Mao Tse-tung for sale at a Chinese government licensed retail outlet in the Guangzhou Friendship Store, Guangzhou, China, 18 July 2014. According to a recent report by the Kenya-based elephant conservation group ‘Save the Elephants’, the price of raw ivory in China has almost tripled in the last four years. The surge in the price of ivory is driving a wave of killing of elephants across Africa and there is only little sign of abating. EPA/STR