Analysis: No confidence, no way – Jacob Zuma is still SA’s Number One 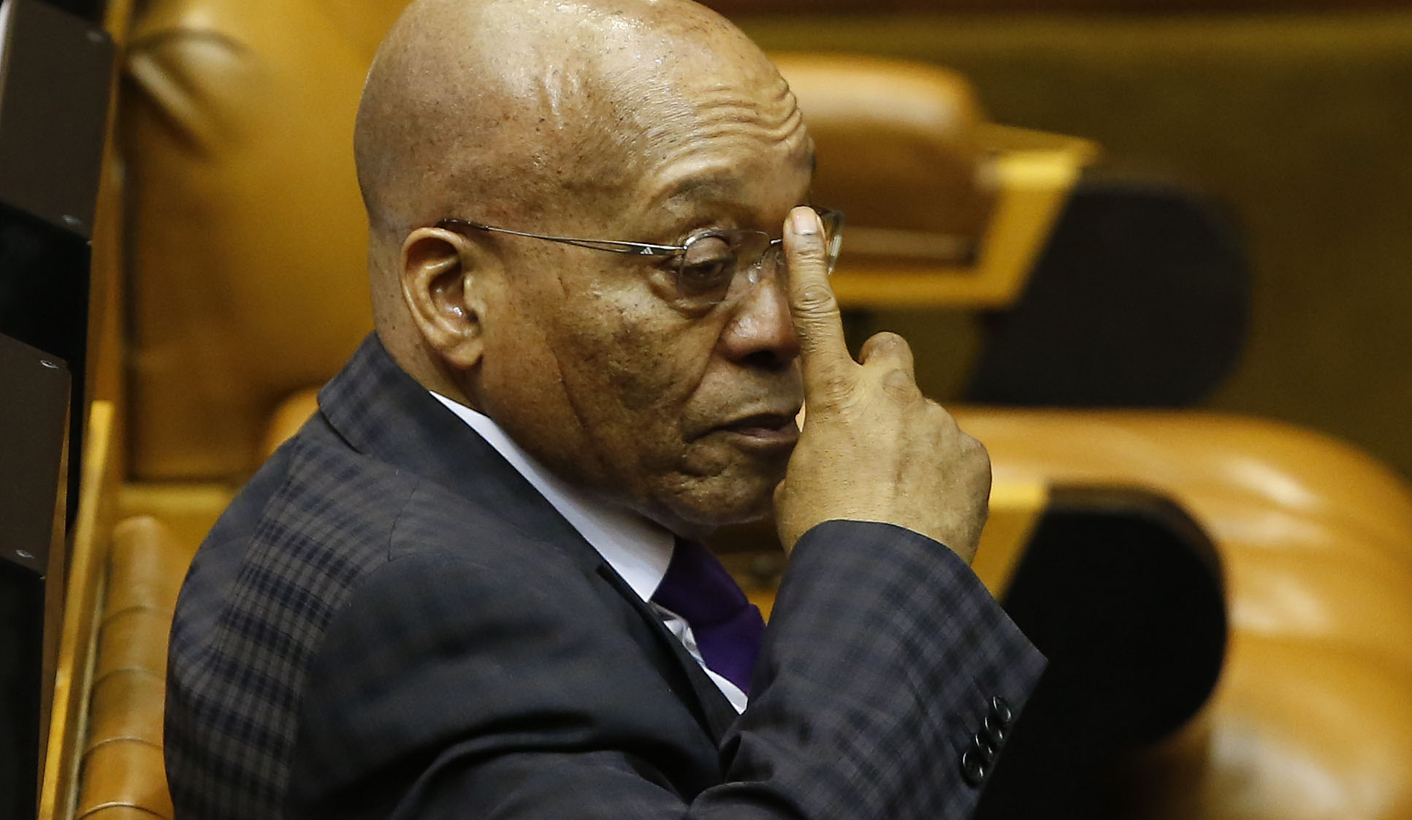 Could any motion of no confidence against President Jacob Zuma succeed in this term? No. Is this the last time the opposition will attempt to pass one? No. So why are we constantly on this ride? Democratic Alliance (DA) parliamentary leader Mmusi Maimane says they are “constrained by the straightjacket of our party system” from taking action that can successfully remove Zuma from office. Perhaps everyone should move on? However, Zuma remains pivotal to every major controversy in the country and the opposition parties’ best asset. By RANJENI MUNUSAMY.

There might have been a way to remove Jacob Zuma as president on Tuesday but it would have been illegal. Both Zuma and his deputy Cyril Ramaphosa were across the border in Lesotho attending the inauguration of the new Prime Minister Pakalitha Mosisili. A statement by the presidency said Zuma, Ramaphosa and International Relations Minister Maite Nkoana-Mashabane would be in Lesotho at the invitation of King Letsie III. It did not say who would be acting president while they were away.

Yes, they were a stones throw away and perhaps that is why an acting president was not announced. If there was no acting president, and the president and deputy president were technically outside the border, legally nobody was in charge. This could have allowed for a coup. Considering the desperation in the opposition benches to remove Zuma from his position, it must have crossed someone’s mind in Parliament that an overthrow was possibly the only way to unseat Zuma before the 2019 elections.

Until then, it seems that repeated attempts by opposition parties to pass a motion of no confidence in the president are doomed to fail. The ANC’s majority means that no matter how many times the opposition attempts by constitutional means to remove the president, and no matter what the basis for a vote of no confidence, it will not succeed. This is what the Leader of the Opposition Mmusi Maimane calls being “constrained by the straight-jacket of our party system”.

Maimane, who proposed the motion of no confidence in the National Assembly on Tuesday, argued that the scandals against the president and his refusal to be held accountable should convince all members of Parliament, including those in the ANC benches, to vote to support it. He called Zuma a thief and “a man who believes he is a law unto himself”.

He was backed up by Economic Freedom Fighters (EFF) MP Primrose Sonti, an activist from Marikana. She railed against the president, accusing him of sending the police to Marikana to kill mineworkers in August 2012.

As far as serious accusations against a sitting president go, being called a thief and a murderer is as bad as it gets. Technically both accusations are untrue as neither has been proven in a court. But “Nkandla” and “Pay back the money” have seemingly run their course and cannot provoke the desired outrage any longer.

During the debate, other scandals were cited, such as the Gupta plane landing at Waterkloof Air Force Base, the death of South African soldiers in the Central African Republic and the breakdown of state institutions to protect the president. Freedom Front Plus MP Pieter Groenewald said Zuma was like the main character in the movie “Runaway Bride” in the way he kept dodging responsibility for these matters.

Here’s the problem for the opposition parties: most of these issues arose before last year’s national elections, and people still voted overwhelmingly for the ANC knowing that Zuma was the top of the ticket. Even the damning Public Protector’s report on Nkandla was released two months before the elections and did not do significant damage to the ANC’s majority.

People knew Zuma was a compromised and flawed character before his first term as president, with personal financial problems, having survived a rape trial and a corruption scandal still hanging over him. He was given the benefit of the doubt and a chance to lead. He squandered the goodwill and performed badly, unable to deliver on most of his promises, allowed patronage networks to flourish and watched scandal after scandal pile up.

While this caused despair and disappointment, it was not enough for the majority of the ANC voting block to change their vote. The ANC received 62% of the vote because of its history, its delivery record since 1994 and loyalty and love for the party. Zuma’s leadership of the party has changed some people’s attitudes towards it but not enough to threaten its electoral majority.

As a result, the ANC has 249 seats in the National Assembly and can defeat the opposition in any vote. In the case of Tuesday’s motion of no confidence debate, 113 members were in favour, 221 opposed and eight abstained. The EFF’s Mbuyiseni Ndlozi tried to argue that ministers and deputy ministers should not be allowed to vote as they were appointed by Zuma and therefore had a vested interest in him remaining president. But even if all 76 ministers and deputy ministers did not vote, the motion would still have been defeated.

This must be immensely frustrating for the opposition as despite all the evidence and arguments they present, the seat configuration in Parliament wins. As Minister in the Presidency Jeff Radebe put it, for the motion of no confidence to succeed, pigs would fly and hen would grow teeth. “It ain’t gonna happen,” he said.

In his second term, perceptions of Zuma’s presidency has worsened with continued defiance of accountability, attacks on independent institutions, the electricity crisis and the ANC desperate attempts to protect the president. Will all this be enough to alter voting patterns? We will find out during the local government elections next year. And will a poor performance at the municipal polls affect Zuma’s grip on power? Only the ANC can decide that.

This is why United Democratic Movement leader Bantu Holomisa adopted a different tack in the no confidence debate. He said South Africa found itself “in a leadership crisis of epic proportions” and the president was at the centre of the problem. Therefore he asked the ANC to “take back its president and keep him away” – which drew howls from the ruling party benches.

What Holomisa was advocating was a “recall” of Zuma in the way Thabo Mbeki was removed as president in 2008. He said the electoral system was flawed as it did not allow voters to elect a president directly, and called for a change in the voting process. He said in light of all the problems facing the country, it was time to discuss an “exit strategy” for Zuma.

Such a discussion can only emerge from ANC ranks and it does not appear to be happening. ANC leadership structures, including the national executive committee, remain largely united behind Zuma. Their survival and sustenance is dependent on him remaining in power. This is why, despite a belief amongst some opposition party members that a secret ballot would alter the no confidence vote, ANC MPs remain in resolute support of Zuma.

Of course, if the ANC performance in the local government elections is so poor that they lose control of major municipalities, there might be a shake-up. But even then, the chance of a recall of the president is unlikely.

The charge of ANC members participating in Tuesday’s debate was that the DA had introduced the no confidence motion because it had nothing else to offer and was wasting Parliament’s time.

But the opposition also needs Zuma and the rage against him to keep the public engaged. The EFF has traded successfully and won some of its support on the basis of anger against Zuma. And for as long as the DA’s constituency is antagonistic towards Zuma, the main opposition will consolidate its support base.

So as much as they want to get rid of Zuma, they need him. He is the opposition’s biggest asset and strongest campaign point. Like in his own party, many people are dependent on Zuma to keep doing what they do. If there was no Zuma, whatever will we complain so vociferously about? DM