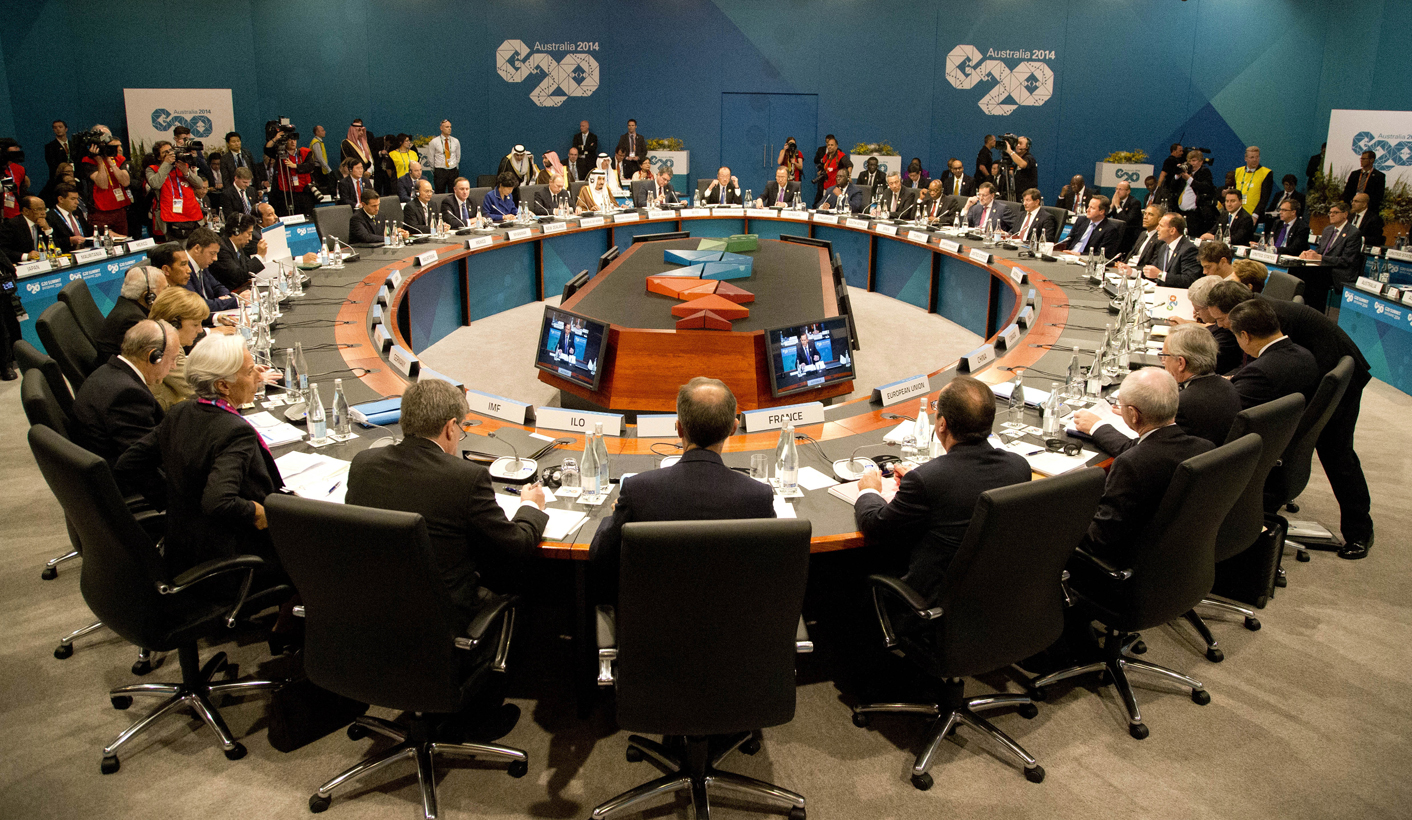 Last week, inspired by a public decision by Russian President Vladimir Putin to take a pay cut, CNN put out a list of world leaders' salaries. While no one was really surprised that Barack Obama came first, there was some anger at our president’s fourth place. That has led to the usual criticism one sees when Zuma is involved in anything. But the list is a nonsense; it doesn’t actually measure anything and it is just another example of creating news where there's none. By STEPHEN GROOTES.

CNN’s list starts with Obama, then moves to Canada’s Prime Minister Stephen Harper, and then Germany’s Angela Merkel. After that it’s Zuma, followed by Eton-educated David Cameron. This means that Zuma is above not only Cameron, but people like Russia’s Putin and China’s Xi Jinping, not to mention Zimbabwe’s Mugabe.

Which, predictably, leads to the charge that Zuma is over-paid. In reality, though, the list is nonsense, a careless simplification of what actually is a complicated issue.

Let’s first dispense with the obvious:

Comparing absolute amounts is wrong to start with: Zuma is the highest-paid leader of the Brics nations, the highest paid leader in Africa, and the highest paid leader from what you could call the “Global South”. The salaries are worked out in US dollars, which means that the dollar-buying power within a specific country plays a big part of this calculation. As a result, the purchasing power parity means that Zuma is receiving, in real terms, more than most of the others. To put it another way, he could buy more McDonald’s Big Macs a month than the other leaders on this list.

And, in case you’d noticed, we are not the richest of nations; we have a huge unemployment rate, rampant inequality, and a bloated government sector.

And yet, none of it justifies the criticism of Zuma in this regard, because it is easy politics and the starting point itself is nonsense.

But wait, there’s more. Here are the massive additional problems with this laziest of all lists.

1) It mostly is not true

The first reason the list is a nonsense is that it looks at the published salary for each of these leaders and not at the actual amounts spent on them, and the real wealth they amassed during their tenure.

Thus, Xi’s salary is, nominally, only USD22,000. But that is surely not his only income. As the leader of a country whose leaders live lives shrouded in secrecy, no one appears to know how much money is really spent on his lifestyle. There have been persistent rumours about the lifestyles of those with real power in China. They may not espouse monarchism publicly, but they certainly know how to live like kings. The fact is, in Chinese society, Xi comes from a family involved in the upper echelons of the Chinese Community Party for a long time. His father was on the Long March with Chairman Mao. This means his income, in terms that we would understand, is unlikely to depend much on the salary amount stated by the Chinese government.

(All the while, Xi is revered as the anti-corruption leader. Three years ago, the son of one of his closest associates, Ling Jihua, died in a car crash, after smashing his Ferrari. In the car with him were two “semi-naked” young women, one of whom died too. He was just 23, making it unlikely that he had paid for the car himself. In 2014, Ling Jihua, and his immediate family, became one of the highest profile targets of Xi’s anti-corruption drive – further cementing an ever-rising personality cult that follows him everywhere. – Ed)

Putin’s act in refusing to take some of his salary because of the tough economic times Russia is facing (partly of his own making) demonstrates this. It’s unlikely to make the slightest bit of difference to how he lives. Over the last 15 years, Putin and his merry team comprising former KGB operatives, and other assorted trusted men, have orchestrated an almost total takeover of Russian economy, both at previously state-owned and current privately owned levels. Executives that are ‘in’ are allowed to conduct roaring business, while ones out of favour are soon out of money too, save for some leftovers they manage to stash in foreign-based accounts, if they are lucky or realistic enough. If you are Putin and control a 150-million person economy so closely and completely, why bother with a high nominal salary anyway? So the 20% pay cut he ordered for himself and the rest of Kremlin a few weeks ago seems even more cynical.

It’s almost as ludicrous as Zimbabwe’s Robert Mugabe saying with a straight face that he keeps his family on a salary of US12,000 a month (US10,000 base plus US2,000 benefits). Really? And the imported marble for the family home? And the fees of the kids overseas? Grace Mugabe’s shopping sprees? It is obviously devoid of truth.

2) For many a president/politician, it’s not about the money

In practical terms, for most countries, including ours, a former head of state is looked after for life anyway. Where Obama and Zuma are similar is that their security costs, accommodation and travel are all paid for by the state. And it’s well known that their costs once they are out of office will be borne by the state as well.

When it comes to money and power, everyone knows, power is what counts. Gwede Mantashe may still live in Boksburg, and still have modest tastes, but everyone knows he has real power. Money doesn’t necessarily mean much at that level. Tokyo Sexwale may have money, but it hasn’t really helped his political career very much of late. Cyril Ramaphosa has money too, and yet he jumped on the opportunity to have a shot, no matter how difficult and long, at the country’s top job.

US President Harry Truman never even owned a house until he became a former president. Many other presidents and prime ministers would have been financially much better off by not being presidents and prime ministers. Britain’s David Cameron came from a well-off family, and then married into more wealth. He certainly doesn’t depend on his official salary for much. Being UK PM is one of the world’s toughest career choices. There is simply no salary level justified for the stress of a multi-tasking job that also forces one to face the vociferous and incredibly well-prepared opposition and its questions once every week. It takes a special person to withstand it, and no money can justify it. The thrill, maybe. A call for public service, definitely. Being partly delusional in thinking that only you should lead the country at that time, or forever – definitely. None of it is about salary money.

3) Salary pay is politics, too

Presidential salary cut, strangely enough, is pretty good politics sometimes. Bolivia’s Evo Morales took a more than 50% pay cut when he became president in 2006. His move then automatically slashed the government cost, as no government employees can have a salary higher than the president. Morales is these days well into his third term, his populist policies genuinely helping uplift lives of Bolivia’s poorest of the poor.

And there’s the most successful salary cutter of them all, Uruguay’s Jose Mujica, who donated 90% of his salary to good causes and finished his constitutionally-limited one-term presidency with a mid-sixties approval rating and a country with a sharply reduced percentage of poor people. (And legalised marijuana as one his legacies.)

4) Whose money is it anyway?

In the grand scheme of things, money is relatively easy to make. Many people manage it in their lifetimes, and many families are able to create real wealth that grows with each generation. Power is much harder to grab: it requires huge sacrifices, takes more than just intelligence and a faculty for numbers, and can always be taken from you through the bad behaviour of a crook, a blunder, or even a government. But power, that’s what the real deals aim for; they know that with power comes much more than sheer money. And real power includes the ability to make, or take real money anyway, if you want it.

The fact that South Africa is a relatively poor country, or that many of its citizens are poor, is likely to lead to claims that Zuma should be paid less. But the amount of money he’s paid as a percentage of our tax-intake is tiny. It’s meaningless. Like Nkandla, the amount paid to him doesn’t really matter at all. It wouldn’t keep one of Eskom’s diesel power stations running for no more than few minutes.

All of that said, the symbolism of a leader’s salary is important. It’s about the intrinsic value that is placed upon your leadership. This means that it is always a political issue. Whenever someone tries to increase the salaries of leaders in democracies, it’s an excuse for their opponents to lay into them. In the UK this means that the salaries of MPs haven’t been substantially increased for years, with the Economist now fretting that the job isn’t attracting real high-flyers as a result. So people who claim that Zuma is receiving too much are likely to say that whether he’s paid half a million rand a year or a minute. And his supporters will argue the opposite.

5) It’s all about bad journalism

In the end, the salary amounts paid to leaders have no importance, to the point of being meaningless to compare. They can be used as symbols, both by the leaders themselves, as Putin has done, and by their enemies. As a political wedge issue, it’s simply a nonsense. As numerical issue, even more. Comparing apples and pears may sometimes feel like a good and cheap way to fill global broadcasting minutes, but it never aided anyone’s understanding of the real picture. Then again, that’s CNN for you. DM

Photo: Leaders meet during a plenary session at the G-20 summit in Brisbane, Australia 15 November 2014. The G20 summit will be held in Brisbane on 15 and 16 November. The G20 represents 90 percent of global gross domestic product, two-thirds of the world’s people and four-fifths of international trade. EPA/ROB GRIFFITH / POOL