The Fantastic Four: How the government invented its greatest fear 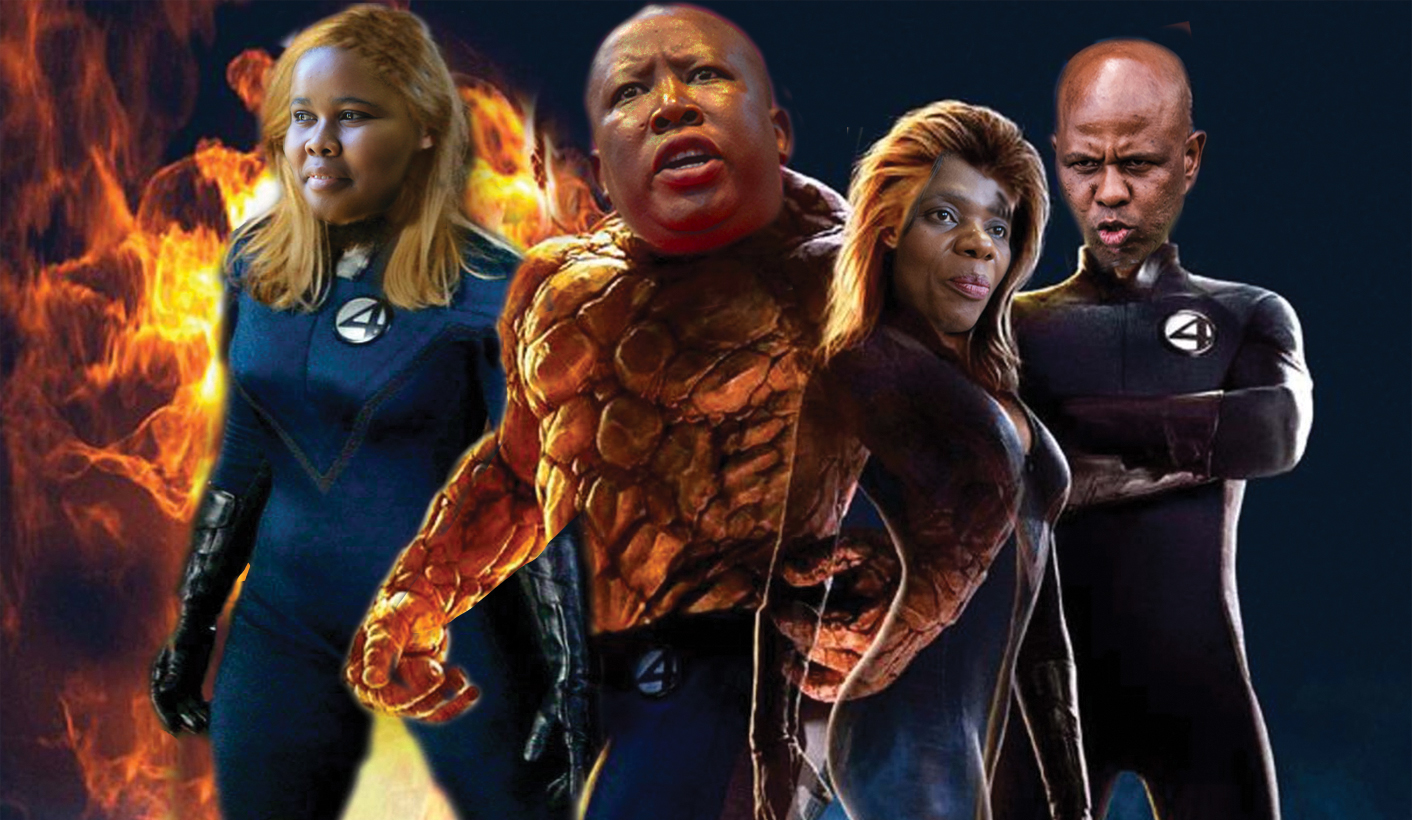 You live in a crazy universe, but you probably already knew that. Still, now that Julius Malema, Thuli Madonsela, Lindiwe Mazibuko and Joseph Mathunjwa are being investigated by the SSA, perhaps its time to redefine crazy. By RICHARD POPLAK.

It’s an important question, one that has been tackled more than once now that Hollywood makes nothing but superhero movies. We know that Batman acquired his suit from the Wayne Corporation’s basement armory. On the other end of the spectrum, Peter Parker knitted his own kit, much like a Cape Town hipster crafting tortoiseshell glasses out of an actual tortoise shell. Hulk’s magic purple pants remain magic and purple (we have yet to espy his green junk, and thank Marvel for that!) while female superheroes still spray-paint their suits on, although sweats and a tank-top would likely serve them better.

Who, I wonder, would work the sartorial beat for South Africa’s own Fantastic Four? I’m referring, of course, to Julius Malema, Thuli Madonsela, Lindiwe Mazibuko and Joseph Mathunjwa, respectively the leaders of the Economic Freedom Fighters, the Public Protector’s office, the Harvard Helen Zille Appreciation Society (kidding), and the Association of Mineworkers and Construction Union (AMCU). Last week, the Secret Security Agency told us that they were investigating whether the mighty quartet were CIA agents, using as evidence a rock-solid blog post on a WordPress site called AfricanInteligence (the second “L” is currently being waterboarded in a Thai black-site).

The Fantastic Four are, it must be admitted, an unlikely ensemble, but hasn’t this always the case with superhero origin stories? Who would’ve thought that Thor and Tony Stark’s warring personalities could successfully merge to save the world from a giant alien robot snake, or that ornery Wolverine could team up with anyone? There’s nothing at all far-fetched in the SSA’s investigation—unlikelier things have happened.

Still, the drama of Julius Malema and Lindiwe Mazibuko trying to figure out how an exploding pen is supposed to take down the security gates at Nkandla would be filled with ideological subtext—is the pen a dialectic expression of the will of the People, or is it the genius of market forces at work? Perhaps there’d be a frisson of mutual attraction?

We can only hope.

Madonsela would make the perfect den mother, and Mathunjwa already has all the supercars the team would require for hit jobs on National Strategic Points like the Sandton News Café, or for setting Cape Town on fire. (Where was the Public Protector when the fire began blazing? Just asking.) The team, as ridiculous as it might seem on paper, is perfect in its conception. Unlikely is the new likely.

What is it that drives the insanity of those who work in secret? What is it that turns them into shivering, schizophrenic nutjobs? The answer lies in the nature of spying, which exists out of sight of democracy’s corrective mechanisms—legislators, judges, the press, Dr. Doom. Spies are the embodiment of the impulses of those that rule—they track a government’s shadow, its flipside. The Russians spied on the Americans, the Americans spied on the Russians, and when the digital age was born, everyone spied on everyone, just in case. What does not belong to the government is the government’s enemy.

The ANC has gone insane.

Don’t fear, though—they’re hardly alone in their condition. They share a padded cell with any ruling outfit that has spent too long on the Iron Throne; their id and their ego finds expression in the secret world that power creates for itself when its becomes fixated on maintaining only itself, which it inevitably does. If the CIA is one of a number of constants shared between Democrat and Republican administrations, that’s because America is about power—its beacon-on-a-hill imperial mission statement is to dispense its power, impose it, use it.

Every now and again, this Underworld spits up its volcanic bile and we catch a glimpse of what is actually happening beneath our feet. The (largely ignored) Spy Cables saga taught us much about how our government thinks, and how it is willing to horse-trade its own citizens’ rights for all sorts of kickbacks. If there was some sanity in the Spy Cables—for instance, South Africa’s spooks don’t see a terrorist under every rock—it only served to highlight the absolute craziness.

And to cap it off, the SSA informed us that it was going to investigate the existence of the Fantastic Four, because of, you know, social media.

Straight from its own unconscious, the government found its greatest fears manifested in a bullshit website run by, well, who knows? Like any neurotic, they screamed those fears to whomever would listen, advertised them, plastered them over town. Was it a cry for help? Not quite—neurotics never want help. They want to remain sick, because their sickness is their power.

It hurts the brain. Maybe it’s meant to. But to come back to the question: who sews superhero suits? Well, we do. As citizens, we clothe those who are willing to hold the government to account. Love ‘em or loathe ‘em, the Fantastic Four represent a grab-bag of opposition politicians (on sabbatical or otherwise), a union impresario not swallowed up by the tripartite alliance, and a Public Protector unconnected to the ruling party’s patronage network. It’s our job to make sure they do theirs.