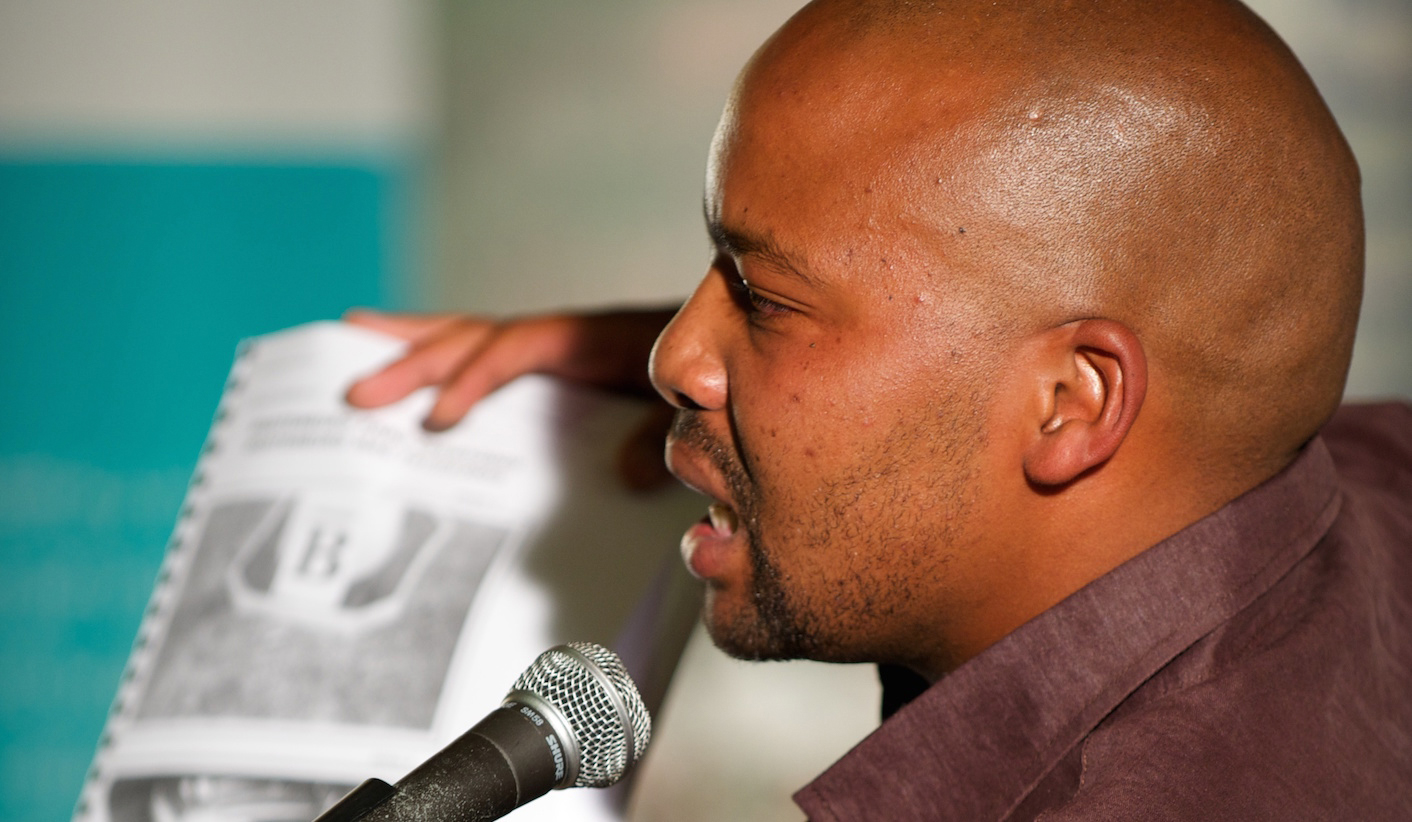 While the persistent rhetoric from President Jacob Zuma is that government is serious about tackling corruption, the reality is whistleblowers in this country risk their lives and face other dire consequences for doing so. The Open Democracy Advice Centre has documented the harrowing stories of ten South African whisteblowers in an attempt to highlight their experiences and identify key policy and legislative changes necessary to create a safe and just environment for these citizen heroes. By MARIANNE THAMM.

The morning Bernard Banisi arrived in Cape Town from his home in the Eastern Cape for the launch of the ODAC booklet, Heroes Under Fire, he said he knew his movements had been observed and monitored. Like his younger brother Xola, Bernard, a veteran trade unionist and an official with the Department of Co-operative Governance and Traditional Affairs, is unafraid to highlight corruption and speak out, even though doing so cost his brother his life.

Bernard is currently investigating corruption in his own workplace and has experienced a series of “odd” occurrences like “our computers suddenly crashing and our cell phones not working during a meeting”.

In September last year, Xola, a SAMU (South African Municipal Workers Union) member who worked in the procurement department of the parastatal, BloemWater, and who had uncovered tender irregularities, was murdered. He was shot three times outside his girlfriend’s house in Bloemfontein’s Hillside Township shortly after handing a dossier detailing the fraud to the Hawks. No one has yet been arrested for his murder.

Bernard is convinced his brother’s murder was a “hit”. Xola, he says, had kept him informed of what he had uncovered. He had received several death threats, which Bernard had recommended he report to local police. But there is no record of his having done so, which is suspect, Bernard told Daily Maverick.

Bernard Banisi attributes both his and his brother’s fearlessness to the influence of their maternal uncle, Charlie Ntsalie “Rock” Ndibi, who spent 15 years as prisoner 1/2799 on Robben Island, sharing a cell with individuals who today occupy some of the most powerful positions in the country.

After his release in 1973 Ndibi, who Bernard said “would always tell it like it is no matter if you ended up not liking him”, mentored his nephew, providing him with a political education. The young Bernard’s understanding of politics can be traced back, like a deep root, to Eastern Cape elders such as Hetese “Zikhali” Mtibixelwa and Govan Mbeki.

“It is for us to fight it [corruption]. You can’t just sit back. And if you start to uncover it you cannot turn around, you have to finish it. I know I am a target. Wherever I go I have to take care of myself,” said Bernard.

The launch of the ODAC booklet comes a week after disclosures by the Daily Dispatch that the Siyenza Group, a company with links to ANC Secretary General, Gwede Mantashe’s wife Nolwandle and his son Buyambo, as well as President Jacob Zuma’s son-in-law, Lonwabo Sambudla, and Small Business Development Minister Lindiwe Zulu’s son, Boitumelo Itholeng, had been awarded an irregular tender worth R631-million to build toilets by the Amathole district municipality. The toilets were meant to be completed by June this year but the newspaper found that very little had been accomplished. Siyenza Group is owned by Butterworth-born businessman Bongani Mpeluza.

Bernard believes that corruption is corroding the democratic freedoms of the country – gains for which people like his uncle sacrificed their lives. In that sense his views dovetail with those of US writer, Patrick Radden Keefe, who, in a New Yorker piece titled “Corruption and Revolt – Does Tolerating Graft Undermine National Security?” suggested that we lack a “conceptual vocabulary” for the “pathology” that is corruption. Keefe is of the opinion that corruption should be declared a direct threat to any country’s national security.

“The very term corruption is so inclusive to be almost meaningless, encompassing bribery, nepotism, bid-rigging, embezzlement, extortion, vote-buying, price-fixing, protection rackets, and a hundred other varieties of fraud,” he writes.

All of the South African whistleblowers featured in the ODAC booklet have had to deal with corruption in one or other incarnation as described by Keefe. Since 2000 the centre has provided direct and indirect support to whistleblowers through policy interventions and research to date has proved that their experiences have been nothing short of “harrowing”.

The stories of the 10 whistleblowers who applied the maxim that “the only thing necessary for evil to triumph is for good men to do nothing” provide shocking insights into how acts of civic- mindedness and honesty ultimately wreaked havoc on all of their lives.

Apart from the murder of Xola Banisi, another whistleblower, Moss Phakwe, also paid with his life. Giving an emotional speech at the launch of Heroes Under Fire at the District Six museum this week, Moss’ son, Tlholo Phakwe, held aloft the court docket with photographs of his murdered father.

“My father’s blood ran black, green and gold. The party he lived for, the ANC, killed him. My father could have been assisted by his ANC that he loved dearly and died for. I’m concerned about the silence on this matter,” a tearful Phakoe told those gathered before he passed the docket around.

Moss Phakwe was an ANC councillor in Rustenberg and was assassinated in March 2009 after exposing corruption in the municipality. Phakwe had made several attempts to alert ANC leadership of the corruption, meeting first with ANC Secretary General, Gwede Mantashe and then President Kgalema Mothanthe.

Later his father met with Jacob Zuma at Nkandla in December 2008 where Moss set out what out what he had uncovered.

“It took them the whole night to explain the case,” said Tlholo.

A month later, he said, his father had met with Zuma, Motlanthe, Billy Masethla and other ANC senior leaders in Potchefstroom. He was told that his case would be handled by the late Minister of Co-Operative Governance and Traditional Affairs, Sicelo Shiceka.

Two days later Moss was assassinated in the driveway of his home by Enoch Matshaba, bodyguard of former Rustenberg mayor, Matthew Wolmarans who had been fingered in the dossier. Wolmarans and Matshaba were later sentenced to 20 years for their role in the assassination, but the sentences were set aside by the North West High court in June last year due to a legal technicality.

“They are out, walking the streets. They are free,” said Tlholo.

The stories of Imraan Ismail-Mukaddam, who exposed unfair competition practices among bread distributors and which resulted in a R90 million fine imposed by the Competition Commission on Pioneer Foods, Foodcorp and Tiger Brands, also features in the ODAC booklet, as do those of Drs Paul Theron and Basil Brown, both of whom worked in the public service, and who were victimised after exposing gross corruption and incompetence.

“The physical security of both whistleblowers and their families must be considered a national strategic priority. In order to create a sustainable environment for transparency, we also need a political and social change that speaks of whistleblowing as a positive act, taken by individuals as a demonstration of their commitment to the prosperity of their country,” the ODAC booklet concludes.

While on paper, the Protected Disclosures Act (PDA) of 2000, makes provision for employees to report unlawful or irregular conduct by employers and fellow employees and provides protection for those who dare to whistleblow, the lived experience of those who have done so points to serious flaws not only in legislation, but also in application.

In June last year the Department of Justice published a proposed list of amendments to the PDA. Five key changes are envisaged including an extension of the scope of the Act to include temporary employees in the definition of “worker”; extending joint liability to the client of an employer; as well as placing a positive duty to investigate and keep the whistleblower informed of progress.

The amendments also “create a duty” for the person to whom a complaint has been made to take action in writing within 14 days and to notify the whistleblower of steps to be taken, to investigate or refer a disclosure, a duty to create procedures, as well as an extension of the protection of civil and criminal liability.

The latter is viewed as a “significant change” in that the whistleblower will be protected not only from “occupational detriment” – which includes victimisation or suspension – but also from civil or criminal liability. The amendments will also deter anyone from making false disclosures.

The test includes the suggestion of a “Code of Good Practice” that could provide guidance to private and public bodies on interpretations of the law, implementation of whistleblowing policies, and alternative mechanisms for preventing corruption. A further need identified is a whistleblowing network of civil society organisations to provide advice and support, awareness-raising, and parliamentary advocacy on whistleblowing issues.

The matter of whistleblowers and their protection is a complex one but for now, says the ODAC, tragically it appears as if wrongdoers often triumph.

“Some [whistleblowers] may be successful and their reputations later restored to a degree, with recognition of their efforts. Some may try to start a new life, in a new place, with a new job, in an effort to keep the social impact to a minimum. However, many are damaged permanently in some way.”

The position of the whistleblower in South African society “is now becoming exceedingly difficult”.

For Tlholo Phakwe’s family, life will never be the same. It has been left, he says “in a devastated state of trauma”.

“Political assassinations are on the rise in South Africa and communities are left without assertive leadership and ambassadors of development as they are gunned down in numbers…My father died for an uncaring ANC…the restless spirit of Moss Phakwe will haunt this movement if its leaders continue to keep silent on this matter.” DM

Main Pic: A distraught Tlholo Phakwe waves the court docket with evidence of his father’s assassination at the launch of the “Heroes Under Fire”. (Picture Naashon Zalk/ODAC)