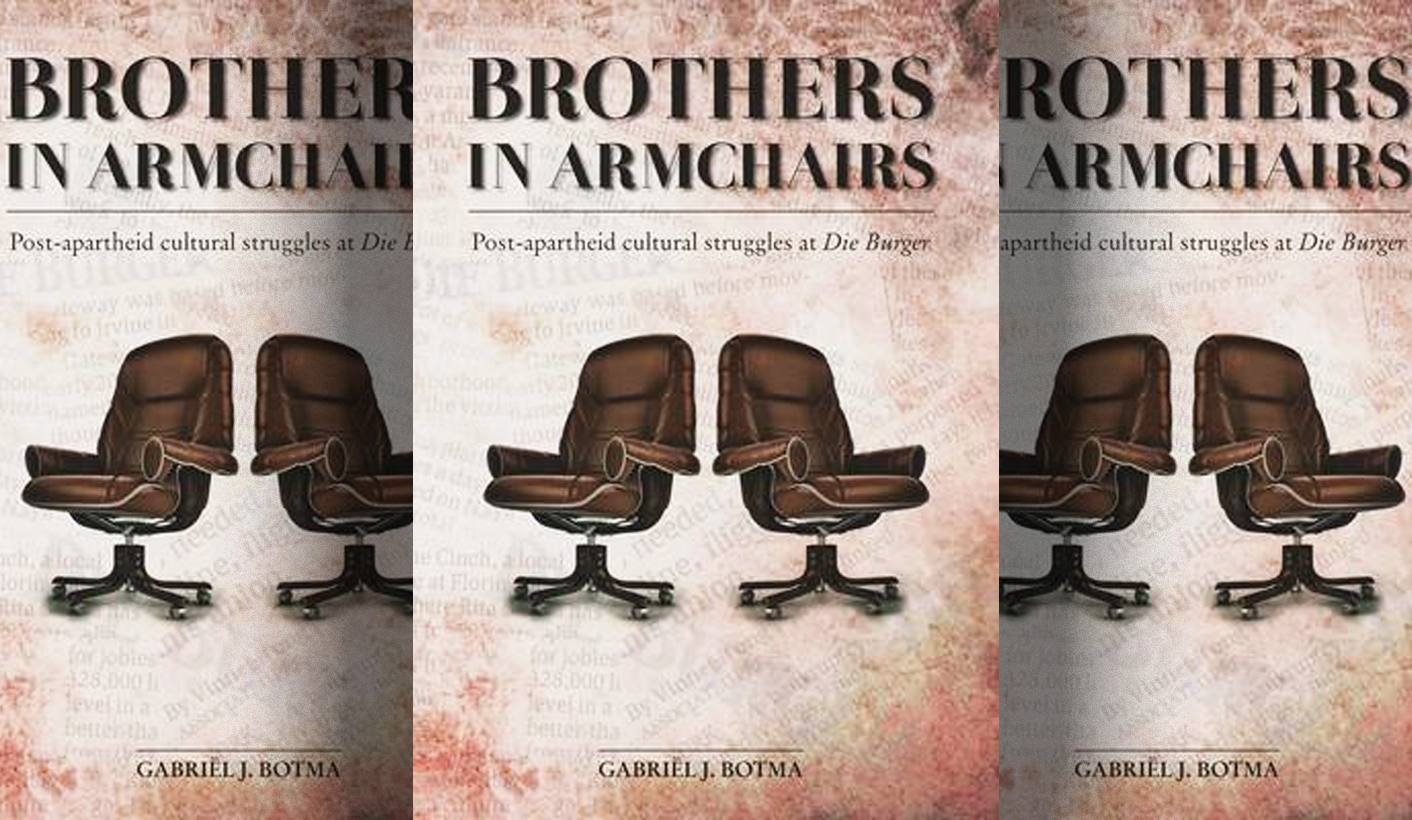 From refusing to make a submission to the Truth and Reconciliation Commission about its complicity in propping up Apartheid to forcing journalists to endorse the National Party as part of their employment contracts, Naspers has remarkably survived its odious past. Not only survived, but thrived, as one of the 21st Century’s biggest global media players. In a recently published book, former arts journalist Gabriël Bothma explores how some writers and editors attempted to navigate the dubious ideology and slavish propaganda. By MARIANNE THAMM.

Media ownership has always been a complex and controversial matter in South Africa. There is a long, complicated history of newspaper control and ownership since the publication of the first newspaper in the country in 1800, The Cape Town Gazette and African Advertiser, owned by two slave traders, Alexander Walker and John Robertson.

In the past, the country’s press was cleaved into three distinct tributaries: the English-speaking press, usually owned by interests in the mining industry; the Black press, often supported by missionaries (with the notable exception of Imvo Zabantsundu, established by John Tengo Jabavu in 1884, and Indian Opinion, started by Mahatma Gandhi); and the Afrikaans press, established in 1915 with the publication of Die Burger. Die Burger was the official mouthpiece of various incarnations of the National Party, and served as the scaffolding for economic, political and the cultural empowerment of white Afrikaners.

It was here that the recently married Gabriël Bothma found his first job in 1988 as a general reporter at “a hallowed institution of Afrikaans journalism”. But he was conflicted. What would it be like, he wondered, working for the “notoriously conservative supporter of the NP?” Once inside the newsroom, he writes, he discovered he was not the only young, Afrikaner journalist to experience the same dilemma.

By then, of course, Max Du Preez had already pioneered the Vrye Weekblad, a courageous, independent Afrikaans anti-Apartheid weekly, collectively owned, and which fearlessly countered the less confrontational narratives of both the mainstream English and Afrikaans media. But Du Preez’s guerrilla paper was small, cash-strapped and constantly under threat. The only alternative, then, for younger Afrikaans journalists was inside the belly of the beast.

Bothma understood that the most “liberated” zone at Die Burger was in the arts section, where journalists enjoyed relative freedom, and he managed to join this department in 1992.

After 10 years at Die Burger Bothma left to join Stellenbosch University where he realised that he had found himself at the newspaper during a key transitional period in its history 1990 – 1999 – and that little of this period had been recorded. He began researching a doctoral dissertation which has now been turned into a book Brothers in Armchairs – Post Apartheid Cultural Struggles at Die Burger (Sun Press) – which explores, in particular, how various arts editors attempted to use the pages to challenge the dominant, slavishly NP-supporting ethos of the rest of the publication. Bothma scanned back-issues of Die Burger as well as interviewed many of the role players who edited sections of the newspaper at the time.

Bothma admits that the question as to why a number of “self proclaimed freethinking journalists in fact joined the restrictive environment of Die Burger in the first place” has not been addressed in any depth in his study. His book, while academic in scope, does offer those who are interested in the today’s media landscape interesting insights and valuable cautions as to the dangers and pitfalls of self-censorship and unquestioning, partisan journalism.

Hendrik Coetzee, Die Burger political writer and news editor in the 1990s, told Bothma “you had to decide if you could live with it [explicit editorial support for the NP and resultant instances of editorial interference] or if you were going to just pack up your bags and go”. It was common knowledge that promotion at the paper went through the “political desk” which was required to “follow the party line”.

Botha notes that for decades, new Naspers employees had to declare their support for the “broad national aims” of the company in writing before joining the company, but this requirement had clearly been discontinued by the time he joined.

A key moment of personal crisis for Bothma arrived in 1998, he says, when Naspers refused to testify before the Truth and Reconciliation Commission (TRC) and a group of around 100 journalists broke ranks with management and submitted an apology “for the role that Naspers journalists played in building and maintaining Apartheid hegemony”.

Culture and language played a key role in the building and maintenance of Apartheid hegemony. Afrikaner intellectuals (well, at least those who supported the NP) and politicians believed that the “high arts” – literature, fine art, and classical music – helped to define Afrikaans and Afrikaners as cultivated, literate and influential. While the arts pages of most English-speaking newspapers already then covered the “lower” or “popular arts”, Die Burger’s arts pages were, for a time, reserved spaces for Afrikaner intellectuals who took culture very seriously.

In the 1960 and 70s, while writers such as Andre Brink, Breyten Breytenbach and Etienne Leroux were censored and declared “undesirable” by the state, Die Burger critics sought to establish the artistic and literary merit of their work. However, on the paper’s other pages, these self-same writers were criticised for their apparent meddling in political affairs.

In 2010, Ton Vosloo, Naspers Chairman from 1997 to 2014, described how a board oversight committee of the company was tasked with allocating “valuable” shares to only “good Nationalists” in the decades before the company listed on the JSE. It was a good bet as today the company ranks as one of the largest global broad-based multi-media empires with tentacles in the rest of Africa, China, Latin America, Central and Eastern Europe, Russia, India, South-east Asia and the Middle East. Ironically, it is the most successful South African media company. Almost all of the once-large companies that once owned the English-speaking media no longer exist and today, the English-speaking print media (apart from those publications owned by Media24 – one of Naspers’s companies) are battling to survive in a ruthlessly competitive global new media landscape.

In the early years Naspers had always maintained a relationship of “mutual trust and respect” and had collaborated with various Apartheid governments. As a result, editors and political journalists at the paper had an “inside track” on the inner workings of government. But, says Bothma, “this came at a price” as senior government officials were granted influence over the operation of the newspaper and its owner (Naspers), also becoming directors on the board of the company.

In the 1980s the company began to explode its narrow view and definition of Afrikaner nationalism – attempting to include black South Africans who spoke the language, but by the start of the 1990s, writes Bothma, Die Burger had “misjudged the ability of the NP to control the process it had officially set in motion and underestimated the degree of unity in black political circles to achieve a negotiated settlement on their own terms”.

The newspaper also overestimated, he says, the role of cultural heritage of Afrikaners, and particularly the language, would play in the construction of a “new national identity”. The remnants of this struggle continue to play out on the pages of Afrikaans-language newspapers today.

One method Naspers, post-Apartheid, continued to support Afrikaans was through sponsoring cultural projects, like festivals, albeit more as a commercial rather than political venture, although the political ghost has never quite been put to rest. But in the end, the commercial/business side of culture – came to usurp the lofty position once held by the “higher” arts.

Because of the monetary or commercial interest in these arts festivals – “arts desks” and arts editors – began to be sidelined with regard to the selection of material that appeared on arts pages – with the needs of festival organisers taking precedence.

Bothma’s book covers the rise of arts journalism at Die Burger and how editors, like Kerneels Breytenbach, began to offer readers news and reviews on “wider” South African culture in an attempt to expand horizons and perhaps situate them in a broader South African context.

However, it was when Afrikaans writers were tasked with critiquing or writing about emerging black protest theatre in the 1980s that long-held assumptions also had to be challenged, dismissed or re-calibrated.

“Their ingrained Western orientation in high and popular arts meant that arts journalists found it difficult, if not impossible, to not regard what they identified as African art as unknown and inferior.”

The ambiguity that journalists experienced towards protest theatre during Apartheid – that it was valuable only if it was also considered to be good art – also played a critical role in the discourses of the 1990s, writes Bothma.

Later, after 1994, these discourses were replaced with a preoccupation with the “Africanisation” of society, which was then usurped by an increasing focus on “identity politics.”

There is much to absorb in Bothma’s thesis, and it will be of particular interest to those who are attempting to reshape the current media landscape, if only as a lesson in what not to do and that one day, someone will come along and might ask: “Pray tell, what did you do while Nkandla rose in the valley?”

Bothma concludes his book with the suggestion that an entirely new intellectual framework for arts journalism in South Africa is still required.

That Bothma believes that arts journalism – as it once existed – still exists in contemporary South Africa is open to debate. There are sadly very few spaces left in the mainstream print media for considered and in-depth arts reporting and critique. Most dailies today have flimsy “entertainment” sections with few permanent staff assigned exclusively to seriously evaluating the work of contemporary South African artists working in all genres. In that sense, Bothma’s book provides a view of a bygone era in more ways than one. DM