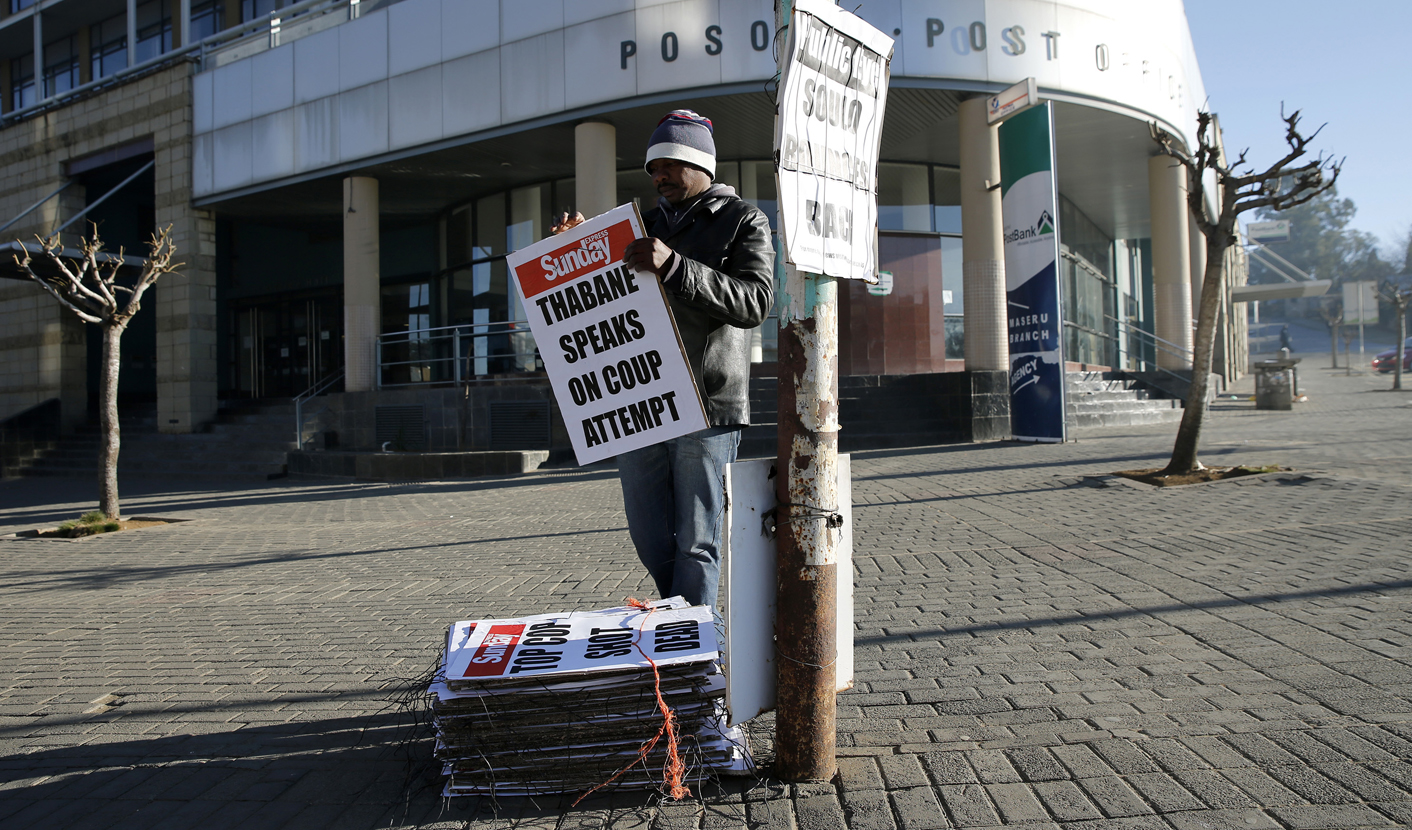 It’s election time in Lesotho – earlier than scheduled, and in the midst of simmering tensions between all of the major political players. The Mountain Kingdom needs a fresh start, but is this really it? By SIMON ALLISON for ISS Today.

On Saturday 28 February, the people of Lesotho will head to the polls. The national election is being held two years earlier than originally planned – sadly not because citizens of the mountain kingdom are so eager to exercise their democratic privileges, but because their democracy is failing and urgently needs a fresh start.

Tensions that had been simmering within the ruling coalition exploded into the open in August last year, when a component of the army – under renegade Lieutenant-General Tlali Kamoli – forcibly occupied police stations in Maseru, killing one policeman in the process. Fearing a coup, and for his own life, Prime Minister Thomas Thabane fled across the border into South Africa. Kamoli is now in exile as part of a Southern African Development Community (SADC) deal, along with his would-be successor and the police chief.

The dramatic scenes on the streets of the capital were the culmination of months of discord among Lesotho’s major political parties. Thabane and his All Basotho Congress (ABC) were struggling to keep his governing coalition together, not helped by an anti-corruption drive that seemed to ensnare only political rivals. The Lesotho Congress for Democracy (LCD) led by Deputy Prime Minister Mothetjoa Metsing – who also faces corruption charges – lobbied for more power within the coalition, and when that failed Metsing starting flirting with the opposition. The opposition Democratic Congress (DC) party, led by former Prime Minister Phakalitha Mosisili, the elder statesman of Basotho politics, was quietly undermining the government and allegedly cultivating links with unhappy army officers.

Things got so bad and Parliament so unwieldy that King Letsie III eventually acceded to the prime minister’s request to suspend Parliament. This was an unusual step for a monarch who prefers to stay out of politics (publicly, at least). But the suspension only inflamed tensions, which eventually boiled over into the army – supposedly aligned with the DC and LCD – assault on police stations.

At this point, and again at the request of the prime minister, South Africa stepped in with a mandate from SADC. Lesotho is an important strategic asset for South Africa because of its water supply. The South African-led construction of the Lesotho Highlands Water Project is a vital component of it’s future water security, and Pretoria needs to maintain stability in its tiny neighbour.

To do so, it sent in the big guns: not literally, this time (unlike the botched 1998 military intervention), but in the form of Deputy President Cyril Ramaphosa, who forced the squabbling politicians around the negotiating table and got them to commit to a mediated settlement. The South African police was also deployed to maintain order and special forces called on to protect politicians. Officers from Namibia and Zimbabwe were later deployed as part of the SADC mission.

All of these developments lead us to the early election, which was the most significant clause of that settlement. Not a lot has changed in the interim. In the absence of a functional Parliament, Lesotho has stagnated, and Thabane’s administration has done little more than go through the motions. Worse, as the Basotho contemplate where to mark their ballot, their choices are depressingly familiar.

Sure enough, Thabane, Metsing and Mosisili are the main contenders, despite having led Lesotho to the brink once already. To make things worse, Thabane and Mosisili’s parties are offshoots of the LCD – effectively different sides of the same dysfunctional coin, all of whom have a long track record of failing Lesotho’s citizens.

‘On the list of world’s lowest life expectancy rates, Lesotho is number seven,’ observes Michael J Jordan, the only Western correspondent living in the country. According to the World Health Organisation, that life expectancy is just 51 years. It shouldn’t be so low. The six countries worse than Lesotho – including Somalia, the Democratic Republic of Congo and the Central African Republic – are all considered low-income countries, and are either enduring or recovering from conflict. Lesotho, on the other hand, is a relatively peaceful lower middle-income country.

‘So you can make the argument that no one in the world is doing less with more than Lesotho’s leadership,’ says Jordan. ‘They can’t cry poverty, because according to the economic figures you have an advantage over many other countries – but you are doing less than others, in terms of even keeping people alive. It’s a fascinating anthropological question: why do the Basotho leaders care so little for their own people?’

Despite this, the electoral maths still favours the architect of Lesotho’s social and economic malaise, Mosisili, who was prime minister for 14 years. Although he won the majority of the vote in 2012, he was outmanoeuvred by the coalition of the ABC, LCD and Basotho National Party. This time, however, Mosisili’s DC and the LCD have formed an alliance, meaning that even if Mosisili does not win outright, he is almost certain to lead a coalition government. And Mosisili, seasoned politician that he is, has run the best campaign – and done the best job of explaining the political uncertainty in his favour. ‘Mosisili has won the public relations battle,’ says Dimpho Motsamai, a researcher at the Institute for Security Studies.

Motsamai doesn’t think that the elections are a panacea to Lesotho’s problems, however. ‘[Post-election stability] will depend on three factors,’ she said. ‘The first is the acceptance of the outcome by all the parties. The second is the result, and whether the result will produce a decisive win, like in 2007, or a hung parliament like in 2012. The 2012 scenario of alliances and coalition formation would then repeat itself… The third factor is the relationship between the incoming administration and the security apparatus.’

While acknowledging the positive short-term impact of the SADC intervention, Motsamai argues that the regional body could have done more to ensure that the new administration starts off on the right track. ‘There is no SADC position on the attempted coup. That’s a problem, because it emboldens the alleged orchestrators and defers addressing the security conundrum to the new government, which might not be impartial,’ she says.

The failure to address the security question could yet haunt these polls, with elements of the Lesotho Defence Force rumoured to be preparing to patrol streets and polling stations on election day – an intimidating presence given the army’s perceived support for Mosisili. Whatever does happen on Saturday, and whatever the results of the poll, it seems unlikely that this is the fresh start that Lesotho really needs. DM

This feature was first published on ISS Today, a publication of the Institute for Security Studies.

Photo:A worker hangs posters displaying newspaper headlines, in the capital Maseru August 31, 2014. Lesotho’s deputy prime minister, Mothetjoa Metsing, is in charge of government in the absence of the premier, a government minister said on Sunday, a day after Prime Minister Thomas Thabane accused the military of staging a coup. REUTERS/Siphiwe Sibeko