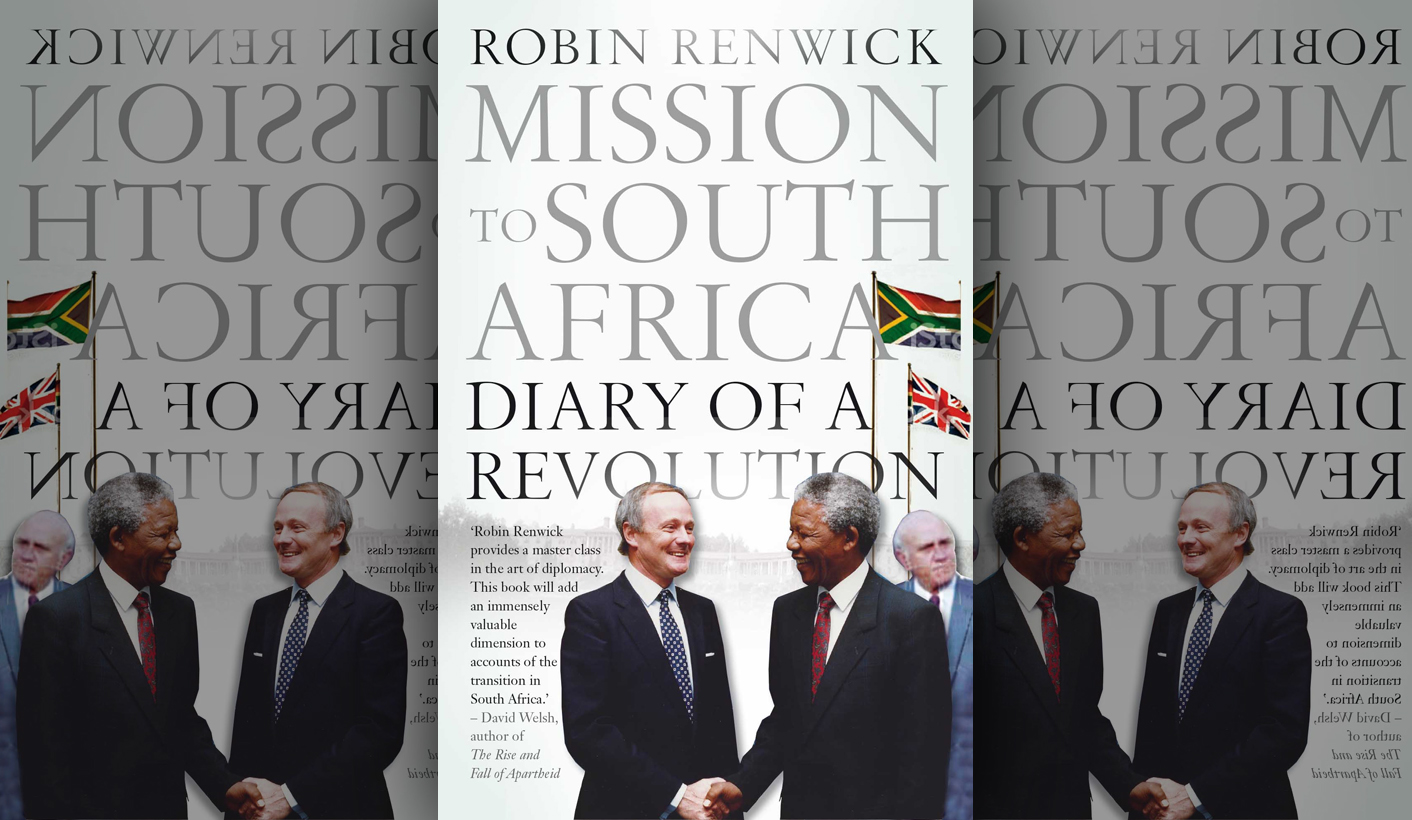 Before the rest of us get to read the stuff that makes headlines (and later history) there are pragmatic movers and shakers who work behind the behind the scenes of great historical events. Lord Renwick of Clifton, British Ambassador to South Africa during a critical period in the country’s transition from Apartheid state to democracy, engaged with key players of the time, from Botha to Mandela, and everyone who was anyone in between. He has just published an engaging memoir of the times. By MARIANNE THAMM.

As time passes, what we come to know as history is bent and shaped through the fractured lens of remembrance and hindsight. How we interpret events depends, of course, on where we stand – in time and ideologically – and in looking back we collate and collect various strands and shreds of the narrative to begin piecing together an ever-growing and evolving bigger picture.

Mission to South Africa – Diary of a Revolution (Jonathan Ball Publishers) is Robin Renwick’s contribution to the ongoing excavation of our recent history. As Ambassador to South Africa between 1987 and 1991 and dispatched to the country by Margaret Thatcher, Renwick was instrumental in lubricating and facilitating relationships between Britain and South Africa, including the then hard-line Apartheid government of PW Botha as well as leaders of the ANC, in exile, incarcerated and active on the ground.

Renwick’s knowledge of and experience in Africa is considerable. He was not only an advisor to Lord Soams, the last governor of Rhodesia, but also Lord Carrington during the Lancaster House talks which ended white rule in that country.

In the prologue to his “diary”, for that is what it is – a compendium of notes and recollections taken from his personal annotations, diplomatic dispatches as well as declassified communications between Thatcher and Apartheid leaders – Renwick briefly sets out the path to the Zimbabwean elections and independence.

It is interesting to mention here that a few years ago, during a rare and largely unedited interview with Dali Tambo for one of his People of the South episodes, Mugabe waxed lyrical about Thatcher. Mugabe, himself a conservative who enjoys dressing in Savile Row suits, declared his enduring respect and admiration for the Iron Lady. His contempt for the British Labour Party under Tony Blair in particular, was explicit and still visible as he thumped the armrests of his chair berating the party for reneging on promises made.

Mugabe said something along the lines that Thatcher was a leader he could trust and that he admired the Conservatives as they would not have betrayed agreements made during Lancaster House, as the Labour Party later did, precipitating the political crisis in that country.

Chapter One of Renwick’s memoir begins in July 1987 when he is sent to South Africa where, he writes, Thatcher had wanted “to see us playing a more activist role than the embassy hitherto had done, having been encouraged by the Foreign Office to engage in her least favourite activity – damage limitation”.

Thatcher, he writes, had found it frustrating that Britain had so little apparent influence on the regime.

Of course Margaret Thatcher’s role, particularly in relation to the call for blanket sanctions on Apartheid South Africa has been a controversial one. While the Conservative British government had indeed imposed military, nuclear, oil and sports sanctions, Thatcher was opposed to “blanket sanctions” which, says Renwick, “in her opinion would further reinforce the siege mentality of the Afrikaners as well as destroy the livelihoods of large numbers of black South Africans.”

Renwick’s book reads with the sense of urgency and agility of a man on a mission and who interacted personally with some of the country’s most unsavoury individuals, as well as some of its greatest, including Nelson Mandela. The immediacy of the tone is of course due to the nature of the massive political changes that were embryonic but soon to grow into a fully-fledged “revolution”. His extraordinary flair for diplomacy and his mastery of pragmatic realpolitik is admirable and makes for an intimate insider account.

It is the nature of memory and recollection that with time, the nuances and particular depths of historical figures or epochs are often rendered faint and dim. Often leaders, particularly those who become or have been influential players on an international stage, begin to be carved in granite, presented in the popular imagination in uni-dimensional, black and white certainties.

Margaret Thatcher remains, to an extent, an enduring object of derision and scorn to the left. She has been charged with supporting the Apartheid regime and Renwick attempts here to correct the perception, showing clearly that Thatcher adopted a particular strategy to end it.

Another “myth” Renwick attempts to correct is that Thatcher had labelled Mandela a “terrorist”. While she did not, she did regard the ANC as “a typical terrorist organisation” in relation to its threats towards British companies investing in South Africa back then. There would be those who would not find the explanation satisfying. If Mandela’s entire being were indivisible from his organisation, the ANC, then it could be read that in terming the liberation movement “terrorist”, she would have indirectly labeled him as well.

Be that as it may, Renwick’s friendship with Mandela brought him into close proximity with the man in all his pragmatic wisdom. While Mandela often delivered fiery speeches written by the NEC, in private he was much more politically flexible. Mandela understood the need to appease a constituency in particularly delicate and explosive circumstances and he navigated these challenges like a true statesman.

Renwick writes lovingly about Mandela’s extraordinary ability to co-opt individuals, including Renwick, as well as his attempt to do so with Thatcher.

In Mission to South Africa – Dairy of a Revolution, Renwick renders the reader a “fly on the wall” to the many significant meetings and hugely important behind-the-scenes deliberations. His unique ringside seat to history – albeit one representing what many would view “Western Imperialist” interests – is enlightening nonetheless. The book is a welcome addition to any library of the ever-growing list of publications scooping the individuals, details and historical twists and turns of our recent life and times. DM